Samuel Taylor Coleridge, an English poet and philosopher, was born on 21st October 1772 in the small town of Ottery St Mary, Devon. One of his better known shorter poems, Kubla Khan – which is said to be a fragment of a much longer piece, is supposed to have been written after reading an early traveller’s account of Kublai Khan’s capital Xanadu, now a UNESCO World Heritage Site. 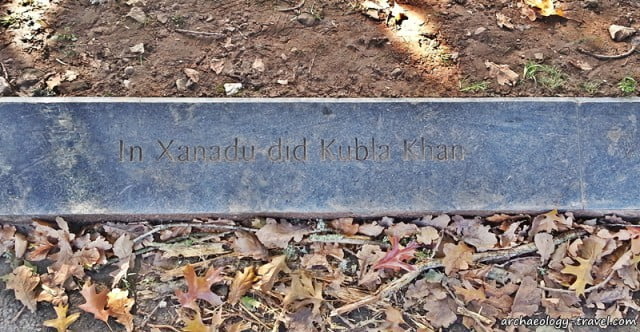 Wondering through the public park in Ottery St Mary on a crisp autumn morning I noticed the marble curb stones at the edge of the path were inscribed. Not recognising the verse I back-tracked to where the engraved text began and immediately recognised what is surely one of the most well known opening lines in English poetry. The inscription on the marble is Coleridge’s poem Kubla Khan: a Vision in a Dream. I could not help thinking that this quiet little park is so far removed from (what is now the archaeological site of) Xanadu in China. The connection between these two distant and very different places is facilitated by Coleridge’s literary genius, as it was here in this rural Devon town that the Romantic poet was born. 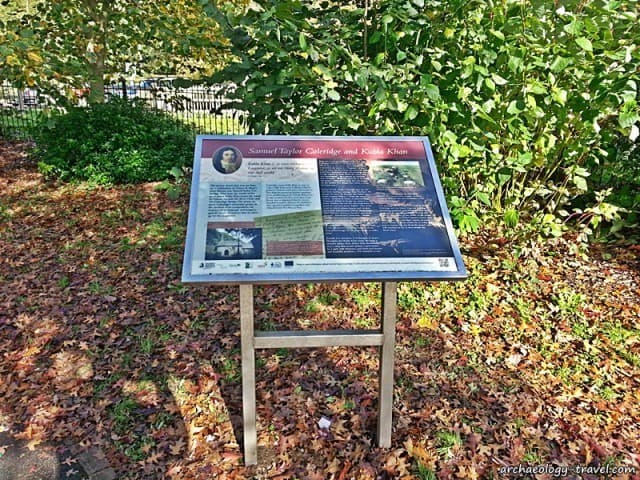 On the Coleridge Heritage Trail in Ottery St Mary. 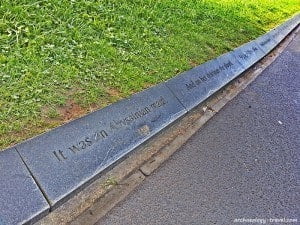 “It was an Abyssinian maid, and on her dulcimer she play’d … “

Interpreting the preface to the published Kubla Khan, it is generally accepted that the poem was written following a vivid dream brought on when Coleridge fell asleep under the influence of opium while reading a travel book by Samuel Purchas. The book, entitled Purchas His Pilgrimage: or Relations of the World and the Religions observed in all Ages and Places discovered, from the Creation unto this Present (1613), contains stories and accounts of exotic places as told by sailors and other travellers to distant lands. One of these accounts is based on Marco Polo’s personal account of Xanadu:

In Xandu did Cublai Can build a stately Pallace, encompassing sixteen miles of plaine ground with a wall, wherein are fertile Meddowes, pleasant Springs, delightfull streames, and all sorts of beasts of chase and game, and in the middest thereof a sumpuous house of pleasure, which may be moved from place to place.

Although some challenge whether Coleridge actually did fall asleep while reading this description in Purchas’s volume, it is accepted he was addicted to opium, which is what induced the vivid imagery in the poem. As fantastical as Kubla Khan is, Xanadu and the Kublai Khan did exist. While Coleridge may have made Xanadu well known, the city has always had a great political and religious significance.

The Archaeological Site of Xanadu

The archaeological site of Xanadu.

Xanadu was Kublai Khan’s first capital during the earlier years of the Yuan Dynasty (1271 – 1368). Marco Polo visited the city around 1275, but it was destroyed by the rulers of the succeeding Ming Dynasty in 1369. British visitors to the site towards the end of the 19th century report that the remains of temples could still be seen. Sometime after this the inhabitants of the nearby town of Dolon Nor removed stone from the site for use in building their own houses; and decorated stone can still be seen in the buildings there.

By the 1990s when the first archaeological investigations of the site began, the walls and temples had been reduced to grassy mounds. Since then, however, the site has been extensively excavated and over 1,000 buildings have been unearthed. In 2012 Xanadu, or more correctly Shàngdū, was added to the list of UNESCO World Heritage Sites.

The historical significance of Xanadu is immense. For it was here that the Mongol ruler Kublai Khan founded the Yuan Dynasty and ruled over China for close to 100 years. The Yuan dynasty was founded on the fusion of farming Han Chinese peoples with more nomadic Mongolian communities. 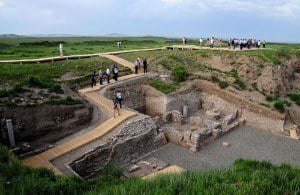 Kublai Khan had his Chinese advisor Liu Bingzhdong oversee the construction of the city, which was built between 1252 and 1256 and covered an area of about 4.2 square kilometres. The substantial walls that surround the inner Palace City, which in turn surround the Imperial City, in turn surround the Outer City can be seen in the Google map below (zoom in to get a ‘bird’s eye view’ of the surviving architectural features). This unique urban layout has elements that are typical of central China in the 13th century, while incorporating gardens and open spaces required for Mongolian nomadic lifestyles. The coming together of two different lifestyles at Xanadu brought together the equally different religious practices of Taoism and Buddhism. Consequently, royal palaces, tombs and farming existed alongside nomadic encampments, temples and hunting. And it was from Xanadu that Tibetan Buddhism spread throughout north eastern Asia.

Thanks to the likes of Coleridge, Xanadu has come to be thought of as the ultimate pleasure palace in Western imagination. If this was the case when Marco Polo visited, it is certainly not the case today.

The archaeological site of Xanadu officially opened to the public on 11 July 2011. While the Mongolian grasslands may have encroached upon the ruins, it is still an interesting place to visit. The better preserved sections of the extensive concentric walls surrounding the three components of the ancient capital have been stabilised, and boardwalks installed at some of the excavated buildings to enable public access. Given the expanse of the site, golf buggies are used to take visitors to the best features. More photographs of the site can be seen on two different pages of the China Daily English news website, click here and here (but do not forget to zoom in on Xanadu in the Google map below).

Over 60,000 objects, many of which were recovered during excavations at Xanadu, reveal the ancient splendours of the Yuan Empire at the nearby Xanadu museum. This impressive collection of artefacts includes ceramics, bronze wares, carved jade sculptures, wooden weapons and ancient coins, and covers the various aspects of life and ritual of the Han Chinese and nomadic Mongolian peoples. One of many highlights of the museum is a detailed model of the historic city.

Where is Xanadu, or Shàngdū?

For many, Xanadu conjures up a distant, far off place, an image that certainly seems to have seduced the Romantic English poet, even if it was with the help of opium. This may have been the case in Marco Polo’s times but it is not so today – the archaeological site and museum of Xanada are both now relatively easy to get to, even if you are not on an organised tour. The place you need to get to first is Hohhot, the capital of the Inner Mongolian Autonomous Region in North China. From the bus station here you then take a bus to Lánqí, a journey that lasts between six and seven hours. The Xanadu Museum is in Lánqí, and a short taxi ride will get you out of the town and on to the Mongolian plains where the archaeological site is.

If Xanadu is still a far off, distant place for you, explore Samuel Taylor Coleridge’s Ottery St Mary instead. A fascinating Heritage Trail guides visitors through the historic Devon town and countryside, with good opportunities to stop here and there and enjoy a typical Devon cream tea.