Whether you are staying in Luxor for a few days or only visiting for the day, keep the artisans’ village at Deir el-Medina high on your list. This is where the men who worked on the tombs in the Valley of Kings lived. The stone-cutters, the plasterers and decorator. Today you can follow paths to through the ancient village and go inside the Christianised Temple of Hathor that became a monastery. Take a break from the heat and enter some of the tombs to see the very well preserved paintings. An hour or two is all you need. 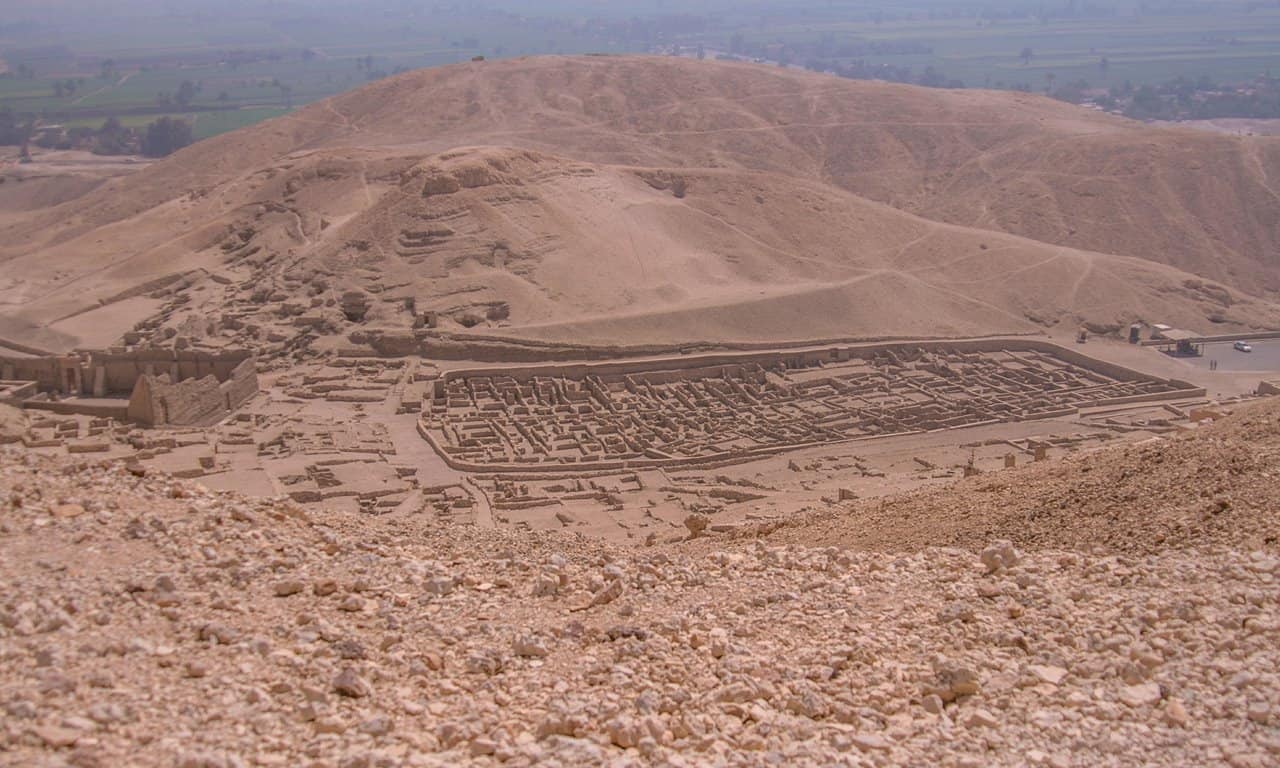 The village of Deir el-Medina and the Temple of Hathor from above. Photograph © Steve F-E-Cameron/Wikimedia

Anyone with the slightest interest in ancient Egypt has heard of the Valley of the Kings. It was in tombs cut into the sides of the valley that Pharaohs and powerful nobles between the 16th and 11th centuries BC were buried. Although there are 63 known tombs, the most well known is that of Tutankhamun. Not surprisingly then, the Valley of the Kings is top of most if not all lists of attractions to visit in Luxor, along with the many temples on both the east and west bank of the Nile. But what of the people who created these tombs? Where did they live, and where were they laid to rest?

Just over the ridge from the Valley of the Kings, and within walking distance, is the ruined village of what is today called Deir el-Medina. The remains of this modest village once housed about 68 households, the inhabitants of which were a mixed community of Egyptians, Nubians and Asiatics. The men were employed as stone-cutters, plasterers, water-carriers and decorators, as well as administrators of the nearby royal tombs and temples.

Deir el-Medina is a must for a number of reasons. Here there are the excavated remains of an ancient workers village, a village that is relatively well preserved. So you get to see a different side of ancient Egypt, a different image to the one we are used to that features Pharaohs and their extravagant monuments. Also, because this site does not always feature on the itineraries of tours taking in the sites of Luxor as do the Valley of the Kings and the Luxor temples, your visit can be a much more enjoyable experience (try to avoid the midday, particularly in summer – as it can be very hot). Even though there may not be the grandeur of the Royal tombs over the hill or the majesty of the temples, there really is much of interest here. Looking north over the village ruins, towards the temple/church.

The main feature of the site are the remains of the village (above), the excavated low walls of the various houses in which the workmen and their families lived. At the opposite end of the village to where the car park is you will find the remains of what was a temple dedicated to Hathor. During the Christian era the temple became a monastery, hence the Arabic name Deir el-Medina, Monastery of the Town. For the earlier Egyptian workers the town was called Set Maat, or the Place of Truth. Entrance to the Christianised temple of Hathor.

Also open to visitors are the tombs of some of the artisans, in the adjacent necropolis – where tombs were cut into the side of the hill surrounding the village. Remember, the inhabitants of Deir el-Medina were the artisans behind the making of the nearby royal tombs, so these tombs are not to be sneezed at – the painted walls may not be as vast as those in the Valley of the Kings, but they are every bit as spectacular – as the photographs below show.

Do not miss the tomb of Sennedjem. The pyramid marking its entrance is reconstructed, but the brightly coloured wall paintings are original. Looking south over the village (in the foreground), with the necropolis on the side of the hill and the pyramid-tomb far upper right. The reconstructed pyramid-tomb of Sennedjem. Where is Deir el-Medina

Deir el-Medina is on the west bank of the Nile River, on the outskirts of Luxor. Most of the hotels are on the east bank of the Nile, but getting to the archaeological site is easy. Private tours/taxis can be organised from most hotels, or you could cross the river in a felucca (highly recommended) and then take a taxi.