Re-enactments are a popular form of entertainment at archaeological sites. And no where is this more so than at some of the English Heritage sites along Hadrian’s Wall. A popular, and World renowned group who often perform here is the Ermine Street Guard. This group is particularly well known for their meticulous recreations of Roman military dress and equipment, which are based on archaeological evidence. And in so doing they have added much to our understanding of Roman Military. For instance, we know how the armour worn by Roman Legionaries, the lorica segmentata, worked based on an archaeological find at the Roman Town of Coria (the so-called Corbridge Hoard) and because of the reconstructions by the Ermine Street Guard. 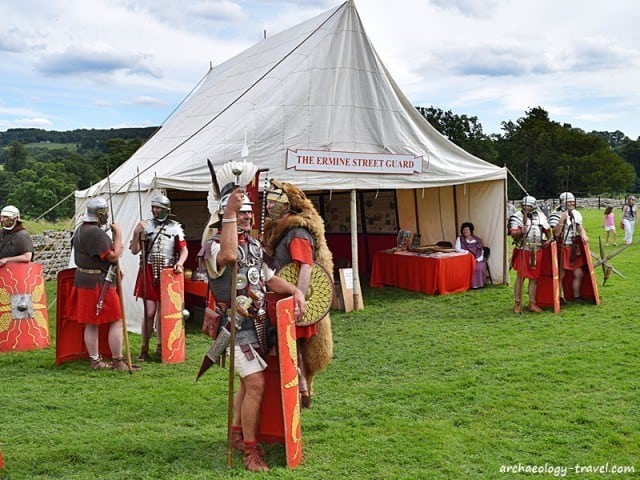 After ten days visiting as many points of interest on Hadrian’s Wall as I could, I then had the surprising pleasure of seeing the Ermine Street Guard in action at Chesters Roman Fort. I say surprising because I have up until now studiously avoided the re-enactment scene. Archaeologists have been known to talk about re-enactors as the archaeological equivalent of train-spotters.

The main focus of the event I observed was a demonstration of Roman military drill that had everyone’s attention. At the edge of makeshift ‘arena’ in amongst the ruins of Chesters Roman Fort the Legionary and Auxillary soldiers had pitched their ‘camp’. Different aspects of the life of a Roman soldier attracted different people. Younger children loved the tents, ‘older boys’ were definitely more interested in the armour and weaponry. But my favourite was the young child who was fascinated by the quern stones, which is what would have been used to grind wheat to make flour. He took great pride in showing his mum the flour he had made. Just look at his face, flour everywhere! 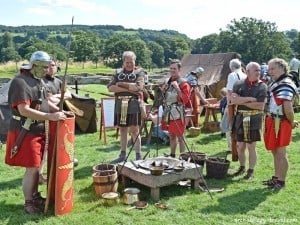 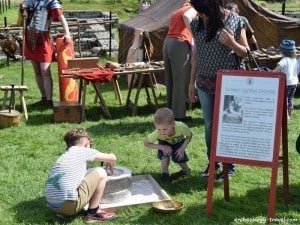 The Ermine Street Guard was founded in 1972 after a few men took part in a village pageant representing local history. Since then, these founding members worked closely with archaeologists and have gone on to become one of the World’s most respected re-enactment societies, captivating audiences of all ages throughout Europe. Although they are obviously better known for their public entertainment and education, their meticulous attention to detail in their work alongside archaeologists has done much to further our understanding Roman military life (Read more about the organisation here.) And nowhere is this better to experience first-hand than on Hadrian’s Wall.

Lorica Segmentata
Perhaps the most striking element of the Roman Legionaries dress is the lorica segmentata; the armour worn by Legionaries. This type of body armour is made up of hardened metal plates. These plates were arranged horizontally and overlapped downwards so that they allowed both protection and flexibility to the soldier.

The photographs below show a front and rear view of the lorica segmentata. (Click on the images to see a larger image and the armour in greater detail.) 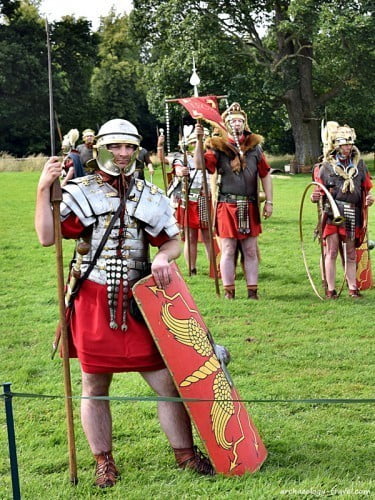 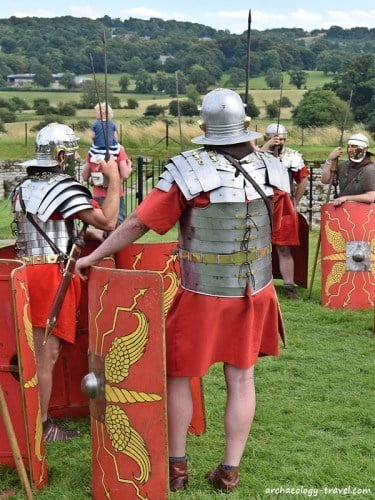 Reconstructions of this armour as seen on the Roman Legionaries of the Ermine Street Guard are based on years of research. Mike Bishop’s Lorica Segmentata: A Handbook of Articulated Roman Plate Armour, which is available to read online here, has a detailed account of the history of this research.

Early archaeological finds from Carnuntum (Austria) and Newstead (Scotland), for example, gave us only a limited understanding. This was largely because of the poor preservation of the artefacts recovered from these sites. Other scholars turned to contemporary imagery of this unique armour, principally the carved relief on Trajan’s Column. But all reconstructions up until the second half of the twentieth century are incomplete and somewhat unsatisfactory.

All this would change with the discovery the Corbridge Hoard in the north of England. 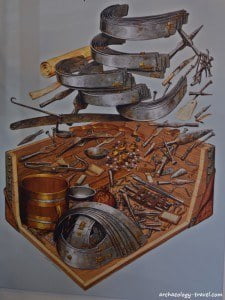 In 1964, archaeologists excavating at the Roman town in Corbridge came across a Roman time capsule in the form of an iron-bound chest made of wood that was covered in leather. The range of objects in the box and their state of preservation makes this one of the most remarkable Roman finds of the twentieth century. The diagram here shows an artist’s impression of what that hoard might have looked like when all the items were placed in the chest.

The preservation of the chest and its contents is truly exceptional, which is a result of the mineralisation caused by the rusting of metal objects. The taphonomic conditions within the box were such that even the rope that was used to bundle up spearheads has preserved (see the photograph below), along with other similarly fragile materials such as feathers – possibly the feathered plumes of a helmet. Other artefacts include artillery bolts, a sword scabbard; numerous tools and implements associated with carpentry, a small wooden bucket, wax writing tablets, and fragments of papyrus.

A full and fascinating account of the Corbridge Hoard, written by L Allason-Jones and M Bishop, has been published by English Heritage and is available to download here. 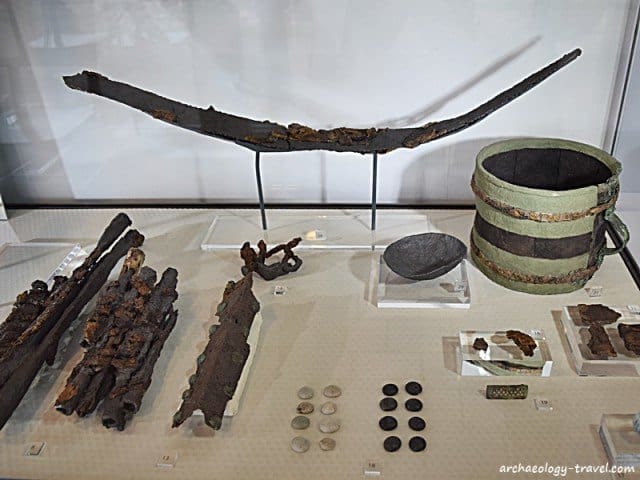 Part of the display of the Corbridge Hoard, including bundled spearheads (left), and iron bowl and a tankard (back right), glass gaming counters (front, centre) and a bow saw (back).

More excitingly, however, the chest also contained six upper and six lower mismatched, half-units of lorica segmentata. These well-preserved metal plates, which could represent as few as three full suits of armour or parts of twelve, have enabled scholars to finally work out how this type of Roman armour was put together. More specifically, it is the intricate designs on the surviving metal plates and the remarkable preservation of leather straps that has been crucial in helping scholars appreciate how the lorica segmentata was put together.

Based on his experience as an expert armourer, Russell Robinson was able to provide a much more plausible reconstruction of how the various parts of a lorica segmentata were put together. And it has been the reconstructions of this armour made by the Ermine Street Guard working with more recent research by archaeologists such as Mike Bishop that our understanding of this armour has increased. 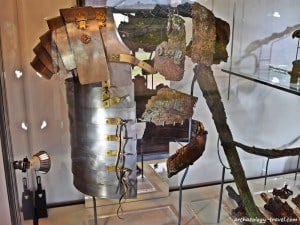 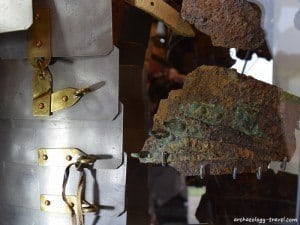 The two photographs above (click on them to see larger images) show a few of the metal plates as currently displayed in the onsite museum at Corbridge Roman Town. Here you can see the reconstructed plates alongside the archaeological plates. This spectacular display of only some of the objects found in the chest is enhanced with never-before seen film footage of the 1964 excavation of the hoard.

Although some of the items within the hoard have been instrumental in understanding Roman armour, the hoard still has a number of unanswered questions. We know the hoard was buried sometime between 122 AD and 138 next to the Commandant’s house of an early fort on the site of Coria. Who buried it and why they did so remains a mystery. The Corbridge Hoard is as enigmatic as the much later Elizabethan/Stuart Cheapside Hoard, found in the City of London.

[mappress mapid=”285″ width=”100%”]
The yellow marker pinpoints the approximate location of where the Corbridge Hoard was found. Hover your mouse over the other markers to see the identification of those features. Drag the yellow Pegman onto the map and blue spots will appear – place Pegman on those to see 3D photographs of the site from those points.

The Corbridge Hoard and the work of the Ermine Street Guard in collaboration with scholars with various expertise is an excellent example of how it is that our understanding of certain aspects of the past, in this case the military dress of Roman Legionaries, develops. Academic archaeologists are not the only group of people who enable us to understand and enjoy the pasts.