Surely one of the most remarkable Classical sculptures is the Farnese Bull. A massive sculpture in white marble that depicts the terrifying moment when two brothers tie a woman to a raging bull as punishment for the woman’s ill treatment of their mother. Now a main attraction in the Naples National Archaeological Museum, the sculpture was found in pieces during 16th century excavations at the Baths of Caracalla to find antiquities to decorate the Farnese family palazzo in Rome. 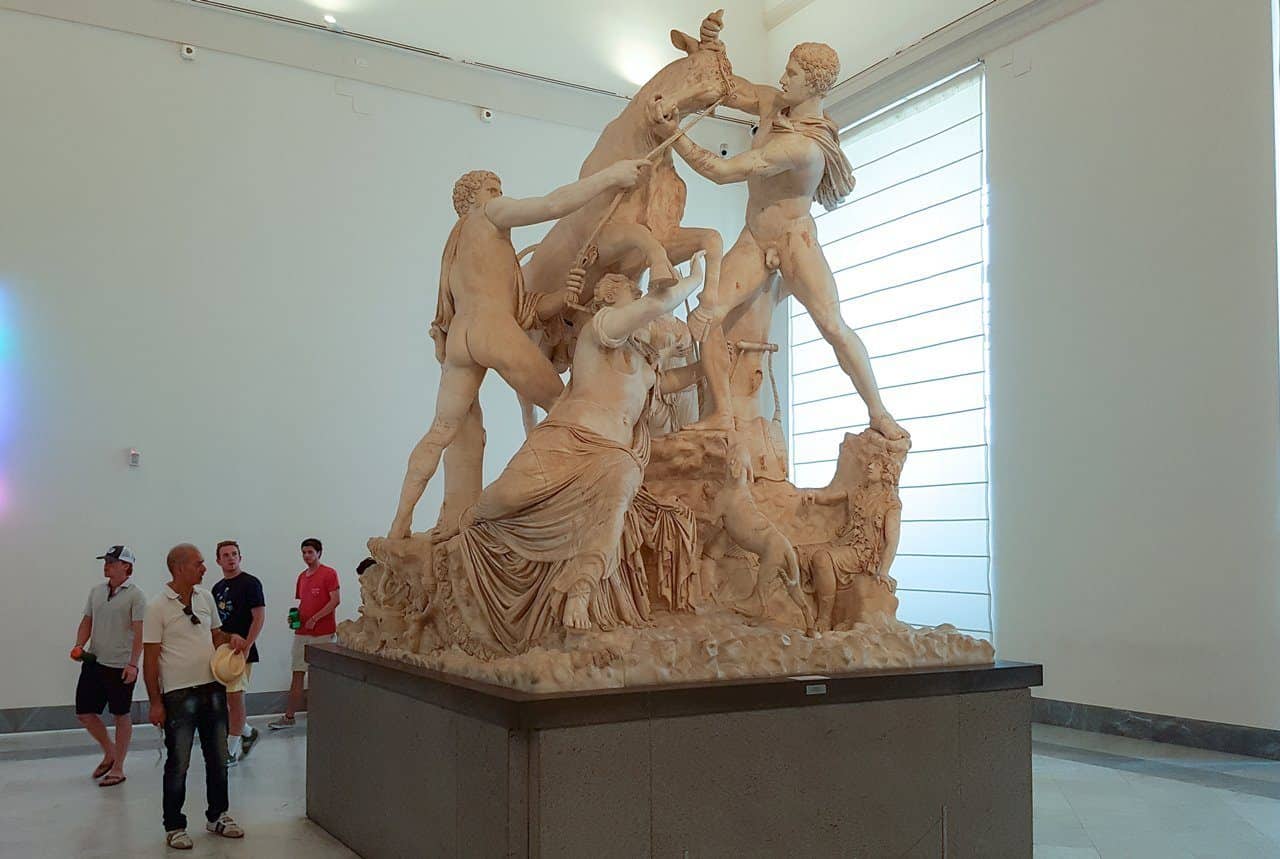 One of the most extraordinary features of this sculpture is not just the size (a little under four metres high, and a base three by three metres), but the fact that it was carved from a single block of marble. This ‘mountain of marble’ depicts an episode of a myth about Antiope – that is the punishment of Dirce. This is a frequently depicted mythological theme, also found in frescoes and on vases, mosaics and coins.

The Farnase Bull & the Myth of Antiope

Cutting a good myth short, Antiope was seduced by Zeus in the form of a Satyr. In shame she fled to King Epopeus of Sicyon, but was brought back by Lycus. On her way home she gave birth to twins, Amphion – who was son of Zeus – and Zethus – son of Epopeus. Both boys were left and raised by herdsmen, and Lycus gave Antiope to his wife Dirce, who persecuted her mercilessly. Antiope escaped and unknowingly found shelter where her two sons were living. What happens next is the subject of one of Euripides’ lost plays, Antiope.

At first Amphion and Zethus do not believe that she is their mother, and her pleas for sanctuary. When Dirce finds Antiope and orders her death, the shepherd who raised the twins convinces them that Antiope is their mother. Amphion and Zethus then kill Dirce by tying her to the horns of a bull; the subject of the Farnese Bull sculpture. At the centre of sculpture is the large bull, held by the horns of one of the brothers, the other attaches a rope to the animal’s head. Beneath the front legs of the raging bull is Dirce, pleading for her life. A shepherd looks on with his excited dog. Behind the scene stands Antiope, holding a thyrsus (a symbolic staff). 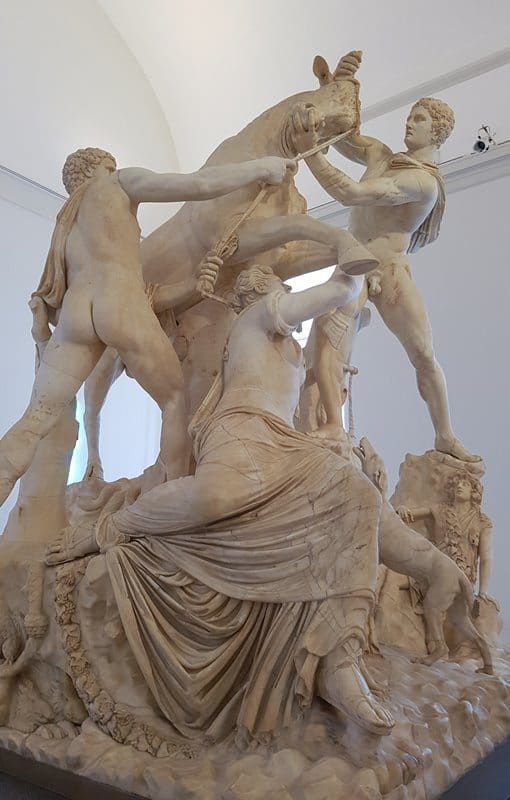 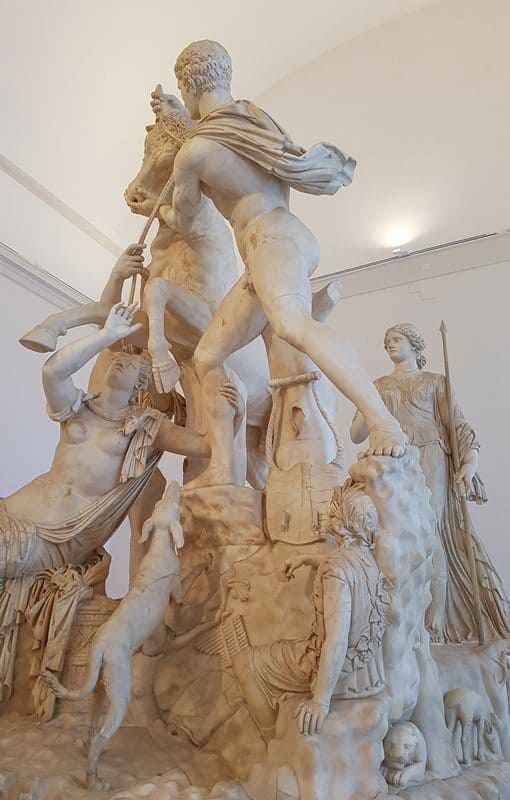 History of the Farnese Bull

Scholars of classical art are divided on the age of the Farnese Bull. Some think it is a Hellenistic original, while others suggest it is a Roman copy made specifically for the Baths of Caracalla, where the sculpture was found.

The site was known to be a source of ancient artefacts. And in 1545 the Pope Paul III commissioned new excavations in the hope of finding new artworks to decorate his family’s palazzo in Rome, the Palazzo Farnese. Fragments of numerous artworks were uncovered during the excavations in 1545 and 1546. The Farnese Bull was one of a few colossal statues recovered; another well known statue is a large than life representation of Hercules.

Through various means (purchases, inheritances, excavations), the Farnese family amassed what is one of the first collections of Greco-Roman artefacts. The sculptures from the Baths of Caracalla were just a part of that collection that were displayed in the Palazzo Farnese. Anthony Majanlahti has written a fascinating book, The Families Who Made Rome: A History and a Guide (2006), that explores the many popular tourist attractions in Rome today in the context of the powerful and rich families that were behind their creation (available on both amazon.com and amazon.co.uk)

The Farnese Collection moved from Rome to Naples, when the Farnese family lineage died out and their antiquities passed through marriage and inheritance to the King of Naples, Ferdinand IV. And it is in Naples that this wonderful collection has remained since, on display in the Naples National Archaeological Museum. The Farnese Bull, along with other pieces in the Farnese Collection, such as the Farnese Lar and Hercules at rest, are understandable highlights in the many galleries of the museum. This collection of statues is as grand as the bath house from which they came. And, if you have visited the Baths of Caracalla in Rome, you will certainly not want to miss these colossal statues.