As a professional archaeologist, I have been researching prehistoric art around the World since the early 1980s, including the Palaeolithic art of western Europe. I have been visiting the sites in France since 1989. In the second half of the 1990s I lead student fieldtrips to the Dordogne region, and since 2012 I have been sharing my knowledge and experiences by creating bespoke, private for clients from around the World. I offer three services for people wanting to visit the caves in France.

France is well known for its Stone Age cave art; those stunning images that were painted or engraved tens of thousands of years ago on the walls of limestone caves in the Dordogne and further south in the Midi-Pyrénées region and the Pyrénées mountains. The most famous of these caves is of course Lascaux, now closed to the public for conservation reasons. Today two replicas, Lascaux 2 and Lascaux 4, allow us to see the amazing imagery from this cave. And there are a number of other ‘original’ caves that are still accessible to the public that offer a wonderful opportunity to see first-hand some of the most spectacular prehistoric art in the World.

The map shows the location of the caves open to the public (red markers), as well as the museums (blue markers) that have collections and displays directly related to prehistoric cave art.

Create Your Own Itinerary

On Archaeology Travel, you will fill all the resources you require to create your own itinerary. Some of you will be interested in seeing as many of the caves as you can, you will find the Guide to Prehistoric Cave Art in France an invaluable place to start. This is the most comprehensive guide in English, each site that is open to the public is included, for which you will find a map, visiting information, and a link to the official website.

Having created a number of bespoke itineraries, I have published the following self-guided itinerary for you to take an adapt:

I’ve been using your website ‘archaeology-travel.com’ as a point of reference to plan a trip to the rock art caves in the south of France. It is an excellent website with great information (including getting tickets for Font de Gaume), and I am very glad I stumbled across it. Thank you very much!

Some people just do not have time to create their own itinerary, but would still prefer a self-guided holiday. Using my extensive experience visiting the prehistoric caves of France, I offer a service where you provide me with your requirements, and then with these details I create a bespoke itinerary. Because I am not available for tours of less than four days, this is also a perfect solution for those who only have a few days available to see as many sites as possible.

Using your travelling details I provide all the necessary information required from accommodation to where to go to see the best cave art sites. Included are GPS/SatNav details so you can not get lost, how to get tickets, which tickets can be purchased in advance (and how), when to visit the sites. Basically, I provide a very detailed itinerary with all the information you will require to enable you to self-guide yourself.

We had a wonderful time exploring the painted caves, greatly aided by your suggestions and guidance. It also helped our appreciation of the caves having read the books you recommended.

There is no set itinerary to this tour as all my tours of French cave art are bespoke – I create an itinerary based on what is important to you. Some people want to see as many cave art sites as they can within a set number of days, some want to add different archaeological sites and other attractions in the area – such as wine tasting and light sporting activities such as kayaking down the Dordogne River. Some clients combine seeing cave art sites for a few days with either the Neolithic sites of southern Brittany or the amazing Roman sites in Provence. You tell me what you want to see, and I create your itinerary.

The following are some suggestions on which to base your thinking: 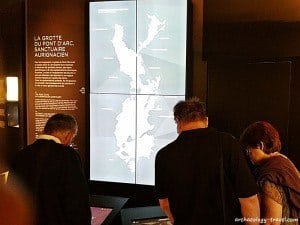 The interactive museum at La Grotte du Pont d’Arc is as outstanding as the replica of Chauvet itself.

For the ultimate Cave Art experience of France, I recommend a trip, over a minimum of nine days but 14 days is popular, that starts in Paris and the Musée d’Archéologie Nationale (France’s national archaeology museum), and ends in the south with a visit to the newly opened Grotte du Pont d’Arc – a replica of the recently discovered Chauvet. Starting in the south and ending in Paris is just as good – I have provided both. This is a particularly practicable tour because Paris and Marseilles have well connected international airports, making starting and finishing the tour hassle-free.

This tour in a nutshell: starting in Paris, we see blocks of carved limestone that were removed from Roc-aux-Sorciers. Heading south, depending on the length of the tour, we can stop at the replica of Roc-aux-Sorciers and then head to the Dordogne visiting such sites as Font de Gaume, Les Combarelles, Rouffignac and the replica of Lascaux. I recommend Les-Eyzies as a base for the Dordogne sites and from here the two must see sites in the Midi-Pyrénées, Pech Merle and Cougnac, are an easy day trip. From here we head to the Pyrénées for the spectacular site of Niaux. And then its over to the Ardeche to visit the replica of Chauvet.

As this tour inevitably passes through some of the best regions France has to offer, this tour can be customised to include other attractions that interest you. For example, travelling from the Midi-Pyrénées to the Pyrénées, a stop at the fortified Medieval city of Carcassonne is not only very easy but a slight detour I can thoroughly recommend. Similarly, travelling to or from the Pyrénées from or to the Ardeche and the replica of Grotte Chauvet passes by some of the best Roman sites in southern France.

SEVEN DAYS IN THE DORDOGNE 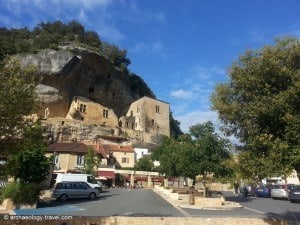 What was once the castle in Les Eyzies became the first site of the National Museum of Prehistory.

Certainly the most concentrated set of sites, and amongst the best cave art in France is in the Dordogne. More specifically, in the Vézére Valley. Here there are over 14 archaeological sites and 25 decorated caves on the UNESCO list of World Heritage sites. And a number of these are open to the public – definitely enough, with various museums and other interesting attractions in the area, to keep visitors busy for a week or more.

As well as visiting decorated caves, there are a few rock shelters that have extensive archaeological deposits. The excavation of these not only produced some of the exquisite pieces of portable art, animals carved in bone for example, has done much to formulate our understanding of the hunter-gatherers who lived in the area. Many of these can also be visited.

There are a number of charming towns and villages in the Vézére Valley, but my choice of base for exploring the archaeology and history of this area is without hesitation Les-Eyzies-de-Tayac. Les Eyzies is also a wonderfully picturesque town, and home to France’s national prehistory museum. Some cave art and related archaeological sites are within walking distance of the town, others are within easy reach. Pech Merle and Cougnac, two of the best cave art sites in the Midi-Pyrénées region, are both possible on a day-trip from Les Eyzies.

For a thorough exploration of the area, that can include more than just the Palaeolithic heritage, I recommend a seven day stay in the Les Eyzies. Getting to Les Eyzies is relatively easy. For guests who just take a seven day tour of Les Eyzies, I recommend arriving in Paris, and getting the train to Brive-La-Gaillard where we will meet. There is an airport just south of Brive that has a few flights (from Paris, London, Amsterdam and a few other destinations). Bordeaux, home to Musée d’Aquitaine – which has good cave art exhibitions, is another good place to start this tour.

Just wanted to thank you for the wonderful time I had on your tour. It was nice having my personal archaeologist to explain things, especially the French Guides. I enjoyed your company, especially during meals. Most tour guides ditch you at mealtimes, and I hate eating alone. Just got my French photos printed today, makes me nostalgic already.

Request a Quote for Your Private Guided Cave Art Tour

When is the best time to visit the prehistoric caves in France?
Although some of the caves are open all year round, for the best experience of the caves and those regions of France where they are located, I recommend the following months: May and June, and September and October.

Where are the best prehistoric caves in France?
As you can see from the map above, caves with prehistoric art are found in a number of different areas. The Dordogne, more specifically the Vézére Valley, has the largest concentration of sites open to the public. And there are also groups of must-see sites in the Lot (Pech Merle) and the Pyrénées. 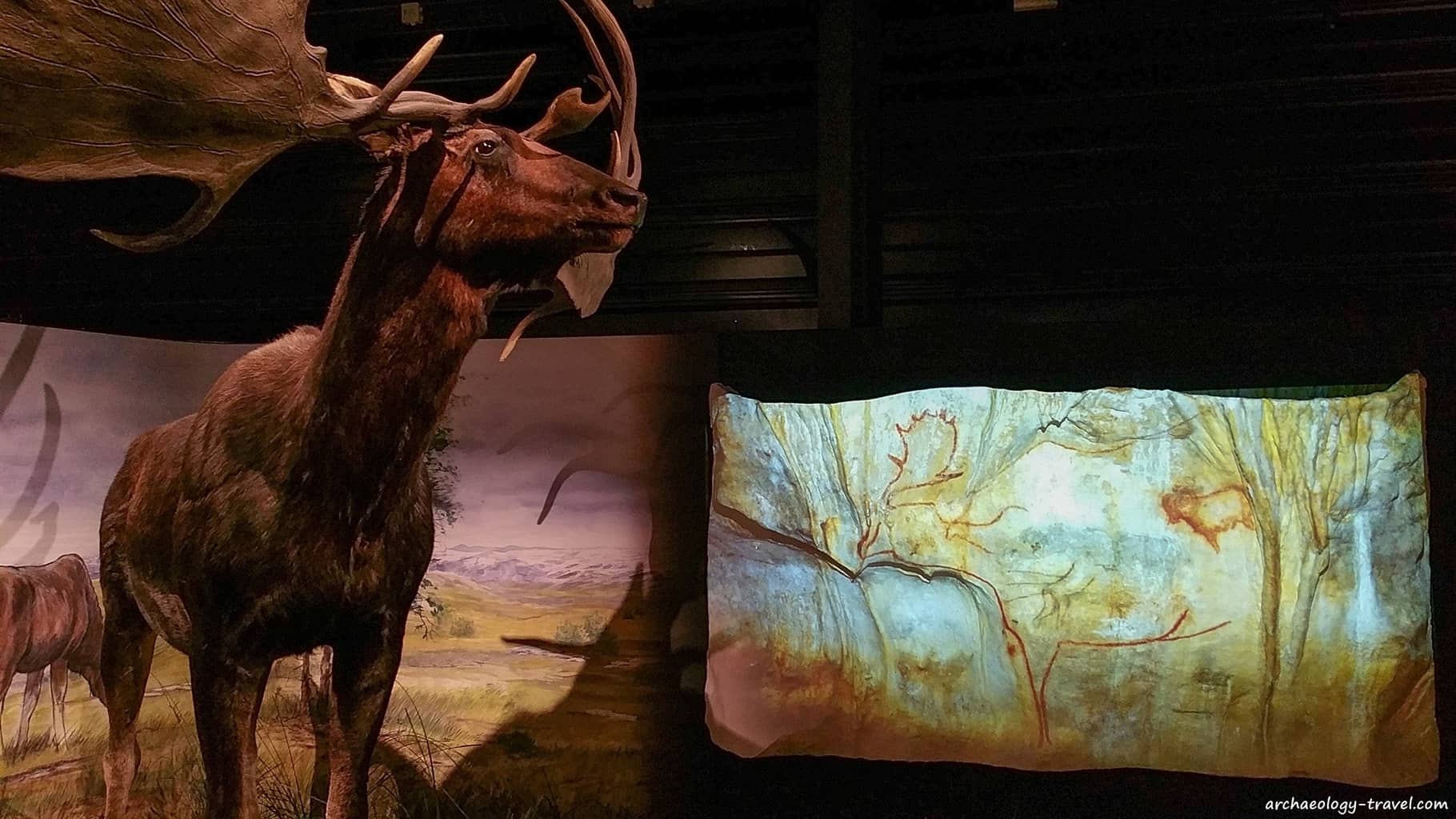 A megaloceros alongside a replica of paintings from Cougnac cave (Lot), in the Parc Pyreneen de l’ Art Prehistorique.
×