The Church of St George (or Ротонда „Свети Георги“ – Rotonda ‘Sveti Georgi’ in Bulgarian) is a red brick rotunda that is thought to be the oldest building in Sofia. The Early Christian church stands among the ruins of Roman buildings, including public buildings with hypocaust floors and a basilica, as well as a street.

Besides the excellent architectural preservation, the church is particularly well-known for the magnificent frescoes inside the central dome. In all there are five layers of frescoes, the earliest dating back to the 6th century – the latest as old as the 14th century. These frescoes were painted over during the Ottoman period when the church was converted into a mosque. 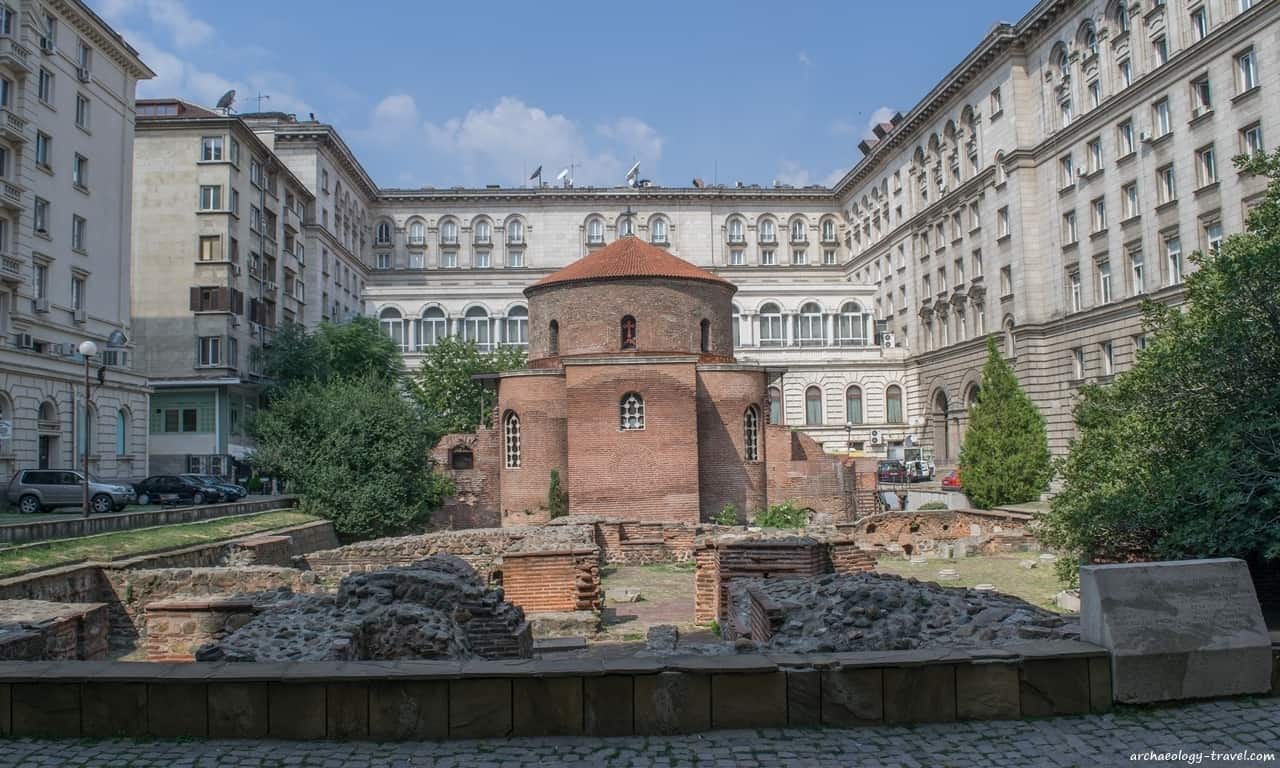 Initially built during the 4th century, on what is believed to have been the site of a pagan temple, the history of the church reflects the changing politics of the Balkan peninsular. Around 313 AD the Rotunda became a baptistery to handle the mass conversions to Christianity following the Edict of Milan and the legal status then afforded Christians in the Roman Empire. During the 6th century the baptistery was converted into a church, and it was then that the first frescoes were painted.

Sometime in the 16th century the church was converted into a Mosque, during Ottoman rule in Bulgaria. After Ottomans the building was all but ignored until the death of Alexander of Battenberg in 1893 when it was used as his temporary mausoleum. The first restoration work started in 1915: the minaret was destroyed, the interior plaster used to cover the Medieval frescoes was removed and the paintings cleaned. Weekday services were then resumed and are still performed today. 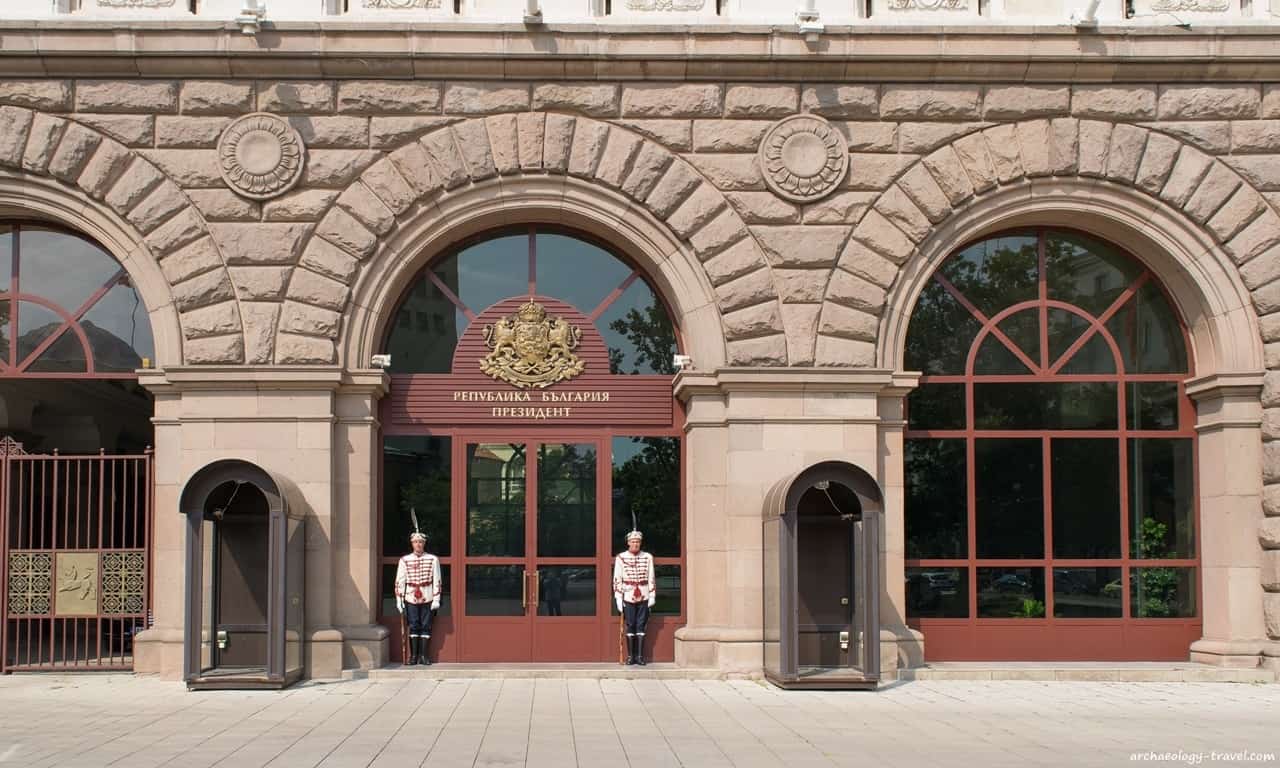 Today the church and the Roman ruins are in a large courtyard that is made up by the Bulgarian Presidency, the Ministry of Education, the luxury Sofia Hotel Balkan and other offices and businesses. Despite the high-level government presence, the courtyard is open to the public and you can take photographs. Enter the courtyard either through the alley between the Presidency and the Ministry of Education, or the entrance on Saborna Street. 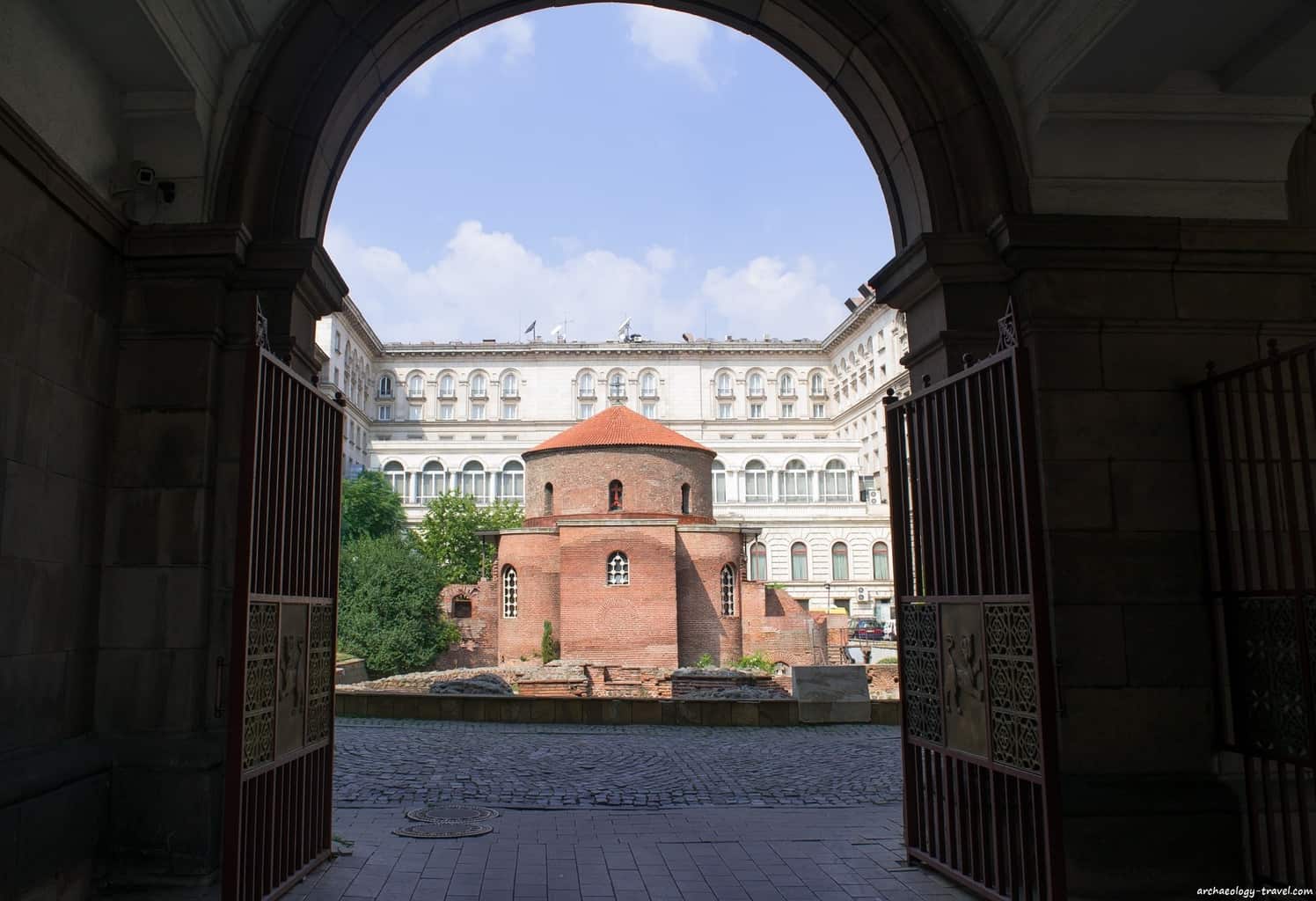 Walking through the alley between the Presidency and the Ministry of Education, the arches of the more modern building frame the Early Christian church that stands at the other end of the courtyard. 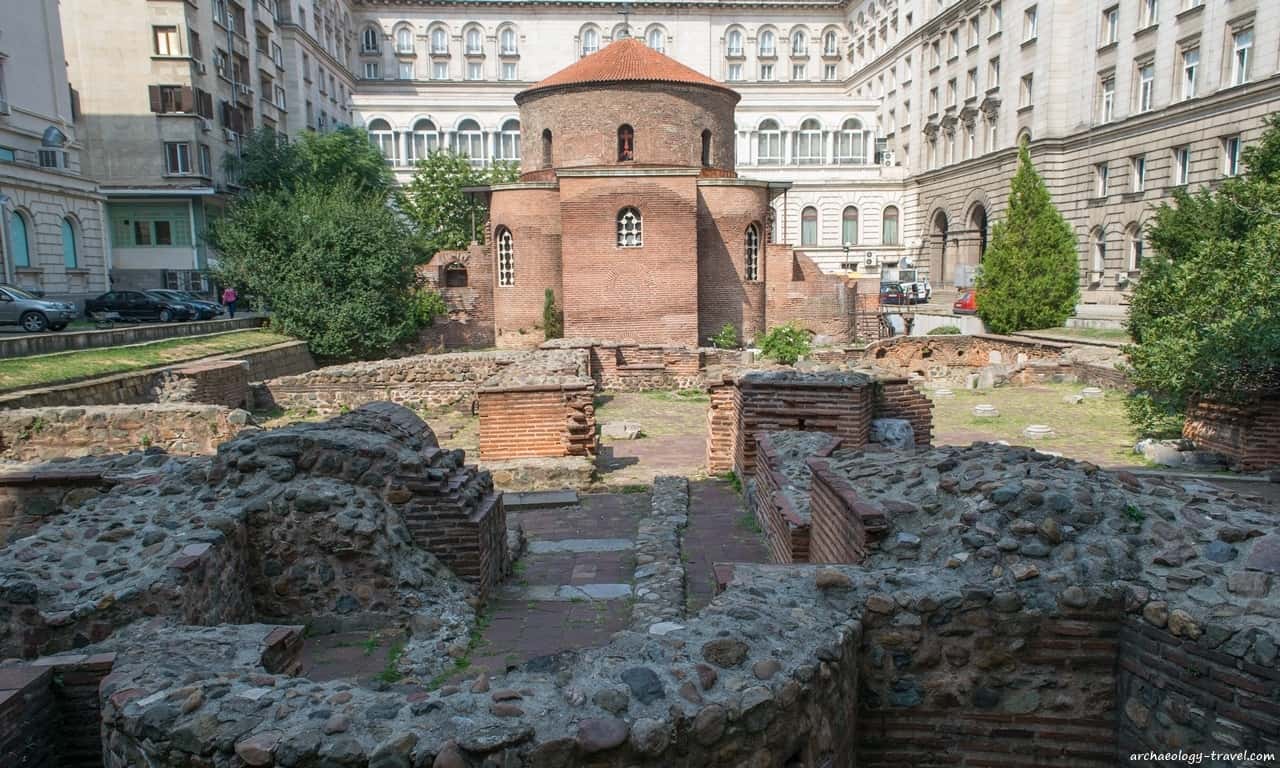 A road runs around the edge of the courtyard, the church and the Roman ruins are in the centre. As you approach the ruins from the alley you will immediately see the apse of an ancient basilica. 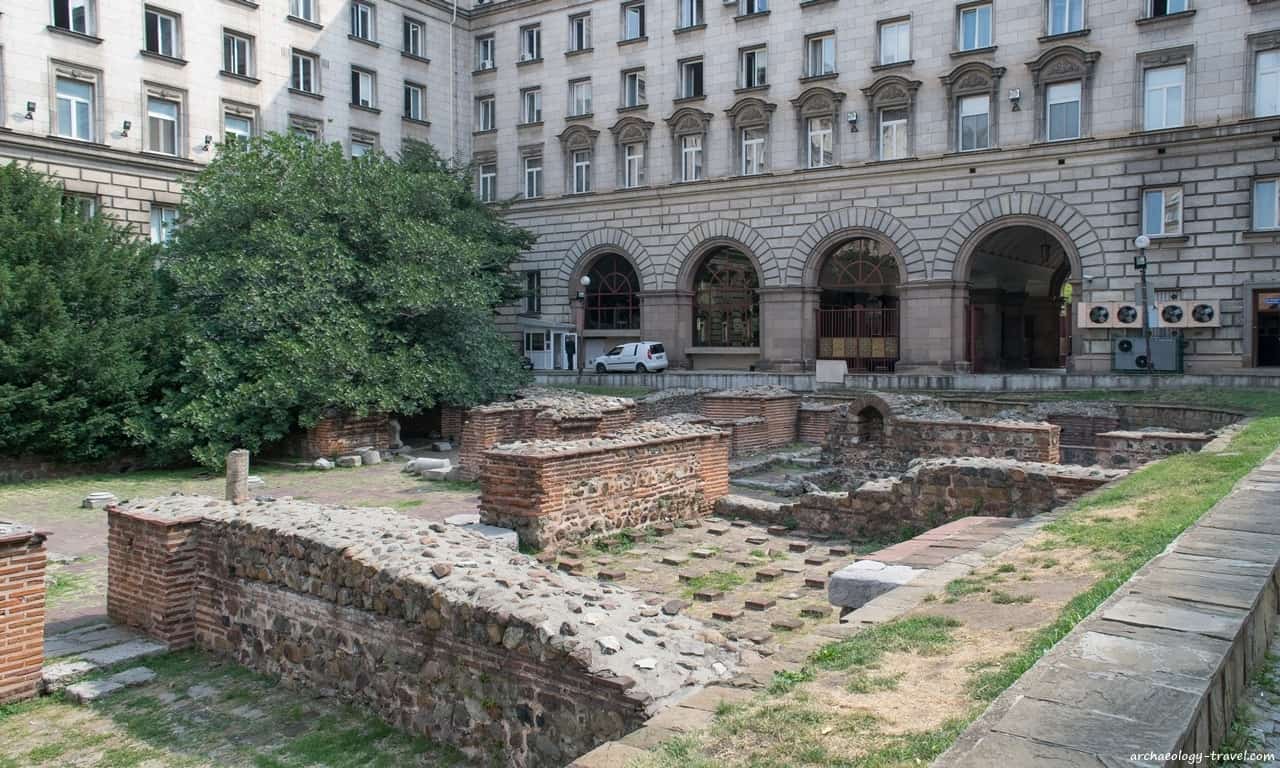 The ruins behind the Church of St George were once part of Serdica, Roman Sofia. Here in the courtyard you can see the remains of a basilica, various public buildings – one of which had a typical hypocaust floor. 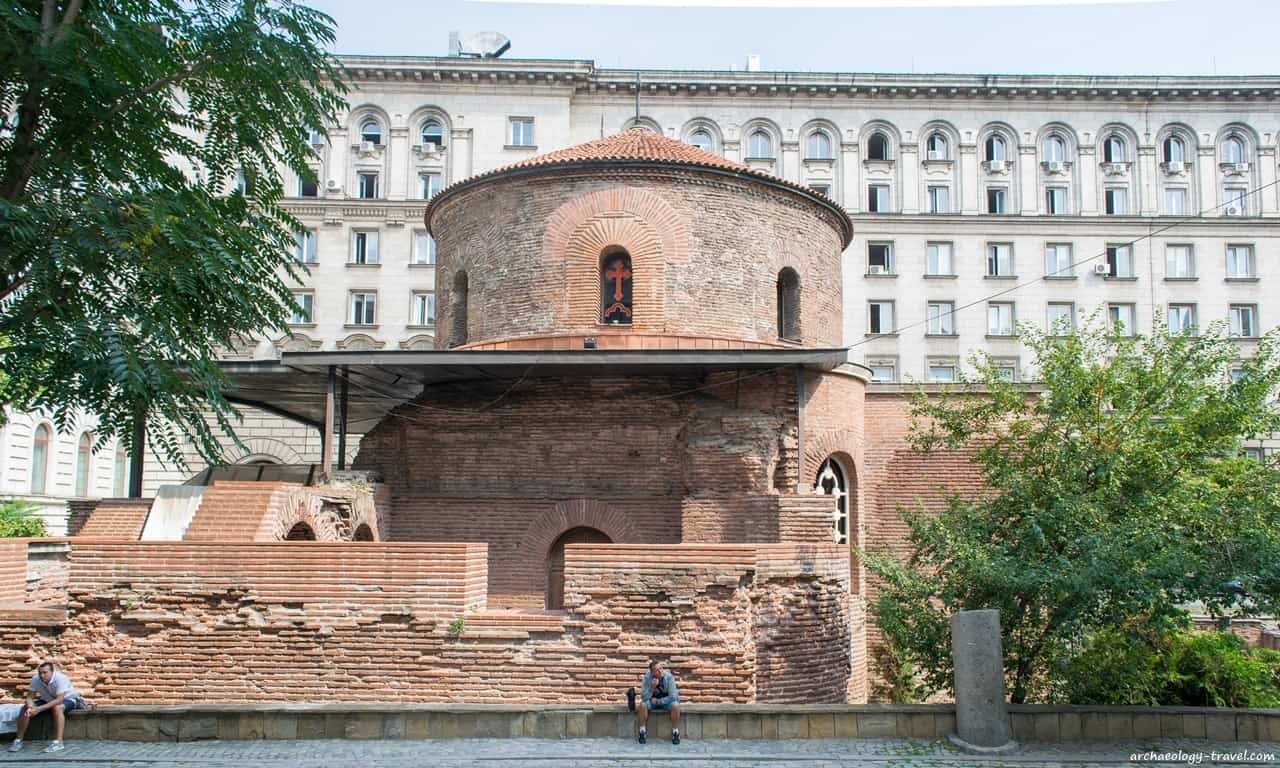 Guided Tours of Churches in and Near Sofia