Paris is not widely thought of as a destination where visitors can explore the stories of World War II. For a start, the city itself was not as visibly marked and dramatically scarred by the war as many other European cities were. More significantly, and for understandable reasons, the French capital tends to be overlooked for the D-Day Beaches. Perhaps most visitors know that Paris was occupied by the German Third Reich from 14 June 1940 to 25 August 1944. Few are aware, however, that beyond a few memorials and museums Paris has a number of poignant landmarks that tell the many, varied stories of a city under siege and an occupied nation’s complicity in the Holocaust.

This guide to the World War 2 and Holocaust sites and museums in Paris does not attempt to recount the different experiences of Parisians during the period of occupation. Many of these accounts are published in a thoughtfully written books, details of my recommendations are listed below. Rather, this guide provides visitors to Paris with the necessary details of all sites, museums and memorials associated with Paris during World War II. Including the occupation of the city, the deportation of thousands of children, women, and men to Germany, attempts to resist occupation, and the liberation of Paris in 1944. Besides basic information required to visit these places of memory, an interactive map allows those who can not visit Paris to get a streetview of these places.

In creating this guide to Paris during World War 2 numerous sources were consulted to produce a mapped memoryscape for those wishing to explore this aspect of the city’s history when visiting Paris. Basic details of the significance of these sites are included here. For those wanting to read in more detail about this period these two books are highly recommended: When Paris Went Dark: The City of Light Under German Occupation (2015) by Ronald Rosbottom is a very readable account, while Anne Sebba’s Les Parisiennes: How the Women of Paris Lived, Loved and Died in the 1940s (2016) provides a poignant image of the city seldom seen.

As an Amazon Associate I earn from qualifying purchases.

Available on Amazon.com and Amazon.co.uk

Available on Amazon.com and Amazon.co.uk

On the morning of 14 June 1940, four days after the French government had fled their capital city, an advance guard of the German army entered Paris from the north east at Porte de La Villette. Ten days later, two days after the signing of the Armistice in Compiègne, Hitler toured the city – his first and only time in Paris. The city of light was officially and symbolically occupied. 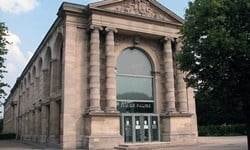 Shortly after Paris was occupied, the Reichsleiter Rosenberg Taskforce set up its headquarters in the Grand Orient de France, the largest Masonic Lodge in France. Initially they only collected books and archives belonging to Jews and Masons who had fled Paris. By October 1940 under Göring’s orders the Taskforce was also charged with collecting Nazi looted art. Art came from around France and Belgium to the Jeu de Paume in the Tuileries Gardens just off the Place de la Concorde. Rose Valland secretly documented this activity; her work features in the recent film Monuments Men. [Website] Photograph © TCY/Wikimedia 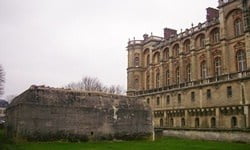 From 14 June 1940 to 25 August 1944 around 20,000 German soldiers and officers were based in Saint-Germain-en-Laye. The city was the headquarters of the German Army Command in the West (Oberbefehlshaber West), which under Field Marshal Gerd von Rundstedt was responsible for Operation Sea Lion – the planned Nazi invasion of Britain. Some 20 bunkers, erected to shelter soldiers in case of air attack, still exist today. One of these is alongside the Renaissance castle that today houses the National Archaeology Museum. Rundstedt’s set himself up in the Pavillon Henri VI, once a royal residence where Louis XIV was born, now a luxury 4* hotel.

Round up and Deportation 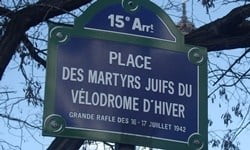 The Vélodrome d’hiver was the first permanent indoor cycle track built in France, 1909. In 1942 the French Police used the stadium to hold Jewish men, women and children rounded up in Paris on 16 and 17 July. Known as the Rafle du Vélodrome d’Hiver, commonly shortened to Rafle du Vel’ d’Hiv, police records list 13,152 individuals were rounded up in the mass raid on Jews in the city. They were held here for days in appalling conditions before being sent on to internment camps. The stadium was destroyed in 1959, and today plaques and memorials marks the site of the Velodrome. Photograph © Mu/Wikimedia 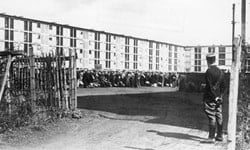 In the early 1930s the Cité de la Muette was hailed as the solution Paris’s housing problem. Innovative construction techniques were supposed to offer low-income families affordable but modern homes. When completed in 1937 the ‘garden city’ failed to impress, so the Ministry of War rented the apartment blocks for the Republican Guard. From July 1940 the Wehrmacht used the complex to house POWs before turning it into an internment camp for Jews, political prisoners, homosexual and other social deviants. From the summer of 1942, people were deported to the east, most for Auschwitz-Birkenau. 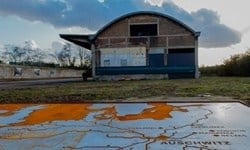 As a result of the arrival of a new German commando at Drancy in June 1943 and the overhauling of the deportation process, Bobigny Station was used for deportations. Bobigny was not only more discreet (unlike Le Bourget, it was no longer being used by the public), it was also practical – long sidings made it easier to load wagons. From July 1943 to August 1944 about 22,500 people deported from France via Bobigny – Jews, political prisoners and homosexuals. Although services of remembrance first took place here in 1946, it is only since 2005 that plans to develop a memorial were formalised, with visits permitted. [Website] Photograph © Henry Perrot 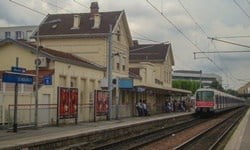 Built in 1863 Le Bourget railway station, north east of the centre of Paris, was destroyed in the Franco-Prussian war of 1870. The station was rebuilt in 1871. It was from this station that 42 convoys carrying around 40,450 people were sent to the death camps in the east, mostly Auschwitz. The first convoy left the station on 27 March 1942 and the final one on 23 June 1943. Le Bourget was considered too public, and so deportations shifted to nearby Bobigny Station. Besides a plaque to commemorate these events, the station we see today is new, having been entirely rebuilt in 2008. 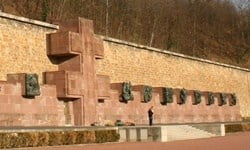 In the western suburbs of Paris, this is the most important memorial to French soldiers who fell in World War II. The monument is below Fort Mont-Valérien where members of the Resistance were held before being executed. Shortly after the war, the bodies of 15 men were interred in a temporary crypt on 11 November 1945. In 1958 de Gaulle commissioned a more substantive monument to commemorate the fighters who fought for France during WWII. The memorial, the main feature of which is a 150 metre wall of pink stone from the Vosges region of France, was opened on 18 June 1960. Photograph © Binche/Wikimedia 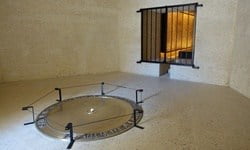 Behind Notre Dame Cathedral, at the very eastern tip of the Île de la Cité is the Mémorial des Martyrs de la Déportation. Inaugurated by President Charles de Gaulle in 1962, this memorial pays tribute to 200,000 plus children, women and men who were Jews, homosexuals, gypsies, political opponents, and so deported from all over France to Nazi concentration camps between 1940 and 1944. A crypt contains the Tomb of the Unknown Deportee: an individual who died in the concentration camp of Neustadt. Each year on the last Sunday in April a memorial ceremony is held here to remember the Deportees from France. Photograph © Guilhem Vellut/Wikimedia 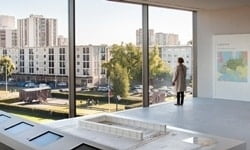 Overlooking what was the Drancy Internment Camp, and a typical waggon used in the deportations, permanent exhibitions in the Mémorial de la Shoah de Drancy offer visitors a poignant experience. The history of the camp, life stories of the people who were interned here between 1941 and 1944, as well as accounts of deportations to eastern Europe that began in 1942 are told with numerous personal documents, letters, diaries, objects and photographs that have been collected since 1945 and in various collection drives for the memorial since 2007. [Website] 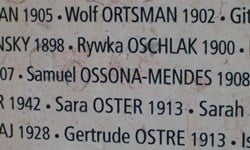 Inaugurated on 27 January 2005, the Shoah Memorial and the Holocaust Center was initiated in the 1940s when Jewish leaders recognised the need for an archive of persecution by Nazi occupiers. Besides the archive there is also a moving memorial to the missing 76,000 or so Jewish men, women and children deported from France between 1942 and 1944 but who never returned. The alley along the north side of the memorial is now named Allée des Justes (Alley of the Righteous). Bronze plaques on the wall list the names of over 3,300 people – the Wall of the Righteous; people who helped Jewish communities during the Occupation.

On the banks of the Marne River in Champigny-sur-Marne is the Musée de la Résistance Nationale. Well over 2,000 objects, photographs and documents make up the largest collection of artefacts relating to the French Resistance during the Second World War. Displays of these items tell the story of the origins of the resistance movement, as well as the contribution its members played in the liberation and development of post-war France. A programme of temporary exhibitions complements the permanently exhibited story of the French Resistance. Although beyond Paris, the museum is easily accessible by public transport. [Website] 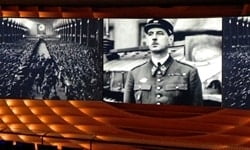 The nation’s military museum is housed in the Hôtel national des Invalides> And with collections of weapons from at least the 13th century this is one of the biggest museums of military art and history in the world. Three galleries tell the military story of the Second World War, from the ‘black years’ and the defeat of France to the ‘light years’ and the liberation of France. Also relevant to this period is the interactive multimedia gallery dedicated to the life and work of one of France’s greatest heroes, Charles de Gaulle; who in 1945 presided as leader over the Provisional Government of Free France. [Website] 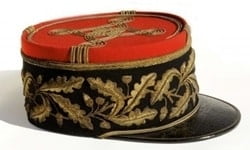 The Ordre de la Libération was created by General Charles de Gaulle in 1940. In 1967 de Gaulle moved the organisation Order of the Liberation into Les Invalides. The museum contains three galleries and six rooms (total 1,000 m²) documenting the history of the Free French Forces, de Gaulle’s manuscripts, resistance activities, and the concentration camps. Showcases contain more than 4,000 objects including uniforms, weapons, clandestine press and leaflets, transmitters, flags taken to the enemy on the battlefields of Africa and Europe, the first naval flags of Free France, and relics from the camps. The hall of honor is dedicated to General de Gaulle. [Website]