The eastern limit of north east Bulgaria is the Black Sea. Along the coastline is the city of Varna — Bulgaria’s maritime capital and third largest city. Like south east Bulgaria, this northern stretch of the coastline has many beach resorts and is well known for its nightlife, making this a popular tourist destination in summer. Varna is one of a number of ancient seaside towns along the Black Sea Coast, known in antiquity as Odessos. The city and nearby beaches are a popular tourist destination. There are many archaeology and historical sites near Varna. Not to be missed in Varna itself is the Regional Historical Museum, known for its extraordinary collection of Thracian gold artefacts – or the Roman public Baths, said to be amongst the biggest in the Roman world. Inland are a number of Roman and Medieval museums and sites, as well as the reconstructed Neolithic Village in the town of Neofit Rilski. See also: Introduction to the Archaeology & History of Bulgaria Abritus was at first a Roman military camp built on the ruins of an ancient Thracian settlement in the 1st century AD. A town soon developed and grew into one of the largest urban centres in the Roman province of Moesia Inferior. In the 6th century the town was attacked and destroyed by a Eurasian nomadic group called the Avars. The archaeological site has been extensively excavated and restored, with an onsite museum displaying the artefacts recovered. Photo © Vladimir Petkov 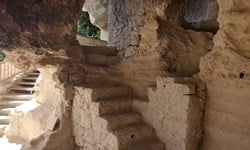 Not far from the well-known Golden Sands beach resort, in natural limestone cliffs are the caves that made up the early Medieval, Christian Orthodoox Aladzha Monastery. Today fragments of frescoes and mosaics show the monastery was once beautifully decorated. The cave monastery is a very popular tourist attraction, and during summer sound and light shows are held in the evenings.
Photograph © Камен Ханджиев/Wikipedia 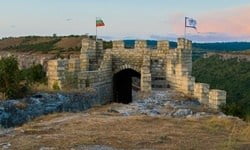 On the plateau immediately above the the town of Provadia is the reconstructed stone fortress of Ovech. Although it is the Medieval fortress that you can see from the streets of Provadia, the site was first inhabited by the Thracians, followed by the Romans, Byzantines, Bulgarians, and the Turks – each leaving their mark. Next to the rock-cut 12th century foundations of the church are a number of graves, also cut into the bedrock. 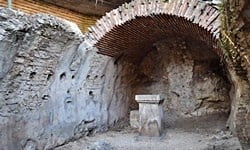 Located in the southeast of modern day Varna are the remains of the Roman public bath house. Built during the 2nd century AD when Varna was known as Odessus, these substantial ruins are amongst the best preserved Roman buildings in Bulgaria today. Covering a ground area of 7000 m2 with vaults at 22 metres high, the bath house in Odessus is the largest on the Balkan peninsular, and the fourth largest in Europe. [Website] The Historical Museum in the town of Isperih covers the history of the area from antiquity to the present day. On display to tell this history are over 30,000 artefacts, including archaeological and ethnographic objects, written documents, photographs as well as the personal belongings of famous people from the town and the municipality. The museum was found in 1927 by the local archaeological society, and by 1984 it was recognised as an independent local historical museum. [Website] 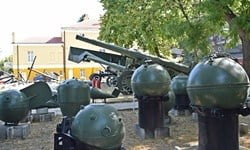 The Naval Museum in Varna is a branch of the National Museum of Military History in Sofia. With indoor and outdoor exhibitions deal with all aspects of the Bulgarian Navy’s history. One of the highlights of the museum is a torpedo-boat, the ‘Druzki’. Built in France in the early 1900s, the vessel was used in the Balkan War, and both the First and Second World Wars. As well as boats and armaments, the museum has a diverse collection naval memorabilia on display. [Website] 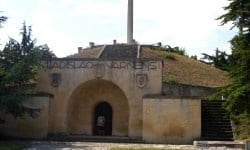 The site of the 1444 Battle of Varna, led by the Polish-Hungarian King Vladislav Varnenchik against the Turks, is now a memorial park. Within the Park are two Thracian tombs, that date to the 4th century BC. One of these is said to have been as a command post of Sultan Murad II, and in 1935 it was converted into a symbolic mausoleum for King Vladislav. An onsite museum displays uses period artefacts, including weapons from the battlefield, documents the battle. [Website]