South central Bulgaria is dominated by mountain ranges to the west (Rhodopes and Sredna Gora) and the Upper Thracian Plain to the north and east. The Central Balkan National Park is hope to the spectacular Raysko Praskalo Waterfall – the highest in the Balkans. The region is particularly well known for the many well preserved Thracian archaeological sites, many of which are UNESCO listed World Heritage Sites. But the evidence for continuous human occupation in some of the major cities, Plovdiv and Stara Zagora for example, extends further back to the Neolithic. These two cities were both important Roman towns, known then as Philipopolis and Augusta Traiana, and extensive Roman remains survive and are popular attractions today. Greece and Turkey are southern international neighbours. See also: Introduction to the Archaeology & History of Bulgaria Constructed in 1981 by the Bulgarian communist regime to commemorate the founding of the Bulgarian Social Democratic Party, the Buzludzha Monument is no longer maintained. As the roof of the dome has been heavily damaged and is unsafe it is now closed to visitors. The peak itself has a significant history. On 18 July 1868 Hadzhi Dimitar, a prominent revolutionary for the liberation of Bulgaria from the Ottoman Empire, was defeated here by the Ottomans. Photo © Mark Ahsmann 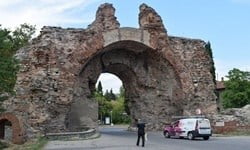 The natural springs in Hisarya have been attracting people for thousands of years. Although evidence of prehistoric and Thracian occupation has been found around the town, Hisarya is best known for its impressive Roman remains. These include the military barracks, public baths, a small amphitheatre and fortifications. Hisarya was one of the three most important towns in the Roman province of Thrace, then called Diocletianopolis or Augusta. Lucian of Samosata described Plovdiv as “the largest and most beautiful of all cities.” Although not the capital of the Roman Province of Thrace, it was the most important and largest city in the region. Hence the large-scale construction of buildings by the Romans. Some of these survive today making this a great city to visit for archaeology. These include a forum, a stadium, two basilicas and a theatre that has spectacular views over the city onto mountains to the south. Photo © Dennis Jarvis 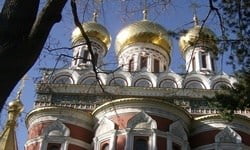 Given the church’s position on the side of a mountain above the town of Shipka, the bright, gold domes can be seen from afar. Although built at the turn of the 19th century, it has the design of a 17th century Muscovite church. The monastery is dedicated to the Russian, Ukrainian and Bulgarian soldiers who fell fighting for the liberation of Bulgaria during the Russo-Turkish War of 1877-78. The 53 metre high bell tower has bells that were cast from cartridges collected from the battlefields. 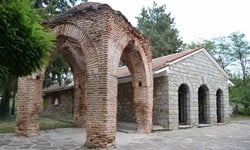 Dating to the end of the 4th century BC and discovered in 1944, this Thracian tomb on the outskirts of the town of Kazanlak is considered the finest example of Thracian creative expression in Bulgaria. Consequently, visitors today visit a replica, not the original tomb. An inner, circular burial chamber is accessed by a narrow corridor, both of which have exquisite frescoes depicting Thracian rituals. The site was added to the UNESCO list of World Heritage sites in 1979. 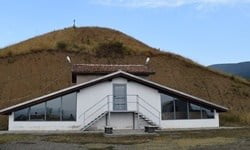 Under a mound of about 18 metres high a six-roomed structure that covers about 100 square metres. One of the chambers is fully preserved, and cut from two pieces of granite – weighting about 60 tons. One of these is the roof block, the inner ceiling of which has exquisite portrait-style paintings. The tomb was plundered in the past, but excavations in 1993 recovered the remains of a beautifully decorated horse sacrifice. 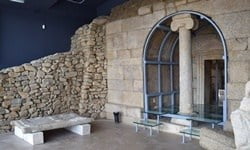 The Thracian tomb within this mound was excavated relatively recently, 1996. A large corridor leads to an antechamber, which in turn leads into a circular burial chamber with a domed ceiling. A variety of styles was used for the columns, an Ionic column in the antechamber and Doric columns in the chamber. Unfortunately the tomb has been robbed, but remains of a funerary bed were recovered. As with other tombs in the Valley of the Thracian Kings, this one is also dated to the 4th century BC. 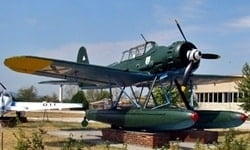 Situated next to the Plovdiv Airport, the Aviation Museum charts the history of military, sport and agricultural aviation in Bulgaria. Over 30 airplanes and helicopters can be seen in the grounds, including a German Arado-196 A3 Shark hydroplane – the oldest in the collection. Indoor exhibitions display a diverse range artefacts and documents, such as the changing uniforms of the Bulgarian Air Force. The museum is a branch of Bulgaria’s National Museum of Military History. [Website] 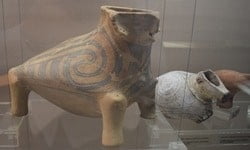 During the construction of the hospital in 1969 the remains of some of the earliest inhabitants of Stara Zagora were found. The Neolithic houses are dated to the 6th millennium BC, hence why Stara Zagora is said to be one of the oldest cities in Europe. The museum was built over the remains of two dwellings, to preserve these in situ. Beautifully displayed in glass cases are the some of the spectacular artefacts found by archaeologists. [Website] Located in the centre of town, this regional history museum showcases only a fraction of the finest artefacts that illustrate the historical development of Stara Zagora from the early Neolithic to the Resurrection of the city in 1879 having been burned during the Russian -Turkish war. During the construction of the existing building (opened in 2009), the remains of a Roman road were found, complete with columns, statues and stone reliefs; restored and presented in situ. [Website | Facebook]