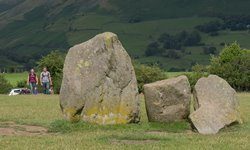 Situated on the crest of Chestnut Hill, itself on the plateau of Castlerigg Fell, from here there is a stunning panoramic view of the surrounding mountains, quite breathtaking in any weather. The stone circle is thought to be about 5,000 years – old making this one of the earliest in Britain. Not only is Castlerigg Stone Circle an interesting and historically significant Neolithic site to visit, its location on a hill with wonderful panoramic views makes this a must see site for anyone visiting the Lake District.

On the northern edge of picturesque Lake Windermere is the four acre Ambleside Roman Fort. Built in the 2nd century AD, its location suggests the fort was placed to receive supplies by ship. The strategic positioning and granaries larger than required for a fort of this size suggests the fort supplied Roman troops that policed the Lake District. The site was excavated in the early 1900s, when the granaries were found, artefacts from these excavations can be seen in the National Park Centre, Brockhole.

Built sometime between 120 and 138 AD to guard what is today called the Hardknott Pass, today this must be one of the most remote and dramatically located Roman forts in Britain. The fort commands great views of the valley, through which the road passed from the fort in Ambleside to that of Ravenglass.

The striking walls of what was once the bath house of Roman fort, that also served as a harbour, are amongst the tallest surviving structures in northern Britain. Earthworks of the fort’s defences are also visible. Constructed in 130 AD, the harbour fort was occupied continuously until the end of the 4th century. The standing remnants were from the west end of a building that measured about 12 metres by 27 metres long. Excavations in 1881 revealed the remains of the hypocaust underfloor heating system. 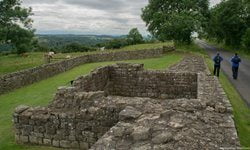 A number of the original architectural and defensive features of Hadrian’s Wall, built to defend the northernmost frontier of the Roman Empire, still survive today. The wall was planned to have a milecastle every Roman mile, and then two turrets, square watchtowers, equally spaced between each milecastle. The Banks East Turret, one of many sites along the route of the wall, is well preserved with adjoining stretches of the wall. 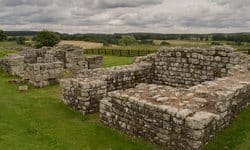 Birdoswald Roman Fort, called Banna by the Romans, is one of the best preserved forts along Hadrian’s Wall. The relatively well excavated fort has the usual set of buildings, a central headquarters building, granaries and barracks, but the remains of an exercise building have also been uncovered. It is also here that the longest continuous surviving stretch of the wall itself can be visited. An onsite farmhouse-style B&B is available for anyone visiting Hadrian’s Wall wishing to overnight on this historic site.

Harrow’s Scar Milecastle is just to the east of Birdoswald Roman Fort where the wall would have crossed the River Irthing. Also known locally as Willowford Bridge, the east abutment has survived, although because of the westward movement of the river it is now some distance from the river. The west abutment has been entirely eroded away, leaving only the remains of the small fort. It was excavated in 1898 and again in 1953. 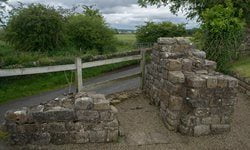 Pike Hill Signal Tower was a signal station built before Hadrian’s Wall. This was one of a number of signal towers constructed along the stone road of Stanegate, which ran between two military forts in what are now Corbridge and Carlisle. Pike Hill was later incorporated into Hadrian’s Wall. Pike Hill Signal Tower was excavated in 1931. Pottery fragments date to Hadrian’s reign as Emperor and also as late as the 4th century, suggesting this particular defence feature was in use until at least the 4th century AD. 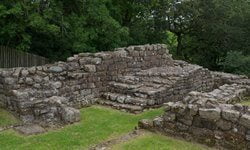 Of all the milecastles along Hadrian’s Wall, Poltross Burn Milecastle (milecastle 48) is said to be one of the most well preserved examples of this type of small fort. An oven and the remains of its north gateway amongst the surviving features. But it is the remains of a flight of stairs to the rampart walk that distinguishes this fort from others along the wall – these suggest a height of 4.6 m for the curtain wall. 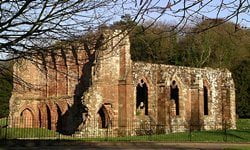 Furness Abbey was founded by Founded in 1123 by Stephen, Count of Boulogne – who would later become King of England. The Abbey was once the second wealthiest Cistercian monastery in the country, and thought to have been the most powerful. Built entirely from local sandstone, today much of the east end and west tower of the church, the ornately decorated chapter house, and the cloister buildings survive. As the Abbey is in danger of sinking into the soft sand considerable efforts to preserve the building are underway.

Kendal Castle started as an earthen ringwork and bailey fortress at the end of the 12th century. It was not until the following century that the stone castle was built by William de Lancaster. Later, in 1383, the castle passed into the possession of the Parr family, but was abandoned in 1571 and became the possession of the crown. Today the castle Hill is set in a wooded parkland, that is a wonderful place to walk and have a picnic. From the castle hill there are splendid views in all directions of the lake district.

A local museum owned by Kendal Town Council, managed by Kendal College that has its roots in a private collection dating to the end of the 18th century. Displays and collections range from local archaeology and history of Kendal and Cumbria, as well as natural and geological history. Local archaeology of Cumbria is on display in the Wainwright Gallery, which begins with Mesolithic and Neolithic stone tools and implements to the Roman and Medieval history of the town of Kendal and its immediate surroundings. [Website]

An award winning museum built next to the Roman fort of Roman settlement known as Alauna Carvetiorum, housing one of the finest collections of Roman military altar stones in Britain. The museum houses the Senhouse Collection, an assemblage of Roman artefacts started in the 16th century by John Senhouse, and in the 18th century by Colonel Humphrey Senhouse. Making this one of the oldest collections of Roman antiquities in Britain. The objects are from the adjacent fort and the civic settlement. [Website]