Things to do in Dorset

15+ D-Day Sites to Visit in England

When we think of D-Day, we all have mental images of troops landing on the beaches of Normandy. What about where they left from? D-Day was months in the planning and preparations, all of which took place in the UK. In honour of the 75th anniversary of D-Day, we have compiled a list of the sites in the UK, that includes Dorset, where you can learn about the other side of the D-Day landings …Continue Reading >> 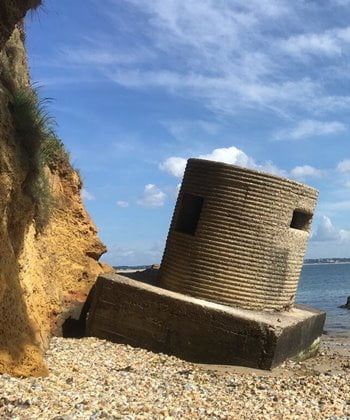 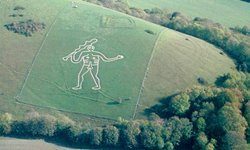 The Cerne Abbas Giant is not only Britain’s largest hill figure, it is also the most controversial. Carved on the side of a steep hill, this representation of a male is 55 meters high and 51 meters wide. He wields a club and also has an exaggerated erection – a feature that has given fuel to much speculation and fantasy about the fertility powers of the image and the location. The age of the chalk figure is uncertain, ranging from the Iron Age or Roman to the Anglo-Saxons or sometime in the 17th century. Photograph © PeteHarlow. 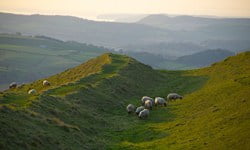 Eggardon Hill began with two Bronze Age barrows, with the fort being constructed about 2,500 years ago. Located on chalk uplands near to Bridport, spectacular views across Lyme Bay can be experienced from the Hill’s summit. There are two original entrances from the south-east and north-west perimeters. During the 18th century, the fortification was used as a smuggling spot – a small cluster of trees was used as a guiding point for incoming ships. Beautiful walks here can be enjoyed by all. Photograph © Chris Belsten. 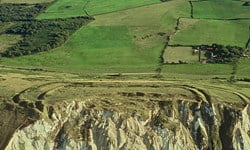 With its south side dramatically eroding into the sea, Flowers Barrow near Wareham is an atmospheric Early Iron Age hillfort. It has impressive parallel ramparts and traces of hut circles within. Archaeological excavations in 1939 produced a number of finds including Iron Age pottery sherds, human remains, and stone projectiles. The site can be accessed via a beautiful coastal path and there are breath-taking views of Worbarrow Bay to be enjoyed form the inner ramparts of the fort. Photograph © Francesca Radcliffe. 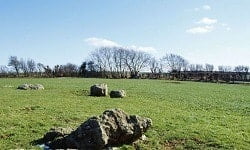 This prehistoric stone circle is thought to date back about 4000 years ago to the Late Neolithic or Early Bronze Age. The site lies between the villages of Abbotsbury and Littlebredy, on a hilltop that overlooks the sea. Made up of 18 fallen stones in an irregular oval shape – its diameter measures 27 metres at its greatest, and 18 meters at its most narrow. Some of the stones are broken adding to the mystery of this ancient circle, which now connects five footpaths, making it a place of significance. Photograph © English Heritage. 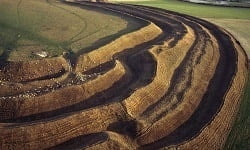 Known for its striking and imposing, multiple concentric ramparts, Maiden Castle is one of the largest and most complex Iron Age hill forts in Europe. Located in Dorchester, several hundred people lived here in the 800 years before the arrival of the Romans in Britain. However, this hilltop archaeological site has a history that spans at least 4,000 years, starting with a causewayed enclosure in the Neolithic to a temple built by the Romans during the 4th century AD. Photograph © English Heritage.

The Nine Stones in the rural village of Winterbourne Abbas, stand beneath a canopy of trees next to the A35. This prehistoric stone circle is made up of seven stones measuring under a metre, and two much larger, which are believed to mark the entrance. This elliptical circle is around 4000 years old and the stones are all irregular in shape. The site is a small example, measuring just 8 metres in diameter. Unusually, it lies at the bottom of a valley. Photograph © English Heritage. 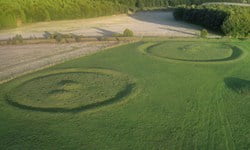 The site at Oakley Down is one of the most visually stunning round barrow cemeteries in the south of England. Spanning a history of over a thousand years, there are 31 single barrows here at least. They vary in type and include bowl barrows with circular ditches, bell and disc barrows, and one saucer barrow. The cemetery is located in Cranbourne Chase with a Roman road running along its east-side. The north field contains the excavated remains of ‘Wore Barrow’ which dates to the Neolithic. Photograph © Hamish Fenton. [Website] 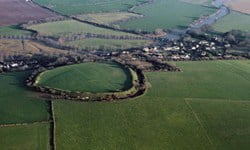 Dating back to the Iron Age, the Iron Age hillfort overlooks the River Stour and has commanding views across to Badbury Rings. Due to its lack of defences, it is thought that the fortification was never completed. It has one entrance to the north-west, with just a single rampart and ditch. The construction of a railway here in 1857 uncovered a mass grave of 120 skeletons. A range of in-situ military artefacts suggests the human remains were the result of a fierce battle with the Roman army. Photograph © Francesca Radcliffe. 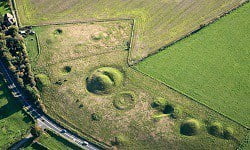 Staggered alongside the A35 from Wimbourne is a clustering of Bronze Age burial mounds. There are 44 barrows in total that make up this prehistoric cemetery, which is believed to date from around 1500 BC. They vary in type and include disc, pond and bowl barrows. Some are grouped together – suggesting family burials, while others are more sparsely placed. The largest barrow at the site is a central bowl barrow which measures 2.5 metres in height, and has a diameter of 35 metres. Photograph © English Heritage. 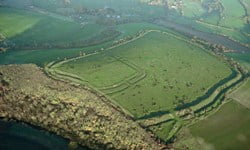 This stunning multi-period hillfort is the largest in Dorset. The main rampart was constructed in the Late Iron Age about 500 BC. In the north-west corner of the fort is a clearly defined Roman camp which was occupied from around 43-50 AD. The archaeology here has revealed that human activity continued up until the Middle Ages, with the fort containing Iron Age, Roman and Medieval entrances. Now owned by the National Trust, Hod Hill is a popular attraction with walking trails and nature to be discovered. Photograph © Francesca Radcliffe. [Website] 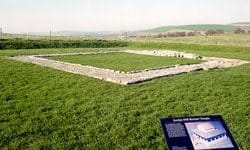 A hilltop temple thought to have been built during the 4th century AD. It is typical of the type found in Roman Britain: small and symmetrical with a central sanctuary that was surrounded by a columned portico on all four sides. The remains found in nearby pits suggest it was used for pagan rituals. The temple is on the summit of Jordan Hill above Bowleaze Cove, right on the edge of Overcombe, in the eastern suburbs of Weymouth. The site has superb views inland and out over Weymouth Bay. Photograph © English Heritage. 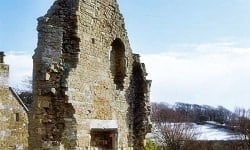 The Abbey at Abbotsbury was founded in 1044 AD. It would have once been a series of buildings grouped together close by to the church. A Benedictine community would have lived here, though the little surviving remains are 13th and 14th century in date. In 1539 AD the Abbey was dissolved, and was probably then used as lodgings. The ruined stone gable with two fireplaces on the interior side is all that stands now. Nearby are the remains of the tithe barn and fragments of the old church. Photograph © English Heritage. [Website]

Corfe Castle lies in the scenic village of Corfe. It’s 1000 years of turbulent history has seen kings, murders, and the English Civil War pass by. Now a site encompassing striking ruins and breath-taking views, the castle began as a Saxon stronghold before succumbing to the Norman invasion. It has since been a royal palace and family home. There is plenty to explore here including fallen stone walls, secret areas and the gruesome ‘murder holes’. Perfect for kids, families, and enthusiasts alike. Photograph © National Trust [Website] 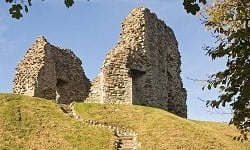 Christchurch Castle survives as a ruined 12th century motte-and-bailey castle and chamber block – the latter now referred to as the Norman House. Set between two rivers, the site in Christchurch has seen various phases of building until its eventual dismantling in 1651 AD, following the Civil War. The chamber block was constructed around 1160 AD as opulent living accommodation for the 2nd Earl of Devon and his family. Today it is a rare example of a domestic Norman structure with its tall circular chimney. Photograph © English Heritage. [Website]. 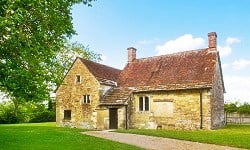 Fiddleford Manor is a charming example of small medieval stone manor house. The structure was first started around 1370 AD, although many alterations have been made over the centuries. It is believed to have been built for the Sheriff of Somerset and Dorset. The house has some beautiful interior features including the original roof solar which is ornately oak-carved. There is also the remains of a religious wall-painting of the Angel Gabriel. The gallery to the west and north wing are both 16th century additions. Photograph © English Heritage. [Website] 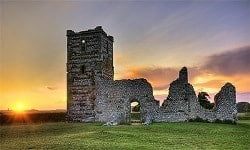 Lying on the outskirts of Wimborne in Dorset, this medieval church ruin has tales of being haunted. Built in the 12th century, it also stands within the centre of a Neolithic earthwork and ritual henge. The significance of this being that it shows how the site changed from a place of pagan to Christian worship – over a time span of some 4000 years. The church is built of flint and stone and combines Norman-style arches with a later 15th century tower. The roof-line is clearly visible. Photograph © James Battersby. [Website] 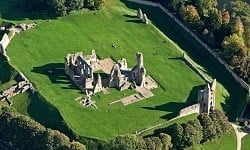 Built in the 12th century, these atmospheric ruins can be found in the grounds next to the later 16th century castle at Sherborne. The remaining stone structures consist of the ‘North Range’ and ‘Great Tower’. Its ruined state is not surprising considering the two sieges that took place here during the Civil War. The most famous owner was Sir Walter Raleigh who was deeply fond of the castle and its grounds. A brilliant place to visit and explore, extensive views of the surrounding countryside can also be enjoyed. Photograph © English Heritage. [Website] 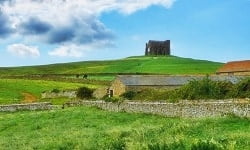 Set high upon a hilltop, St Catherine’s Chapel overlooks the remains of Abbotsbury Abbey. Built in the 14th century, it was place of monastic retreat and pilgrimage. The barrel-vaulted chapel exhibits examples of medieval architecture including arched gothic windows and buttressed walls. Stunning views across towards Chesil Beach and Portland Bill can be enjoyed here. The sturdy rectangular building is made entirely from local limestone, designed to be strong enough to support the heavy stone roof. Photograph © Susie Peek. [Website] 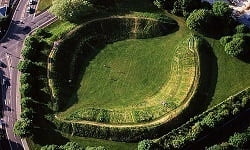 Maumbury Rings is an archaeological site that began as a Neolithic henge. The henge ditch was then modified by the Romans to create an amphitheatre. The oval flat area was the arena and the grass covered banks the foundations of the seating, estimated to be about 13,000. During the Civil War of the 17th century the site was used as a defensive fort. The site is a short walk to the Dorset County Museum, where numerous artefacts recovered from extensive excavations can be seen. Photograph © English Heritage. 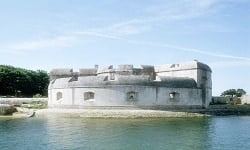 This striking coastal fort overlooking Portland Harbour was built by Henry VIII sometime around 1540 AD. It was constructed to help defend against possible invasion from the French and Spanish armies. The castle lies in a position of great strategic importance and was reused in both World Wars for this reason. There are gun platforms and cannons to discover, as well as a Tudor kitchen. An audio tour is also available, taking visitors on a journey through Portland Castle’s fascinating 450-year history. Photograph © English Heritage. [Website] 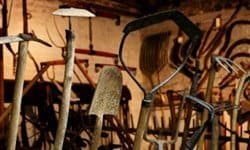 The Dorset County Museum is an independent museum that is owned by the Dorset Natural History and Archaeological Society. There are over 1.3 million objects in the archaeological collection covering the full sweep of Dorset’s past from prehistory to the Medieval period, making this one of the most important collections in the study of archaeology in Northern Europe. Displays include artefacts from one of the most important sites in England, the Iron Age hill fort of Maiden Castle. [Website]