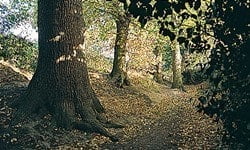 The Lexden Earthworks are a series of earthen fortifications erected in the Iron Age by the Catuvellauni to defend Camulodunon – the modern town of Colchester. Various burials were made near to the earthworks throughout later prehistory and into the following Romano-British period. The best known is the wealthy Iron Age burial within the (Bronze Age) Lexden Tumulus; excavated in the 1920s, the finds are now in Colchester Castle Museum. The site, a popular local walk, is managed by English Heritage. © English Heritage [Website] 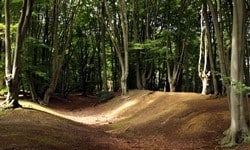 In Epping Forest in Essex’s borderlands with Greater London, Ambresbury Banks is one of two hillforts. A single earthen enclosure surrounds the site, an area of 11 acres. Folklore associates Ambresbury Banks with the battle that took place between the Roman army and Boudicca, the rebellious Queen of the Iceni, although there is no archaeological or historical evidence to substantiate this claim. At least nine excavations have taken place at the site since the 19th century. Great for keen walkers. © Chmee2/Wikimedia

Now sitting rather incongruously in a field within an industrial estate, the Harlow Temple was a religious site in the Romano-British period. Prior to the erection of the temple, the space had housed a Bronze Age pound barrow and then an Iron Age ritual centre. Evidently, this was a sacred space for several millennia. Paving slabs indicate the position in which the temple once stood, while information boards assist the visitor in visualising the site as it would have been. Finds discovered during the 20th century excavations are on display at Harlow Museum. 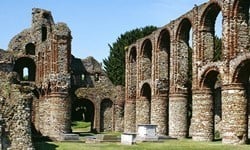 The first Augustinian convent in England, St. Botolph’s Priory started as an Anglo-Saxon church dedicated to the eponymous saint. The Augustinians took over at the start of the 12th century, with much early Norman architecture surviving from this period. In 1536, the priory succumbed to the dissolution of the monasteries, and King Henry VIII gifted it to the Lord Chancellor, Sir Thomas Audley. Part of the complex remained in use as a parish church until it was damaged during the English Civil War. © English Heritage [Website] 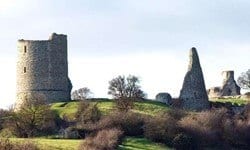 Standing on a promontory overlooking the Thames Estuary, this once majestic fortification dates from the 13th century. Its creator was Hubert de Burgh, the 1st Earl of Kent and a trusted ally of King John. Recognising its vital defensive position, King Edward III substantially enhanced the castle during the Hundred Years’ War with France, later residing there during his elder years. Partly demolished in the 16th century for re-use as building material, the fortification now stands in ruins. © English Heritage [Website] 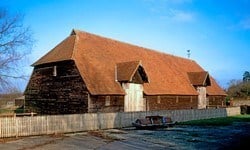 Likely built in the 15th century, Prior’s Hill Barn is an impressive surviving Medieval timber barn. The village of Widdington was owned by Oxford University’s New College since the 14th century and it is probable that the college ordered the barn’s construction. The barn would originally have consisted of 900 separate timbers, and would have been used for storing barley, wheat, oats, and rye grown in the local area. Several 18th century additions include a raised floor and brickwork that replaced the original flintwork. © English Heritage [Website]

Hill Hall is an Elizabethan manor house built in the 1560-70s for the diplomat Sir Thomas Smith. It replaced an earlier Medieval building on the same site and the landscape designer Humphry Repton created the gardens. The Smiths remained in the house until the 19th century. During the 20th century, the house served as a Second World War POW camp and later a women’s prison. Despite this troubled history, several rare original wall paintings survive. Owned by English Heritage, Hill Hall is used for private residences. © English Heritage [Website]

In 1776, the architect Robert Adam designed the neo-Classical Church of St. Mary the Virgin for the wealthy local landowner, Richard Rigby. Rigby was in the process of transforming Mistley into a spa town and wanted a suitably grandiose place of worship. In 1870 the building was demolished to make way for a neo-Gothic church nearby but the two Mistley Towers survived as a testament to Adams’ original vision. The Grade I-listed towers consist of rendered brickwork with Portland stone decoration. The churchyard contains additional 18th century monument, including Egyptian revival features. © English Heritage [Website]

This artillery fort on the northern banks of the River Thames has long played an important role in the defence of London. Henry VIII established it as one of his Device Forts to counteract the French before its use was revived when England was threatened by the Spanish Armada in 1588. The fort was a Parliamentarian stronghold in the English Civil War while it underwent expansion to counteract the Dutch threat in the 1670s. By the late 19th century it was considered obsolete and decommissioned 1950. © English Heritage [Website] 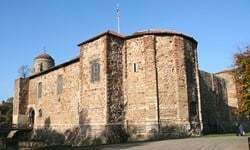 Built on the foundations of a Roman temple – parts of which can be seen today, Colchester Castle is a typical Norman castle and keep built shortly after the Norman conquest. Exhibitions include both natural and human history, the archaeology covering the history of Britain over the last two millennia, beginning in the late Iron Age. From the later Iron Age on into the early Roman period the area we know of today as Colchester was the most dominant area in southern Britain. [Website]