Archaeology & History Sites on the Isle of Wight

Roman Sites on the Isle of Wight 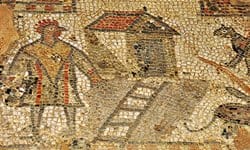 With a new state-of-the-art and award winning exhibition and visitor centre the Brading Roman Villa is one of the finest Romano-British archaeological sites in the UK. The Roman villa started out as a simple farmstead, but by the time it was destroyed by fire towards the end of the 3rd century it was an impressive villa with some excellent mosaic floors. The main building of the villa is now entirely exposed and under cover. [Website]

Medieval Sites on the Isle of Wight 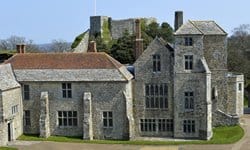 Today a popular attraction on the Isle of Wight managed by English Heritage, Carisbrooke Castle has had many lives over its 1,000 year history. The earliest evidence is that of a Saxon fortress against Viking raids, then a Norman castle, an Elizabethan artillery fortress, a king’s prison during the Civil War and also a royal summer residence in the early 20th century. Since 1944 the hall range, originally renovated for Queen Victoria’s daughter Princess Beatrice, has housed the Isle of Wight Museum.
Buy Entry Tickets for Carisbrooke Castle Online >>

Early Modern Sites on the Isle of Wight 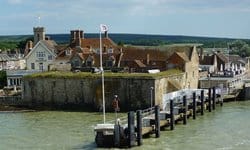 An artillery fort constructed during the reign of King Henry VIII in 1547, with modifications and renovations in the 16th and 17th centuries, Yarmouth Castle continued to be used until 1885. This was the first arrowhead artillery bastion to have been built in England. It was brought back into military use during the two World Wars. Today a tourist attraction, the fortification still has a prominent position in Yarmouth Harbour. Photograph © Franzphoto/Wikipedia. [Website]

Modern Sites on the Isle of Wight 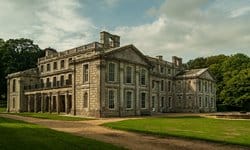 When built in the early 18th century, Appuldurcombe House was a masterpiece of English Baroque architecture. So grand, the gardens were landscaped by the grandest of English gardeners, Capability Brown, in the 1870s. Although much of this park is now incorporated into surrounding farmlands. Once the finest house on the Isle of Wight, today the building is a shell. In the early years of the 20th century monks from France were housed here before the construction of Quarr Abbey. Photograph © Cpsterling/Wikipedia [Website] 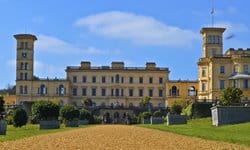 Osborne House stands on the site of an 18th century house, of which only the garden and stables remain. With the view over the Solent, Prince Albert was reminded of the Bay of Naples. And so the private holiday home for built for Victoria and Albert’s family was styled to look like an Italian Palazzo. Osborne House was one of three residences to which the Queen withdrew following the death of her husband. And it was here that Victoria died in 1901 at the age of 81.
Buy Entry Tickets for Osborne House Online >>

20th Century Sites on the Isle of Wight 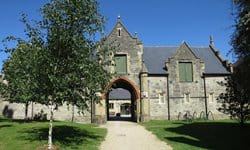 Completed in 1912, Quarr Abbey is one of the most important examples of early 20th century religious architecture in England. The church and monastic buildings, Grade 1 listed, were built using Belgian brick using a combination of French, Byzantine and Moorish architectural styles. The abbey is not far from the 12th century, Cistercian monastery. Although only just completed, the Guest House was used as a convalescence home for soldiers returning from France during the First World War. [Website]