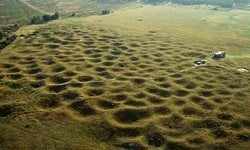 The only Neolithic flint mine in Britain that is open to visitors, Grimes Graves is a truly unique attraction. What initially appears as an unusually lumpy field reveals itself to the visitor as the site of around 400 deep pits cutting into the earth. It was from these that the Britons of the New Stone Age mined the flint which was vital to their survival. Artefacts deposited in the depths of the mine suggest a ritualistic dimension to this practice. An information centre provides an overview of the site, while visitors can climb down nine metres into one of the shafts. Photo © English Heritage

Situated on a hill overlooking the village of South Creake and affording impressive views of the adjacent landscape, Bloodgate is one of the many hillforts established across Britain during the Late Bronze and Iron Ages. Among the largest of the six examples known in Norfolk, it serves as a reminder of a time when Britain was fragmented among increasingly militarised tribal communities. Unfortunately, subsequent agricultural activity has eroded many of the ramparts, although the Norfolk Archaeological Trust now preserves the site. Good for walkers. Photo © English Heritage 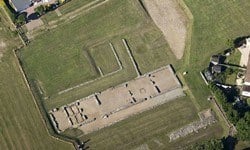 Built while southern Britain was part of the Roman Empire, the fort at Caister was likely designed as a defence from marauding Germanic seafarers along what Roman sources called the “Saxon Shore”. Romano-Britons built the fort around the start of the third century and continued to use it until the late fourth. The fort was home not only to between 500 and 1000 men, but also many of their family members too. Excavated in the 1950s, it provided much information about daily life in the Roman period. Owned by English Heritage, entry is free. Photo © English Heritage 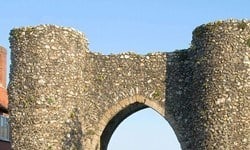 Following the Norman Conquest of 1066, the new colonial elite solidified its grip over the English with the building of motte-and-bailey castles throughout the land. One of William the Conqueror’s close associates, William de Warenne, established his new centre at Castle Acre. The fortification included three earthwork enclosures, in one of which was a stone house. This building was later upgraded into a great tower during ‘the Anarchy’, a 12th century civil war between rival claimants to the throne. Although this tower is much degraded, many of the castle’s earthworks and fortifications survive today. Photo © English Heritage 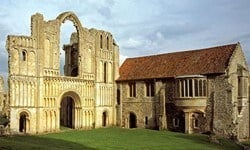 One of the best preserved medieval monastic sites in England, Castle Acre Priory was established in the late 11th century – although delays in construction meant that it was only consecrated in the mid-12th! It housed members of the Cluniac Order, a Benedictine reformist group originating in Burgundy. The Cluniacs had been invited to establish a monastery in Norfolk by William de Warenne, a Norman noble who had recently settled in nearby Castle Acre Castle. The monastery expanded and developed throughout the later Middle Ages but succumbed to King Henry VIII’s dissolution in the 1530s. Photo © English Heritage 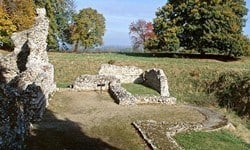 Once a small Norman chapel, Bishop Herbert de Losinga built this ecclesiastical site between 1091 and 1119 as his own private place of worship. Excavations have revealed that, prior to this, the site had housed a timber Anglo-Saxon church, perhaps the seat of the Bishops of East Anglia. In the 14th century, Bishop Henry le Despencer, a man notorious for his role in suppressing the Peasants’ Revolt, converted the chapel into a fortified private house. Many of the building’s ruins remain, and are freely accessible under the care of English Heritage. Photo © English Heritage 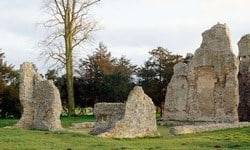 A rare example of a 12th century manor house, Weeting Castle was commissioned by Hugh de Plais to serve as his family home. In the mid-13th century, the de Plais family added a moat to better display their wealth and status. The Earls of Norfolk took possession of the manor in the late 14th century and eventually the building fell into disrepair and abandonment. Although not a castle as its name misleadingly suggests, this picturesque ruin provides an insight into life for the privileged few in medieval East Anglia. Photo © English Heritage 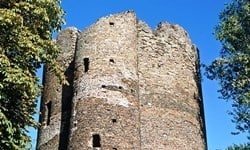 Commanding strategic views across the city of Norwich, Cow Tower is one of England’s oldest purpose-built artillery blockhouses. Built in the 1390s, it is located next to the River Wensum and has a height of over 15 metres. Its purpose was to defend the prosperous city from either domestic rebels or invading French forces. As well as having arrow loops through which defenders could fire crossbows and small guns at their enemy, it also contained cannons, a new development at the time. Jointly managed by English Heritage and Norwich City Council, entry to the tower is free. Photo © English Heritage 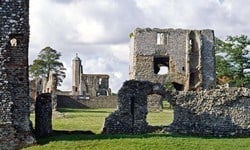 A 15th century manor house, Baconsthorpe Castle was home to the powerful Heydon family for over two centuries. The Heydons arose to prominence in the legal profession, allowing them to purchase the land and built their first house there. Over ensuing generations, the family furthered their power through the wool trade and dramatically expanded the site during the 16th century. To deal with their growing debt, the family demolished parts of the building in the mid-17th century. The surviving ruin is a Grade I listed building and is freely open to visitors. Photo © English Heritage 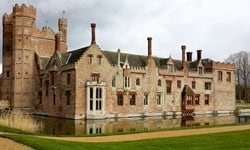 Oxburgh Hall is an impressive extant manor house with its origins in the twilight years of the English Middle Ages. Built by Edmund Bedingfield around 1482, it remained in his family for several generations, with new additions and alterations continuing to be made into the 19th century. Among the hall’s attractions are a famous priest hole created amid the turbulence of the English Reformation, and a needlework hanging co-produced by Mary, Queen of Scots during her imprisonment. Owned by the National Trust, Oxburgh Hall also boasts formal gardens and a woodland walk. Photo © DeFacto/Wikimedia

In 1094 William II ordered the building of a castle to replace the motte and bailey fortifications built by William the Conqueror in 1067. Originally designed as a royal palace, built with limestone from Caen in Normandy, Norwich castle was never lived in by any Norman kings. In 1894 the castle opened as a museum and is now the county’s principal museum and art gallery. Besides being able to see what Medieval life was like in a Norman castle keep, at certain times of the year the museum also offers guided tours of the castle’s battlements and dungeons – which are otherwise closed to the public. Photo © Andrew Hurley/Wikimedia [Website] 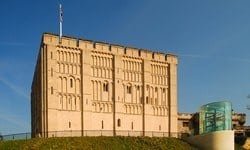 A local history museum that tells the story of West Norfolk, from prehistory to the recent past. There are two main exhibition halls. The first is given over to the recently discovered Bronze Age Seahenge. A replica and some of the prehistoric timbers are tell the story of this extraordinary site found in 1998. A converted Union Baptist Chapel built 1859 houses a series of cases display a fascinating collection of objects from as early as the Iron Age to more recent periods and events. These include a hoard of Iceni gold coins to Victorian fairground gallopers. Read More >> 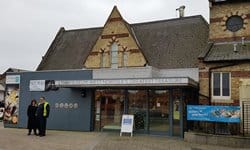 Swaffham Museum is housed in a townhouse on Swaffam’s Georgian market place. With a diverse range of artefacts, from local archaeology to 20th century Swaffham, a number of displays tell the social history of the town and its surrounding villages. Of particular interest to people of all ages is the Howard Carter gallery, which explores the world’s most famous Egyptologist’s links with the town and recreates his 1922 discovery of Tutankhamun’s tomb. The museum is a good starting point for exploring the town on a self guided history trail.