In Creswell Crags – a cave system in a picturesque limestone gorge – archaeologists have found Palaeolithic rock art – the only known example in England. Engraved into the walls of the cave are depictions of animals and several other motifs. Additional evidence of Palaeolithic activity comes in the form of stone tools and butchered animal bones, dating to between 50,000 and 10,000 years ago. The local visitor’s centre and museum organises guided tours of one of the caves. Photo © Nigel Homer/Wikimedia [Website] 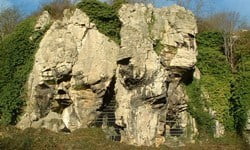 Oldox Camp is one of the many hillforts erected across Britain during the late Bronze and Iron Ages. Sub-oval in shape, the fort is surrounded by a double bank and single ditch. Although geophysical surveys and other non-destructive forms of archaeological investigation have taken place, the site has yet to undergo excavation. Accessible from the nearby Robin Hood Footpath, the site rewards visitors with impressive views of the surrounding landscape. To the north-west of the site is an older Bronze Age burial mound, now known as Robin Hood’s Pot after the legendary medieval folk hero.

For the late Middle Ages there are much fewer sites to visit that show what life was like for the lower classes. However, at the village of Laxton, a series of medieval field boundaries offer a glimpse into daily life for the lower classes. They testify to the allotment-like strips of land which was the basis of medieval agriculture. Information boards, a visitors’ centre, and a nearby Norman motte-and-bailey castle further assist the visitor in appreciating the realities of life in the later Medieval Laxton. Photo © James Hill/Wikimedia [Website] 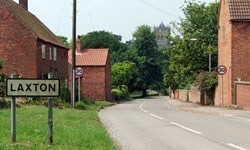 Mattersey Priory was a monastic settlement under the control of the only wholly English order: the Lincolnshire-based Gilbertines. Established amid marshland in the late 12th century, it remained a small and modest affair throughout the late middle ages. A 1279 fire destroyed much of the original structure; as a result, most of the surviving ruins date from a late 13th century rebuild. Amid the dissolution of the monasteries, the priory dissolved in 1538, after which Henry VIII handed its properties to a local landowner. Photo © English Heritage [Website] 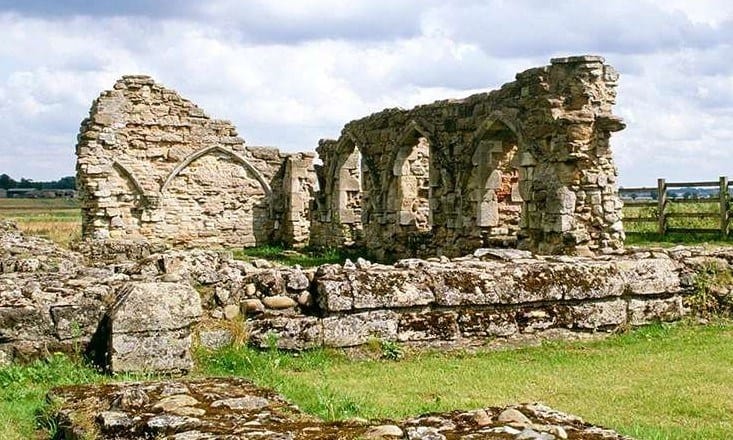 Probably beginning life as a Norman motte-and-bailey fortification, Newark Castle underwent substantial expansion in the mid-12th century under its then owner, the Bishop of Lincoln. Amid his feud with the Pope, King John later confiscated the site, and later died during a visit to the castle in 1216. Additions were made throughout the later Middle Ages, and it was again confiscated by the crown following the dissolution of the monasteries. A royalist stronghold during the English Civil War, it was part demolished following the parliamentarian victory. Current appearance owes much to 19th century restoration. Photo © Richard Nevell/Wikimedia [Website] 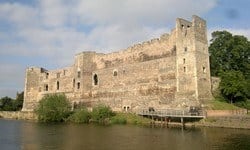 On the western edge of Sherwood Forest stands Thynghowe, an open-air assembly place or ‘thing’ that would have been important during the early middle ages, a tumultuous period of English history. Although the name ‘thing’ derives from Old Norse, the language of the Scandinavian settlers, it is possible that the site has a far older history. It may have been an assembly point for local Anglo-Saxons prior to the Viking invasions, and the mound atop the site possibly originates in the Bronze Age.

Now a country manor house, Rufford Abbey stands on the site of a medieval monastic settlement established by the Cistercian Order in the mid-12th century. Like most English abbeys, Rufford fell victim to the dissolution of the monasteries. King Henry VIII gave the confiscated land to the Earl of Shrewsbury, whose grandson converted it into a country house in the latter 16th century. Further remodelling took place in the 17th, while several ice-houses were added in the 19th, of which two remain. Owned by Nottinghamshire County Council, the site is co-managed by English Heritage. Photo © English Heritage [Website] 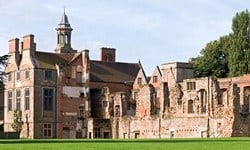 Consisting of 3,800 acres of farmland, open heath, and woodland, Clumber Park was once a grandiose country estate. A manor house was built on the site during the 18th century, although was largely destroyed in an 1879 fire. Subsequently rebuilt by the architect Charles Barry, Jr. for the Duke of Newcastle, it was abandoned by the 1920s and demolished in 1938. Among the surviving built features are a Grade I-listed Neo-Gothic church and Europe’s largest double avenue of lime trees. Now owned by the National Trust, much of the park is a designated Site of Special Scientific Interest. Photo © Paul Buckingham/Wikimedia [Website] 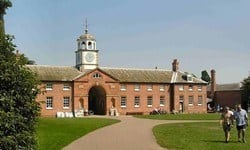 Life for the poor in 19th century England was difficult. For those trapped in total destitution, the workhouse offered accommodation and employment within a regimen of rigid discipline. The Workhouse at Southwell was one of the first of its kind, designed by William Adams Nicholson and built in 1824. Intended to house 160 inmates, it remained in practical use as accommodation for vulnerable women into the 1990s. The threat of it being converted into flats resulted in the National Trust stepping in to purchase the property, which now operates as a museum of social history. Photo © Andy Stephenson/Wikimedia [Website] 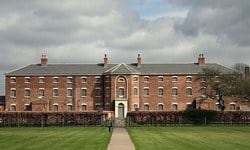 Built in 1905, this semi-detached suburban house is a well-preserved monument to middle-class life in the early 20th century. In the 1920s, it was home to William Straw, the owner of a local grocery company. After his sudden death in 1932, his family decided to preserve the house exactly as he left it. It remains that way to this day, a frozen snapshot of life for the Straw family. Now owned by the National Trust, the house can be visited as part of small tour-groups. Photo © Richard Croft/Wikimedia [Website] 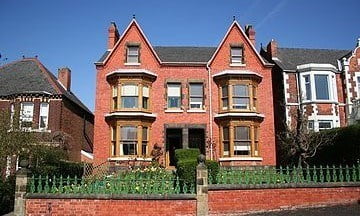