Popular Things to Do in Somerset

From Romans to Georgians: Top Ten Things to do in Bath

The only true hot springs in the United Kingdom are in Bath, a city in Somerset that more than any other has been shaped over two millennia by those thermal springs. Iron Age communities that settled in the hills surrounding the springs worshipped here. The Romans came and stayed, building a large bathing and ritual complex. Over the centuries since these early beginnings the very same springs have remained at the heart of continued developments in the city, creating a truly unique destination. With 2,000 years of history to choose from, the following are my suggestions for the top things to do and see in Bath … Continue Reading >> 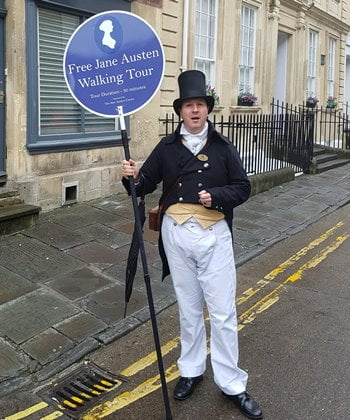 As a young boy I was fascinated by tales of swash-buckling pirates … three decades on and not much has changed. So where better to discover stories of real life pirates than Bristol – a city where echoes of the name ‘Blackbeard’ are still heard today. What happened here at Bristol’s docks and harbour during the 18th Century? Why do locals speak of historic pubs in reference to pirates? Who was the legend known as ‘Blackbeard’ … Continue Reading >> 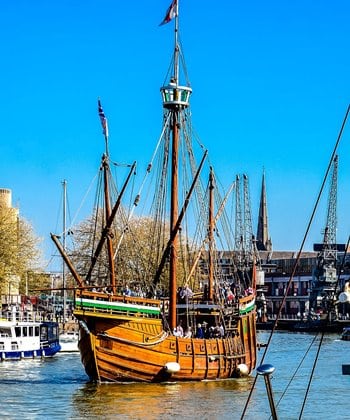 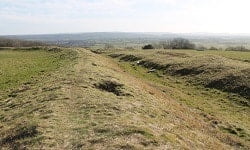 Maintained by the National Trust, this small Iron Age hillfort in Clevedon offers far-reaching views to the Somerset Mendip Hills, and across to the eastern shore of the Bristol Channel. It lies upon a natural ridge on Cadbury Hill and is oval-shaped in plan. It is thought to have been constructed by a local tribe called the ‘Dobunni’. Two concentric earthwork embankments and ditches define this fortification. There is a grand entrance to the north which may once have been gated. This site is also ideal for walking and wildlife. [Website] 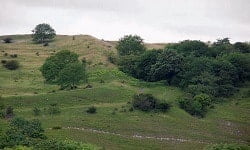 The impressive site of Dolebury Camp is home to the largest hillfort on Mendip. Located near Churchill, it dates to the Iron Age and is univallate in layout. Built from stone, the inner bank reaches 6 metres in height, followed by a large dich and bank, and with some outer defences towards the eastern-ridge. This fort is extensive in size, covering an area of 9.1 hectares. It is believed to have been occupied into the Roman Period. Later associated earthworks exist within the boundaries – including a 17th century or later rabbit warren. 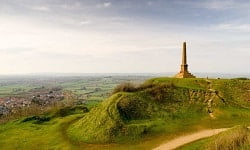 Ham Hill is Britain’s largest Iron Age hillfort, covering around 80 hectares of countryside. Located near Yeovil in Somerset, the site was occupied from the Neolithic Period until Roman times. A series of excavations revealed a range of finds here including a Bronze Age dagger, Roman military items and Glastonbury Ware pottery vessels. Human remains were also discovered within the interior of the L-shaped fort. Ham Hill is also a nature reserve and country park and offers plenty of opportunity for walking and views. Photograph © Historic UK. [Website] 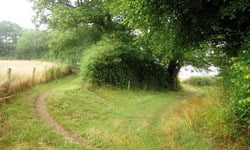 This Bronze Age enclosure and Iron Age hillfort overlooks the beautiful Vale of Taunton Deane. The enclosure situated on the eastern side of the hill dates to about 1300 BC and has produced some notable finds such as a horde of bronze bracelets and three axes. The later, Iron Age ramparts are from around 500 BC and are still visible today as earthwork banks. The site also saw continued occupation throughout the Roman Period in Britain. Today, the hillfort can be explored by nature trails. Photograph © Derek Harper. 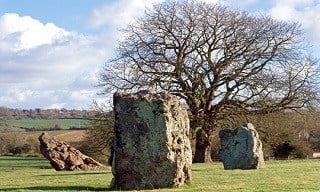 In the quiet little village of Stanton Drew, happens to be one of the largest collections of prehistoric standing stones in England. There are three stone circles – the ‘Great Circle’ is made up of 26 upright stones, measuring 113 metres in diameter. Whereas, the circle’s to the north-east and south-west are much smaller. Geophysical survey of the area has produced evidence of numerous burning pits once existing within the ‘Great Circle’ – suggesting the site to be more complex than previously thought. Nearby are three more large stones called ‘The Cove’. [Website] 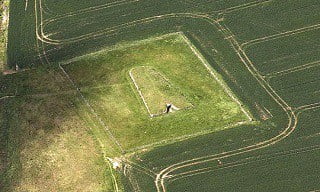 The rural landscape of Wellow in North East Somerset is home to one of the finest accessible Neolithic long barrows in the country. It most likely dates to about 3500 BC, and runs 30 metres in length with the central passage leading to multiple side chambers. The dry stone walls are roofed with overlapping stone slabs, and the tomb’s front is an assembly of upright standing stones. Human remains were found inside the burial chambers during a 19th century excavation, but what happened to them after this remains a mystery. [Website] 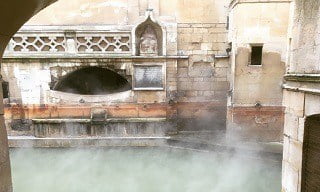 The famous Roman baths in Bath attracts millions of visitors every year. Incredibly well-preserved, the bath house harboured natural hot springs and was used for public bathing during Roman times. The multi-building complex here began with the construction of a temple around 60-70 AD. Today, the site is comprised of the ‘Bath House’, the ‘Sacred Spring’, ‘Roman Temple’, and a museum. There are many artefacts on display from Roman Bath, and the opportunity to drink water pumped from the spring. Photograph © Jason Summers [Website] 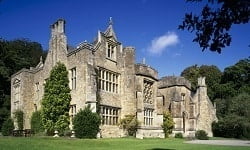 Clevedon Court is located in the attractive seaside town of Clevedon in North Somerset. The manor house was constructed in the 14th century as a prestigious home. Its standout feature is the largely intact medieval great hall with original screens passage. Sir John Clevedon built the property around a 13th century tower, with many structural additions being made to the property by its various owners over the years. The stunningly designed terraced gardens were laid out in the 1700s which incorporated the surrounding medieval earthworks. [Website] 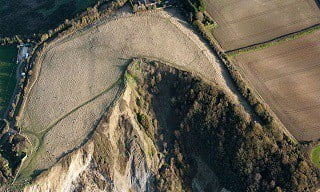 Standing in ruin on a dramatic cliff top setting, Daws Castle at Watchet commanded the landscape during the time of King Alfred to defend against the Vikings. Like the castle, the surrounding cliff top has gradually crumbled over the centuries. As a result, the ramparts have been reduced in size significantly, and would have originally been semi-circular in plan. There may have been a fortress or settlement here from as early as the Iron Age – though what remains of the Anglo-Saxon burgh seen today was built around 878 AD. [Website] 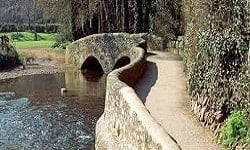 Dunster Gallox Bridge in Dunster, Minehead, is a standing symbol of the Medieval market trade. It was once known as ‘Gallows Bridge’, it was regularly crossed by packhorses carrying fleeces all the way from hills of Exmoor. Believed to have been built in 15th century, it is narrow in design with double arches and stone parapets. It goes across the river Avill and would have been integral to allow access for incoming deliveries of wool and cloth. It was these industries that brought wealth to Dunster as a market town. [Website] 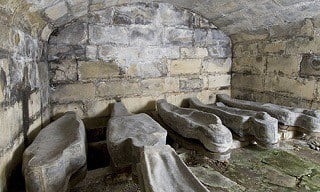 Explore the remains of this 14th century castle which belonged to the controversial Hungerford family for 300 years. Sitting in a scenic river valley in Frome, these ruins have many a chilling story to tell, such as the imprisonment of Lady Elizabeth Hungerford in the ‘South West Tower’. Incredible medieval wall paintings, and the family’s tombs still survive in the old chapel – while artefacts can be found on display within the ‘Priest’s House’. Most chilling is the collection of lead coffins, human in shape, which lay undisturbed in the castle’s crypt. [Website] 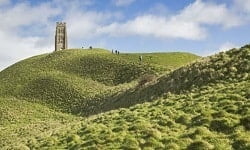 The famous site of Glastonbury Tor has a rich history and is visited by both tourists and pagans. The summit showcases the only remaining structural landmark – the iconic 15th century tower. Archaeological excavations have revealed that this building was once part of a medieval church of which there were two on the hilltop. Stunning scenery can be viewed from here. Although today a place of spiritual belief, the Tor has a bloody past. Thomas Cromwell ordered the execution of Abbott Richard Watling which took place here in 1549 AD. [Website] 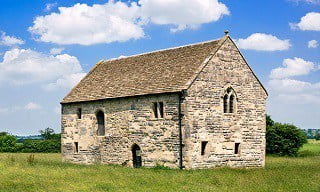 This monastic building in Meare was built for Glastonbury Abbey sometime around 1330 AD. It was owned by the monks throughout the majority of the Medieval Period, until the dissolution of the monasteries in the 16th century. There was once a fresh water lake nearby, and the house was used as a fish-salting and drying facility, and as an occasional residence for the official overseeing the fishery. There was also a manor house less than 300 metres away, the remains of which are now part of agricultural land owned by Manor Farm. [Website] 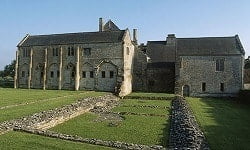 The dissolution of the monasteries in 1538 AD had a devastating impact on England’s architecture: the demolished ruins at Muchelney Abbey are a living reminder of this pivotal period. Found in the village of Muchelney on the Somerset Levels, it was once an affluent Benedictine residence. A visit here offers the chance to see the foundations and remains of the old medieval abbey, the ornately decorated cloister walk, and explore the beautiful rooms of a Tudor house. There is also England’s only complete thatched monks’ lavatory to marvel at. [Website] 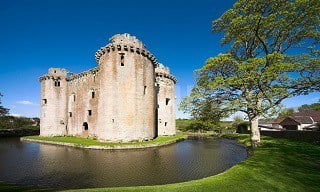 The impressive moated Nunney Castle was built sometime around 1370 AD. Located in the historic town of Frome, the defences were built by a knight from the area called Sir John de la Mare. Now a ruin, the castle’s structural layout consisted of a tower with a conical-roofed turret at each of its four corners. There would also have been a courtyard originally. Nunney Castle was modernised in the 16th century but suffered significant damage during the English civil war. Remarkably, much of the main structure still survives. Photograph © David Hansford [Website] 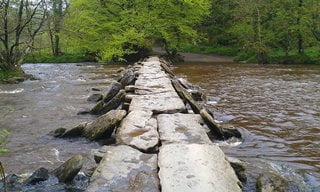 Tarr Steps is the local name for a Medieval clapper bridge in Exmoor Nation Park, western Somerset. At around 54 metres in length this is the longest surviving bridge of its kind. And some even suggest it is the oldest. The bridge is in an area known as the Tarr Steps Woodland, known for its abundance of plant life and small animals. It is also a favourite spot to visit in spring when the bluebells cover the floor of the woods. [Read More] 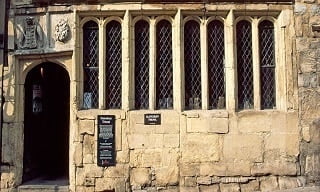 This ornate building in Glastonbury was built in the 15th century. Originally designed as a merchant’s house – it is thought to have been used as the courtroom for Glastonbury Abbey. The house’s features illustrate a transition from medieval architecture, with an early Tudor-style façade and interior panelling. Today, the site is home to the Glastonbury Lake Village Museum and tourist information centre. Important archaeological finds recovered from the 2000 year old Iron Age Celtic settlement at Glastonbury can be found on display here. [Website] 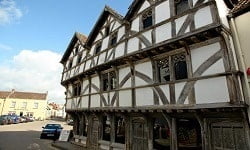 This charming early Tudor building in Axebridge, with its timber frame and jettied façade is owned by the National Trust [Website]. Built around 1500 AD, it was originally the house of a wool merchant. Today, it is home to a local museum run by the Axbridge and District Museum Trust. Inside are local collections spanning from prehistory, through to Roman, and Saxon times and beyond. There are also intimately themed exhibitions including a room which transports visitors to experience life as a resident civilian during WWII.