Exploring the Past in Nord-Pas-de-Calais

Nord-Pas-de-Calais is the northern most region in France, sharing a border with Belgium. Calais provides easy access between the United Kingdom and continental Europe, as it has since at least Roman times. The city of Lille has architectural styles from Belgium, the Netherlands and England. The departments in Nord-Pas-de-Calais: Nord and Pas-de-Calais.

Tackling my northern France bucket list by following in the footsteps of Roman leaders & emperors, Medieval nobles and kings, World War RAF pilots and their enemies. From the Roman town of Bavay (or Bavacum), to the Medieval walled town of Montreuil-sur-Mer to the Nazi Bunker of Éperlecques … Continue Reading >> 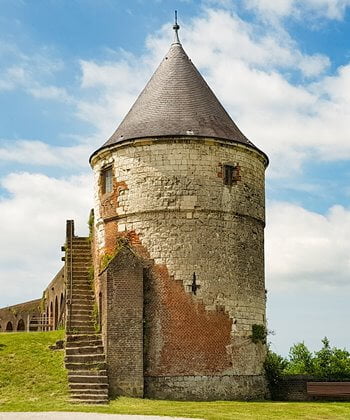 Bavay, or Bagacum Nerviorum, was an important meeting place for routes from Great Britain, Germany, and areas within France. To begin with these roads served a military purpose, but after the Roman conquest of Britain, the town’s strategic importance became more commercial. This is evident in the size of the forum here, said to be the largest outside Italy, of which a substantial part survives. [Website] The Medieval castle is now home to a wonderfully eclectic set of exhibitions of art and artefacts belonging to cultures from around the world. Of archaeological note is a superb collection of funerary objects from Ancient Egypt. The museum is home to the first collection in provincial France of ancient ceramics from Greece and Italy. Boulogne castle was built on the remains of Roman walls. Photo © Velvet [Website] Arkéos opened its doors to the public on 21 June 2014. The museum displays over 1,500 local artefacts, from the Palaeolithic to the recent past. Although still being constructed, the associated 75,000 metre-square archaeological park will show visitors what life was like at about 1000 AD – with a reconstruction of the first port of Douai and the Carolingian Abbey.
Photo © Arkéos [Website] Based on archaeological excavations, this 6-hectare archaeological park, part of the Parc du Heron bird sanctuary, has life size reconstructions of the living structures from each of the main periods of prehistory. From Palaeolithic animal hide tents to Medieval houses, the reconstructions demonstrate the development of housing in northern France over the last 6,000 years or so. [Website]

The Museum of Fine Arts of Lille The Palais des Beaux-Arts de Lille is the largest museum outside of Paris. It was one of fifteen French cities to have had museums built under instruction from Napoleon I as part of his drive to popularise art. Although a fine arts museum, archaeological collections include substantial Egyptian and Sudanese antiquities, as well as a large collection of Etruscan, Roman Greek ceramics. Photo © Udimu [Website]