Exploring the Past in Normandy

As any visitor to Normandy will attest, fields of cows and orchards full of apple trees are everywhere. This northwestern region of France attracts many visitors to see the memorials and monuments of the D-Day Beaches of World War 2, not far from the city of Caen. Further back in time, Rouen was one of the largest and richest cities of Medieval Europe. Also a city where Joan of Arc is thought to have been burned at the stake. Where Monet painted his famous cathedral series. The Seine River Valley is know too for the many beautiful abbeys and monasteries. Normandy was heavily attacked by the Vikings from the 9th century onwards. Normandy was the site of many conflicts, including the Normandy Campaigns in the early years of the 1200s, the Hundred Years War from 1337, and the 16th century Wars of Religion. Each of these has had a visible impact on the built environment, and what it is that tourists come to see. 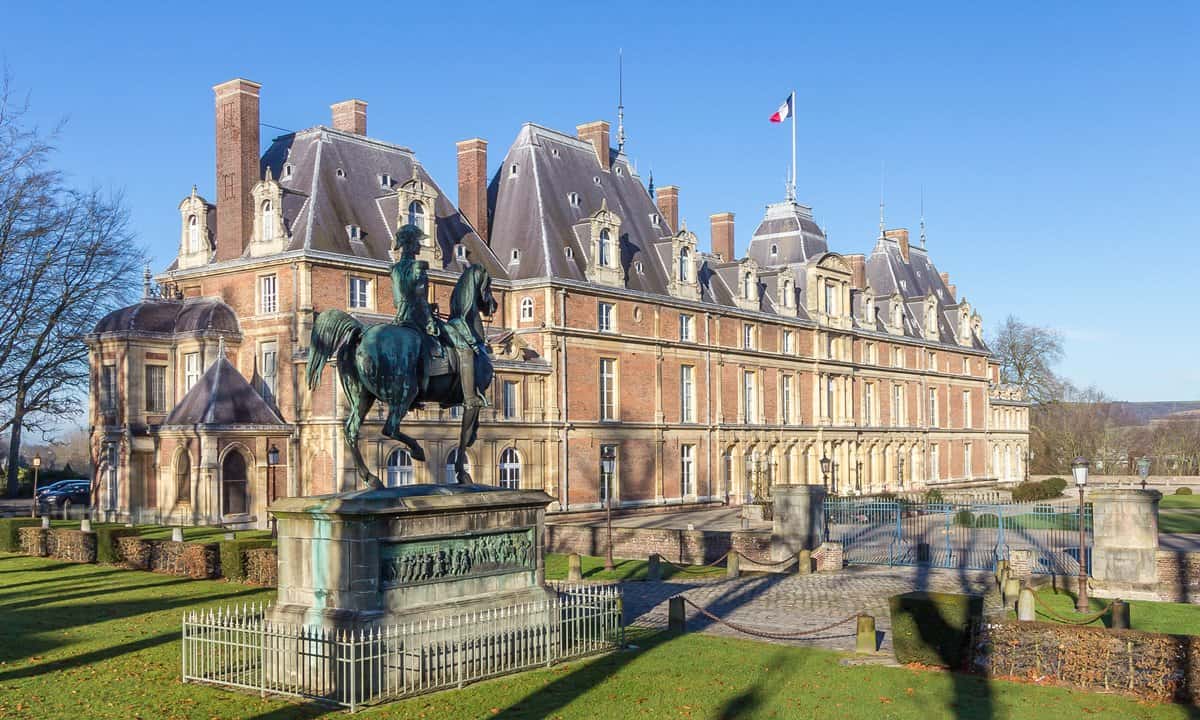 Fortresses and Castles in Normandy

Normandy has a number of great fortresses and castles to visit. From the fortified town and abbey on Mont Saint Michel to the castle forts associated with such important historical figures as Richard the Lionheart and William the Conqueror. At the northern end of Normandy is Château d’Eu, a royal residence from the 16th century and later King Louis-Philippe’s summer residence. As English and French rulers fought over Normandy for centuries, so the fortresses and castles developed, in appearance and function.
Find Fortresses and Castles to Visit in Normandy >> 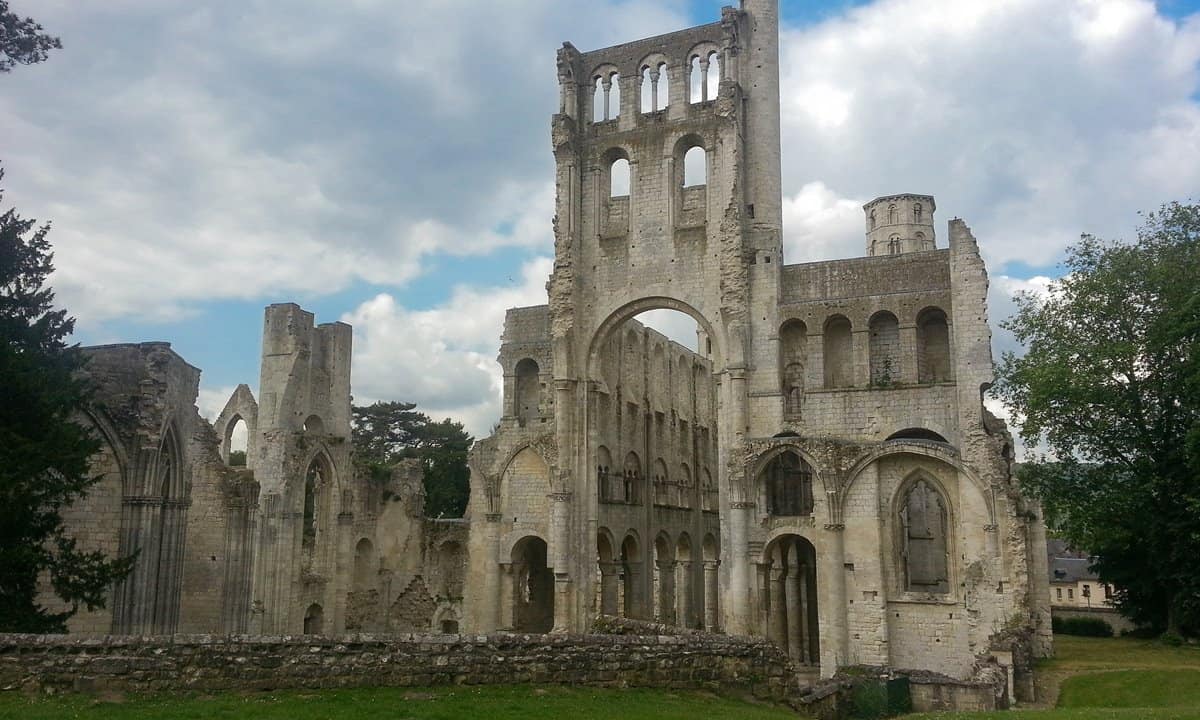 Monasteries and Abbeys in Normandy

Normandy is where you will find the world’s most well known and frequently visited medieval abbey, namely Mont Saint Michel. Scattered around this vast northern region of France, however, are many other equally spectacular monasteries and abbeys. Given the age of some of these religious sites it is perhaps not surprising that some, like those at Savigny and Saint-Evroult, are now in ruins. So evocative is the ruined Benedictine Jumiéges Abbey that it has frequently been described as France’s most beautiful ruins.
Find Monasteries and Abbeys to Visit in Normandy >> 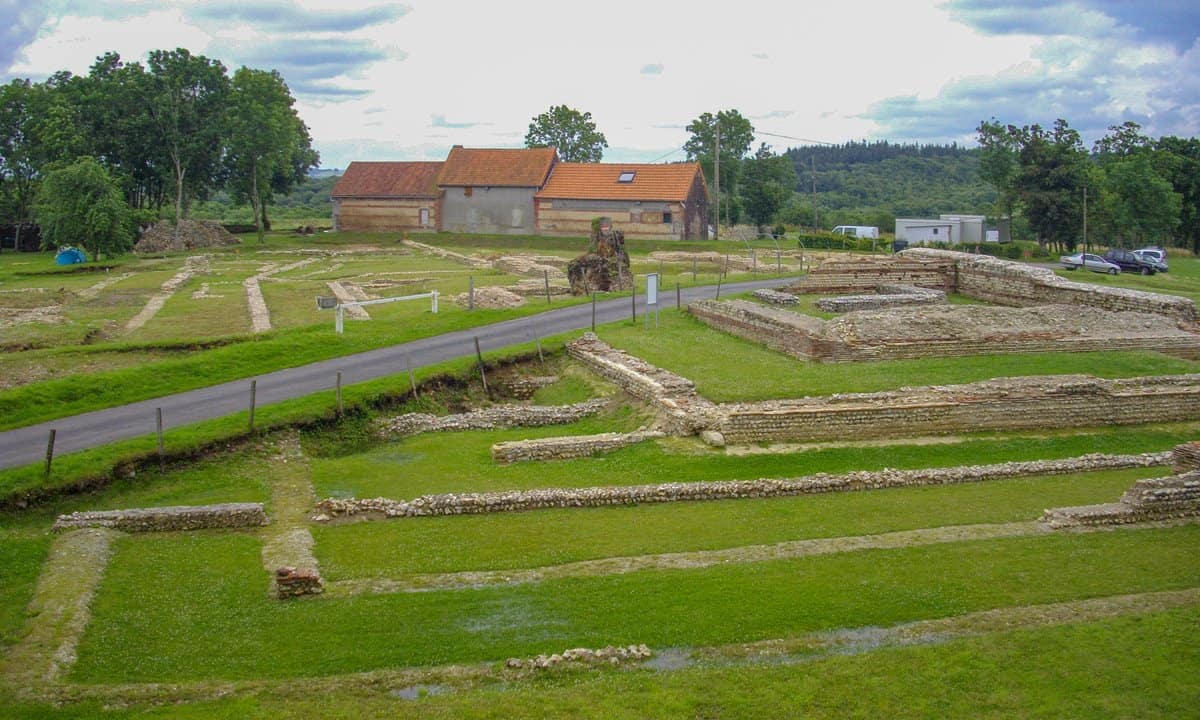 Exposed remains of the temples and the basilica.

After the French Revolution workmen were digging the foundations for a road through the forest near the city of Eu. They cut through the walls of a Roman building. After several decades of excavations the remains of a medium sized Gallo-Roman town have been uncovered, with typical architectural features such as a theatre, a forum and public bath houses. From the first century AD onwards, the Romans developed a substantial sanctuary complex on the site of what had been a Celtic shrine.
Map of France | Map of Roman Sites and Museums 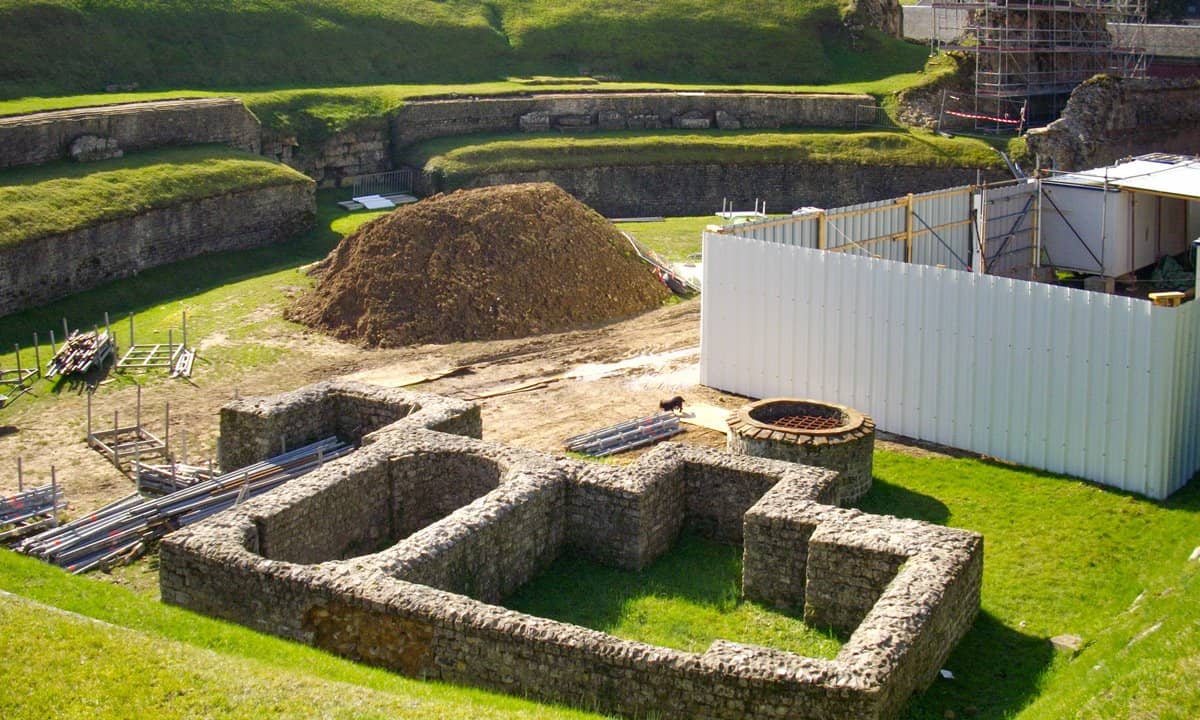 Restoration work on the ruins of the Roman theatre.

Lillebonne is located on the north banks of the Seine River. From the 1st to the 3rd centuries AD the town, then called Juliobona by the Romans – a homage to Julius Cesar, was a prosperous supply base on the channel between Gaul and Britannia. The Romans abandoned the town towards the end of the third century when it was invaded by barbarians. The theatre is the most prominent, but not the only Roman feature of the town today. The museum opposite has an extensive collection of local artefacts.
Map of France | Map of Roman Sites and Museums 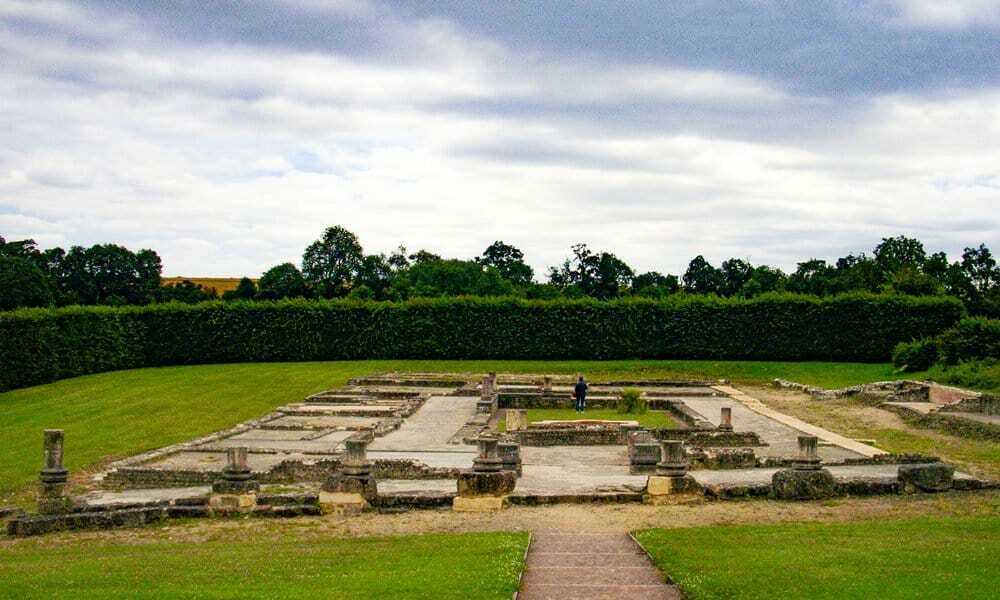 During the 1st century AD Aregenua became the capital of the Viducasse Celtic tribe. Situated at the crossroads of two Roman roads, the town became an important commercial staging post. Aregenua and Juliobona are the only two capital towns in Gallo-Roman Normandy that did not develop into medieval towns following the withdrawal of the Romans. Excavations have revealed many features, of which have been partially reconstructed, and this research se continue to reveal more.
Map of France | Map of Roman Sites and Museums | Visitor Information 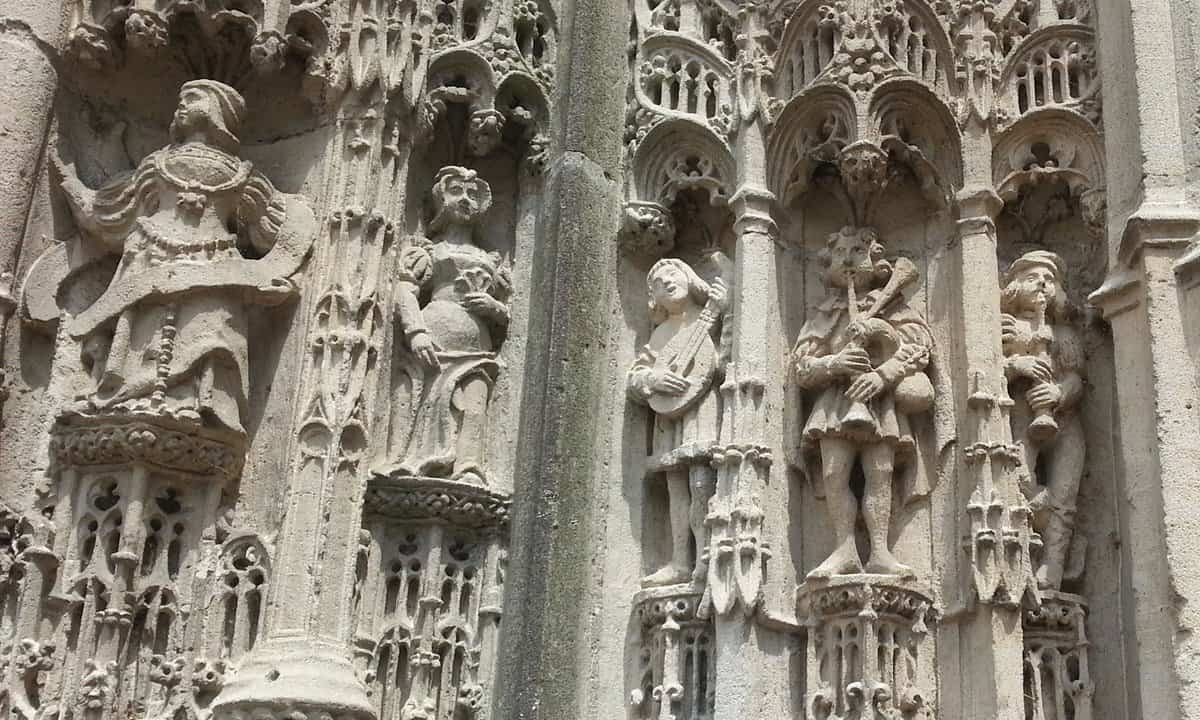 A portion of the finely carved west portal of the church.

King Henry IV of France is said to have declared this church to have been the most beautiful chapel in his kingdom; and it is not difficult to see why. Typically flamboyant Gothic in style, the highlight of this church is the finely decorated west portal. Here you will see 333 beautifully sculptured human figures, each representing the various saints and other aspects of daily life. Of special interest is a figure playing an old Norman musical instrument – the Loure, a bag-pipe no longer played in Normandy.
Map of France | Visitor Information 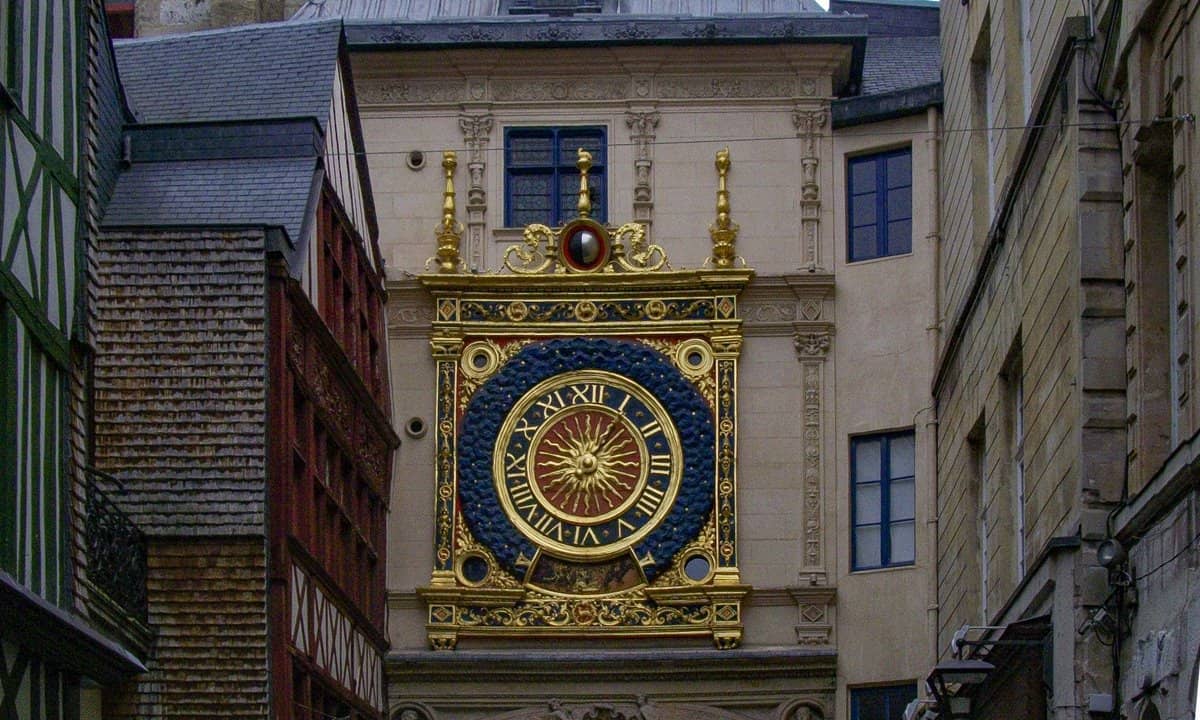 One face of the medieval clock of Le Gros Horloge.

Although heavily damaged during the second World War, the city of Rouen still has a spectacular Medieval and Renaissance sights. One of these is set in a Renaissance street-arch, a beautifully decorated astronomical clock. Known as Le Gros Horloge, the mechanism was made in 1389, making it one of the oldest, working clocks in Europe. Visitors can take a behind the scenes tour to see the clock mechanics. The dials, 2.5 m in diameter are best viewed from the street.
Map of France | Visitor Information 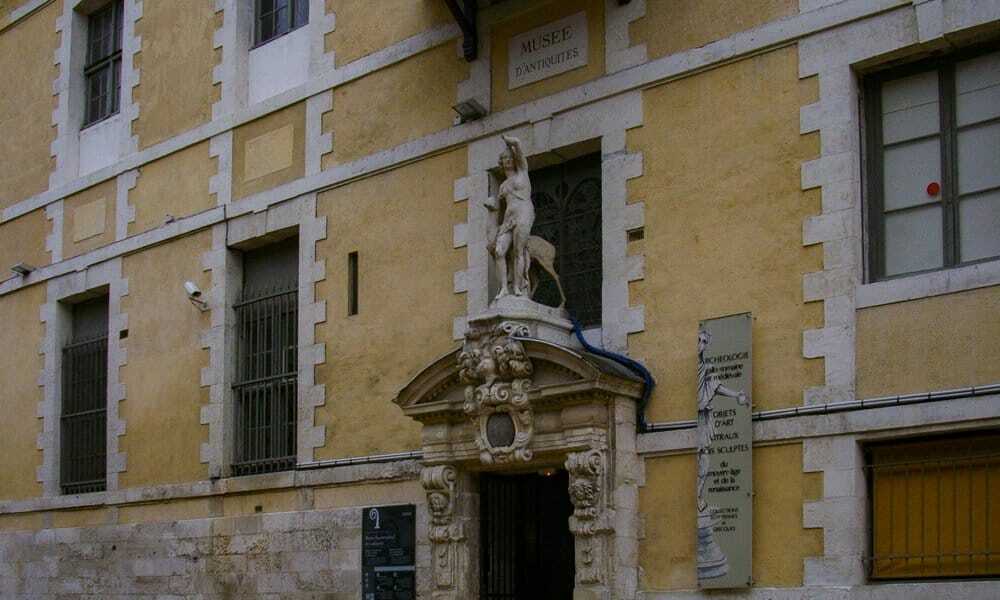 The entrance to the museum of antiquities.

Established in 1831 specifically to receive and display artefacts recovered from the excavations of Gallo-Roman sites in Lillebonne, the highlight of which is a mosaic floor. Since then it has become the departmental museum of antiquities for the Seine Maritime Department. Now, with numerous and varied collections, this museum tells the history of Normandy from the Bronze Age to the Renaissance. Thanks to private donations, the museum also has a fine collection of Egyptian antiquities.
Map of France | Map of Roman Sites and Museums | Official Website 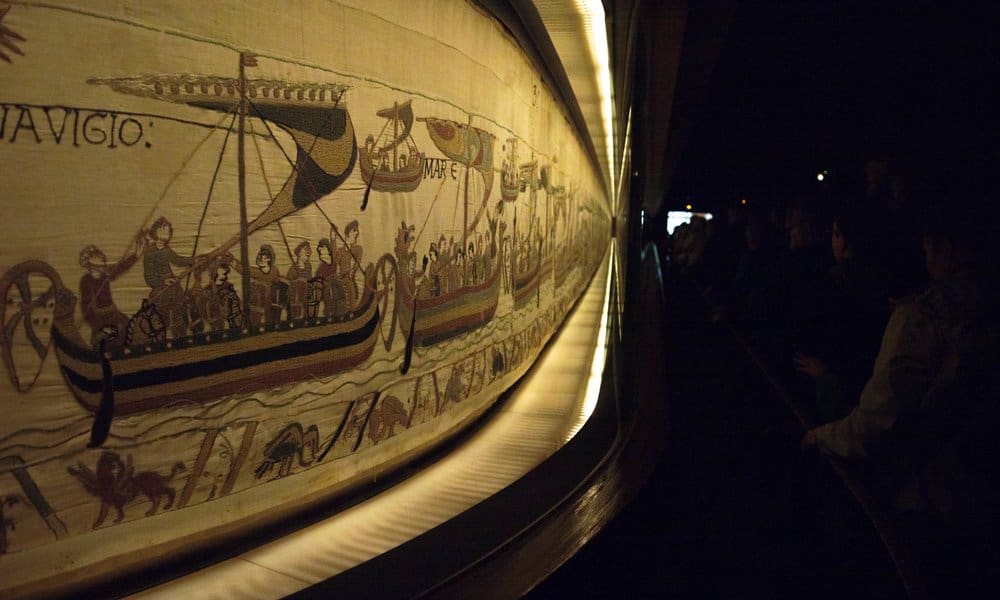 The Bayeux Tapestry is neither a tapestry nor was it from Bayeux. Rather, it is a 70 m long cloth on which embroidered scenes tell the story of the conquest of England by William, then Duke of Normandy. Thought to have been commissioned in the 11th century by the Bishop of Bayeux (Odo, William’s half brother) to tell the story of the invasion of Britain. There is no agreement on where the fabric was embroidered – although many think it was probably a monastery in the south of England.
Map of France | Official Website 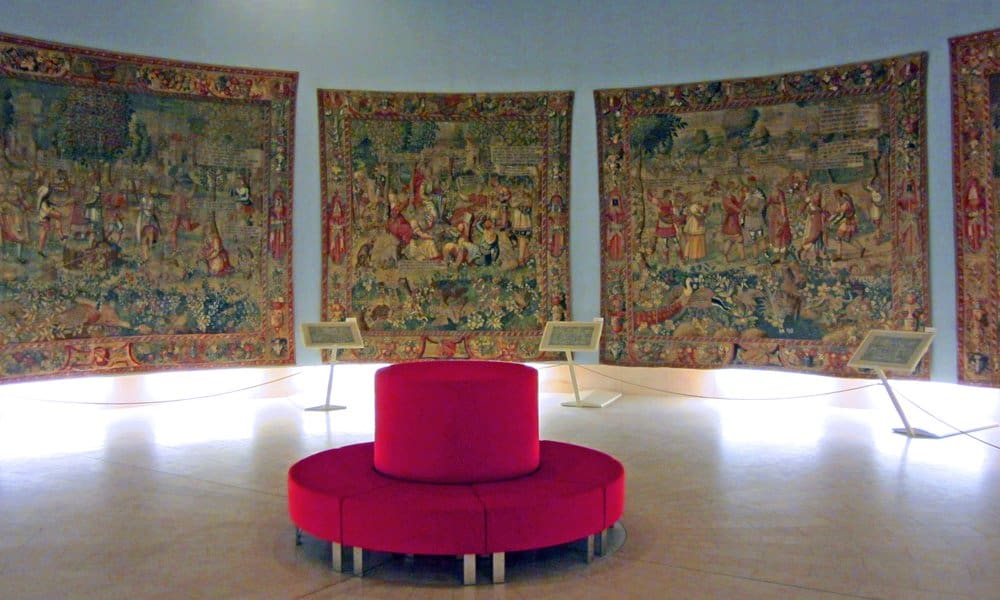 Founded in 1835 as a local and natural history museum, by the second half of the 20th century the museum was an established fine art museum. The museum has an impressive range of French art from the 17th to 20th century, as well as a fine collection of tapestries from the 16th to 20th century. Also on display are archaeological objects from sites around the St Lô region. One highlight being the celebrated Thorigny Marble (an inscribed sandstone statue base) from the Roman town of Vieux-la-Romaine.
Map of France | Map of Roman Sites and Museums | Official Website