Exploring the Past in Pays-de-Loire

The Pays-de-Loire region begins in the east with the last of the extravagant castles at Saumur and follows the Loire Valley through gentle rolling countryside to the Atlantic. Although the city of Nantes is the region’s capital it was a major city in the historic province of Brittany. Breton influences in the western part of the region are strong. The departments in Pays-de-Loire: Loire-Atlantique, Maine-et-Loire, Mayenne, Sarthe and Vendée. 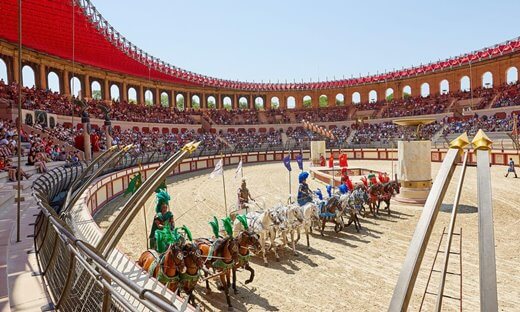 Living History in the Vendée

Voted the world’s best park, and known for being a theme park without rides, Puy du Fou has four separate period villages that focus on living history of the period, but it is the shows for which it receives the highest accolades. With ten spectacular historical themed shows which range from American War of Independence, Vikings, Roman Circus, Knights of the Round Table and World War I, the shows are the focus of a visit to the park.
Continue Reading >> Located in a southern suburb of Saumur, the Dolmen de Bagneux is thought to the biggest of its kind in France, and perhaps even Europe. This dolmen, a typical Neolithic portal tomb – the chamber would have been used within which to place bodies of the dead, is made up of 15 very large stones. The collective weight of these megaliths is estimated at approximately 500 tons. There are historical records of excavations in 1775, but no burial remains were recovered. Not surprising given the structure had been used as a barn. © Manfred Heyde As tumuli go this is one of the larger ones, with a diameter of 28 metres and a circumference of 120 metres. Within the earthen mound there are two passages, each of about 11 metres in length and each lead to inner burial chambers. At some point in prehistory the tumulus was refashioned, and a cairn was constructed over the burial chambers. These chambers face south east and it is said that at the winter solstice the winter sun’s rays shines down each of the passages to the chambers. This Gallo-Roman amphitheatre is thought to have been one of the largest in north-west France. The typically elliptical arena measures 44 by 39 metres, with a semi-circular cavea thought to have been able to seat around 5,000 spectators. The basic outline and shape of the amphitheatre, as well as a number of architectural features, is well preserved and easy to see, but they have been enhanced by extensive excavations. These include three rooms at the edge of the arena that would have been used for performers. An isolated dolmen in a private field on the outskirts of the town of Gennes, on the banks of the Loire River not that far from Saumur. There are a number of these megalithic sites in the area – but this one is one of the larger ones – measuring 14 metres in length and with an interior height of 2.7 metres. Like many of the more substantial dolmens it has been used by local farmers for centuries. This particular dolmen was used to house a large bread oven; the remains of which are still present in the chamber … go to Madeleine Dolmen. A large cairn made up of local schist stone with three distinct tiers that rises to a height of 1.9 metres, it measures 10 by 12 metres. Within the cairn there are two passages, each leading to a rectangular burial chamber. Both passages are oriented to catch the rising sun at the winter solstice. Today the tumulus is situated right next to a road in public space amongst the houses of a residential area in the town of Pornic.
Photograph © Elisecoline The modern-day town of Jublains has its origins as the Gallic capital of the Diablintes tribe. By 65 AD, the town had taken on many distinctive Roman features. The public baths, the theatre, the temple, and the fort are strikingly well preserved and attest to the Roman town’s strategic significance positioned on an important route between the Loire Valley to the south and the channel to the north. A new museum has a good variety of some of the finest artefacts from the site on display … go to Jublains. Saint-Nazaire town centre has a square du Dolmen on which there is a menhir and a dolmen. Although they look artificial, a number of small towns have or have had a dolmen or a menhir or two in communal spaces. Perhaps one of the stones is original, and others have been gathered from the surrounding area. A photograph from about 1903 shows the dolmen in place, but not the menhir.
Photograph © Poulpy