Exploring the Past in Baden-Württemberg

The Roman fort at Aalen is the biggest fort north of the Alps. This fort was part of the German Limes, the defensive wall along the northern edge of the Roman Empire on the European continent, and inscribed on the UNESCO list of World Heritage sites. Next to the foundations of the fort is one of the biggest Roman museums in Germany, that exhibits objects from various excavations showing what military and civilian life was like in the area about two thousand years ago. [Website] Photograph © Haselburg-müller 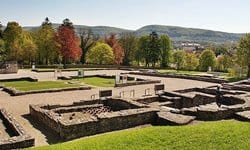 Ellwangen Abbey was the first Benedictine Monastery in the historic Duchy of Swabia. The monastery was established in 764 by two brothers, Herulph and Ariolf. In 814 it became an Imperial Abbey, under the protection of the Holy Roman Empire. Although the abbey was dissolved during the secularisation of 1802, most of the buildings are still in tact but not used for ecclesiastic purposes. Consecrated in 1233, the Late Romanesque St. Vitus Basilica is today the Paris church of Ellwangen. Photograph © Moros 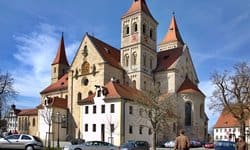 From about 1460 AD the castle of Zllwangen served as the residence of the Prince-provosts. Although the castle was remodelled in a Baroque style around 1726, visitors to the castle can still see evidence of its earlier architectural grandeur. Today the castle is administrated by the State of Baden-Württemberg, and it hosts a museum with permanent exhibitions that comprise spectacular objects from over 1,200 years of the building’s history and influence in the region. Photograph © Bernd Haynold [Website] 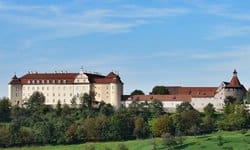 The town of Ellwangen an der Jagst was established in the 7th century as an Alemanic settlement. The Alamanni were the first Christians in southern Germany, and with numerous archaeological artefacts from the area the Alamannenmuseum concentrates on the last five hundred or so years of their history. Of particular interest is the rich collection of gold and silver-work. The museum also has an active programme of events that focus on various aspects of Alamanni life. Photograph © Alamannenmuseum [Website] 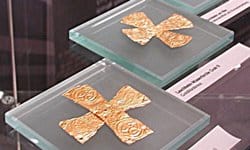