Exploring the Past in Brandenburg

Surrounding the city-state of Berlin, is a region that has some 3,000 lakes and over 30,000 kilometres of waterways. Besides being Europe’s most extensive and picturesque landscape of rivers and lakes, Brandenburg has an involved and fascinating past. Once part of the Roman province of Magna Germania, the region went on to become the Northern March, then one of the electoral states of the Holy Roman Empire, the seat of the Kingdom of Prussia, and also the core of the German Empire. Potsdam, the state’s capital, is home to numerous parks and palaces constructed between 1730 and 1916 and not surprisingly inscribed on the UNESCO list of World Heritage Sites. It was in one of these palaces, the Cecilienhof Palace – the most recently built, that world leaders met in 1945 to discuss the future of post-war Europe.

The town of Potsdam, with vast royal parks and magnificent palaces, has played a prominent role in the history of Europe. Until 1918 it was here that the Prussian kings and the Kaiser had their residences. The Palace of Sanssouci is often described as a German Versailles. After World War Two, the post-war meeting of the allies took place here – the so-called Potsdam Conference. The vast parks have an eccentric collection of replica structures from all over the World, including Roman Baths, a Chinese House and an Egyptian Obelisk – with enigmatic heiroglyphs that are truly a sign of their times. Potsdam is a popular and worthy day-trip from Berlin … Visit Potsdam >> 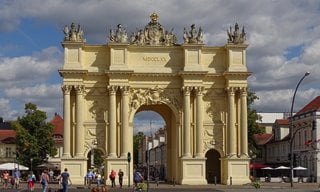