Exploring the Past in Lower Saxony

In 9 AD an alliance of Germanic tribes ambushed and defeated three legions of Roman soldiers in the Teutoburg Forest. For a long time this clash was considered crucial in stopping Roman expansion into northern Europe. Nowadays historians believe it was the Rhine River that proved to be more of a barrier. Today the archaeological site of the Varus Battle near the village of Kalkriese is a 24 hectare park, with an award wining museum. The museum and park is open throughout the year, hosting activities for visitors of all ages. Photograph © Frerk Dörband [Website] 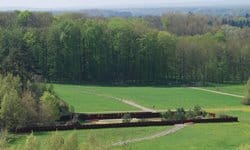