Exploring the Past in Mecklenburg-Western Pomerania

Discover the Hanseatic Town of Wismar

With Slavic origins and founded in the early 13th century, Wismar went on to become an important town during the era of the Hanseatic League, and again later when this part of northern Germany was under Swedish rule. Much of the Old Town’s character was influenced greatly during these two periods. A Medieval charm that has survived to this day with little damage; from extraordinary Brick Gothic cathedrals and patrician gable-fronted houses of the Hansa port, to the remains of the defensive system and other administrative buildings erected during the Swedish period. 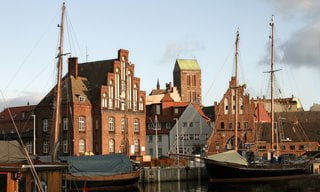 Set on a small island in Lake Schwerin, Schwerin residential palace is one of the most important examples of Romantic architecture in Germany. The spectacular neoclassical castle was built in the mid 19th century on the foundations of Slavic fortress dating back to the 10th century, and later buildings from the 16th and 17th century. This was the residence for the Dukes of Mecklenburg, and the beautifully restored stately rooms (including the sumptuous Throne Room) are open to the public. Today the castle houses a museum as well as the State Parliament of Mecklenburg-Vorpommern. [Website] 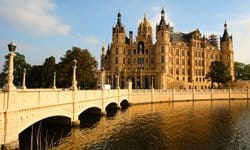