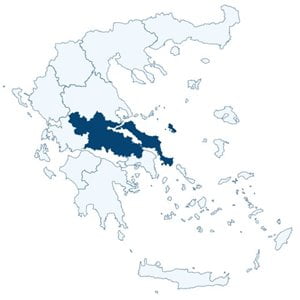 Exploring the Past in Central Greece

Mountains, Lakes and rivers, as well as a coastline on the North Aegean Sea define Central Greece. This is the most mountainous region in Greece, with some of the country’s highest mountains – including Mount Parnasus. Many of the archaeological sites in this region feature prominently in the mythology of ancient Greece. The regional capital is Lamia, and the five regional units in Central Greece are Boeotia, Euboea, Evrytania, Phocis and Phthiotis. Besides being an incredible archaeological site, loaded with mythology, Delphi has the most stunning setting on the side of Mount Parnassus overlooking the Phocis valley. The mountainside location did not hamper the ancient builders, the site has spectacular theatre, a 4th century BC Temple of Apollo, and a stadium that hosted the Pan-Hellenic Pythian Games every four years – the origins of the modern Olympic Games. Delphi is also the location of the Delphic Oracle and the ‘navel of the World’. [UNESCO Website] An important and rich archaeological site, its is thought that the Mycenaean tholos tomb here was built for Minyas, the mythical king of Orchomenus. During the Bronze Age Orchomenus was a wealthy centre of Mycenean civilisation – rivalling nearby Thebes, and this is reflected in the archaeology of the area. Archaeological excavations carried out over many decades, starting with those of Schliemann in the 1880s, have exposed a number of the town’s ancient features, including a Mycenaean palace, a cemetery and theatre. Thebes was a significant force throughout the history of Greece. And still today, scattered throughout the modern city of Thebes are the archaeological remains of the successive occupations of the area, from prehistory to the Byzantines. Unfortunately many of these sites are under-developed, although there is a programme of restoration currently underway. The city’s archaeological museum has extensive displays of artefacts recovered from various excavations that tell the story of the city.