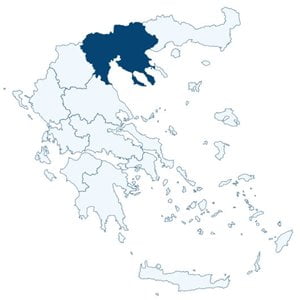 Exploring the Past in Central Macedonia With an excellent view of Mount Olympus, the ancient town of Dion grew up around a sanctuary dedicated to Zeus – who is said to have lived on Olympus. For ancient Macedonians this was an important sacred place, and since the end of the 5th century BC it was a leading centre for the ‘Olympian Games of Dion’, to honour and worship Zeus and his daughters. An archaeological walk has been created allowing visitors to experience the significant elements of the site. [Website] Open to the public in 1983, the Archaeological Museum of Dion was established to display the numerous artefacts and objects recovered from the archaeological site of Dion – a large fortified city occupied from the 6th century BC to the 5th century AD. Artefacts from other sites in the region, including those at the foot of Mount Olympus, are also on display here. Consequently the range of objects exhibited is vast, from exquisite marble statues and mortuary monuments to more mundane artefacts of daily life. Opened in the early 1960s, with new additions in 1980 and the early 2000s, the Archaeological Museum of Thessaloniki exhibits the Archaic, Classical, Hellenistic and Roman history of the city of Thessaloniki and also the region of Macedonia. The museum has an extensive collection of spectacular gold artefacts, including jewellery, coins and a range of vessels, from various important ancient Macedonian cemeteries. The museum also has an impressive collection of sculptures from Macedonia’s Archaic to Late Roman past. [Website] A relatively new museum, opened in September of 1994, it was established for the research and display of Byzantine material culture in Macedonia. The museum’s impressive collection of sculptures, frescoes, mosaics, icons and inscriptions are arranged in a series of permanent exhibitions that cover early Christianity in the region, and the middle, later and post-Byzantine periods. Temporary exhibitions are also regularly curated that add to what is on permanent display in the museum. [Website]