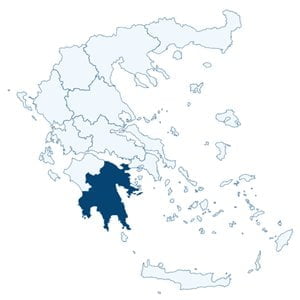 Exploring the past in the Peloponnese

The Peloponnese is that large peninsular that makes up the southernmost part of mainland Greece. Beautiful beaches, that are smooth and sandy while rugged and rocky elsewhere, contrast with mountains and forests inland. Here are a number of Greece’s most well known ancient ruins, including Corinth, Epidaurus and Mycenae. Of course there are many more medieval monuments, dramatic castles and fortresses and simple Byzantine churches. In March 1821 the people of this area declared war on the Ottomans, instigating the Greek War of Independence that lasted to July 1832 and resulted in the founding of the modern nation state of Greece.

The Land of Legends and Tales

In 2016 Lonely Planet named the Peloponnese the European destination of the year. Of course archaeology travellers have always known this, for it is here that visitors can see some of the most important archaeological sites in Greece. Here Mina Megalla, an archaeologist from Luxor and a long-time Archaeology Travel reader, tells us about his travel in this region and why he keeps going back. 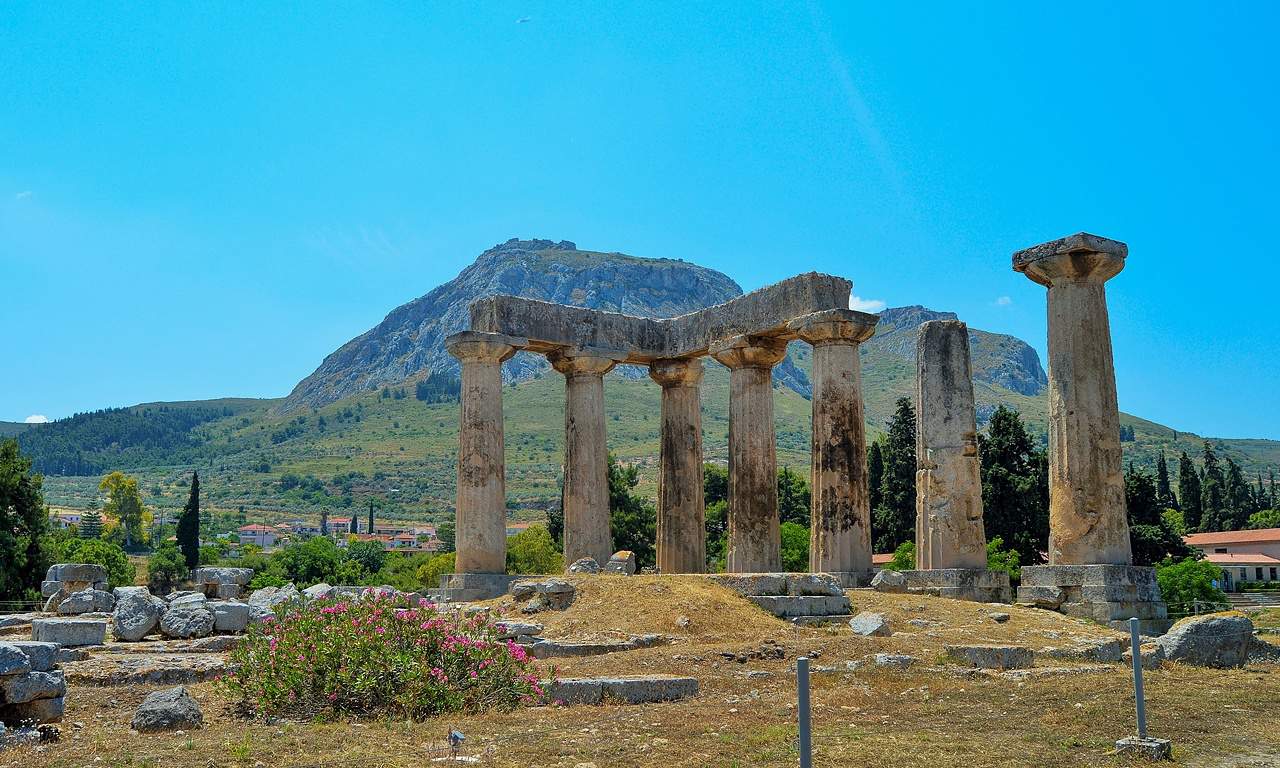 Nafplio: One of Greece’s Most Romantic and Prettiest Towns 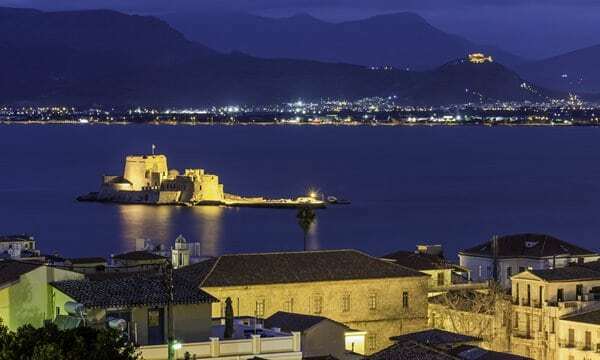 At the northern end of the Argolic Gulf is the seaside port of Nafplio. A popular weekend retreat for Athenians, this picturesque town is a must too for anyone visiting the Peloponnese. Neoclassical houses on the waterfront are overlooked by the Venetian hilltop fortress of Palamidi. And in the middle of the harbour is another Venetian landmark, Bourtzi Castle. Roman ruins and Ottoman architecture add to the town’s historical attractions, as do a range of museums. Nafplio claims to have first pharmacy in Greece. It was here that Ioannis Kapodistrias’ body was embalmed after his assassination on 9 October 1831. Kapodistrias is widely thought of as the founder of the modern Greek state and the architect of Greek independence.
Find things to see in Nafplio.

Things to do and see in Nafplio

Not only are there interesting activities within the town of Nafplio (walking tours and cooking classes), but a few of the major archaeological sites are nearby. There are a number of different guided tours to these sites from Nafplio. Find Historical and Interesting Activities in Nafplio on GetYourGuide.

Must See Archaeological Sites in the Peloponnese 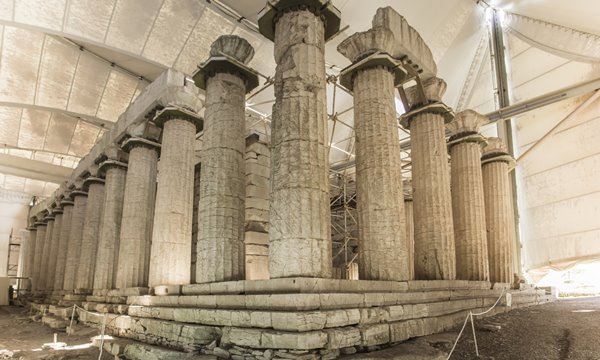 Well known for its 5th century Temple of Apollo Epicurius (‘Apollo the helper’), this relatively remote archaeological site of Bassae was the first site in Greece to be added to the UNESCO World Heritage list. Even though it is one of the better preserved ancient temples in Greece and certainly worth a visit, visitors to the site will find that the temple is now covered with a protective, large white tent. Inside the temple was decorated with a spectacular marble frieze, the so-called Bassae Frieze, which is on display in London at the British Museum.
Map: Greece 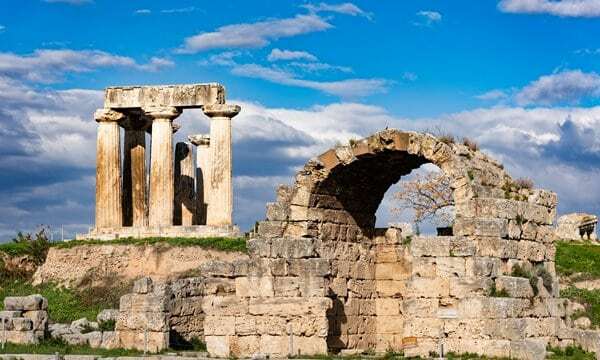 From the earliest times in antiquity to the medieval period, Corinth has been and important commercial centre. By the 4th century BC Corinth was one of the most important cities in ancient Greece. Although destroyed by the Romans in 146 BC, the city was rebuilt and became the provincial capital of Greece. Again it was destroyed, by earthquake in the 4th century AD. And again rebuilt, in the Byzantine period. Artefacts recovered from numerous excavations in the area are on display in the Archaeological Museum of Ancient Corinth.
Map: Greece 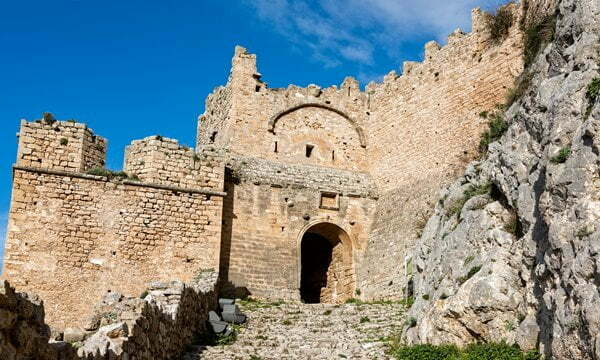 Acrocorinth, the acropolis above the ancient city of Corinth, has structures that are almost certainly prehistoric in age. But the earliest securely dated fortifications date to the 4th century BC. Much of the ruins we see on the Corinth acropolis were built during the medieval: Byzantine, Ottoman, Venetian and Early Modern eras. The ruins within the walls surrounding the hilltop are from the Ottoman settlement. Amongst other features from different time periods, visitors can see the remnants of a mosque, fountains and houses.
Map: Greece 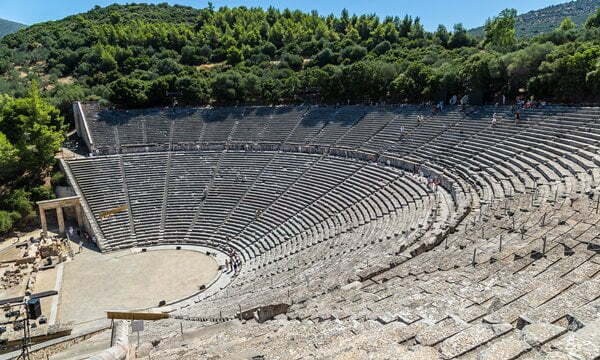 Sanctuary of Asklepios at Epidaurus

Epidaurus was an ancient city that developed around the shrine of Asklepios, the Greek god of medicine. From the 6th century BC onwards it became a vast city with many shrines and hospitals. Although an ancient healing sanctuary, today Epidaurus better known for its 4th century BC theatre. This particular theatre is considered to be one of the masterpieces of Greek architecture, given its exceptional acoustics that enable whispers on the stage to be heard throughout the 14,000 strong audience.
Map: Greece 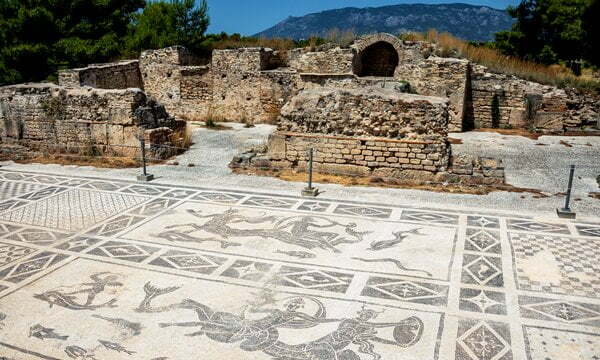 An ancient city known for its Temple of Poseidon and the Isthmian Games (one of the Panhellenic Games). Today visitors come to see the exceptionally well preserved and beautiful mosaic floors in the bath house, as well as the ruins of the Temple of Poseidon. Isthmia suffered the same fate as Corinth at the hands of the Romans in 146 BC. And it was not until 44 BC that Julius Caesar had the temple and stadium restored. The site was rediscovered and excavated in 1952 by the Swedish archaeologist Oscar Broneer.
Map: Greece

Day Tours From Athens to the Peloponnese

The following are just four examples of day tours from Athens to archaeological sites in the Peloponnese. There are many more. And these vary in duration (although most last for a full day), private or small group, and the combination of sites included in the itinerary. Find a Day Tour to the Peloponnese that suits you from GetYourGuide. 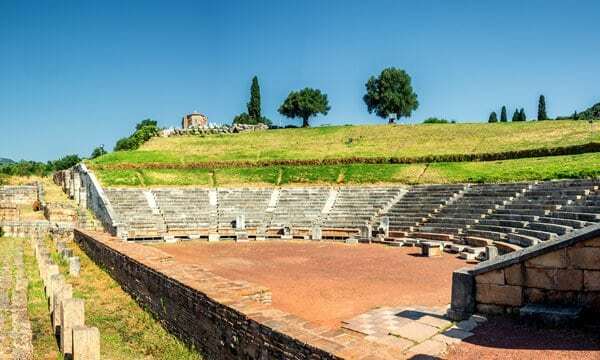 The substantial and well preserved archaeological site of Messene comprised the ruins of the large classical city-state of Messene that was refounded by Epaminondas in 369 BC following what was the first Theban invasion of the Peloponnese. There is a lot to see here, including a large stadium, a theatre and a basilica. The site is currently being excavated, and artefacts recovered can be seen in the on site museum. In 2011 the site was awarded the Europe Nostra Prize for cultural heritage from the European Commission.
Map: Greece
Buy Entry Tickets to the Archaeological Site of Messene via Tiqets. 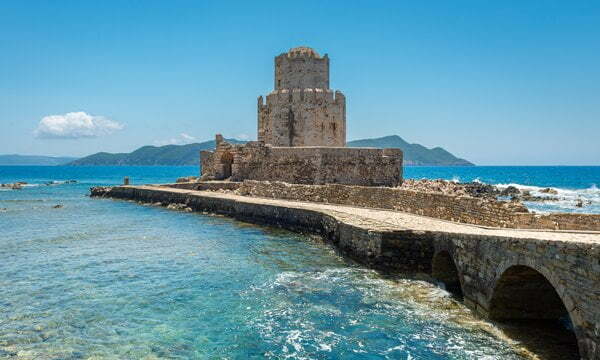 Methoni Castle occupies the entire peninsular that just out south of the town of Methonis. The Venetians built most of the castle and its fortifications, constructing these on earlier fortifications. The remains of these can be seen in places. A deep moat separates the castle from the mainland, which is and then reached by a stone bridge that has 14 arches. At the southern most tip of the peninsular is the Bourtzi Tower, a striking octagonal structure that is thought to have been built in the 16th century.
Map: Greece 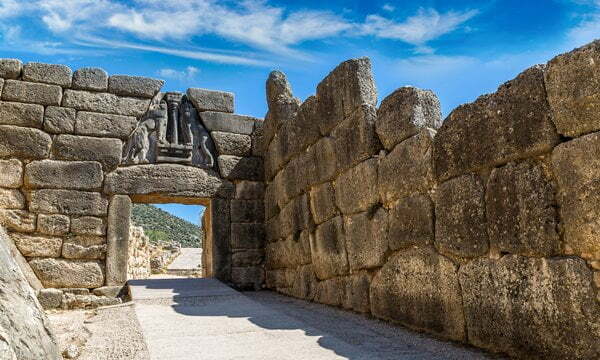 During the second millennium BC, Mycenae was a major centre and gives its name to the Mycenean period of Greek prehistory. The archaeological site is made up of a triangular, fortified acropolis surrounded by substantial walls of which the Lion Gate is a part. Below the citadel and beyond the fortifications are the funerary structures this prehistoric site is so well known for – such as the tholos tombs. The most impressive of these is the highly decorated ‘Treasure of Atreus’ – which is accessible to the public.
Map: Greece
Buy a Self-guided audio walking tour of Mycenae from GetYourGuide. 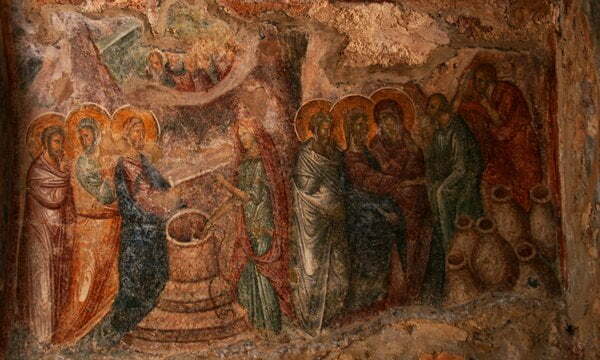 On the northern slopes of Mount Taygetos is the fortified town of Mystras. Founded in 1249 by the Franks, a few years later it became a important Byzantine settlement. The last emperor of Byzantium, Constantine XI Palaeologos, was crowned here in 1448. There is much to see here, including a number of Byzantine churches, two monasteries, the palaces of the Mystras Despots as well as many urban buildings. Not to be missed is the 13th century Frankish castle with its well-preserved walls and towers.
Map: Greece 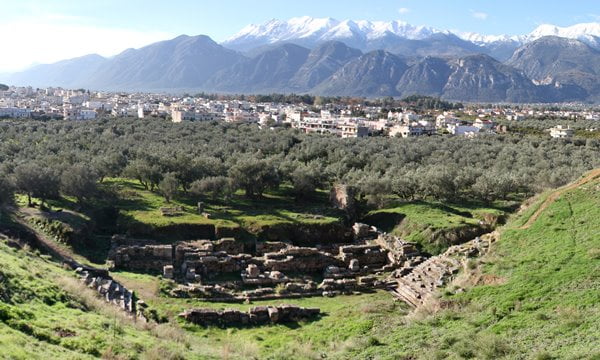 Our recommended partner GetYourGuide has a number of tours, from two days to five days long, that include the major archaeological sites in the Peloponnese on the itinerary. Find an Archaeological Tours of Greece to suit your interests.