Exploring the Past on Karpathos

According to legend, Karpathian pirates loved their island so much that they travelled to Mount Olympus to kidnap the gods. The unsuspecting captives were taken back to Karpathos and settled in a village high on a mountain, which the pirates named Olympos. The hilltop town definitely exists today. And much of the island’s history has indeed been defined by pirates; certainly as much as its character has been shaped by striking mountains. Whether the ancient gods lived here or not, Karpathos is one of the least commercial of the Greek islands. Mountain settlements, of which Olympos is only one, are so remote they have often been described as having been left in the past. Another myth, as some enterprising residents use AirBnB to advertise their accommodation for tourists. Karpathos is unequivocally an island of contrasts: beautiful beaches and magnificent mountains, a worldly present with a fascinating past.

With an island of striking contrasts, from rugged mountains and deep ravines to serene beaches and the bluest waters, comes opportunities for everyone. Karpathos is as much an island for nature lovers as it is for sports enthusiasts. The constant winds at the south eastern tip of the island make Afiartis perfect for kite and wind surfers. Whereas to the north is the designated Protected Area of Karpathos, Saria and Astakidonisia – recognised internationally for its biodiversity and historic landscapes. The island is a stopover site for birds migrating between Africa and Europe. Over 300 miles of hiking trails, 10 specifically designed for bird-watchers, enable visitors to combine interests in nature, culture and history.

Climb aboard Captain Manolis for a day trip to the island of Saria. Passing by secret coves en route to beautiful, secluded beaches to explore an amazing archaeological site. Today this peaceful spot seems as remote as you can get, but surrounding the natural harbour are the ruins of over 2,000 years of human habitation. Beneath the modern church of Agia Sophia are the ruins of a large early Christian Basilica – which in turn was built on the ruins of a 6th century BC settlement … Continue Reading >> 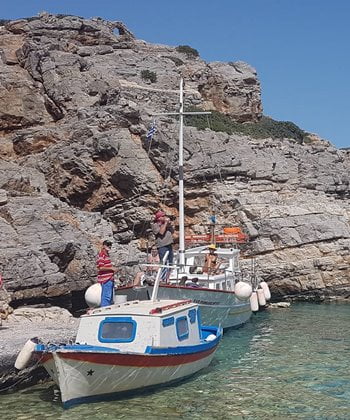 Hiking Along an Ancient Path to the Acropolis of Vrykounda

There is something special about following paths people have used for centuries if not millennia. Still today pilgrims follow an ancient path from Avlona to to a shrine dedicated to Saint John at the very tip of a promontory that has been settled for thousands for thousands of years. Hikers now follow the very same route to explore the archaeological site of Vrykounda. Here the ruins of a Hellenistic settlement with its monumental wall and rock cut tombs overlook what was a perfect natural harbour … Continue Reading >> 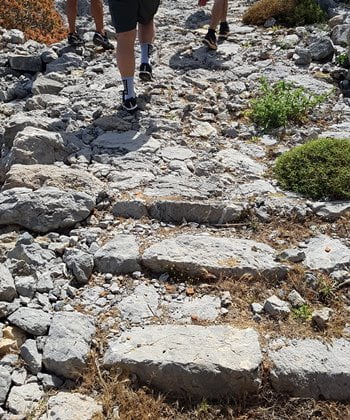 Archaeology and History of Karpathos 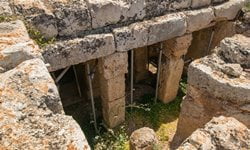 Between the town of Lefkos and the seaside resort of Kato Lefkos are the relatively well preserved ruins of a Roman cistern. Cut out of bedrock and covered over with large carved rock, seven underground galleries were used to collect underground water. A flight of steps into the structure enabled people to access these storage tanks for water supplies. The facility probably served the community living at Kato Lefkos. The site is well sign posted, and well worth a visit as there are few specifically Roman sites on the island … More Information & Photographs >> 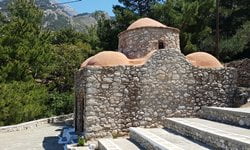 Just above a river bed at the base of mountains overlooking the town of Lefkos is a Byzantine church dedicated to Saint George. The stone-built church dates to the 12th century, perhaps even earlier. A number of well preserved frescoes can be seen in the church, including an image of St George. As with many Byzantine churches, the frescoes were whitewashed – possibly during the Ottoman period of the island’s history. 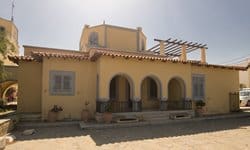 The museum is housed in the west wing of the early 20th century building that overlooks the port of Pigadia. An eclectic mix of architectural styles, the building was constructed to house the Italian administration. Three galleries cover the three main periods of the island’s past: prehistory, Classical and Byzantine. Although not extensive, the exhibits give a very good introduction to the early history of the island. One of the most striking displays is the collection of artefacts recovered from a 14th century BC chambered tomb. 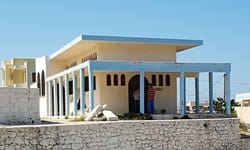 In a purpose-built museum a local priest gathered together a small but interesting collection of artefacts from the area around the town of Arkasa. A wall in the entrance displays a series of religious icons in various states of preservation, the oldest about two or three hundred years old. Alongside bleached bones of sea animals is a shell encrusted Roman amphorae. Capitals from the columns of early Christian churches are staked on on top of each other next to a collection of historic shoe-making tools.

Where to Eat, What to Eat in Karpathos 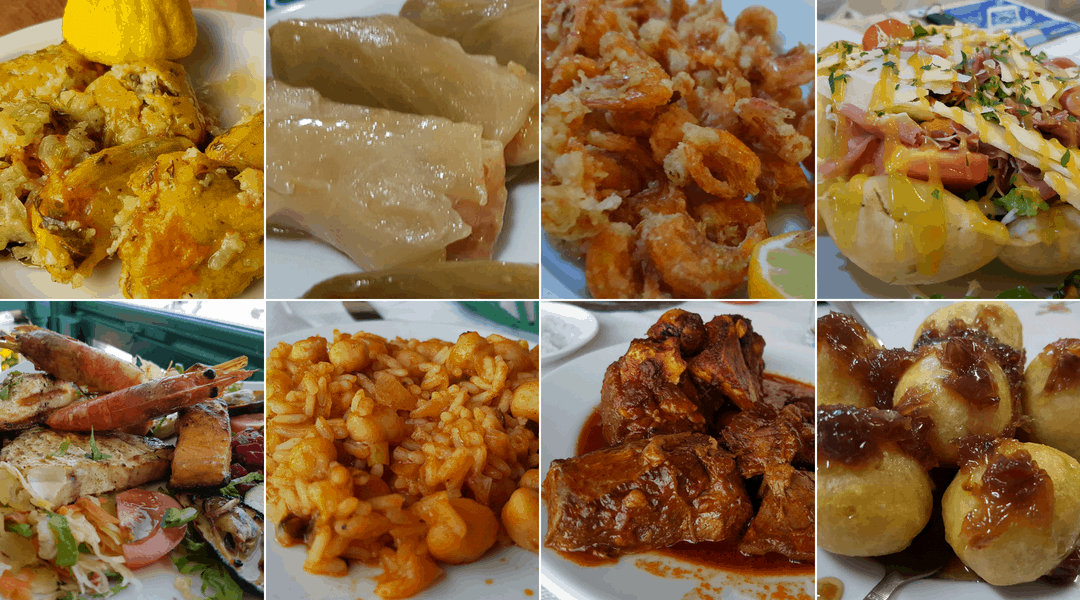 Something from each, top row from the left: the first of many firsts for me – stuffed courgette flowers at Ellinikon Restaurant; I have had stuffed vine leaves in Greece many times but I greatly enjoyed the stuffed cabbage leaves at Orea Karpathos; the deep-fried shrimp were so good – as was this unusual ham salad on a crusty pastry base at Maxim Restaurant.
From left on the bottom row: the seafood platter at La Mirage was even better than the view from this restaurant; I would never have thought to put chick peas and rice together, a great combination with the goat at Taverna Olympos. I was not able to escape the Taverna Olympos without trying their Loukoumades, served hot with a sweet rose petal jam.

Without hesitation, my favourite gastronomical discovery in Karpathos was macarounes. A light pasta served with cheese and fried onions. I had this dish at least three times while on the island – and I even got a chance to see Marina make fresh macarounes at her restaurant in Olympos (above left), Taverna Olympos. This pasta is quite simple to make, and is much like the pasta I learned to make in Ginosa (Puglia, Italy). The pasta dough is rolled with the hand until it is a long thing strand about the thickness of a standard-sized pen. This is cut up into small lengths, each a bit more than an inch long. Three fingers then drag the pasta across the through the dough.

Where to Stay in Karpathos

Karpathos is a big enough island to have the usual range of hotels; from budget to 5*, as well as B&Bs and AirBnBs. Out of season the choice is a bit limited, but from May through to September most hotels are open for the summer. Arriving early, I was so limited and made the wrong choice. Just avoid any establishment that alludes to the rising sun. It offers nothing but a false dawn. I found the Alimounda Mare Hotel too late, but wish I had stayed there my entire time. Right on the edge of a wonderful beach, and within walking distance of an Early Christian Basilica. That bed! Heaven really is a place in Karpathos. 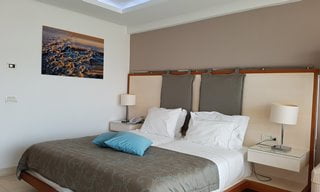 Karpathos has an international airport, which receives charter flights from a number of destinations in Europe. There are daily, scheduled flights from Athens that take about an hour.

The island is a must for any archaeological island hopping trip through the South Aegean, you can book your tickets with Ferries in Greece.