Guide to The Acropolis in Athens

In 480 BC the Persians attacked Athens and destroyed the various buildings on the acropolis, including an unfinished Parthenon. Shortly after, at the navel Battle of Salamis, the Greeks led by the Athenian Themistocles defeated the Persians. Athens then took the lead in the alliance of Aegean City States, known as the Delian League. During the period that followed, a time that saw culture, philosophy and the arts flourish, a group of artists under the sculptor Pheidias transformed the ruins of the acropolis into what would become one of the world’s most important monuments from ancient times. 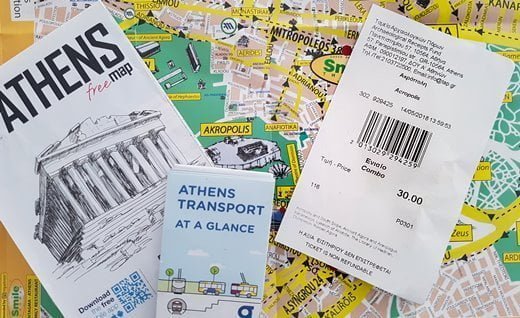 Buying Tickets for the Acropolis

Everything you need to know about buying tickets for the Acropolis, including what the Official Website does not tell you. Single entry tickets for the Acropolis can be booked online, in advance or you can buy a combined ticket for the major archaeological sites in the centre of Athens. For these step-by-step instructions are provided, along with information on how to buy-skip-the-line tickets … Continue >>

Virtual Tour of the Acropolis

Not able to get to the Acropolis yourself, why not explore this extraordinary archaeological site with a virtual tour? We have put together a collection of digital resources, including interactive maps, 3D reconstructions, an audio tour, YouTube videos, to enable you to build your own virtual experience wherever you are >> 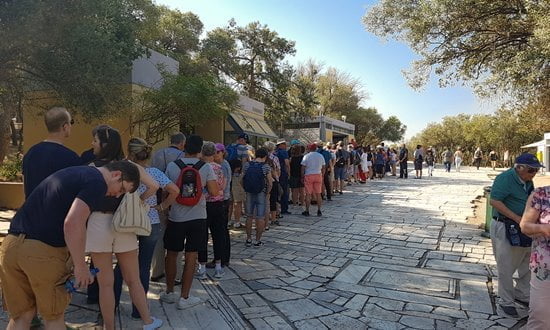 Walking Tours of the Acropolis

Whether you are looking for a guided tour of the Acropolis or just want to be able to skip the queues, there are many options to choose from. Well over 60 in fact. There are small group and private guided tours, walking tours in the morning or the late afternoon, some that include the Acropolis Museum. We have selected ten that we are happy to recommend, including an audio guide with skip-the-line tickets …Continue >>

The word Acropolis is made up of two words: ákron, which means highest or topmost point and polis that means city. So Acropolis is ‘high city’ or even ‘city in the air’.

2. There is more than one acropolis

The term acropolis is used to describe a settlement or citadel built on a hill that usually has very steep sides and was often chosen for defense. In ancient times acropoleis, the plural of acropolis, became the centre of cities and still today dominate modern cities with ancient pasts. Given the significance of the acropolis in Athens it is referred to as simply ‘the Acropolis’.

3. The Acropolis has been settled for at least 7,000 years

The earliest artefacts found on the Acropolis by archaeologists date to the Middle Neolithic, a period between 7,800 and 7,300 years ago. 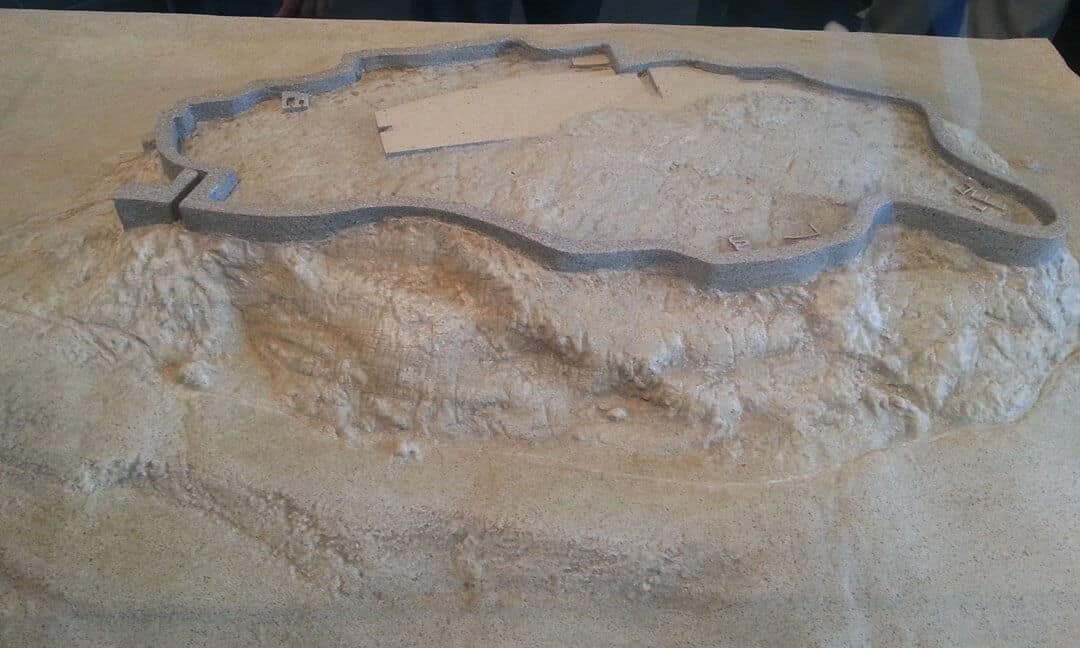 A model of the Acropolis around 1200 BC. Note the thick, ‘Cyclopean Walls’ – typical of Mycenean hill tops settlements of this time. The flattened surface marks the location of the palace. This and the other models photographed here can be seen in the Acropolis Museum.

4. Archaic Acropolis was destroyed by the Persians in 480 BC

When the Persians attacked the city of Athens they destroyed every structure on the Acropolis. The columns and other architectural remains of these buildings were then used by the Athenians when they built the north curtain wall. The remains of statuary and other votive offerings were buried in deep pits that helped to create the artificial platform on which the later buildings were constructed. These pits have been excavated by archaeologists, and the artefacts recovered, known as the ‘Persian Debris’, are on display in the Acropolis Museum. 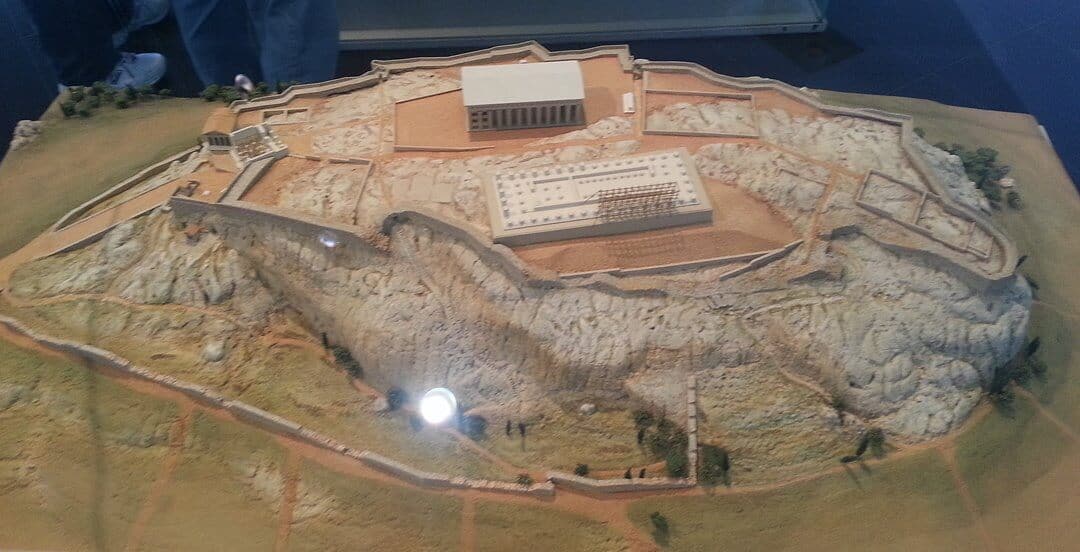 This is what the Acropolis would have looked like on the eve of the attack by the Persians in 480 BC. Note the incomplete Parthenon. The large building next to it was the original temple dedicated too Athena.

5. The Acropolis was built during the Golden Age of Athens

After the Athenians defeated the Persians the city of Athens flourished. There followed a period of stability that lasted throughout the fifth century BC, known as the Golden Age of Athens. Pericles, a prominent statesman and general in Athens at this time, initiated the reconstruction of the buildings on the Acropolis – a marble city for the glory of the gods. 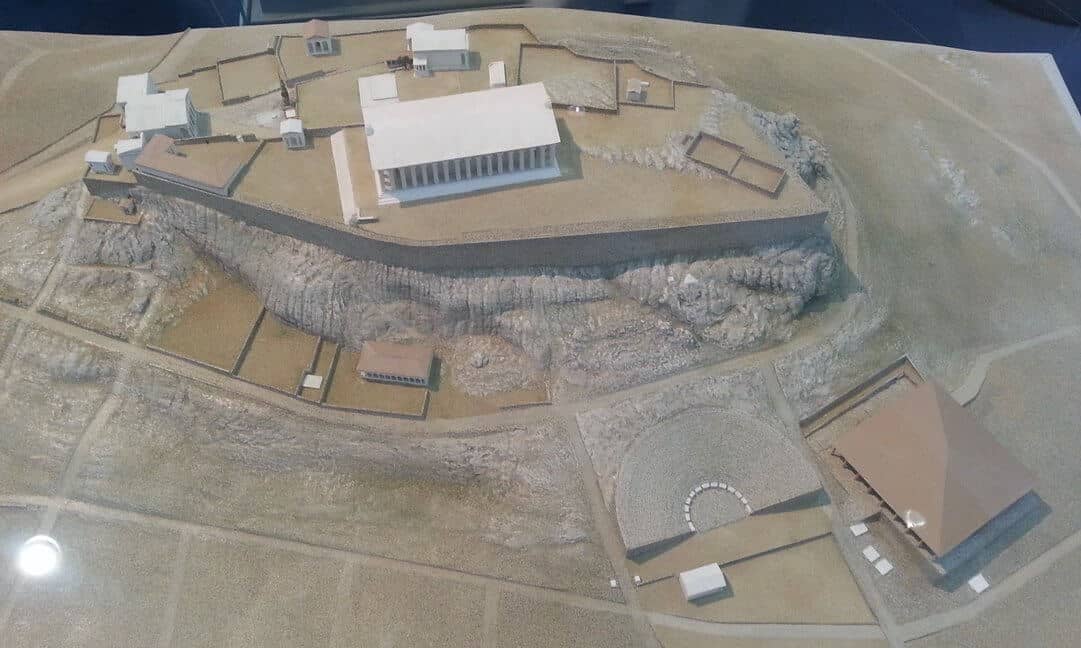 The Acropolis in the ‘Golden Age of Athens’ built from the ambitious plans of Pericles, the Athenian statesman, under the direction of Pheidias, one of the most well known of all ancient sculptors. Note the Parthenon the Erechtheion, the Propylaea and the small temple Athena Nike, among many other architectural features of which remains can still be seen today.

6. The Acropolis was a part of the forerunner to the modern Olympic Games

The Panathenaic Games is a forerunner of the Olympic Games, held in ancient Athens every four years from 566 BC right up to the 3rd century AD. These ancient games combined athletic competitions and religious festivals. These festivities included a procession of Athenians to the Acropolis to place new robes on the statue of Athena in the Parthenon.

Looking from the Panathenaic Stadium to the Acropolis: the first stadium on this site was built in 330 BC to host the Panathenaic Games. It has been renovated a number of times since. In 1896 the the opening and closing ceremonies of the first modern Olympics were held here, and again used as an Olympic venue in 2004. Besides being the finish line for the Athens Classic Marathon each year, it is also here that the Olympic flame is handed over the host nation.

7. There are no straight lines on the Parthenon

The Parthenon is widely regarded as the finest example of ancient Greek architecture. Factored into the various architectural features are ‘optical refinements’. For example, at the centre of the columns there is a very slight swelling. Observed up close, this gives the appearance of the columns bulging at the waist under the weight of the roof. But, it is thought to have been used to make the columns appear straight from a distance. 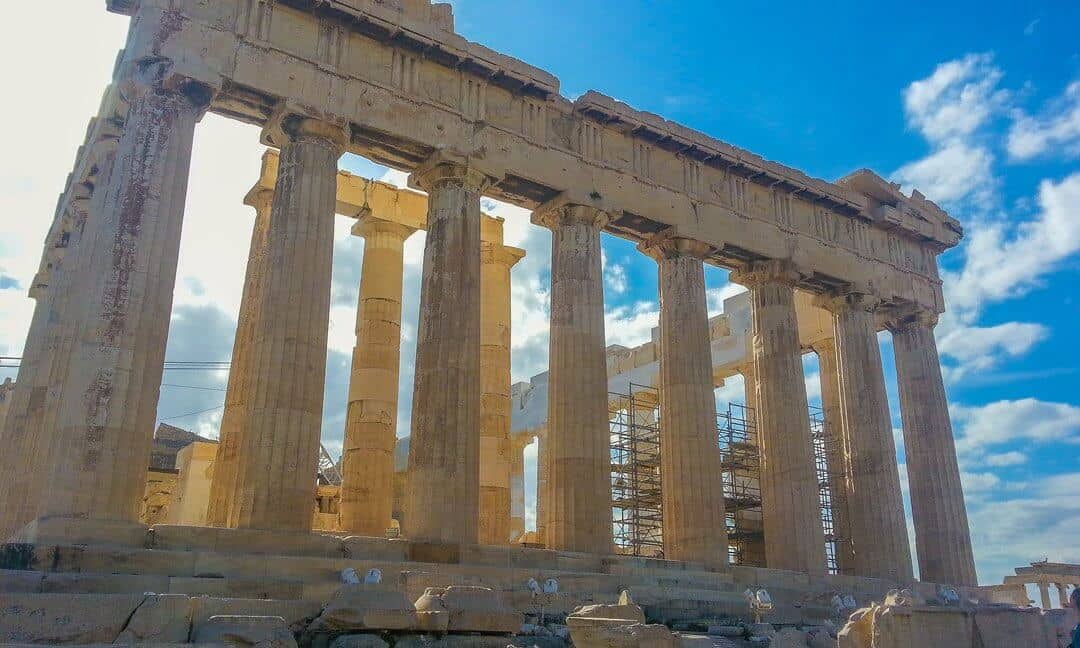 The western Entrance to the Parthenon – used to house the colossal statue of Athena, but probably not a temple.

8. The Erechtheion is an unique temple

As ancient Greek temples go, the Erechtheion has a complex structure. On either side of the main temple are two porches. The one on the south side, with its iconic caryatids holding up the roof, was constructed to hide a large beam supporting the southwest corner of the temple. The porch on the north side was added for balance. Because of these specific decorative gestures there is no other temple like the Erechtheion in ancient Greece. Whereas other temples on the Acropolis, such as the Parthenon, are not unique.

The Erechtheion has been replicated at the St Pancras Church in London. 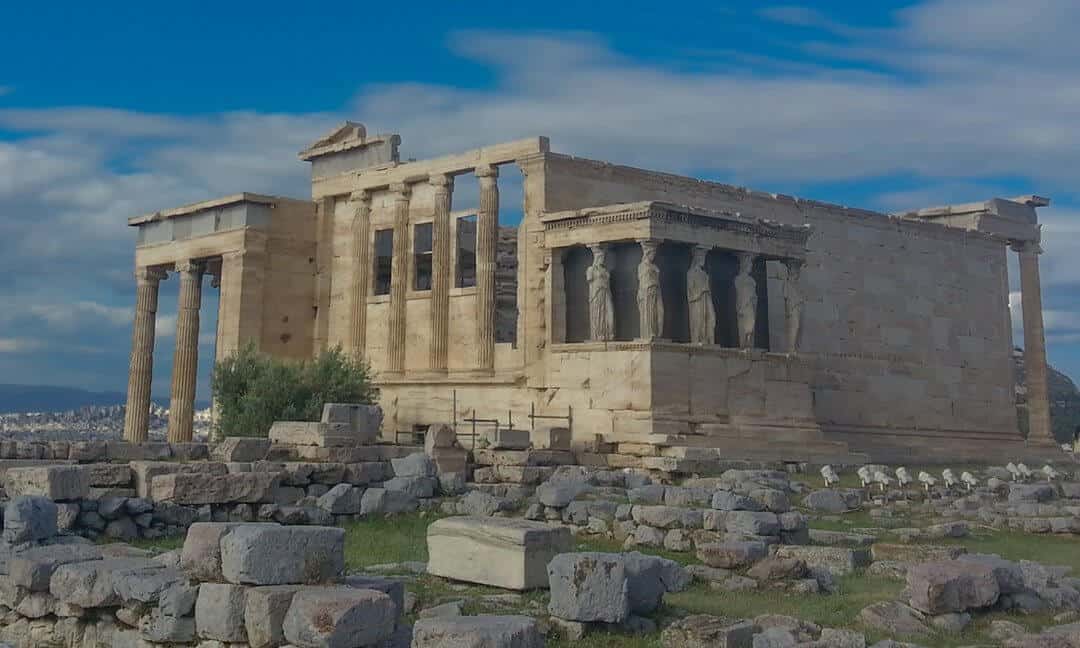 9. The Propylaea was never completed

In ancient times the Propylaea was the monumental gateway to the Acropolis precinct.And it is still used as an entrance to the archaeological site today. As impressive as this gateway is, it was never actually finished. Construction began in 437 BC but was abandoned by 432 BC due to the outbreak of the Peloponnesian War between Athens and Sparta. Not only were the eastern and northern wings not built, but many of the wall surfaces were not trimmed to their final shape, the blocks of marble looking as they did when they were lifted into place.

10. The Parthenon has also been a church and a mosque

The Acropolis during the Roman period of Athens, between the 2nd and 3rd centuries. Note the Odeon of Herodes Atticus, completed in 161 AD.

The Parthenon remained an active temple dedicated to Athena until 435 AD when the emperor Theodosius II decreed all pagan temples in the Byzantine Empire be shut. Towards the end of the 6th century the temple was modified (an apse was
raised and the main entrance moved to the western side) and became a church dedicated to the Virgin Mary. 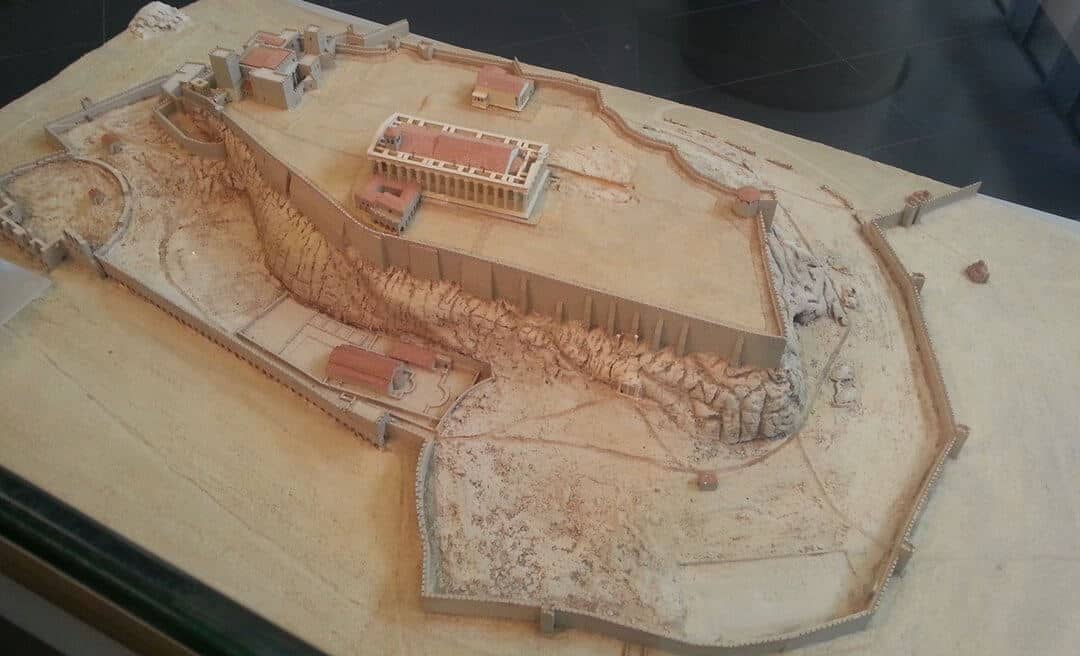 A vastly transformed Acropolis, in around 1500 AD. Note the ‘Church of Mary, Our Lady of Athens’ within the Parthenon.

Many centuries later, soon after the Ottomans invaded Athens in 1456, the church was converted into a mosque: the apse was changed into a mihrab and the tower became a minaret. Despite these changes, the basic structure of the Parthenon
remained intact. Subsequently, the temple suffered significant damage during the Great Turkish War in the 1600s. At the start of the 19th century, the ruins were robbed of some of their finest sculptures by Lord Elgin and other collectors.

Following Greek independence in 1832 the remains of the minaret were removed. And over the last forty or so years an interdisciplinary team have been involved in the painstaking restoration of the various features of the Acropolis. In 2013 this team was recognised with an Europa Nostra Award in recognition of their dedication to heritage conservation.