If you do not like the weather, wait ten minutes.
Destinations > Europe > Iceland

Exploring the Past in Iceland

With Europe’s largest glacier and the World’s most active volcanoes it is not surprising that Iceland is known as ‘the land of fire and ice.’ Today visitors are drawn to these primal elements, as well as the dramatic waterfalls in vast landscapes and northern lights that dance across winter skies. Besides the breathtaking natural features of Iceland, the archaeology and history is just as fascinating. People have been coming to this island for well over a thousand years, the earliest around 870 AD. Iceland is just as much a land of Vikings as it is of volcanoes and lights, glaciers and waterfalls. 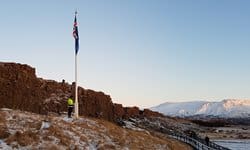 In 930 AD the Vikings established an open-air assembly or parliament, making this the world’s oldest Parliament. The assembly continued to meet here until 1798, before relocating to Reykjavik in 1844. Around the Althing archaeologists have found the remains of human habitation from the 10th to the 19th century. Not only is Þingvellir is a protected national site situated with in the Þingvellir National Park, part of which is a listed UNESCO World Heritage Site (2004), in recognition of its archaeoloogical and geological importance. [Website] 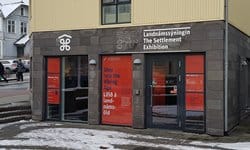 In 2001 workers digging in Reykjavik city centre came across the remains of a Viking longhouse dating to the 10th century. Later excavations revealed that the building was on top of an earlier structure dated to 871 ±2 AD – making this the oldest evidence of human habitation on the island. The remarkable find has been preserved in situ, and an extraordinary multimedia exhibition using state-of-the-art interactive technologies suitable for people of all ages reveals the world of Iceland’s earliest settlers. [Website]

Turf has been used as a building material in Europe since at least the Iron Age. Basically, timber is used to create the overall structure and turf is then used to create thick walls and to cover the roof. Northern Europeans in particular used turf to clad their ‘longhouses’, a tradition and architectural vernacular that was brought to Iceland in the 9th century AD. Traditionally, the longhouse was one large room that served all domestic functions. In time this changed, where rooms or annexes for specific functions would be added. In the early 1800s another change occurred, instead of one house with annexes smaller houses were built right up against each other. There are a number of traditional turf houses in Iceland, some of which have been restored and are now museums. One of the finest examples is in Reykjavik at the Árbær Open Air Museum. 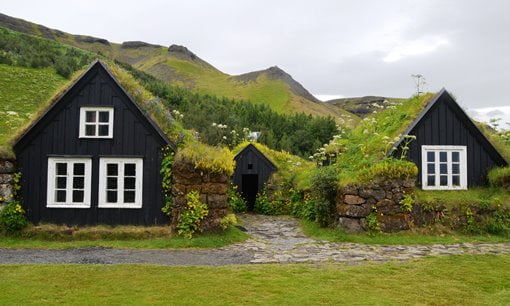 From a 13th century farmhouse, in its original position, to a re-constructed upper class town square with its 19th and 20th century two story buildings, this open air museum explores the early history of Reykjavik. Each house has been staged with period specific artefacts, allowing visitors to see what daily life was like in Iceland for farmers, fisherman and city dwellers. One of the buildings, in which the first worker’s guild was formed, houses a permanent exhibition that charts the history and development of consumption in Reykjavik. [Website] 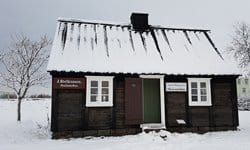 A permanent exhibition entitled ‘Points of View’ is an extraordinary exploration of the visual cultures of Iceland. Objects from six Icelandic museums and institutions are on display; juxtaposing contemporary artworks of various style, medium and date with museum artefacts and archival objects such as books and maps. A highlight of the museum is the display of the Icelandic Law Code, the Jónsbók – 14 illuminated manuscripts dating from the 13th century to the present day. [Website] 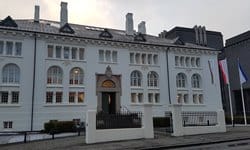 The National Museum of Iceland, Reykjavik

A permanent exhibition entitled ‘Points of View’ is an extraordinary exploration of the visual cultures of Iceland. Objects from six Icelandic museums and institutions are on display; juxtaposing contemporary artworks of various style, medium and date with museum artefacts and archival objects such as books and maps. A highlight of the museum is the display of the Icelandic Law Code, the Jónsbók – 14 illuminated manuscripts dating from the 13th century to the present day. [Website] 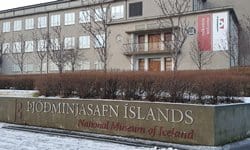 The focus of the museum is a permanent exhibition that features 2,000 objects and 1,000 photographs. ‘Making of a Nation’ charts the history of Iceland in chronological order from its earliest settlers to the 20th century. Some of the finest and most intriguing archaeological finds are made more accessible through ingenious multimedia displays. The shear diversity of objects, from Roman coins brought to the island by Vikings to the airport, will capture anyone’s attention. [Website] 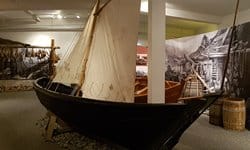