Aosta Valley is a small Alpine region in north-west Italy. Popular with hikers in the summer and skiers in the winter, and cultural travellers all year round. The highest mountain is Monte Bianco, or Mont Blanc. Valle d’Aosta means ‘Valley of Augustus’, after the Roman Emperor Augustus who seized the area for its strategic mountain passes from the local Celtic Salassi tribe in about 25 BC and established Augusta Prætoria Salassorum (modern-day Aosta). 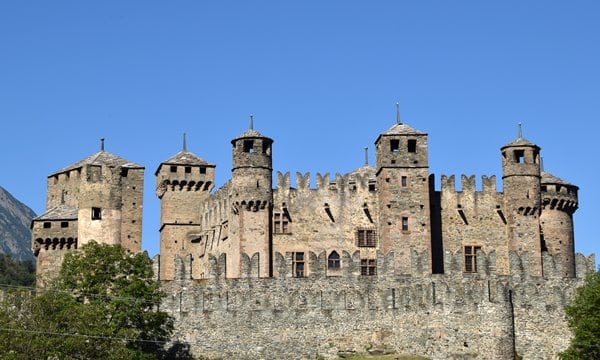 Today the Roman bridge is part of a popular hiking trail in a side valley of the Aosta Valley. In 3 BC this bridge was part of a six kilometre aqueduct that carried water to present-day Aosta for agricultural purposes in the then colony of Augusta Prætoria Salassorum. The top of the bridge is 66 metres above the valley floor, and when built there would have been a roofed control corridor. A Latin inscription on the bridge records that it was constructed by Caius Avillius Caimus from Padova using private funds. When the Romans defeated the Salassi tribe, it was the strategic mountain passes that they sought to control. In securing the mountainous routes they built a number of roads and bridges. The remains of some of these ancient roads are still visible in many places along the valley, and even the modern railway line follows these ancient routes. The single segmental arch bridge over the Lys River in Saint-Martin is one such Roman bridge. The bridge has a span of 35 metres, and a width of 4.5 metres. Once the centre of the Salassi Celtic tribe, Augusta Prætoria Salassorum was prized for its strategic position and became an important military post. In fact Aosta’s layout still resembles that of a Roman military camp. Many architectural features from the town’s Roman times have survived and some are quite well preserved. The city walls, for example, are all but complete, and six of the original 20 towers are still standing. The remains of the theatre, amphitheatre and forum can be visited, while a triumphal arch to Augustus still has pride of place. The first castle on this spot is thought to have been built towards the end of the 12th century. then it would have been a very simple structure of basic walls and a few towers. Over the years, and as it changed hands, the castle was added to, renovated and modernised until it looked like it does today – sometime towards the end of the 19th century. The stucco white church at the foot of the castle is the parish church of Saint-Pierre. The castle is now home to the Regional Museum of Natural Sciences. This Medieval castle is one of the most visited tourist attractions in the Aosta Valley. The castle has a typical defensive layout, which includes a pentagonal keep with towers at each corner. The keep is surrounded by a double wall complete with battlements, watchtowers and walkways. Built on top of a small hill and contrary to first impressions, the castle did not have a military or defensive purpose. Rather, it was a prestigious family residence. What visitors see today dates to the early 15th century. 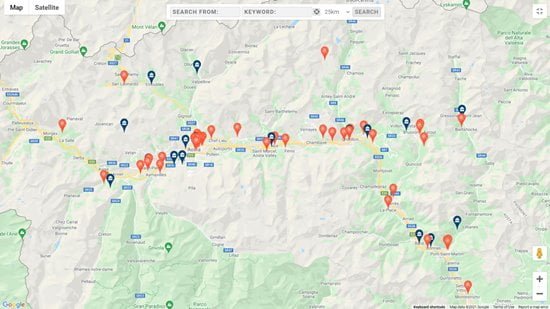 Use our interactive map to find archaeology and history sites and museums, landmarks and memorials and other historical points of interest around the Aosta Valley region of Italy. The map allows you to search for places of historical interest in different ways; by region or those that are near you within a chosen radius, or by keyword according to your interests. Although the map displays best on desktops and laptops, it can also be used on mobile devices – particularly to find sites and museums near your present location. Go to the Interactive Map of Aosta Valley find sites and museums you want to visit.