Lazio was not only the heartland of the Romans from their beginnings, the area was also inhabited by the Etruscans. Whether you are interested in a day trip or two from Rome or looking to spend a few days in picturesque and historic Italian countryside, Lazio will not disappoint. Tivoli is perhaps one of the most popular destinations for day trips from Rome, the location of Hadrian’s Villa and the Renaissance Villa d’Este. Closer to Rome is the Roman port of Ostia. The region is well known for the many historic hilltop towns. The provinces in Lazio are: Frosinone, Latina, Rieti, Rome and Viterboro. 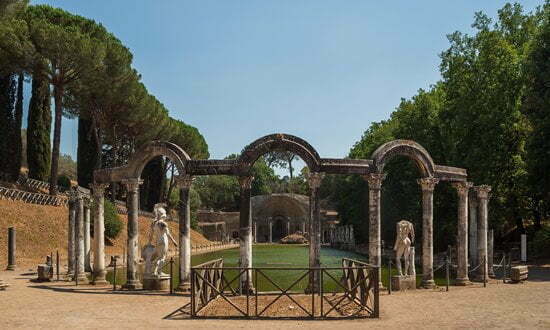 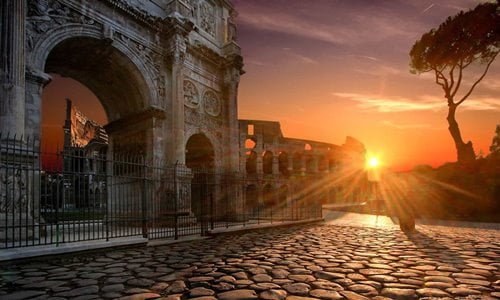 When it comes to archaeology in Italy, there really is no place like Rome, the Eternal City. If you planning your first trip to Rome and looking to ease yourself into the best and most popular sights there, have a look at our suggested top ten sites to visit. Once you have visited these, there is still so much more to see. Whether you are interested in Roman sites in the city, or more recent periods, move on and explore the history of the city further, see our Rome Travel Guide. There is a lot of useful information for what to see and how to get tickets. As well as tips one the best walking tours of Rome, the best day-trips from Rome and much more. Built for the Roman Emperor Hadrian at the beginning of the second century AD, Villa Adriana in Tivoli is said by many to be the most remarkable of all the country retreats built during the Roman era. The architecture is indicative of how well travelled Hadrian was, bringing together architectural features and sculptural elements from across the Mediterranean world. As the Emperor’s villa this was no ordinary country retreat, rather it was a small city built to accommodate the rulers staff, courtiers, guards and slaves … read more. [/caption] Also known as the Necropolis of Banditaccia, this ancient Etruscan Necropolis is a listed UNESCO World heritage site near the town of Cerveteri. There are thousands of graves in this the largest ancient necropolis in the Mediterranean area, and of different types from relative simple tumuli to complex and detailed tombs carved in rock. The tombs appear to have been arranged with a city-like plan in mind – the necropolis has streets, squares and different neighbourhoods. The funerary architecture at Banditaccia provides the only clues archaeologists have to Etruscan residential architecture. [Website] Photo © Johnbod/Wikimedia One of two Etruscan cemeteries designated a UNESCO World Heritage site, the Necropolis at Tarquinia has over 6,000 graves. These include rock-cut tombs as well as stone urn fields. This ancient necropolis is well known for its many painted tombs; over 200 tombs were painted with complex and detailed frescoes. These paintings depict various scenes of Etruscan life and death, as well as aspects of their religious beliefs. In one of the tombs, the Tomb of the Whipping, the frescoes portray unique erotic scenes. The earliest of these painted Etruscan tombs is thought to date to the 7th century BC. [Website] Photo © louis-garden/Wikimedia On the edge of the city of Rome in the suburb Ostia is the archaeological site of what was once the harbour city of the ancient Roman capital. In antiquity the harbour was situated at the mouth of the River Tiber, but now as a result of floods and silting up of the river mouth since Medieval times the coastline has moved and the remains of this well preserved city are 3 km inland. As ancient cities go this one appears to have it all. And as archaeological sites go Ostia Antica is well known for its remarkable preservation. Being close to Rome, and easily accessible by metro, it is well worth a visit … read more.

Popular Tours and Activities in Lazio Opened in 1967, the museum is housed in the 17th century Ruspoli Castle, which overlooks the town of Cerveteri. On display, set out in chronological order, are the artefacts found in archaeological sites in the area, ranging from the 9th century BC to the time of the Romans. Of particular importance are the many funerary objects such as sarcophagi and memorial stones recovered from the Etruscan cemeteries near the town, including the Necropolis of Banditaccia. The museum also has an impressive collection of local and imported ceramics, excavated from urban and domestic areas of nearby archaeological sites. [Website] Photo © Johnbod/Wikimedia Once the home of a Cardinal, then a papal residence and then a hotel, the Palazzo Vitelleschi has housed the collections of the Museo Archeologico Nazionale Tarquiniense since 1924. The primary focus of the exhibitions here are the Etruscans, with displays based on artefacts recovered from the Necropolis of Monterozzi, just to the east of the town of Tarquinia. Objects on display range from sarcophagi and other votive offerings, local and foreign ceramic vessels and restored paintings from Etruscan tombs.