Liguria is a narrow, arc of coast land that runs from France in the west to Tuscany in the east. Bordered by the Alps and Apennine mountains to the north and 350 km of coastline to the south. The area has a deep maritime heritage; Genoa, the capital, is better known as the home of Christopher Columbus. Dramatic seaside towns, including the five that make up the picturesque Cinque Terre, and local cuisine, pesto sauce originates here, have been attracting visitors for a long time. The four provinces that make up the region are Genoa, Imperia, La Spezia and Savona. 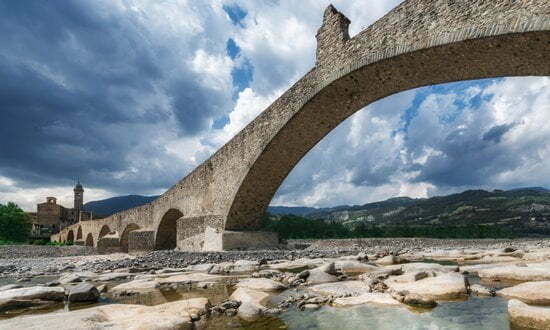 At the foot of a limestone cliff that reaches to a height of 100 metres is a series of caves that have been used by prehistoric peoples throughout the Palaeolithic. Not all excavations of the caves have been thorough, and much of the deposits have been destroyed. But, there is evidence of human occupation in the lower Palaeolithic, as well as burials from the upper Palaeolithic, as well as slight remains of cave art. A visit to the Balzi Rossi museum includes a guided tour of the caves and the Stone Age burials. [Website] The modern-day town of Chiavari developed out of what was once a minor Roman camp on the Via Aurelia. There is, however, considerable archaeological evidence for human occupation of the area (a fertile river plain) going back to the Palaeolithic. Artefacts found during archaeological excavations in the area, from the Stone Age to the Iron Age, and the Romanisation of the region are on display in the archaeology museum in Chiavari – in what was one the stables for the Palazzo Rocca. [Website] Once the centre of the Ingauni Celtic tribe, a tribe that supported the Carthaginians in the Punic Wars, Albingaunum soon fell under Roman control and given full citizenship in 45 BC by Julius Caesar. With the building of the Via Julia Augusta in 13 BC, the town was linked to France and Spain and began to prosper. Visitors to the town can walk on the original flagstones of the Roman road, and see the remains of the amphitheatre and a number of mortuary monuments along the way. To the east of the town of Ventimiglia is the Archaeological Area of the Roman City of Albintimilium. Besides the remains of a well preserved theatre, a number of other Roman buildings have been exposed and made accessible to the public. These include baths, tombs, town-houses and the city walls. A visitors centre provides a background to the Roman settlement as well as displays on the pre-Roman history of the area. Admission to the archaeological area is free of charge.