After Sicily, Piedmont (Piemonte in Italian) is Italy’s second largest region, mostly mountainous and surrounded on three sides by the Alps. On the northern slopes of Monviso, the highest point in the Cottian Alps, the river Po rises, and then flows east across northern Italy and into the Adriatic sea near Venice. The fertile lowland plains of Piedmont provide the region with a substantial agricultural economy. The region shares international borders with France and Switzerland. The Provinces in Piedmont are: Alessandria, Asti, Biella, Cuneo, Novara, Turin, Verbano-Cusio-Ossola and Vercelli. 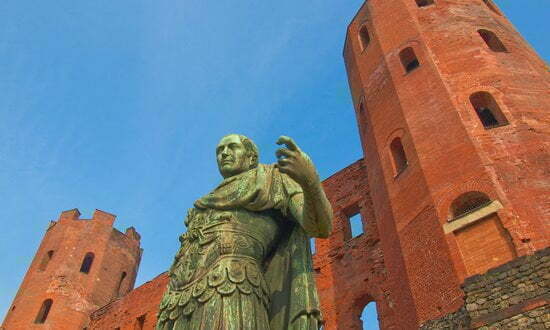 The modern town of Alba was built on top of the Roma town of Alba Pompeia. And the polygonal shape of the town can still be seen in the layout of the streets today. Remains of some of the gates from the Roman fortifications can still be seen. The 12th century, Romanesque style Alba Cathedral of San Lorenzo was built on the remains of Roman buildings. The local municipal museum has a modest but still interesting collection of the Roman artefacts discovered during various excavations in and around the town.

The town of Pollentia was founded by the Romans in the 2nd century AD, and was later the site of a battle between the Roman Army, the Visigoths and the Vandals. There are few physical remains surviving, but the shape and size of the amphitheatre is clearly seen in the ring of houses, known of as the ‘Borgo del Colosseo’. Founded around 600 BC as the capital of the Ligurian Iron Age tribe, Vercelum later developed to become an important Roman town. Only parts of the Roman amphitheatre and hippodrome have survived, and they can be visited. The Museo Camillo Leone has prehistoric and Roman galleries that display local artefacts. There are also a number of beautifully decorated churches in Vercelli. The Romanesque Basilica di Sant’Andrea built 1219 said to be amongst the best-preserved Romanesque monuments in Italy. Jean-François Champollion, the French linguist who was the first to decipher Egyptian hieroglyphs, wrote “The road to Memphis and Thebes passes through Turin”. One of the reasons for this reputation is because the Egyptian Museum of Turin has the second largest collection of Egyptian antiquities in the world (after the museum in Cairo). The first object from Egypt arrived in 1630, after which there were many campaigns to Egypt. The museum has the oldest known example of the Egyptian Book of the Dead. [Website] Housed in the 15th century Gothic style Palazzo, this local archaeology museum has extensive displays of the history of the area from the Bronze and Iron Ages to the Medieval period and more recent history. Of particular note is a large collection of artefacts from the nearby Roman town of Pollentia. Besides the usual examples of marble sculpture, the displays include a fascinating variety of everyday objects. The museum also houses works by local artists, dating from the 17th to 20th century. [Website]