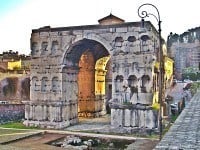 This massive, four-way arch built of marble is 16 metres high and 12 metres square. The north-west pier has a staircase that would have led to a series of rooms and chambers at the top. The enigmatic structure is built over an ancient drain that ran down the valley to the Tiber River. And is thought to have been a boundary marker rather than a triumphal arch. Also, dating the arch has not been simple. Remains of terracotta storage jars were found to have been used in the concrete vault, which are typical of jars used in the 4th century AD. 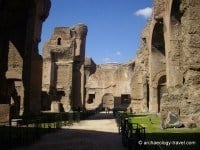 Built under Emperor Caracalla between 211 and 216 AD, these baths were the second of larger Imperial bath houses in Rome. The sheer size of the baths is still captivating – they covered an area of 100,000 metres square and accommodated about 10,000 people. More of a leisure centre than a series of baths, these were the second to have a public library. The baths continued to be used until the 6th century, and now a popular archaeological attraction in Rome, being the summer home of the Rome Opera Company … read more. 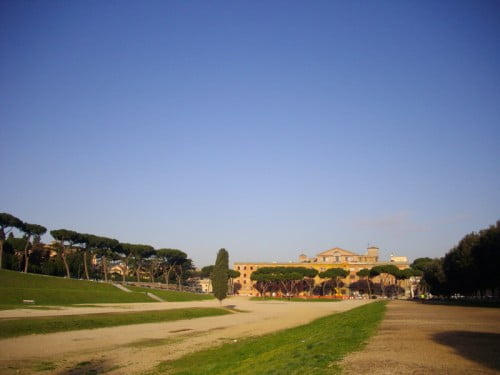 A popular public area in the heart of Rome, the site of the Circus Maximus is said to be the city’s oldest and largest public space. Evidence suggests it was founded sometime during the 6th century BC. By the end of the 1st century AD, it could accommodate an audience of over 250,000 people. Besides chariot races, other public spectacles including executions, gladiatorial contests and animal hunts were also staged here. The rounded, eastern end is currently being restored, and gives a good idea of the banks of seating. 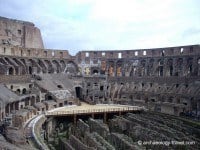 The Colosseum, also known as the Flavian Amphitheatre, is undoubtedly the iconic monument of Rome. At 48 m high, and 545 m in circumference, this was by far the largest amphitheatre in the Roman Empire, seating between 50 and 80 thousand people. While the basic style and design was used in cities throughout the Empire, the size and attention to detail was never matched anywhere else. Next to the Colosseum, and not to be missed is the Ludus Magnus, the main gladiators’ barracks and practice arena … read more. 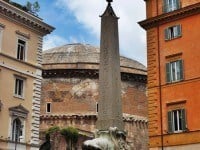 There are 13 erect, ancient Egyptian obelisks in Rome (yellow map markers) – more than anywhere else including Egypt. These obelisks are now a much loved feature of the piazzas in which they are now standing. One of the most famous is the Vatican Obelisk in St Peter’s Square. Pictured here is the Obelisk of Hophra on the Piazza della Minerva, just behind the Pantheon. Obelisks caught the eye of Augustus, who had them transported back to the heart of his Empire to add a divine sanction to his rule. 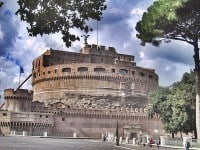 Castel Sant’Angelo has had a varied past. On the north bank of the Tiber River away from the ancient city of Rome, the castel is reached by crossing the St. Angelo Bridge. Much of what we see in this striking monument today was built between the 13th and 17th centuries, when the building was heavily fortified and housed the papal palace and later a prison. At first the castel was Hadrian’s Mausoleum, where the emperor’s ashes and those of his immediate family were placed a year after his death … read more. 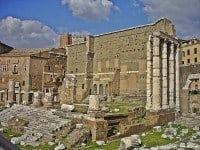 In 1932 many 16th century houses between the the Colosseum and the Piazza Veneziato were destroyed to make way for the Via Fori Imperiali. Then called the ‘street of the Empire’, the road was created for Fascist military parades. Excavations exposed five colonnaded precincts. The land either side of the road was set aside as a park until 1996, when archaeologists began uncovering what are now collectively known as the Imperial Forums. These areas are not open to the public but can be viewed from the street. 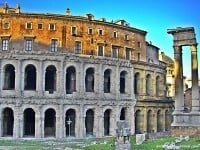 Within the ruins of the most important of Rome’s three theatres is a 16th century palazzo that is now subdivided into smaller apartments. The curving outer façade of the theatre is still obvious, as are other architectural features including the arcades. The theatre, which had a seating capacity of over 20,000 people, was started under Julius Caesar but finished for Augustus and inaugurated in either 13 or 11 BC. This theatre then became a model for further theatres built in Italy and the Western Roman Empire. 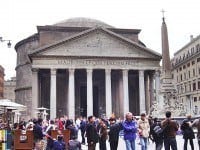 One of the most popular (entry free) attractions in Rome, the Pantheon was completed by Emperor Hadrian in 125 AD. The impressive dome ceiling of the rotunda was until 1958 the largest concrete span in the World. The reason for its remarkable preservation after nearly two thousand years is due to the fact that it was converted into a church in 608 AD. As impressive as the building is, its function is unknown – although most assume that it was a temple of one kind or another. 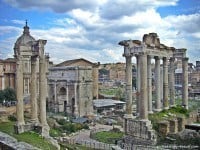 Even for the ancient Romans, the area known as the Roman Forum was considered a monument to the city’s remote past. As early as the 5th century BC, this area overlooked by the Capitoline and Palatine hills had become a political and symbolic centre of the Republican city. Over the centuries that followed and on into the Imperial period, numerous shrines, temples and fountains were added as show-pieces for political competition and the history on which Imperial Rome was based. 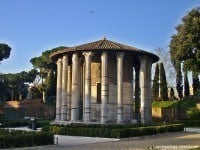 A Greek-style temple that was built towards the end of the second century BC and now in a small park near the Tiber River. Although the roof, the marble entablature and upper third of the cella wall are not original, the Corinthian columns and two windows beside the door are. The marble used for the construction of the temple comes from the quarry on Mount Pentelicus in Athens. By the 12th century the temple had been converted in to a church, but de-consecrated at the start of the 19th century, when the ground level surrounding the temple was lowered to reveal the podium. 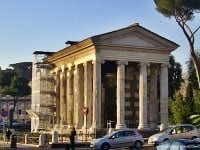 Thought to have been dedicated to the Roman harbour-god Portunus, this remarkably well preserved temple owes its survival to having been turned into a church around 872 AD. In the 1930s, buildings surrounding the temple were demolished and all external traces of the church were removed. The temple was built between 80 and 70 BC. A a more modest replacement for an earlier, late fourth century temple that had been constructed on a six metre high podium to avoid flooding waters of the Tiber River.

The Upper Via Sacra 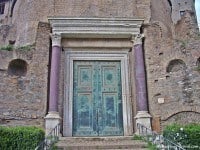 Leading from the Roman Forum, is a cluster of buildings and temples that date to Rome’s earliest days. Beyond these the Via Sacra, or Sacred Way, rises to the Arch of Titus. Before a fire in 64 AD, the street was lined with aristocratic houses. Entry to this area, from which the New Basilica of Maxentius/Constantine is also accessible, is included with entry to the Roman Forum. An exit-only gate is located alongside the Temple of Roma and Venus, beyond the Arch of Titus towards the Colosseum. Or you can proceed on to the Palatine Hill. 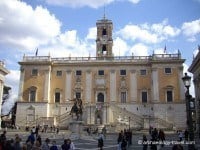 The Capitoline Museums have a long history, and are said to be the oldest public collection of archaeological artefacts in the World. They are certainly amongst the finest museums in Rome. The origins of the collections date back to 1471 when Pope Sixtus IV had 6 bronze Roman statues moved to the City Council on the Capitoline Hill. Now, many centuries later, there are over 1300 objects, most of which are from archaeological sites in Rome itself. The Capitoline Museums are in fact three different buildings, called palazzos, that surround the trapezoidal Piazza del Campidoglio … [Website] 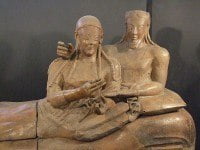 Since the beginning of the 20th century the former papal, late Renaissance residence of Villa Giulia has housed the Museo Nazionale Etrusco (National Etruscan Museum). The museum was founded in 1889 for the collection and study of pre-Roman archaeology of Latium, southern Etruria and Umbria. The most well known artefact in the collection is the sarcophagus lid from the Necropolises of Cerveteri, the so-called Sarcophagus of the Spouses (pictured here). In the garden is a complete construction of the Temple of Aletrium.

There are close to 800 activities in Rome, that range from airport transfers and bus tours, to guided walks of the main attractions in the city and day trips from Rome. These are all advertised by the Get Your Guide network of suppliers.

Disclaimer: Archaeology Travel receives a small commission if you purchase an activity through Get Your Guide. This does not mean you pay any extra, the commission is taken out of the advertised fee, which is more often than not already the best price available. Despite this, not because of this, we are confident in recommending these tours and activities to our readers.

Rome Reborn 2.2: A Tour of Ancient Rome in 320 CE from Bernard Frischer on Vimeo.

The above video clip shows a 3D digital model of the Eternal City at 360 AD, when the population in Rome had reached its peak at around one million people, and the first Christian churches were being constructed. You get to see a stunning bird’s-eye mixed with ground views of the ancient city that allows you take the ruins and remnants you see in Rome today and imagine and feel as if you were actually there.