Sicily is the largest island in the Mediterranean Sea, separated from mainland Italy by only five kilometres of water known as the Straits of Messina. Humans have been living here for at least 12,000 years. Over the millennia the island has been under the external control of various peoples – the Romans, Vandals and Ostrogoths, Byzantines and Arabs – along with periods of independence when the island was ruled by the Siceliotes, later as an autonomous Emirate and then the Kingdom of Sicily. Consequently, not only does the island have an extraordinary heritage (seven UNESCO World Heritage Sites), but also a rich and unique culture. 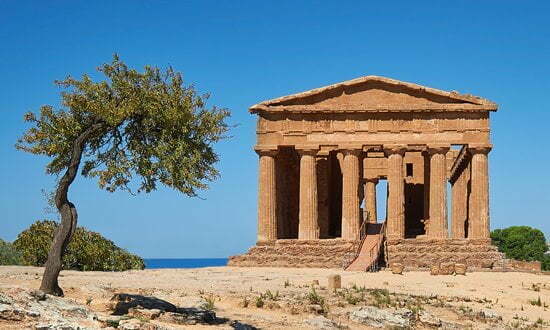 During the 8th century BC the Greeks began to colonise the eastern and southern coastline of Sicily. Here they established a number of important cities that were an integral part of ancient Greek civilisation. Archimedes, one of the leading scientists of Classical antiquity, was born in Syracuse. The spectacular ruins of a number of these cities are now UNESCO World Heritage sites. The Phoenicians and later the Carthaginians settled along the western and northern coastline of the island, establishing trading communities at Palermo and Marsala. The dividing line between the Greeks in the south east and the Carthaginians in the north west shifted constantly until the Romans intervened, defeating the Carthaginians in Sicily in the Second Punic War. There followed 600 years of Roman rule on the island.

Agrigento – Valley of the Temples 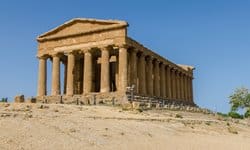 On a ridge near the town of Agrigento are the ruins of a 6th century BC Greek city. The most prominent remains are those of seven Doric temples, from which the archaeological site takes its name. Also uncovered are later Hellenistic and Roman remains, as well as an early Christian necropolis. This group of impressive temples attests to the political importance of the two in ancient times. What makes this site particularly interesting is that it is not overlain by structures of later people. 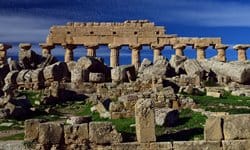 Selinunte was an ancient Greek city, established in the 7th century BC. As the most westerly of the colonies founded by the Greeks on Sicily, the city’s inhabitants were often in conflict with the Carthaginians, particularly during the Punic Wars. Despite suffering considerable damage as a result of these wars, many features of the city have survived. The main attraction in the Parco Archeologico di Selinente is a group of five Doric temples on the city’s seaside acropolis. [Official Website] 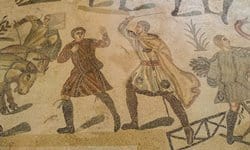 Villa Romana del Casale near the town of Piazza Amerina is one of the highlights of ancient Sicily. The villa was an opulent country estate of an obviously very wealthy, albeit unknown individual. The architecture of the villa is substantial, but it is the mosaics for which this site is well known. Here you will find the best collection of in situ mosaic floors anywhere in the Roman world. Not only is the preservation of the mosaics exceptional, the quality and richness is just as extraordinary.