Exploring the Past in Latvia

At the Āraiši Archaeological Park (Āraišu arheoloģiskais parks), on the shore of a lake in Amata Municipality, experimental archaeologists have reconstructed buildings from a range of different periods of Baltic history. These include dwellings based on both Stone Age and Bronze Age models and a reconstruction of the Āraiši Lake Fortress, a 9th to 10th century settlement revealed by excavation during the 1960s and 1970s. Not far from the reconstructions stand the ruins of a 14th century castle. 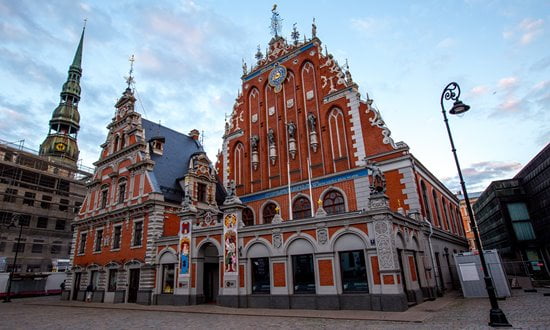 House of the Blackheads

One of the most eye-catching buildings on the old town square in Riga is the House of the Blackheads. Built in the early part of the 1300s for unmarried merchants, shipowners, and foreigners visiting Riga, when the city was a member of the Hanseatic League. The building, now a museum, was bombed by the Germans in 1941, the ruins demolished by the Russians in 1948, and then rebuilt at the end of the 1990s.

At the Kurzeme Fortress Museum (Kurzemes cietokšņa muzejs) in Zante, the tumultuous events of the two World Wars are brought to the fore. The outdoor displays feature a range of military hardware, including aircraft, armoured personnel carriers, and tanks, many formerly belonging to the Soviet Army. Various trenches and bunkers have also been restored to their wartime appearance. As well as its military collection, the museum also houses a collection of Stone Age artefacts.

The best-known and largest open-air museum in Latvia (Iepazīsti Latvijas Etnogrāfisko brīvdabas muzeju), this site is attractively positioned amid the forests surrounding Lake Jugla near Riga. First opened to the public in 1932, it now contains over 100 historic buildings salvaged from various parts of the country, spread over 87 hectares of land. These buildings include homesteads, churches, a bathhouse, a tavern, and a windmill. The museum hosts over 20 seasonal events and traditions each year.

Best Historical Tours and Activities in Latvia on GetYourGuide