The Celtic tribe living in what is today Luxembourg when Julius Caesar arrived was the Treveri. Unlike other Gallic tribes, they co-operated with the Romans more readily and were quick to adapt to a Roman way of life. In 22 BC Emperor Augustus officially created Belgica as a province of the Roman Empire, which included Belgium, the Netherlands and parts of northern France and western Germany. German Franks invaded Gallia Belgica in the 4th century, and by 406 AD the province had been abandoned by Rome. 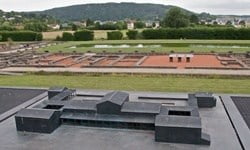 Southwest of the town of Echternach is a large, luxury Roman villa excavated in the mid 1970s. The first phase was built around 70 AD: a two story residence with 40 rooms on the ground floor. With marble walls, mosaics and underfloor heating in number of the rooms, courtyards and a swimming pool, this vast complex was the home of an important or wealthy individual. In about 275 AD the villa was destroyed by fire. Although it was rebuilt after this sacking by Barbarians, not to its original glory. It was again destroyed in the 5th century AD. Later monks used the stone in the building of the nearby Abbey of Echternach. [Website] 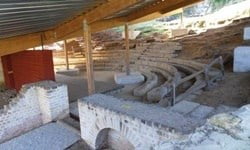 Beneath present-day Dalheim lies the ruins of a Roman vicus or country town – thought by some to be Ricciacum as noted on the Tabula Peutingeriana map. Remnants of this earlier town had been identified in the 17th century; and the site is still the focus of ongoing archaeological research. As a result much is known about this Roman town. Archaeologists have located the residential section, remains of the public baths and the town’s cemetery. In the 1980s the theatre was uncovered and restored, and made accessible to the public. The town was on the Via Agrippa, that branch of the Roman Road network from Lyon to the Rhineland. [Website] 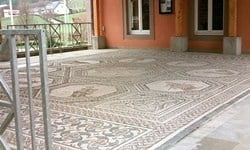 The small rural village of Vichen is well known for its extraordinary Gallo-Roman mosaic. The well preserved, polychrome mosaic was made around 240 AD for the reception room of a large Roman villa. Today the mosaic is on display in the National Museum of History and Art, in Luxembourg City. A life-size replica of the mosaic can be seen outside a municipal building in Vichten, next to the church. The church has a Romanesque bell tower, and some of the stones used in the building of the tower were originally cut and used in the villa that the mosaic floor once adorned. [Website]

National Museum of History and Art 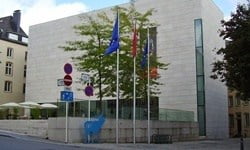 Located in the historic heart of Luxembourg City, the Musée National d’Histoire et d’Art Luxembourg showcases art and artefacts from all periods of the nation’s past. The archaeology gallery has an extensive display of the local Gallo-Roman period, with original objects and replicas from all over the country. Pride of place is the polychrome mosaic from the town of Vichten. Thought to have been designed in the workshops of Trier, it was laid about 240 AD in the rural villa belonging to an important and wealthy individual. The mosaic depicts Hesiod’s muses [Website]