Despite the government of Luxembourg issuing a proclamation of neutrality in 1939, on 10 May 1940 the German army entered Luxembourg. By midday the capital city was occupied. Many people, including the government and the monarchy fled to France. Luxembourg remained under occupation until August 1942 when it was annexed as part of Germany, and the people declared declared German citizens. As with other parts of occupied Europe, men were forcibly conscripted into the army, while Jews and other social undesirables were deported to death camps in the east. American forces liberated much of the country in September 1944, and by January 1945 following the Battle of the Bulge the Germans were finally expelled. A number of sites and memorials around the country mark the events of the Second World War, while many museums provide visitors with a view of what life was like at this time.

Deportation and Holocaust Sites and Memorials in Luxembourg 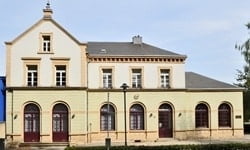 During World War II over 11,200 Jews were deported by the the German Wehrmacht from Luxembourg to the death camps in the east. And it was Hollerich railway station that was used for these deportations, from October 1941 to July 1944. People on the first train of October 1941 were sent to the Łódź ghetto. In 1996 a permanent memorial was set up at the station, including an informational exhibition in the old station house, and a memorial to the deported. [Website] 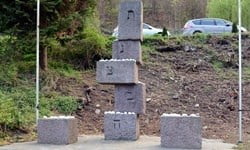 In 1900s German monks established a convent at Cinqfontaines. Soon after the occupation of Luxembourg by the German Wehrmacht, the convent was dissolved and used for the internment of Jews. Called the “Cinqfontaines Retirement Home for Jews”, children, women and men of all ages were brought here and forced to live in appalling conditions before being removed by rail to death camps in the east. From October 1941, 230 people were deported from Cinqfontaines. [Website] 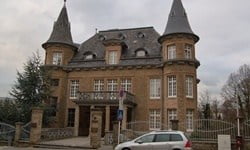 Villa Pauly is the city central mansion built for a surgeon, Dr Norbert Pauly, in 1923. From August 1940 to August 1944 the house was taken by the Nazis and used for the headquarters of the Gestapo, under the leadership in Luxembourg of Fritz Hartmann. The cellar was used for interrogations and torture of people. In 1989 the building became a protected monument, and is now a resource centre documenting the resistance movement in Luxembourg. It is not open to the public. 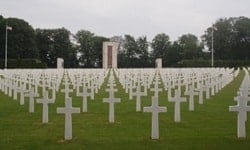 The American cemetery contains the remains of 5076 American soldiers who died fighting in the second World War. Most of those interred here fell during the Battle of the Bulge, which was fought nearby from the winter of 1944 to spring 1945. There are 22 instances in this cemetery where brothers were laid to rest side by side. Also buried here is General George S Patton, who died from injuries sustained in a car accident in December after the war ended. [Website] 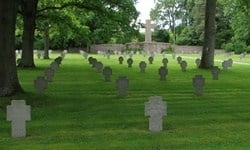 This cemetery, inaugurated 5 June 1955, is reserved for German servicemen killed during the Battle of the Bulge in winter 1944 and spring 1945. There are a total of 10,913 graves, of which 5,599 men were buried during the war. Following the war, the remains of German soldiers were brought here from over 150 cemeteries and mass graves around Luxembourg. The most recent being in 2007 when the remains of an unknown soldier were found in a forest near Wiltz. 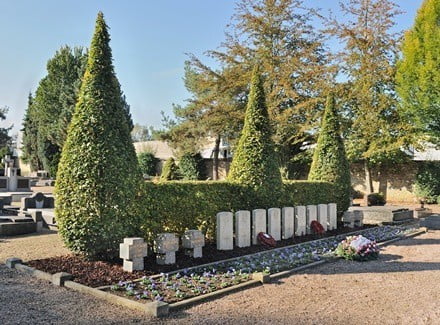 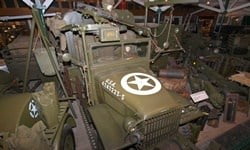 Founded in 1984 the Musée National d’Histoire Militaire tells the story of the history of the military of Luxembourg and its role in various campaigns. The main focus of the museum is the story of the Battle of the Bulge in World War II. In an area of over 3000 m2 is one of the best WWII collections, including military vehicles and equipment of all kinds and soldiers’ personal belongings. The focus is a diorama of the the night-time Sauer river crossing at Diekirch. [Website] 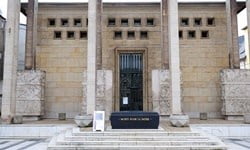 The Musée National de la Résistance was opened in July 1956 and awarded national museum status in 1984. With photographs, artefacts and commissioned artworks the museum details Nazi oppression of Luxembourgish people from the occupation in 1940 to the liberation of Luxembourg in 1945. Topics include resistance movements and the system of concentration camps. One gallery is reserved for temporary exhibitions on issues of human rights violations. [Website]

Museum of the Battle of the Bulge, Clervaux 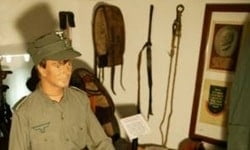 An extensive collection of photographs and documents, uniforms and weapons on display in the Musée de la Bataille des Ardennes not only recount the details of the ‘Battle of the Bulge’, or la Bataille des Ardennes, but also what life was like in Clervaux at this time. Opened in 1974 and greatly transformed in 2000, the museum is housed in Château de Clervaux, a 12th century castle that was itself destroyed by fire during the battle. [Website]

Museum of the Battle of the Bulge, Wiltz 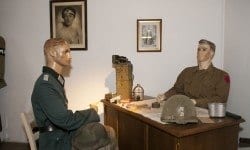 In 2014, after a year-long period of renovation, the Musée de la Bataille des Ardennes, 1944 – 1945 opened its doors once again to the public. The usual range of military artefacts and objects tell the story of the Battle of the Bulge, but from the perspective of the inhabitants of the city of Wiltz, and the soldiers who were besieged here. The museum is housed in le château de Wiltz, along with two other museums of local industries, tanning and brewery. [Website] 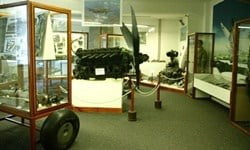 Opened in July 1995, the museum is dedicated to the memory of General George S Patton, who was in command of the Third US Army. On Christmas Day 1944 soldiers of this unit liberated the town of Ettelbruck from German occupation. Although the museum tells the story of World War II from occupation by the Germans to the liberation by the Americans, a focus of this museum is a series of exhibitions covering the battle in the skies over Luxembourg. [Website] 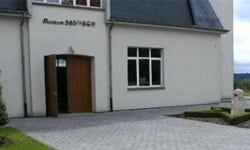 On 13 July 1944 two B-17 bombers of the 385th Bomb Group of the US Air Force collided over the town of Perlé. With a nearby monument, the museum is dedicated to the 18 airmen who lost their lives. The museum, housed in the rooms of an old school, has artefacts and parts of the B-17 bombers, and gives an insight into what life was like for air crew of the B-17s during the Second World War. Many of the objects and documents in the museum were donated by veterans.