As much a destination for lovers of archaeology & history as it is a mecca for sun seekers.
Europe > Spain > Gran Canaria

Exploring the Past in Gran Canaria

Gran Canaria, one of seven islands that make up the Canary Islands – an autonomous community of Spain, lies about 100 kilometres or 62 miles west of Morocco in the Atlantic Ocean. Given the archipelago’s position, it lies on a nautical crossroads of sorts between Mediterranean Europe and the Americas, Europe and the Cape and East Indies. Consequently the island has a fascinating past stretching back some 3,000 years at least, a history that has come to shape the island’s culture and cuisine … Continue Reading >>

Map of Archaeology and History Sites and Museums in Gran Canaria

With 360 days of sunshine and year round temperatures of 24°C it is perhaps understandable that Puerto de Mogán claims to have the world's best climate. Equally unsurprising is that this quaint historic fishing village has been attracting tourists, including Agatha Christie, in large numbers since the 19th century. And the town has another archaeology connection ... Continue Reading >> 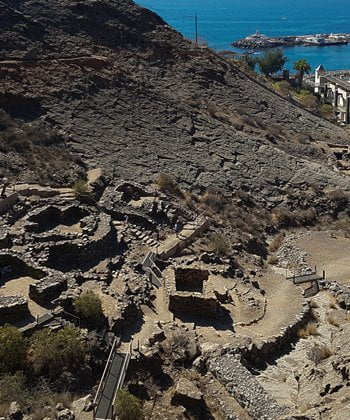 Cut into volcanic ash deposits Cueva Pintada, the painted cave, is just one feature of a village made up of over 50 houses. The settlement was inhabited from the 6th to the 16th century, the excavation of which tells a fascinating story of the first people of Gran Canaria and their encounter with Europeans towards the end of the 14th century ... Continue Reading >> 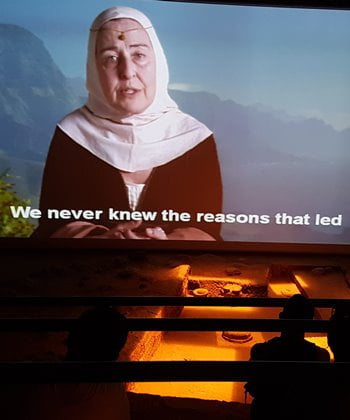 Like a Phoenix on Gran Canaria, Maipés rises from a lava flow

As archaeology sites go, the Maipés Parque Arqueológico is one of the most extraordinary I have ever visited. It may not be as striking as other iconic funerary sites, such as the Pyramids of Giza, but it is every bit as interesting. A thousand-year old necropolis of some 800 individual tombs built in and using the boulders of an ancient lava flow ... Continue Reading >> 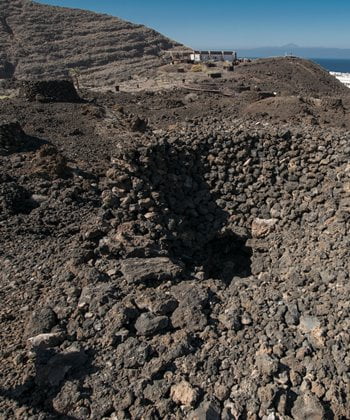 The village of Puerto de Mogán at sunset and full moon.

Exactly when, and how, the first inhabitants of Gran Canaria arrived is not yet clear. Archaeological evidence suggests that there were people living in the Canaries by at least 2,500 years ago. Comparative studies of archaeological artefacts together with more recent studies of DNA suggest that the closest living relatives of the earliest Canarians live in North Africa; leading some to suggest a common ancestry with North African Berbers. Two thousand years later Genoese, Majorcan and Castilian explorers ventured beyond the straits of Gibraltar, settling in the Canary Islands. Following the Canary War (1478 to 1483) the island become part of the Crown of Castile.

While there may be many unanswered questions about the earliest Canarians, the archaeology of Prehispanic Gran Canaria is one of the richest of the archipelago. These first peoples came with their own cereals, and had mastered ceramic technologies making vessels of all shapes and sizes, as well as exquisitely decorated figurines and other enigmatic objects. They lived in small villages, made up of either dry-stone walled houses or caves cut into deposits of softer volcanic ash. By the 14th century, based on archaeological evidence and accounts of European explorers and colonists it is estimated that there were some 30 villages scattered about the island, supporting a population of about 20,000 people. Some of these spectacular sites have been expertly developed recently to give visitors a deeper appreciation of what life was like on the island before the arrival of Europeans.

Beneath the streets of Gáldar are the remains of a village made up of some 50 houses and artificial caves, occupied from the 7th to the 16th century. Painted on the wall of one of these rock-cut caves are polychrome geometric patterns thought to have been made in the 12th century. Excavated by archaeologists in the 1980s, the remains of the houses have been preserved in situ around which an extraordinary interpretative centre has been constructed that allows visitors to see artefacts recovered, walk above the ancient village to the original 'painted cave, and understand the transition from Prehispanic times to Spanish rule. 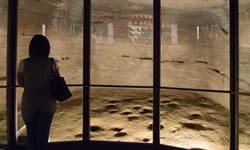 In a large cave with a precipitous view over a deep ravine, Prehispanic inhabitants created a remarkable system of granaries. There are over 200 individual silos, side by side and in several layers, that were dug out of the soft volcanic rock that forms the bedrock of the cave. In each was stored grain and various foodstuffs, as well as tools and other objects. In prehistory the cave was very difficult to get to. Today stairs and ramps allow visitors to get close to this remarkable site. As with many other sites on the island, excellent information panels provide all the geological and historical background to the site. 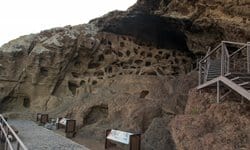 Using a 3,000 year old lava flow, now a 'stream' of black volcanic boulders, the Prehispanic Canarios created a vast necropolis. Rocks were gathered up to make individual cairns, each of which would have contained a body. There are over 800 individual tombs, one of which has been dated to between 700 and 800 AD. Looking across the boulder field today it is not always easy to make out the tombs. A raised path guides visitors around the site, and a number of simple techniques and information panels have been used to enables you to see the archaeology. 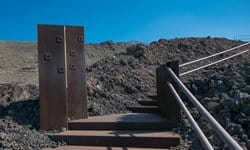 A boulder field created from a rock fall down the side of a valley was used by the Canarios as a cemetery. Bodies were placed in a cist in the ground, and a cairn built above ground over the cist. This ancient necropolis has over 900 individual tombs, the oldest of them dating to between 800 and 1100 AD. Burying the dead here continued until the 1800s. The so-called 'King's Tumulus' is lit up by the sun's rays at daybreak on equinox. A self-guided trail over the boulder field not only allows you to see the archaeology, but there are also wonderful views up and down the valley at points along the path. 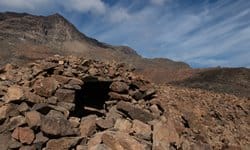 The fishing port of Puerto de Mogán has a fascinating history that stretches back some 2,000 years. Behind a large hotel and a street of private residences are the remains of a coastal settlement and cemetery, the earliest dates for which are around 300 AD. From the 15th to the 20th century later arrivals on the island built their own houses directly above the ruins of the Prehispanic buildings. A well set out and easy path with informative interpretative panels leads visitors today through this history of the town from recent banana plantations to the ancient settlement and burials. 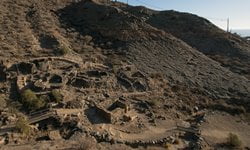 La Fortaleza is one of the most important Prehispanic sites in Gran Canaria. High on a dramatic rocky promontory are the ruins of a series of dry-stone walled buildings. Archaeological excavations at the site suggest it was more than just a place to live. And perhaps more significantly it was here that the Canarios took their last stand against the Castilian troops, finally surrendering on 29 April, 1493. A Visitors' Centre has recently opened to the public that makes use of the latest interpretative multimedia technologies to show the features of the site that are otherwise inaccessible to visitors. 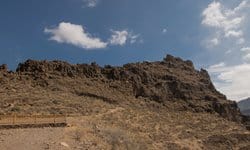 One of the most important religious buildings in the Canariy islands, the cathedral in Las Palmas (or the Holy Cathedral-Basilica of Canary) is the seat of the Roman Catholic Diocese of the Canaries. Building of the cathedral began in 1500 and finished in 1570, but in the 18th century the church was given a major refurbishment. The striking façade overlooks the Plaza Mayor of Santa Ana in the historic district of Vegueta, hence why the church is also called the Santa Ana Cathedral. Although largely Gothic in style, the church also has typical Moorish and Romanesque architectural features. 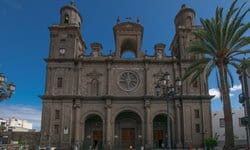 The understated Episcopal Palace is on the Plaza Mayor of Santa Ana opposite the cathedral in Las Palmas' historic quarter. The palace was built while Bishop Vela was in office between 1575 and 1581. The building suffered considerable damage in 1599 when the island was unsuccessfully attacked by the Dutch under Vice Admiral Van der Does during the Eighty Year's War between the Low Countries and the Spanish Empire. The most notable feature from the outside, overlooking the plaza is the colonial balcony with its latticework parapet. At the rear are orchards that would have once surrounded the entire building. 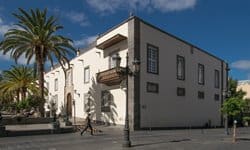 More than 20 museums are dotted about the island. Many of these institutions are internationally respected research centres in their own right. They range from formal museums covering various aspects of life on the island from prehistoric times to the present, to historic houses dedicated to illustrious individuals who once lived there.

Founded in 1879 as a multidisciplinary museum exhibiting all aspects of the island, El Museo Canario in the 1980s focused exclusively on the first inhabitants of Gran Canaria. A permanent exhibition of archaeological artefacts dating from the second half of the first millennium to the 15th century is spread through 11 galleries. Beautifully created displays cover all aspects of the Prehispanic Canarios culture and society, from the organisation of settlements, economic activities to funerary practices. An excellent place to start for anyone wanting to go on and exploring the archaeological sites. 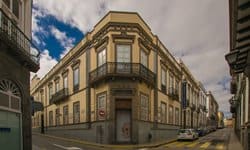 In the heart of Vegueta, the historic district of Las Palmas, is the ornate Casa de Colón - the house of Columbus. There is, however, not much evidence that Christopher Columbus stopped at Las Palmas, let alone at this house. At Columbus' time the building was the Governor's mansion and then about 150 years old. In the 1950s it was heavily renovated by a well known Canarian writer, Nestor Alamo. He specifically wanted to link Vegueta with Columbus. Today, the house is a wonderful museum that explores Columbus and his voyages, Gran Canaria and pre-Columbian America. 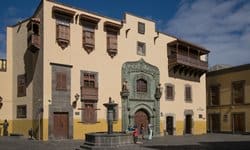