Archaeology and History Sites and Museums in Nevada

Nevada, the ‘Silver State’ as a result of the silver rush days of the mid 1800s, is a state of many contrasts. Visit prehistoric petroglyphs on Donner Pass – not far from Lake Tahoe, the largest alpine lake in North America. A landscape so different to the striking sandstone formations of the high desert. As desolate as much of the state appears, it is after all home to ‘the loneliest road in America’, people have been living here for millennia. Colonised by the Spanish in the late 18th century, Nevada was acquired by the United States in the Treaty of Guadalupe Hidalgo following the Mexican–American War. In 1864 Nevada became the 36th state in the union. 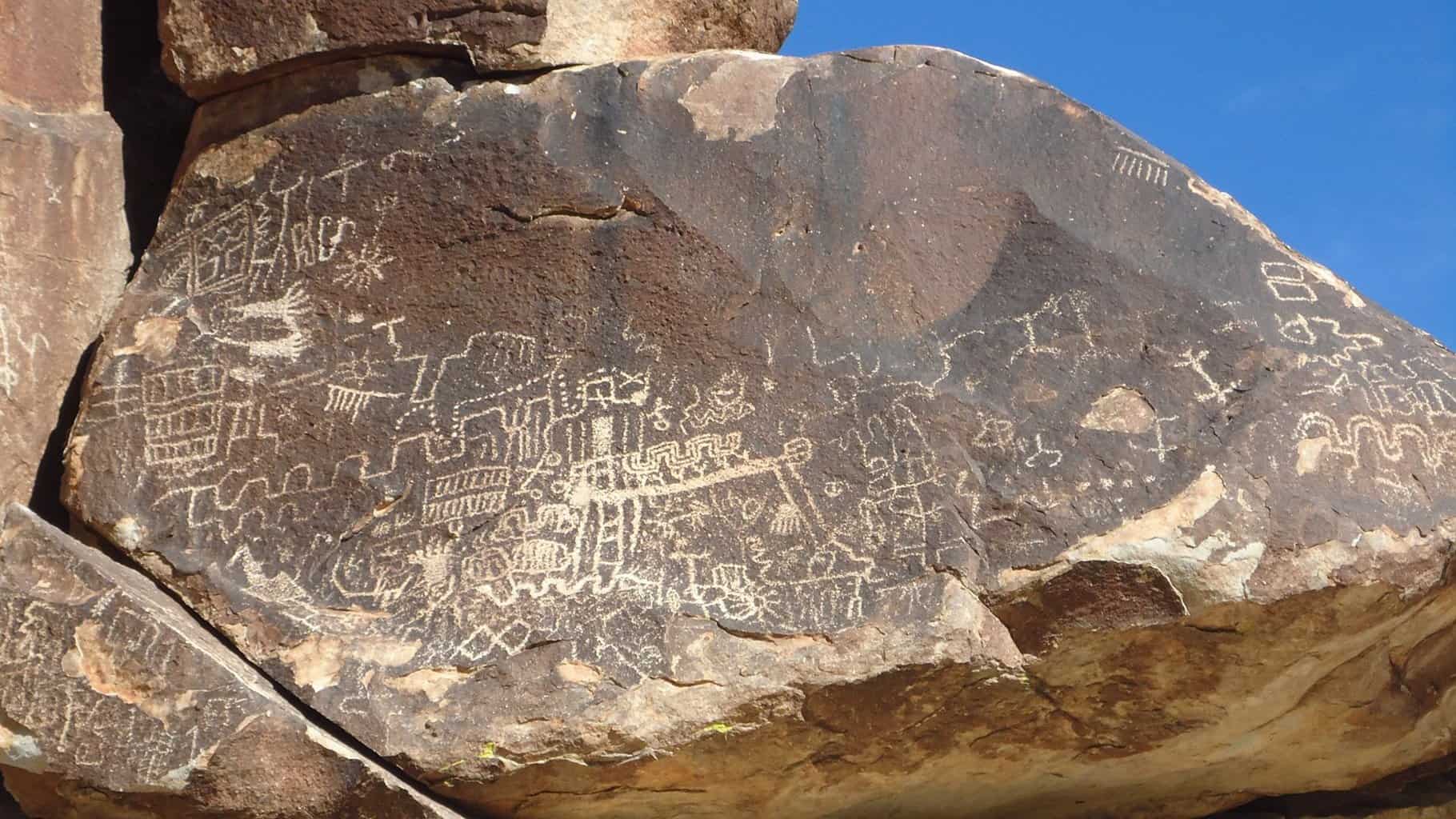 One of the main panels of prehistoric engravings in Grapevine Canyon, near Laughlin in Nevada.

Archaeology and History Sites in Nevada 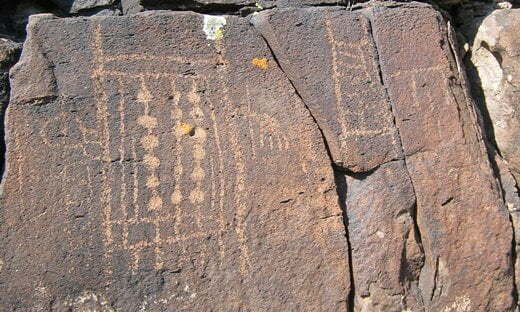 The Black Canyon petroglyph site is located in the Pahranagat National Wildlife Refuge, Lincoln County. Some 100 individual engraved panels at seven distinct locations cover an area of 4 hectares. A striking feature of the site is the specific style of the engraved human figures, headless rectangular bodies with either internal geometric patterns a solid, pecked-out interior – known as the ‘Pahranagat Representational Style’.

Completed in 1861, Fort Churchill in Lyon County was established by the U.S. Army in an area that had witnessed clashes between European American setters and indigenous Paiute and Bannock groups in the preceding year. Now in a state park, the fort has been partially reconstructed so that visitors can gain a better understanding of life on this frontier during the mid-19th century. Hiking trails allow visitors to explore the area.

Grimes Point near Fallon marks an area of arid desert land where there is much evidence of prehistoric activity still visible. This includes petroglyphs carved into the basalt boulders and Hidden Cave, a site that was used for storage by prehistoric communities living in the area. Visitors can follow a trail across Grimes Point to take in a number of the archaeological features.

The Las Vegas Mormon Fort is the oldest surviving structure built by European Americans in Las Vegas. Mormon missionaries established the defensive settlement in the 1850s to protect themselves from attacks by indigenous groups. They abandoned it shortly after the Utah War. Possession of the site transferred across various groups during the later 19th and 20th centuries before it became a heritage attraction in the 1990s.

Little Church of the West

The Little Church of the West on the Las Vegas Strip is one of the many wedding chapels the city is famous for. Built in 1942, it was the first building specifically designed as a wedding chapel here. Although it has been moved on several occasions, its physical appearance has remained largely unchanged since being built. When weddings are not taking place here, the church is open to visitors.

Lovelock Cave in Churchill County has been used as a place of storage at many points throughout prehistory. Excavations began in 1912 and revealed a wide range of artefacts. Due to the unique conditions in the cave, objects made using fabric has survived well, including a cache of 2,000 year old duck decoys. Panels provide information abut the cave and its archaeological importance.

The Nevada State Capitol in Carson City is the political heart of ‘the Silver State’. Designed by architect Joseph Gosling in a Neoclassical Italianate style, it was built between 1869 and 1871. Significant expansion took place in the early 20th century with the addition of side wings. The second floor houses a range of historic artefacts, including a chair made entirely from elk antlers.

The Pioneer Saloon in Goodsprings is a historic drinking establishment built in 1913, which still operates as a saloon. Its walls are made from stamped tin, manufactured by Sears and Roebuck. Bullet holes can still be seen in one wall where a scuffle broke out in 1915. Various motion pictures have used the saloon as a filming location; it was here that the actor Clark Gable came after learning of his wife’s death.

Not far from the town of Austin is Stokes Castle, ruins of a three-storey stone structure. The mine developer Anson Phelps Stokes built the tower in 1896-97 hoping to use it as a summer home. He and his family used it for only a short period and it ultimately fell into a state of disrepair. The Austin Historical Society now manage the site, which offers impressive views of the surrounding landscape.

The Ward Charcoal Ovens in the Egan Mountain Range of eastern Nevada comprise six conical structures built in the late 19th century. The nearby town of Ward emerged in 1876 to facilitate the local mining industry; it is now a ghost town. The ovens were constructed by itinerant Italian builders and operated between 1876 and 1879, burning timber for charcoal to be used in the ore smelting process.

Popular Tours and Activities in Nevada with Viator

The Boulder City/Hoover Dam Museum can be found on the first floor of the Boulder Dam Hotel, a Colonial Revival style structure built in 1933. The museum deals with the pioneers who settled Boulder City and who, in the midst of the Great Depression of the 1930s, built the Hoover Dam. An ideal site for those with an interest in the history of monumental construction projects. Entry is free.

In the town of Henderson, the Clark County Museum focuses on the history of southern Nevada. On display are archaeological and historical artefacts from Native communities such as the Paiute, as well as European American settlers who came here as railway labourers, miners, and gamblers. It partly operates as an open-air museum, showcasing eight historic buildings from around the county.

The Las Vegas Historical Society explores the heritage of this famous ‘City of Lights’. Its collection primarily consists of photographs depicting the city from the late 19th century, when it was still a desert, through to the recent past. The society has also collected a range of oral and written histories from the people of Las Vegas, helping to preserve the city’s heritage for posterity.

The Lost City Museum in Overton is devoted to the archaeology of the Pueblo Grande de Nevada, a prehistoric settlement built by ancestral Puebloans. The museum has a range of artefacts recovered from excavations at the site and gives visitors the chance to see some of the exposed ruins. Reconstructions also give the opportunity to see what these sites once looked like.

Opened in 2012, the Mob Museum in Las Vegas delves into the world of organised crime. Occupying the old Las Vegas Post Office and Courthouse, built in 1933, the museum has artefacts associated with the activities of criminal groups and law enforcement efforts to stop them. One of its most prominent exhibits is the wall against which the St. Valentine’s Day Massacre took place in 1929.

Nuclear weaponry loomed large over the 20th century as the United States faced off against the Soviet Union. Visitors can learn more about the development and use of nuclear technologies at the National Atomic Testing Museum in Las Vegas, opened in 2005. Although the focus is on the Nevada Test Site, operational since 1951, the museum also displays Native American artefacts from the site.

The Nevada State Museum at Carson City explores both the natural history and the human heritage of this southwestern state. Exhibits include the Native American communities of the area as well as a full-scale replica of an underground mine. The museum is partly housed in the Carson City Mint building, where coins were produced in the 19th century.

One of seven branches of the Nevada State Museum, founded in 1905. Exhibits explore both the natural history of the area around Nevada, which includes a range of palaeontological remains as well as the human history of the city. Permanent exhibitions are supplemented with a programme of temporary exhibits, while various special events take place throughout the year.

Fans of modern material culture, or the pinball machine more specifically, should check out the Pinball Hall of Fame in Las Vegas. The museum brings together a collection of over 200 pinball machines from different eras, all maintained in working order. This niche museum is run by pinball enthusiast Tim Arnold as a not-for-profit venture; all excess takings are donated to the Salvation Army.

Launched in 1985, the Virgin Valley Heritage Museum in Mesquite devotes its attention to the 19th and early 20th century pioneer settlements in southern Nevada. It brings together a broad range of artefacts originating in this period. It occupies a Vernacular Pueblo Revival style building that opened as a library in 1940 before becoming a hospital building and then a Scout troupe headquarters.

Popular Tours and Activities in Nevada with GetYourGuide