Haudenosaunee and Algonquian speaking tribes inhabited what is now New York State long before the arrival European settlers. Their history is accessible in the many museums and cultural centres around the state. After being established as a British colony in the 17th century, and named after England’s then Duke of York, the state became one of the most culturally and politically diverse of the nation’s 13 states. Whether your interests are in colonial or immigrant history, civil rights or the revolutionary war, the state and city of New York has much to offer with 22 National Parks, four National Heritage Areas, 27 National Natural Landmarks, 262 National Historic Landmarks, and over 5,000 listings on the National Register of Historic Places.

The ‘Moses of her people’, Harriet Tubman’s life and accomplishments are explored through this historical park. The park looks at her time as a conductor on the Underground Railroad and those that surrounded her. Her family home and church make up the bulk of this park, as well as a home for elderly former slaves which she founded and spent the last days of her life. Website

The ‘summer white house’ during FDR’s presidency, the US’s 32nd President’s home is preserved as a historical site commemorating his life. Springwood was Roosevelt’s home throughout his life, a place of retreat which he could bring politicians and foreign dignitaries, including the Queen of England. Roosevelt’s role in WWII, the Great Depression, and his life as a disabled man are all themes shown throughout the house. Website

This small and innocuous farmhouse in the heart of the Adirondacks was the home of John Brown, the radical abolitionist who led a famed slave revolt to seize an arsenal in West Virginia. His life and anti-slavery efforts are documented at this site, from his journeys in ‘bloody Kansas’ to stop the territory from becoming a slave state to his hanging in WV and eventual burial at this site. Website

Throughout WWII the US government rescued only 982 Jewish men, women, and children from the Nazi Holocaust, bringing them to a former military base in upstate New York. Not even officially refugees, these men and women lived a life between freedom and imprisonment in the semi-open camp as ‘guests’ of President FDR. The story of these refugees is told today through a museum in the administrative office of the former camp. Website

Both an architecturally striking and historically significant building, St. Paul’s has proved a continually important part of New York City. Completed in 1766, it was the main place of worship for several of the US founding fathers while New York was the nation’s capital. The church sits across from the World Trade Center site and in the months following the 9/11 attacks served as a place of refuge for emergency workers. Website

Dedicated to the history and rights of the LGBTQ community, this National Monument sits across from the Stonewall Inn where the 1969 Stonewall Riots began. Officially created in 2016 as the first national monument to LGBTQ history, this site does not yet have a full visitor center or much regular programming but continues to commemorate and interpret the continual struggle for rights and freedoms within the American LGBTQ community. Website

An early 19th century mansion and two studios make up the bulk of this historic site – the birthplace of the Hudson River School of American painting. This first fully American major art movement was created by Thomas Cole who drew inspiration from the Catskill mountains surrounding the house. Today, works by Cole and other painters – both modern and from the Hudson River School – are exhibited throughout the site. Website

The author of the classic American tales, Rip Van Winkle and The Legend of Sleepy Hollow, Washington Irving called this small cottage/estate named Sunnyside his home. Originally built in the Dutch Colonial Revival style, Irving added Scottish Gothic, Tudor Revival, and even Spanish Monastic additions to the building over his life. Visitors can explore the house – the only home Irving ever owned – and see where he spent the last decades of his life. Website

Seneca Falls, NY was the home to the first women’s rights convention in the US, a formal meeting which declared the lines “all men and women are created equal” in its Declaration of Sentiments. This Historical Park tells the story of the Seneca Falls Convention through the church that it was held in, several preserved houses of notable participants, and an updated visitors center. Website

Albany Institute of History and Art

One of the oldest museums in the US, the Albany Institute of Art and History shares the stories of New York State’s capital and of upstate New York. The collection touches on a wide range of subjects from the Hudson River School, to colonial art, and even features a gallery entirely devoted to ancient Egypt. The museum is housed in three separate originally furnished buildings including a 19th century Beaux-arts mansion. Website

The first Smithsonian located outside of Washington D.C. and the only museum in the US solely focused on design. Both contemporary and ancient forms of design make up the museum’s collection which spans nearly 30 centuries of design history. Exhibits change frequently and range from wallpaper to Ellen DeGeneres’ personal design aesthetics and include a room where visitors can create and project their own designs. Website

The cultures of the Caribbean, Latin America, and other Latino backgrounds are explored in this museum which looks at the diverse roles of these cultures in New York’s neighbourhoods. The collection includes artefacts from a breadth of time, including pre-Columbian Taíno works as well as a large 20th century collection of works by Latinx artists in New York. Videos and oral histories are widely used to tell the stories of these long-marginalized people. Website

Museum of Chinese in America

Just outside of New York City’s Chinatown, the Museum of Chinese Culture explores the roles and histories of Chinese Americans in the city and the country. Oral histories, photographs, and various artefacts tell the stories of Chinese immigrants and their descendants. Both academic and personal, the collection covers topics from traditional cooking to post 9/11 New York, and the forms of persecution that many Chinese immigrants have and continue to face. Website

Museum of the City of New York

This museum explores the history and idiosyncrasies of New York City and the people who live there. Three full galleries are dedicated to telling just the history of NYC with the rest of the exhibition space looking at various areas of the city’s past including baseball, Broadway, and activism. The collection is especially strong in its photography and 18th and 19th century collections and consists of over 1.5 million items in total. Website

A 19th century historic synagogue in the heart of New York City, this museum looks at the history of Jewish immigrants to the US and New York’s Lower East Side. The building, which is the first synagogue built in the US by Eastern European Jews, hosts artefacts and displays on Jewish American culture, immigration and the immigrant experience, and even the restoration of the historic building itself. Website

National Museum of the American Indian

A Smithsonian museum in three parts, the Museum of the American Indian at the George Gustav Heye Center in NY explores the histories of native peoples from North, Central and South America. Permanent exhibits look both chronologically and geographically at the various cultures that have and continue to exist across the continents, while temporary exhibitions explore topics in Native cultures including war, discrimination and art. Website

The six nations of the Iroquois (also known as the Haudenosaunee) are the focus of this museum. Various historical artefacts are displayed at the museum including traditional pottery, beadwork, and works made out of cornhusks. Contemporary issues as well as traditional histories are explored, including the ways that native people have been depicted throughout much of American popular culture. Website

Dedicated to the long history of immigrants and their history in the country, the Tenement Museum is a relatively recent museum founded in 1988. The buildings in which the museum is housed were actual tenements, homes for an estimated 15,000 people from over 20 countries. Several period apartments from the mid-1800s to the 20th century can be visited as the museum looks at the roles and treatments of immigrants in the country. Website 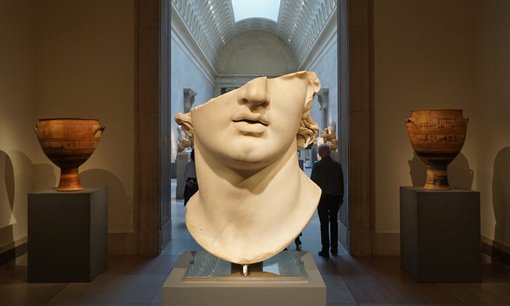 The Governor of the State of New York gave the green light for Museums and historical sites and monuments to reopen on 24 August 2020. To reopen museums and cultural institutions are required to follow certain guidelines. As these attractions prepare their exhibition spaces for visitors they have announced dates and conditions for their reopening. See our list of Dates for When Museums in New York City Will Reopen >>