As a museum that displays an impressive permanent collection and hosts a diverse series of temporary exhibitions, the Royal Albert Memorial Museum & Art Gallery in Exeter is well worth a visit. Housed in a local Red Sandstone Gothic Revival structure, the Victorian building was extended and enhanced during a ten year renovation, and the museum’s acclaimed reputation has continued to grow since its reopening in 2011. Yet whilst it is clearly committed to illustrating Devon’s rich history, the RAMM is a museum with an international focus, and displays objects from across the globe, both in its internationally-dedicated World Cultures gallery and elsewhere in the museum. Here are a series of picks from the vast array of historical artefacts, fine art, geological and natural history specimens that the museum holds. 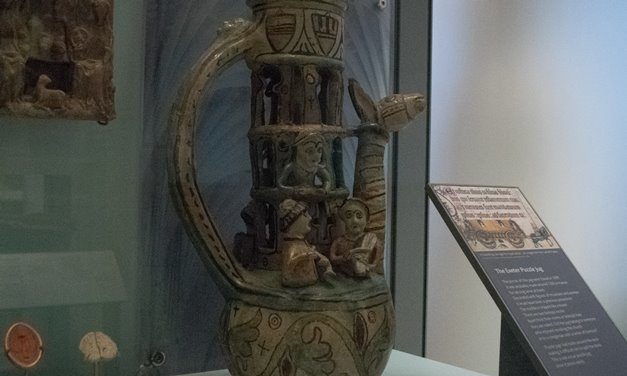 Puzzle jugs sought to confuse the consumer by causing liquid to spurt out unexpectedly from hidden holes. And this object continues to fool us with its slightly misleading name. The title suggests it was a local creation, the 14th century jug was in fact made in Medieval France and later unearthed in Exeter in 1899. Whilst it was found in pieces, this medieval item is not a true puzzle jug, and serves its expected purpose once the owner realises how to direct the liquid into the spout instead of its hollow centre. A curious object all round, it contains a controversial criticism of the church, depicting two naked bishops with dancing girls and musicians.

Today this stuffed Bengal tiger appears unsettling, but it bears witness to a devastating popular practice during the rule of the British Raj. Presented to the museum in 1913 from one of the 39 tigers shot by King George V in 1911, it highlights a time when tigers were demonised as bloodthirsty animals. Killing them was presented as a glorious, necessary practice. Following India’s declaration of independence in 1947, and the later work of the Prime Minister Indira Gandhi in the 1960s, hunting restrictions were put in place to protect these animals. Unfortunately, tigers are still hunted for use in medicines, and remain an endangered species. 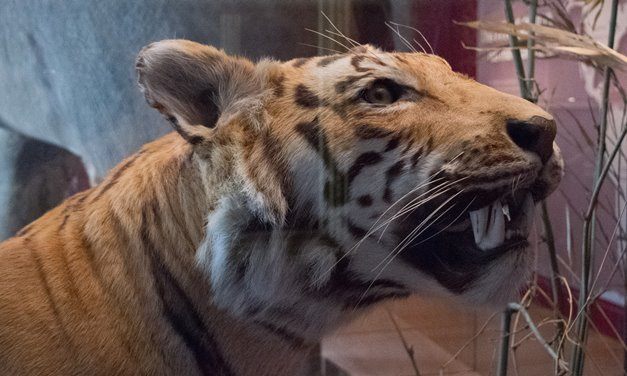 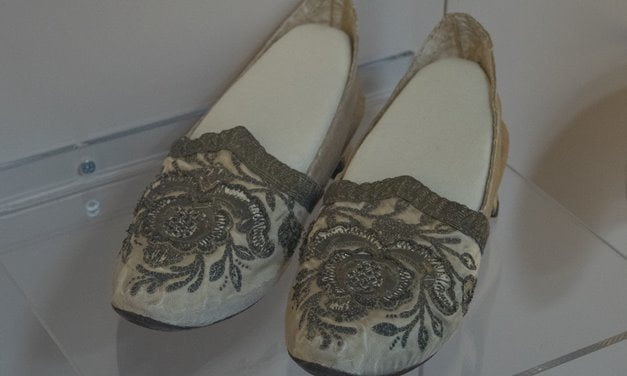 These luxurious silk and satin shoes were made in Turkey at a time when the magnificent splendour of the Ottoman Empire, a power held by a single family, was beginning to fade. After ruling for over 600 years and presiding over much of the Middle East, the Empire began to founder as European trade threatened its power. The Ottoman influence still appeared in Western 18th and 19th century dress however, and was particularly apparent in the elaborate headdresses of the Regency period. As a result, shoes such as this seem relatively familiar to the European eye, but they are from much further away than you might expect.

This magnificent feathered piece is a spectacular Ndungu spirit costume. Gathered by the notable collector Richard E. Dennett during his travels in Central Africa in the late 19th Century, the two-faces are a common feature in such costumes, and probably refer to the spirit’s ability to face the world of the living and the dead at once. Thought to be a figure able to judge those who had broken the rules of Kongo society, this costume is made from vegetable fibres, wood, pigment, and hornbill feathers, and is a beautiful object that is well worth closer examination regardless of your historical or anthropological interests. 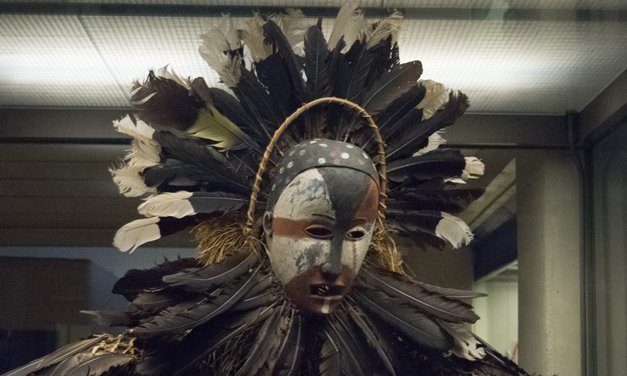 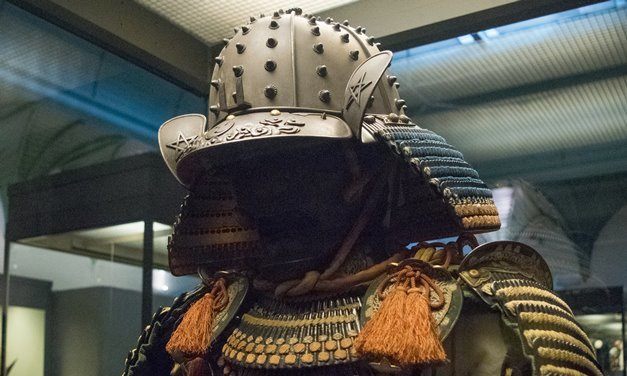 This Samurai Armour is more probably composed of several different sets of armour. It was a common practice for pieces of battle-won armour to be placed together to make a suit, and certainly this helmet, or kabuto, would not originally have belonged to the main body of the armour. Highly decorative, but also highly functional, Samurai armour had a dual-purpose. The gessan, or skirt pieces, such as the ones here for example, were detachable and could be removed for marching. Such suits were intended to appear imposing and impressive, and the inside of the lacquer facemasks were often coloured red to frighten the enemy.

A collection of objects that serve as a testament to a popular cultural tradition that originated in Southern Asia, these beautiful silver containers were actually used for betel nut chewing. Lime paste and acrea palm nuts would often be mixed with tobacco, and the combined substance would then be chewed to cleanse the palette. Despite attempts to ban the practice due to health fears, betel nut chewing still occurs, and sets such as this are often kept as family heirlooms. Products of a pastime that spread throughout Thailand, Burma, Laos and Cambodia, this particularly ornate set of pots is from the Malay Peninsula. 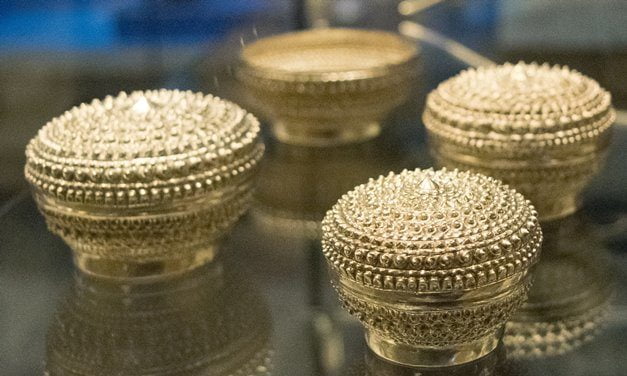 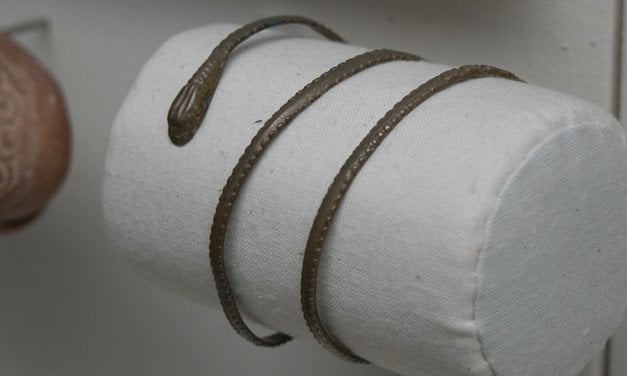 This small copper alloy object would once have been worn on the arm of an ancient Egyptian as a piece of jewellery. A decorative, but also possibly a protective piece, snakes provided suitable subject matter for bracelets and armlets as they could entwine convincingly around the body. However, here the circular composition also emphasises the cyclical nature of the snake, which many ancient civilisations saw as a symbol of regeneration due to its ability to shed its skin. In ancient Egypt, cobras were particularly lauded, and they became a symbol of royal power and divine authority known as ‘the Uraeus’.

A cap made from the web of the golden orb spider may seem to be a slightly unusual choice for a museum, but the RAMM showcases things of scientific as well as historical interest. Golden orb spiders weave incredibly strong webs that glow gold in sunlight, and whilst former scholarship has suggested caps such as this were used to kill the widows of high-ranking men so that they could join their husbands in the afterlife, recent research suggests this was a myth constructed by missionaries. It is more likely a cap was used by men in initiation ceremonies. 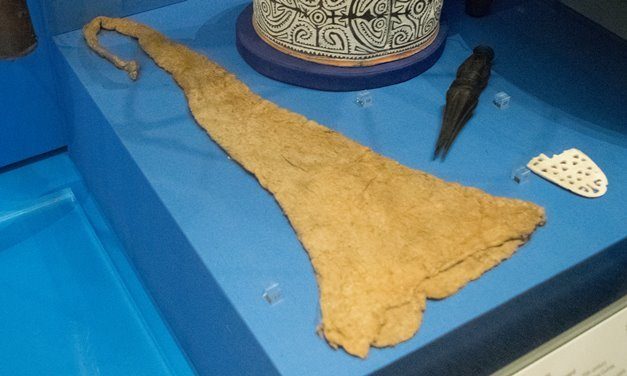 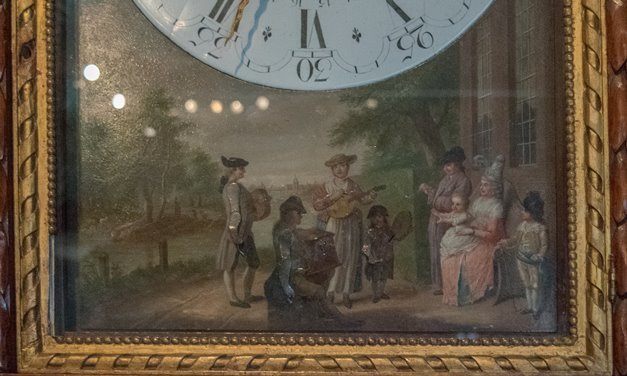 This beautiful eighteenth-century timepiece is an excellent example of Dutch clock manufacture and trade that flourished during the 1700s. Not only does it tell the time, but it also plays music, a feature that only the richest people could afford. Intended to charm the ear as well as the eye, the detailed painting on the front of the piece is particularly beautiful. While inside the timepiece contains 38 organ pipes, which play various dance tunes. It was made by the master clockmaker Jan Hendrik Kuhn for a Mr Teschemaker, and was later brought to Devon by one of his descendants.

An item that imitates the type of hat usually worn by a Daoist priest, this object illustrates the emergence of the theatre as a site of political and religious debate in nineteenth century China. During the Qing Dynasty of 1644- 1912, Daoism fell out of favour as China’s ruling powers sought to reinstate Confucian ideals and reject rival philosophies. Chinese theatre is an intricate combination of dance, martial arts, music, and acrobatics, elements of costume, including pieces like this hat; all of which contributed to the overall message of the performance. Richly embroidered with tasselled threads, this item is an object of nostalgia and light-hearted ridicule. 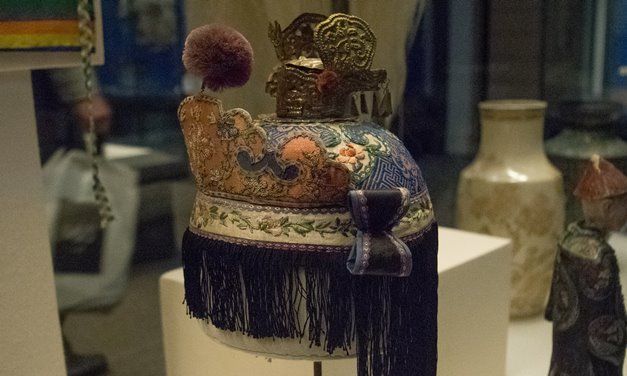 This is a personal selection of ten artefacts with fascinating histories and stories to tell from around the world. In all the museum has over a million objects, only a small fraction of which are on display at any one time. If you are planning a visit, or if you have already been, leave a comment below and tell other readers of Archaeology Travel which are your favourite objects.

Explore More of the Past in Exter 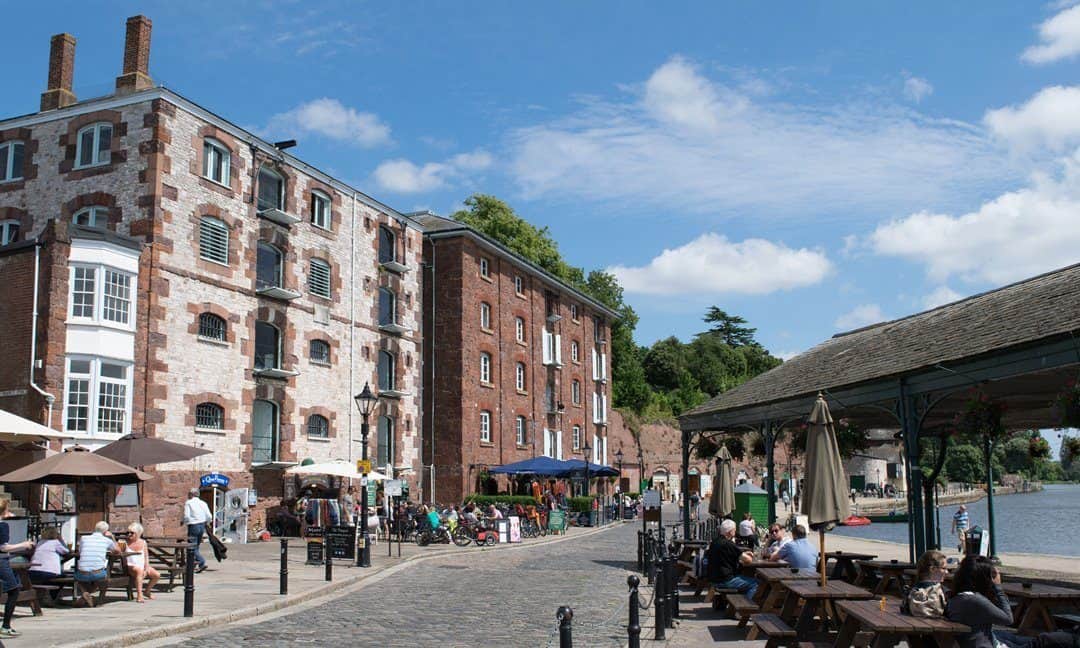 The capital city of Devon in the south west of England is both vibrant and modern, but still has many fascinating places of interest from 2,000 years of history from the Romans to World War 2. A world-class museum provides an engaging introduction to Exeter and its surroundings, for visitors of all ages. There are many fascinating attractions around this beautiful city, including Medieval underground passages unlike any in other cities of England, a magnificent catherdal with the longest, single stretch of vaulting, a Roman and Medieval wall, and a historic quayside that has served the city since Roman times. Visit Exeter >> 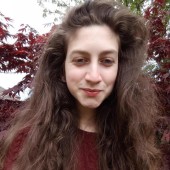 I am a history enthusiast and heritage volunteer, with interests ranging from Gothic architecture to nineteenth-century painting. I love learning and writing about the world around me, and recently completed a degree in Art History and English Literature at the University of Exeter. When I haven’t got my nose in a book, I’m usually doodling, and I am currently working on a series of drawings of Victorian women.