The Doom Painting of St Thomas’s Church in Salisbury is the largest and best preserved in the UK. Painted around 1470, it was covered with lime whitewash during the Reformation and not seen again until 1819. Now following its most recent restoration in 2019 it is back to its vibrant, detailed glory and is essential viewing for anyone visiting Salisbury. 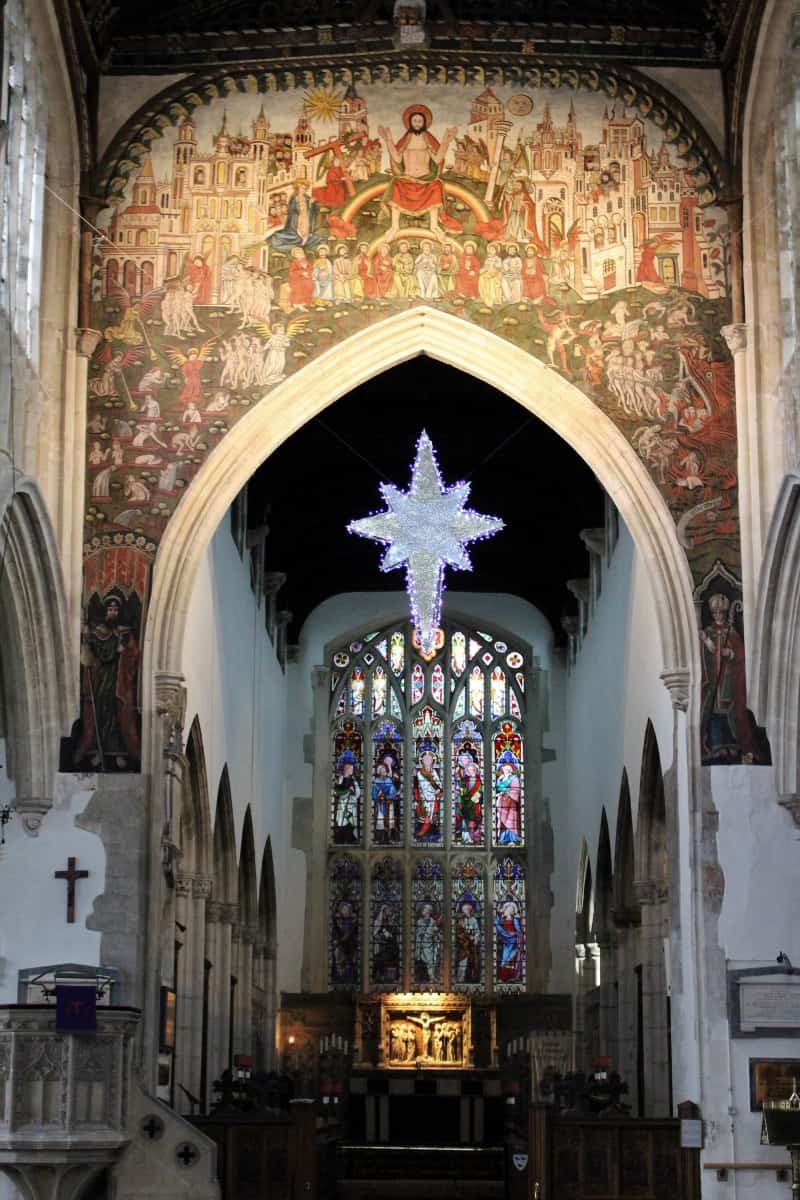 The nave of St. Thomas’s Church is decorated with this incredible Doom Painting – the largest and best preserved in England.

What Are Doom Paintings?

The theme of a Doom Painting, often simply called a ‘Doom’, is the Last Judgement. This is the final judgement by God of all people, and depending on how they lived their lives they would either ascend to heaven or descend into hell.

Doom paintings were placed either at the rear of the church on the liturgical wall, or at the front of the church. At the front they were placed on the chancel arch so that the congregation could not avoid seeing and contemplating the imagery when looking forward during the service. If your mind wandered and your eyes strayed, the imagery above would have quickly brought you back to focus on the sermon being delivered. The painting was a striking visual warning of the fate that would befall you if you did not follow your religious instruction.

Doom paintings were once a common feature in the churches of England. Although all of them were painted over during the Reformation, about 60 have been restored. Some well preserved examples can be seen in the Holy Trinity Church in Coventry, St Peter’s church in Wenhaston, and Waltham Abbey. A list of towns in England with churches that have Doom paintings can be found on Wikipedia. But it is widely accepted that the finest surviving example is that found in St Thomas’s Church in Salisbury, Wiltshire. 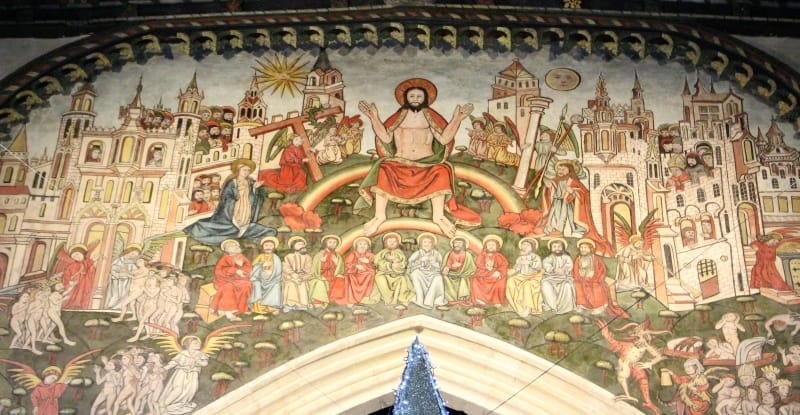 A close up of the chancel arch, and the upper section of the painting that depicts Jesus and his Apostles.

Painted by an unknown English painter who was heavily influenced by the contemporary Flemish schools, it was painted around 1470 when the church building was undergoing expansion. After just over a century of dominating the church and the thoughts of its worshippers, it was covered up in the Reformation, obliterated by coats of whitewash. It remained forgotten until 1819, when faint traces of colour emerged during cleaning. It was uncovered, a drawing was made, and then for some reason it was recovered with whitewash.

Here the painting fills the chancel arch and the spandrels. As with other doom paintings Christ is at the centre seated on a rainbow, with his feet on a smaller rainbow. His hands are raised. Both his hands and feet show the signs of his crucifixion, with blood running from them. Behind him, angels hold the cross, his crown of thorns, a pillar, a sponge, spear and nails. Further behind the Kingdom of Heaven is the Star of the East and the Sun of Righteousness. To his right is the Blessed Virgin and to his left is John the Evangelist. 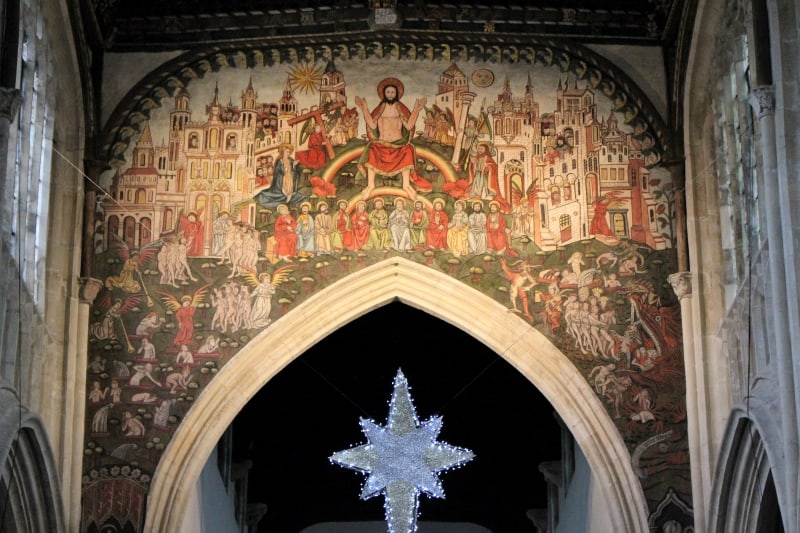 The painting continues down the sides into the spandrels either side of the nave.

Seated in a row beneath Christ’s feet are the twelve Apostles. They are ‘sitting in judgement’ of the twelve tribes of Israel.

What is beneath the Apostles, into the spandrels therefore lower down and easier for church-goers to see, are the stark warnings this painting was intended to convey.

On the left hand side we see a burial ground set in a green garden. The dead emerging are from their graves, helped by angels with trumpets. The dead at the bottom are emerging fully wrapped in shrouds. Some are casting off their shrouds while others are entirely naked, except for those with hats: a Bishop’s mitre, a labourers hat and a crown. No one is beyond judgement. The angels are leading the groups of the naked into heaven, gazing beatifically at their smiling faces. 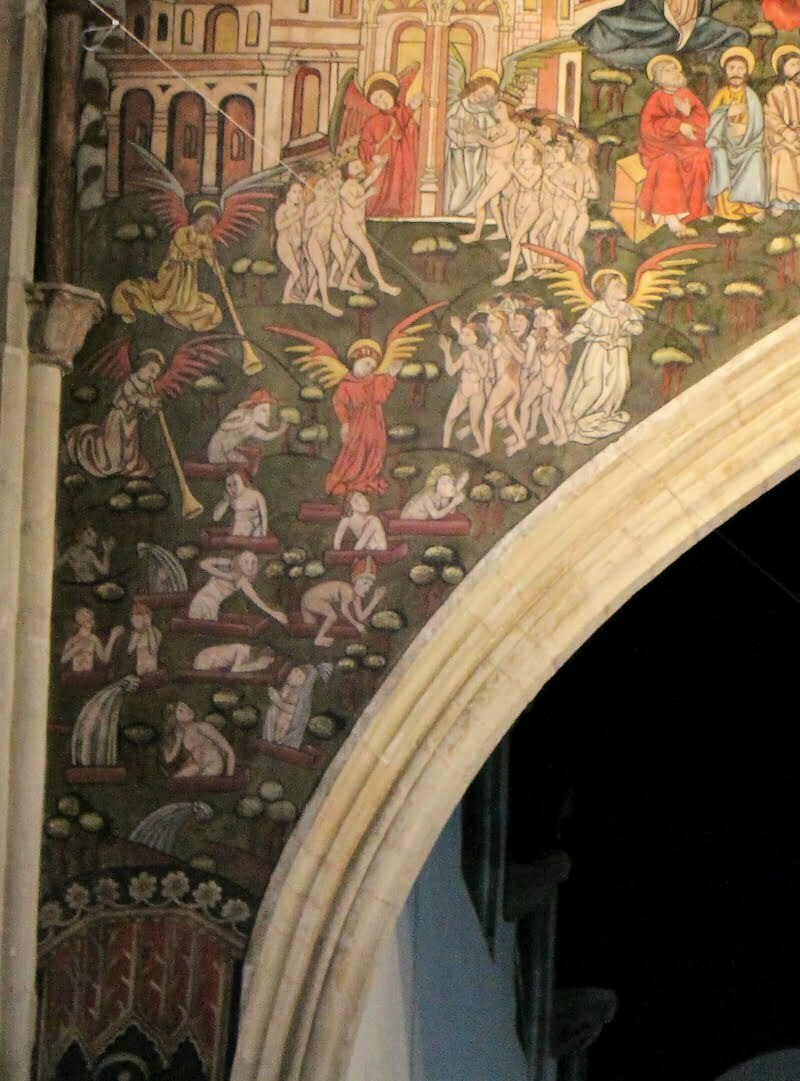 A close up of the left hand side spandrel, where you can see the righteous ascending into the Kingdom of Heaven.

Imagery on the right hand side of the nave contrasts markedly with that on the left. Here we see the fate of evil sinners. Flames are rising from the ground where the dead are emerging, their bodies contorted in pain. Dragged out by demons, they are bundled together in chains and forced into the mouth of a fiery dragon. The mouth of hell. His jaws held open by two demons. They are also naked except for some with hats, a Bishop’s mitre and two crowns. Many figures are depicted clutching their heads in agony. An angel is trying to encourage them into the Kingdom of Heaven, but it is too late for them, they are whisked away by demons.

Local lore has it that one of the faces of sinners depicts Agnes Botthenham. She was the landlady of the Rydedorre (now the Rai d’Or public house) in Salisbury. This was a house of ill repute where women are said to have hung out of the windows selling their wares. If Botthenham is indeed one of those amongst the sinners, this is a little unfair. She later repented and founded the Trinity Hospital for the Poor in 1390, which is still in existence today as Salisbury Almshouses. You can see these on our Self Guided Tours of Salisbury, which we recommend starting at St Thomas’s Church. 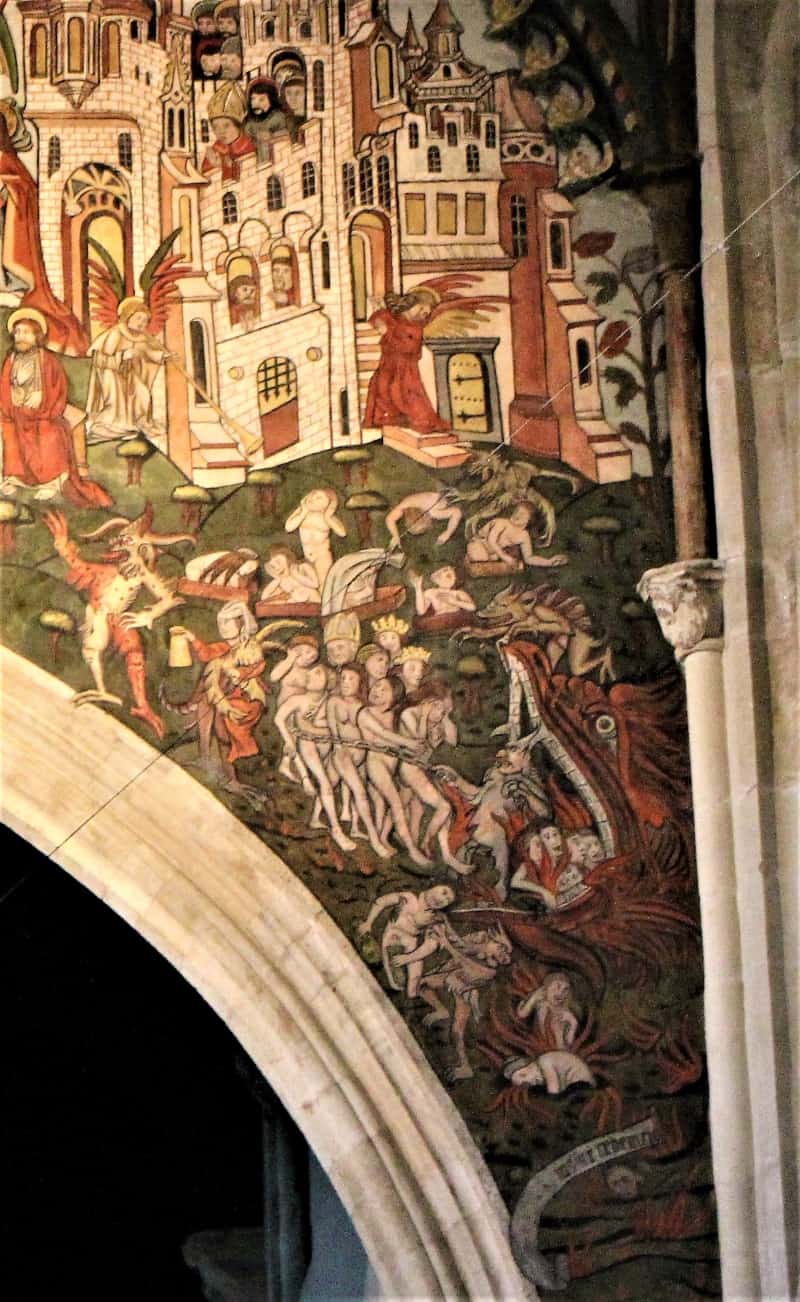 On the spandrel to right of the nave we see sinners being dragged into the mouth of hell.

The demons are impish little things and quite different from those depicted in other Doom paintings. In others, demons are often large, hulking, clumsy beasts wielding pitchforks or turnspits. Here they are depicted as small and agile, mischievous rather than evil personified.

The Prince of Darkness stands between the Apostles and sinners, with the head and feet of a beast, one bird-like foot peeking cheekily over the painting and onto the bare stone of the chancel arch. With his hand perched coquettishly on his hip, he is being handed a drink by the only clothed sinner there, a woman with a whimple who seems to be hugging a demon. A scroll at the bottom says Nulla est Redemptio – there is no escape for the wicked.

The whole painting is quite something to behold. And now after its most recent restoration in 2019, the pale colours have been transformed into vivid, detailed depictions of the Judgement. It was restored in phases, starting with brushing off all of the dust and securing the painted plaster that had become detached. It was then cleaned with fine decorators brushes and sponges and a protective coat added. Hopefully it will now last well into the next century, providing a must-see attraction for years to come for visitors to Wiltshire in southern England.

What Else is there to see in St Thomas’s Church?

St Thomas’s church is one of Salisbury’s most important attractions. Besides the Doom Painting, there is much more of interest for visitors to see that tell the history of the church and the community it has served for some 800 years. Including a 16th century Lady’s chapel, a Victorian font and a strikingly modern nave altar that was constructed in 2020.

Of particular note is the tricephalous Trinity – a carving of three faces in one. This feature was quite common in churches between the 15th and 17th centuries (See Examples on Churches in Northern France). In 1628 Pope Urban banned further representations of the tricephalous Trinity. The example in St Thomas’s was in fact rediscovered during the restoration of the Doom painting, and reported on the Diocese of Salisbury’s Website.

There are in fact 20 other features of the church, all included in a Free, Online Guide produced by the staff at St Thomas’s Church. The guide includes maps showing the location of each feature, with a brief account of each.

Where is St Thomas’s Church?

The Paris Church of St Thomas and St Edmunds is in Salisbury city centre. You can find the exact position on our Interactive Map of Archaeology and History Sites in England. The church is about a 10 minute walk from Salisbury railway station. For those visiting by car, there is no parking available at the church. Three public car parks are close by and within easy walking distance: Central Car Park, Old George Mall and Brown Street.

The church is open to visitors from 09h00 to “early evening”, according to the website.

Entrance is free, but a donation is requested. The Guild of St Thomas and St Edmund, a registered charity, has been set up to raise funds to renovate this internationally important medieval church. You can donate online to St Thomas’s directly.

On Tuesdays and Saturdays visitors can get tea and cake in the People’s Vestry. There are also a collection of second hand books to browse. And WiFi is available in the church, free of charge.

How Accessible in St Thomas’s Church?

Although St Thomas’s Church is a typical historic building, with low level light in some places and uneven floors, ramps have been installed to enable wheelchair users to access most parts of the church. A hearing loop has been fitted for services and events.