The village of Downton, just six miles outside Salisbury, has a history stretching back to the neolithic. A motte and bailey castle, built in the early 11th century, forms the basis for eight acres of landscaped gardens next to the River Avon, which are open to the public and free to visit. They make a great place to visit for a walk, or as the starting point for one of the many longer river walks in the area. 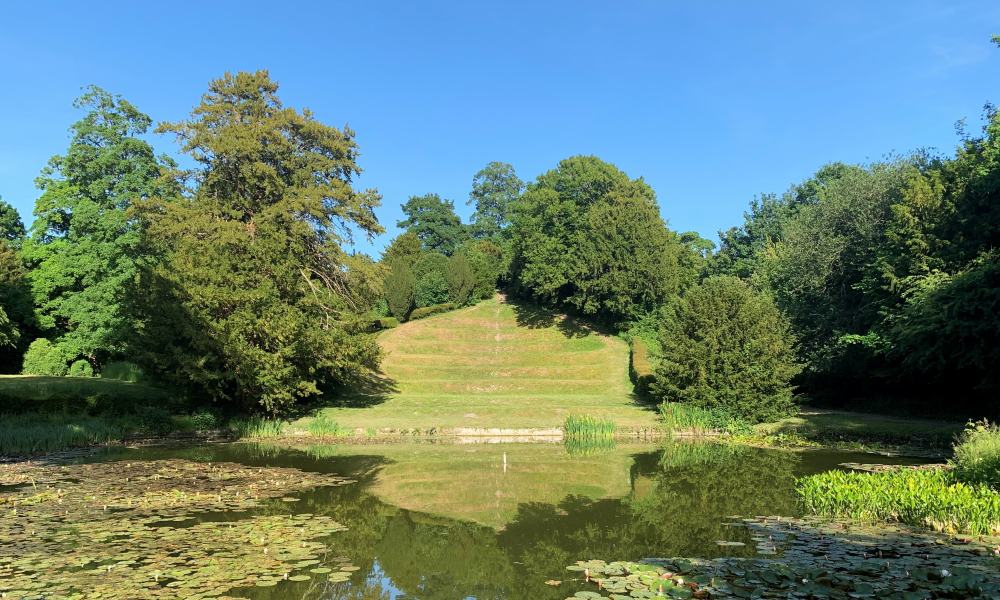 The amphitheatre made from the castle earthworks was once a popular place for performing plays. An 18th century Temple of Mercury once stood at the top of the mound.

Downton is a small village with a big history, with evidence being found for Mesolithic, Neolithic and Iron Age occupation. Excavations in the 1950s found a Roman villa; a long narrow building facing west with seven rooms and an attached bathhouse. Below the villa leading down to the River Avon was a well, a large corn drying oven, outbuildings, drainage ditches and roads. The most impressive find was a large mosaic floor from the central room in the villa with a design of a drinking cup with handles shaped like dolphins. Dating of the objects put the villa at late 3rd to early 4th century AD. Sadly there is nothing left to see of the villa, with a housing estate, Moot Close, now built over it, but the mosaic is in the Salisbury Museum and is well worth a visit. 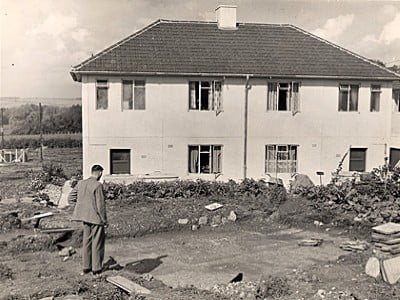 The discovery of the mosaic – apparently found when the resident was installing a washing line in his garden! Photograph © The Salisbury Museum 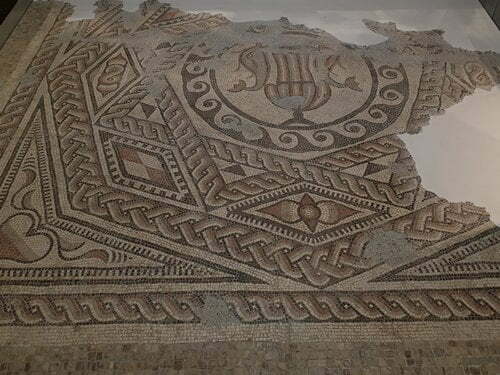 The Downton Mosaic is now housed in the Salisbury Museum.

Just adjacent to the site of the villa is the Moot. Moot is a Saxon word for meeting place, which the area may well have been, but the earthworks you see there today are from a Norman motte-and-bailey castle. Downton, recorded as Dunton in the Domesday Book, was owned by the bishops of Winchester from at least the late 8th century. It is believed that Henri de Blois, the Bishop of Winchester, brother to King Stephen and grandson of William the Conqueror, built the castle in 1138 during the civil wars of 1135 – 1153. Known as ‘The Anarchy’, the civil wars saw the Bishop support his brother’s quest to usurp the throne and altogether he built six castles in 1138. 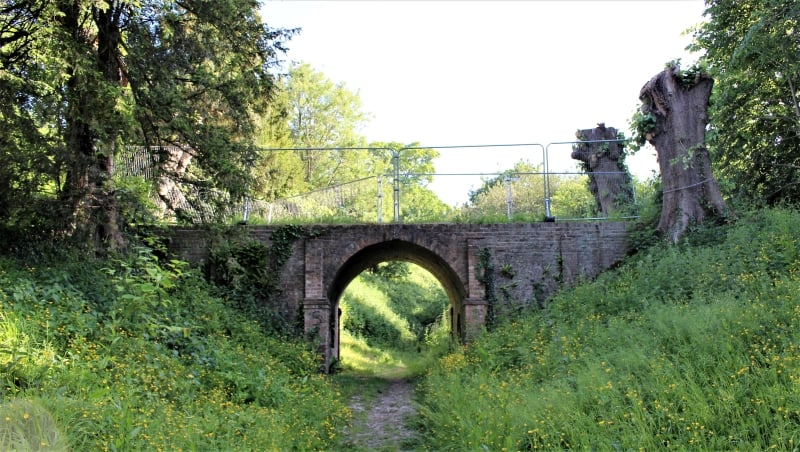 This bridge was built in 1815 and spans the inner ditch of the castle.

The site controlled the crossing of the river Avon, a valuable asset for church funds in time of need. The area was famed for its sheep and wool, exporting as far afield as Italy, and movement of the flocks would depend on the river crossing, making the area vital for trade.

The castle was probably built of wood, as no traces of Norman masonry have been found. The Earl of Salisbury captured the castle in 1147 until he was later starved out in a siege led by the Bishop, but in 1155 the castle was one of 375 which were ordered to be slighted (have their fortifications removed) by Henry II. 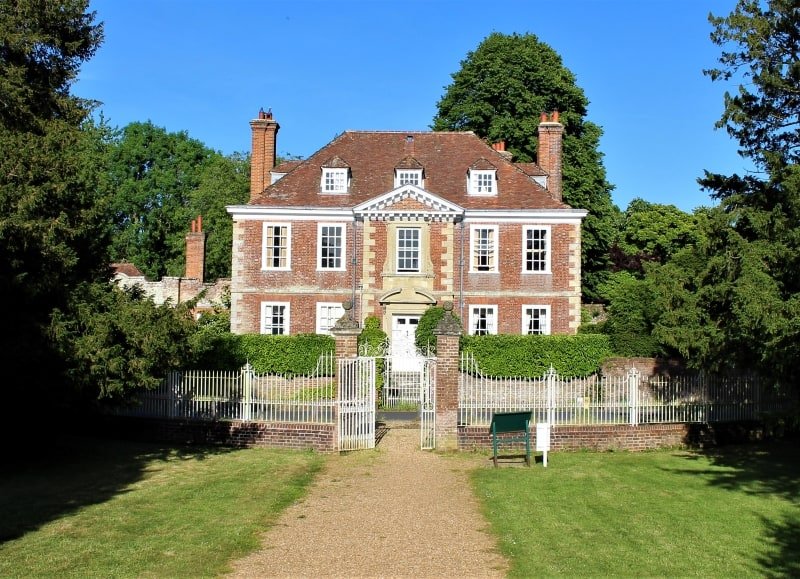 Moot House is a 17th century building whose owners originally owned the grounds of the Moot, landscaping the earthworks into pleasure grounds.

The bishopric lost the estate in the 16th century and nothing is known of the land until 1650 when Moot House was built, its land encompassing the remains of the castle. In 1725, the owners had the grounds landscaped into pleasure gardens which included an extensive planting of trees, a stone bridge, a temple, loggia and amphitheatre. 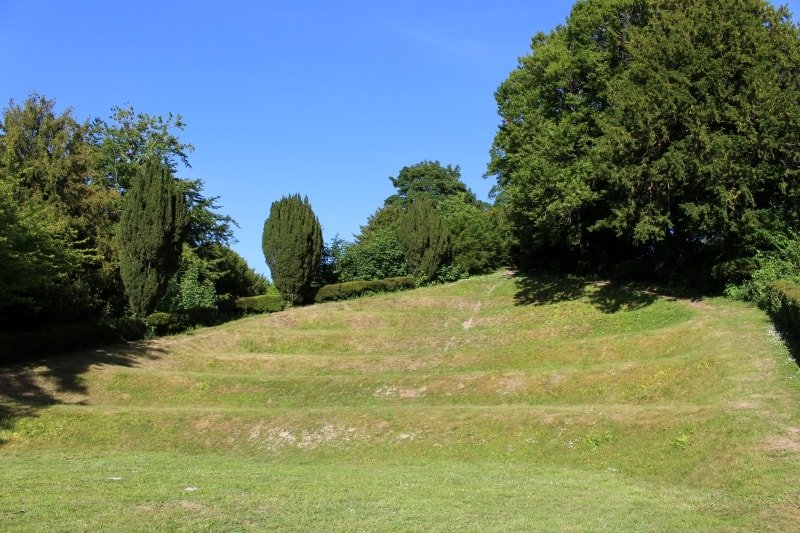 The amphitheatre consists of six terraces, 1.5 metres high which curve above a circular ‘stage’ in front of the lake.

For many years towards the end of the Victorian period to the Edwardian period, the Moot was used by locals for fairs and entertainments, with thousands of people arriving from Salisbury and beyond to join in the festivities. Shakespeare’s plays were regularly performed in the amphitheatre, with the legendary Sybil Thorndike playing Adriana there in A Comedy of Errors in 1908.

The house and gardens were separated in the 1970s, and the gardens entered a period of decline and vandalism, with the follies being destroyed and many of the trees being lost in the hurricane of 1987. In 1988 the land was transferred to the Moot Preservation Trust, and they started the painstaking process of restoration, trying to return it to its appearance in 1909, when the Moot featured in an article in Country Life magazine. 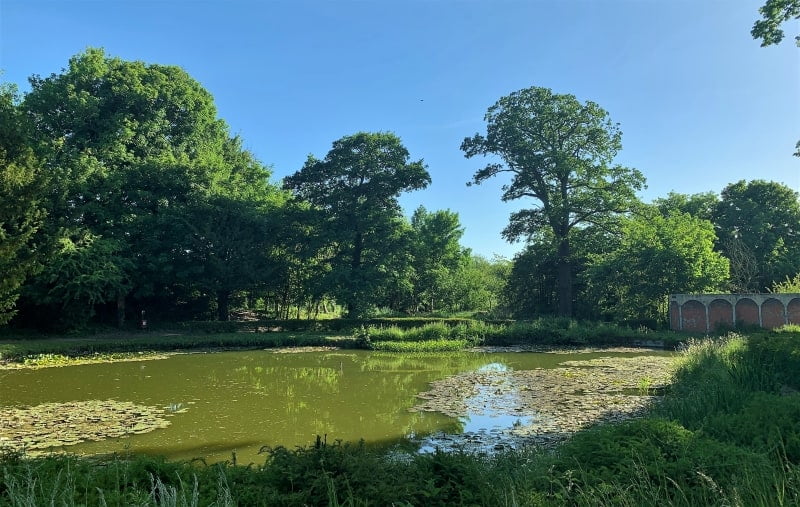 The pond is an unusual trilobate shape – a three leaf clover, and has an imitation loggia at the back, where the original 18th century loggia once stood. There are plans to replace this with a modern loggia when funds allow.

Limited excavations and surveys were carried out on the area in the 1990s, which confirmed the outer and inner ditches, but failed to clarify if the castle was set in a horseshoe shape open on the river side, or whether it was fully encompassed. They are also uncertain as to the presence of the motte, with the most likely conclusion being that it is the elevated ground which is now called Bevis Mount and which may have been eroded away over the years, or reduced in height when the castle was slighted.

The sunken lawn, also known as the sundial lawn, is surrounded by the mounds of the outer bailey. In the 18th century there was a sundial on the mound in the centre.

Evidence of its origins can still be seen in the gardens today, and the earthworks provide a fascinating backdrop to the layers of wildflowers, formal planting and trees. Bounded by the River Avon on one side, a road on one and houses on the other, the grounds are about eight acres in total. A mixture of open space, woodland and waterway, they make a lovely place for a stroll and a picnic.

It can be quite difficult to make out what is what in terms of the old castle, although the earthworks and series of mounds and ditches are clearly visible and fun to explore. Regular events are held at the Moot and it is a popular place for locals and visitors alike. It leads onto some lovely river walks, and is also a good stop off point for anyone walking the Avon Valley Path from Salisbury to Christchurch. 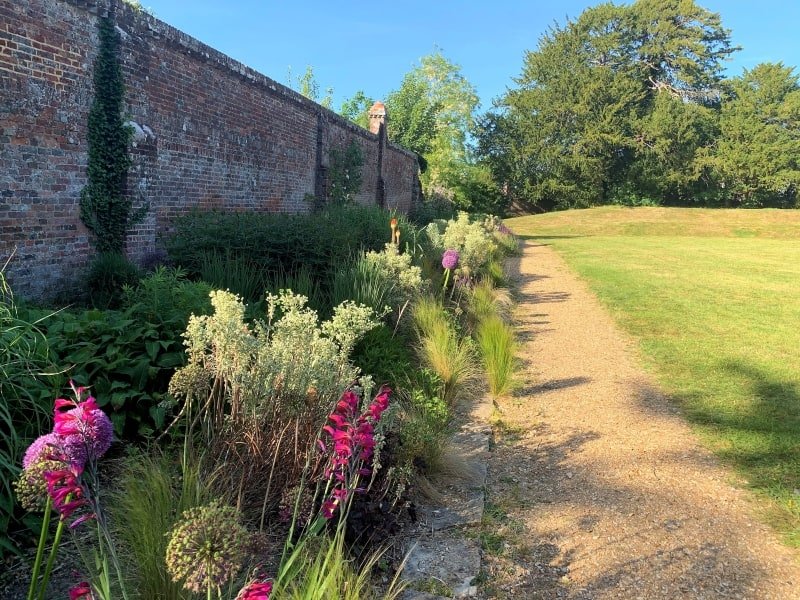 This 18th century wall at the back of the sunken lawn is now the backdrop to a herbaceous border. 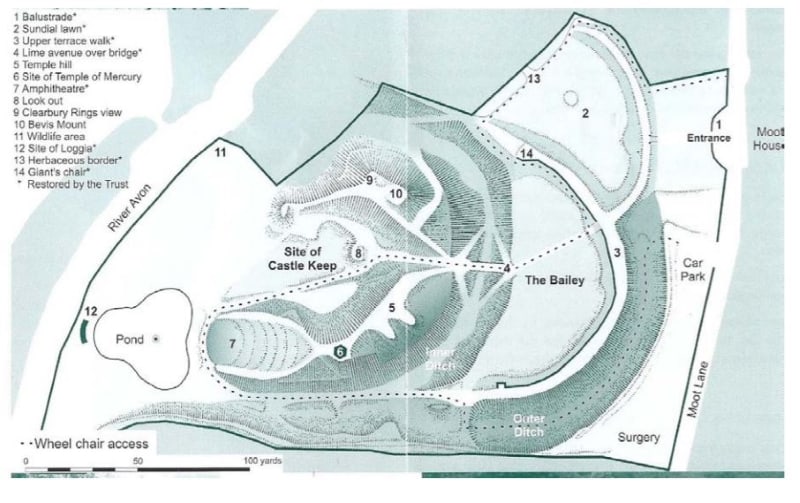 Downton Moot as it is today.

Visiting The Moot at Downton

How to get to The Moot

Postcode: SP5 3JP
What3Words: decorator.woven.yacht
Parking: There is a free car park on site
Public transport: Catch the X3 bus from Salisbury and get off at The Bull in Downton, then walk 15 minutes to The Moot – it is a lovely walk past some very old houses and cottages

When is The Moot open?

The Moot is open from dawn till dusk

How much does it cost to visit The Moot?

The Moot is free to visit, but they are always grateful for online donations to pay for the upkeep of the site.

Are there any facilities at the Moot?

There are no loos or refreshments, but there are some good cafes and pubs in Downton. I particularly recommend The Borough Cafe which is an 8 minute walk away and does an excellent hot chocolate and some lovely food.