From Hunting to Hillforts: An Afternoon in Epping Forest

Straddling the border between Greater London and Essex lies Epping Forest, a swathe of deciduous woodland measuring almost nine square miles. It is a designated ‘ancient woodland’, a legal term meaning that it has existed since at least the year 1600. In fact, enviro-archaeological evidence indicates that forests have covered much of this upland area for at least three thousand years, over the course of which local people have used them in many different ways. 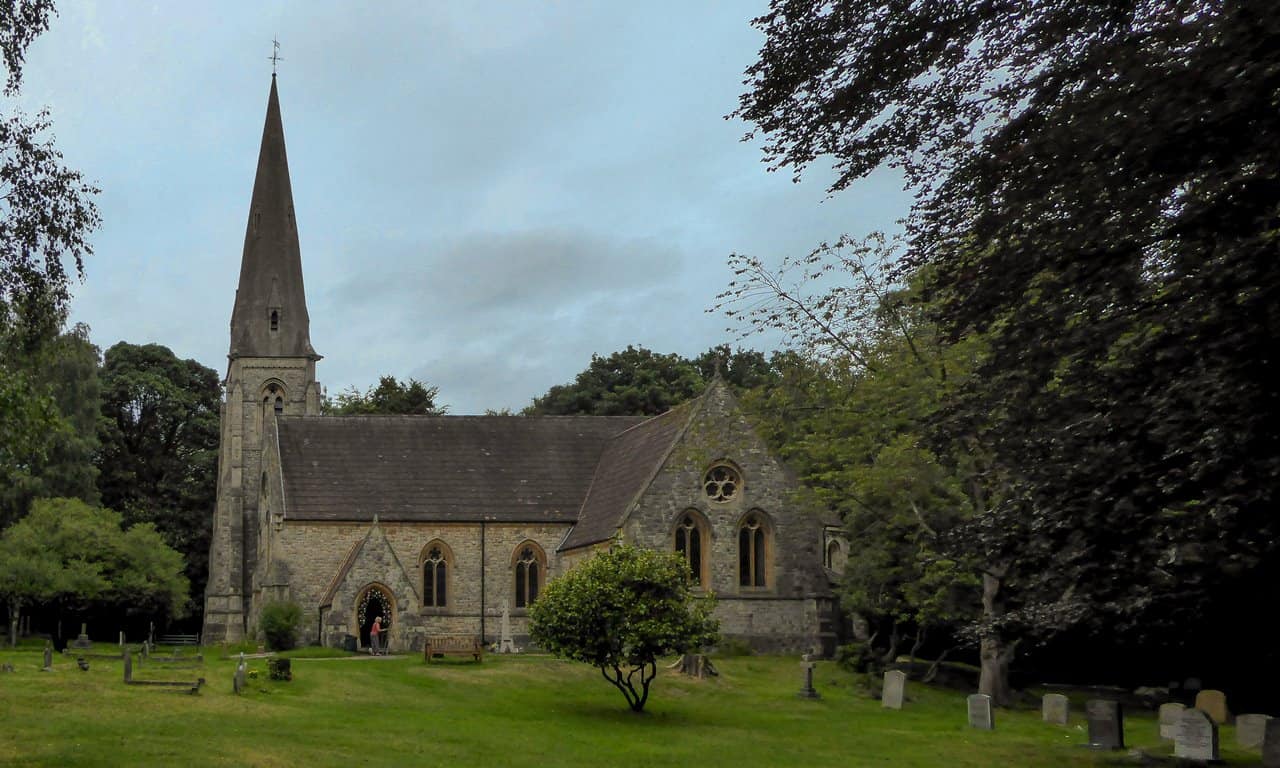 Archaeological evidence indicates the presence of humans in the area from as far back as the Mesolithic period, when nomadic hunter-gatherer bands likely moved through the woods in search for resources. More sustained settlement appeared in the Iron Age, by which time two hillforts stood within the boundaries of the modern forest. By the Romano-British period, several roads were traversing the woods, with additional evidence from this period coming in the form of a tile kiln in the north of the forest.

In the Later Middle Ages and Early Modern period, when Epping Forest was part of the considerably larger Forest of Essex, it was an important space for royal hunting. In the 18th century, highwaymen adopted the forest as one of their haunts, with local folklore claiming that the legendary anti-hero Dick Turpin had one of his hideouts there. Although a popular tourist spot since at least the 19th century, it has also retained its older criminal associations, becoming notorious as a dumping ground for murder victims.

Putting aside any fears that I might meet a grisly end, I ventured into Epping Forest with a friend on a summer weekday, a time when it was mostly the preserve of local dog walkers. We travelled by train from Central London’s Liverpool Street to Chingford, only a few minutes’ walk from the southern end of the wood. 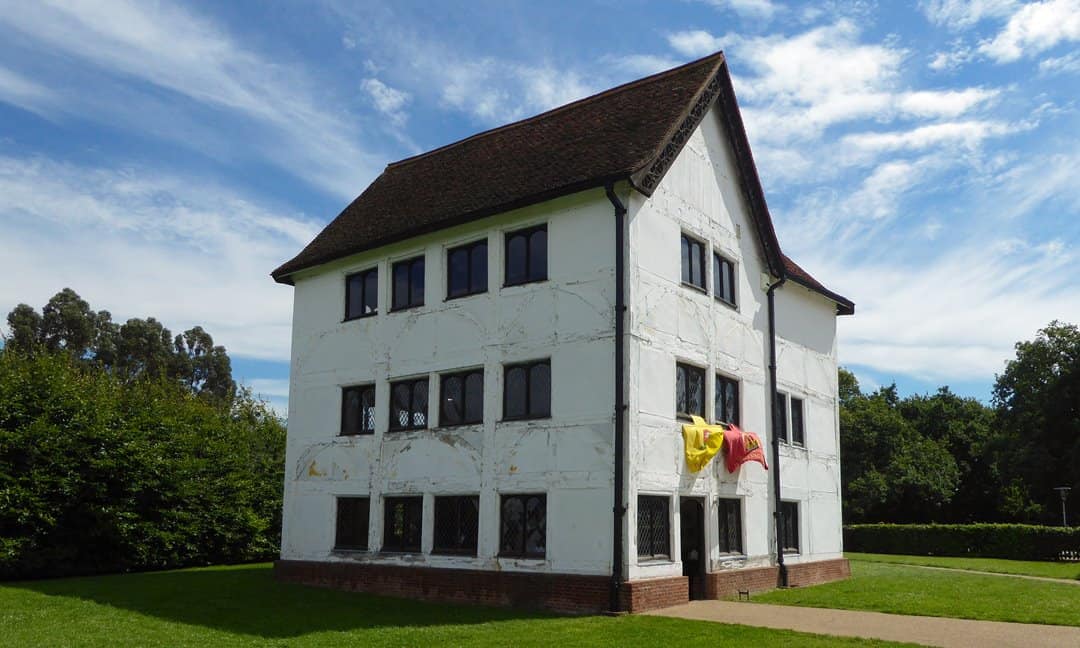 Our first port of call was Queen Elizabeth’s Hunting Lodge, perched on a promontory facing the forest. Despite its name, this Tudor building was neither a hunting lodge nor the creation of Queen Elizabeth I (or for that matter, Elizabeth II). Rather, it belonged to one of the most infamous monarchs in English history, King Henry VIII, famous for his six wives and the dissolution of the monasteries. Although now converted into an enclosed building, the original timber-framed structure was a largely open air hunting standing. It provided a platform from which Henry – in his later years famously overweight and increasingly infirm – could launch arrows at passing deer. The deer themselves were residents of the forest and had been driven to their death by local people eager to please the king.

The building is free to enter and we explored it at our own leisure. Three storeys of the standing are open to visitors, each decked out with props and children’s activities alluding to its Tudor heritage. Of particular interest for me were the apotropaic markings engraved in some of the timbers around the fireplace, a reminder that witches and malevolent spirits (perhaps inhabiting the woods themselves?) were a very real threat for the people of Early Modern England.

Having surveyed the forest from the upper floors of the standing, much as Henry VIII would have done, we then moved into the leafy green depths of the wood itself. We kept toward the western edge to reach the small village of High Beach, the only settlement actually located inside Epping Forest. Here stands the Epping Forest Visitor Centre, a fairly meagre affair containing a few basic exhibits about the greenwood and its history. Several books and maps are for sale, and the staff graciously allow visitors to top up their water bottles from the staff kitchen. 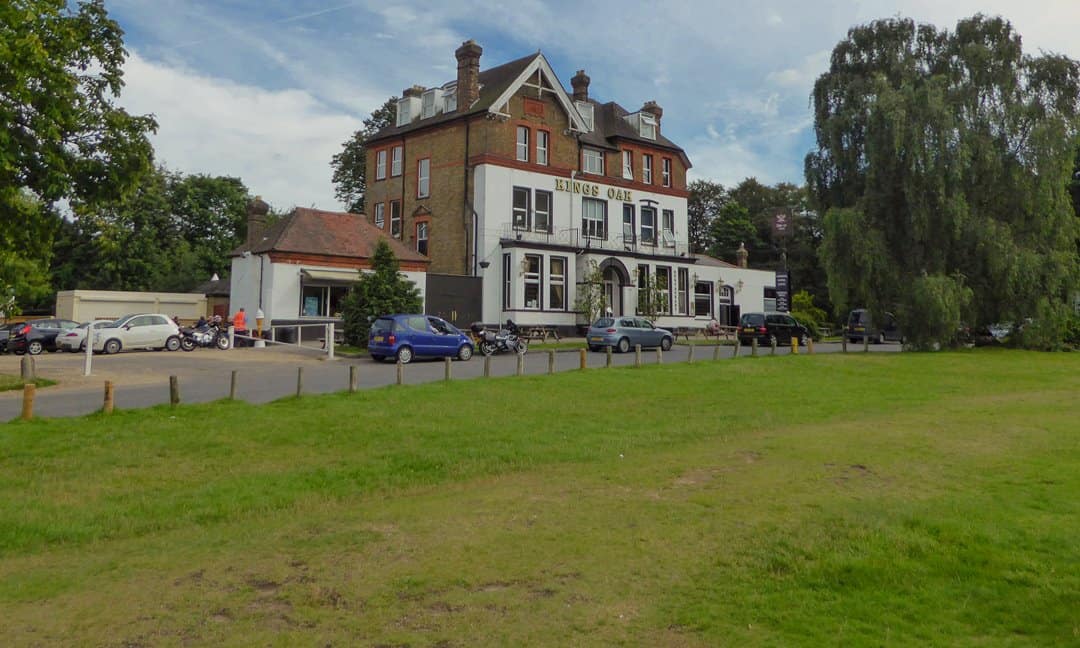 A couple of minutes’ walk from the centre, in front of the King’s Oak pub, is a promontory on which we found twenty small tumuli. Although once mistaken for prehistoric burial mounds, investigation has revealed these to be artificial rabbit warrens constructed in the 16th century. While lacking the romance of the former explanation, these archaeological survivals nevertheless tell us more about the changing uses of the forest throughout history. Indeed, for many people in the past, the woodland was an important resource for food and firewood; as contemporary tourists, we may be among the first to only appreciate the forest for its natural beauty and heritage value.

We also took a quick detour into High Beach’s 19th century, Neo-Gothic Anglican church, Holy Innocents, to visit one of the more unusual graves in its churchyard. A substantial monolith erected in the 1940s to mark the resting place of a local clergyman, the stone contains an epigraph written in runic. It is a quote from the only surviving Old English epic, Beowulf, declaring: “Then at the fated hour Scefing, very brave, passed hence into the Lord’s protection.” A fascinating yet little known manifestation of the romanticist sentiment often expressed for England’s Early Medieval past.

Pushing further into the heart of the forest, we eventually came to the hillfort at Loughton Camp. Hillforts were built across Britain during the Late Bronze Age and subsequent Iron Age; although they are particularly concentrated in modern-day Scotland, there are many across southern and eastern England too. Loughton Camp is one of two prehistoric hillforts encompassed within the contemporary boundaries of Epping Forest, the other being Ambresbury Banks, near the wood’s northern boundary. These have the distinction of perhaps being the most impressive prehistoric sites surviving in the Greater London area. 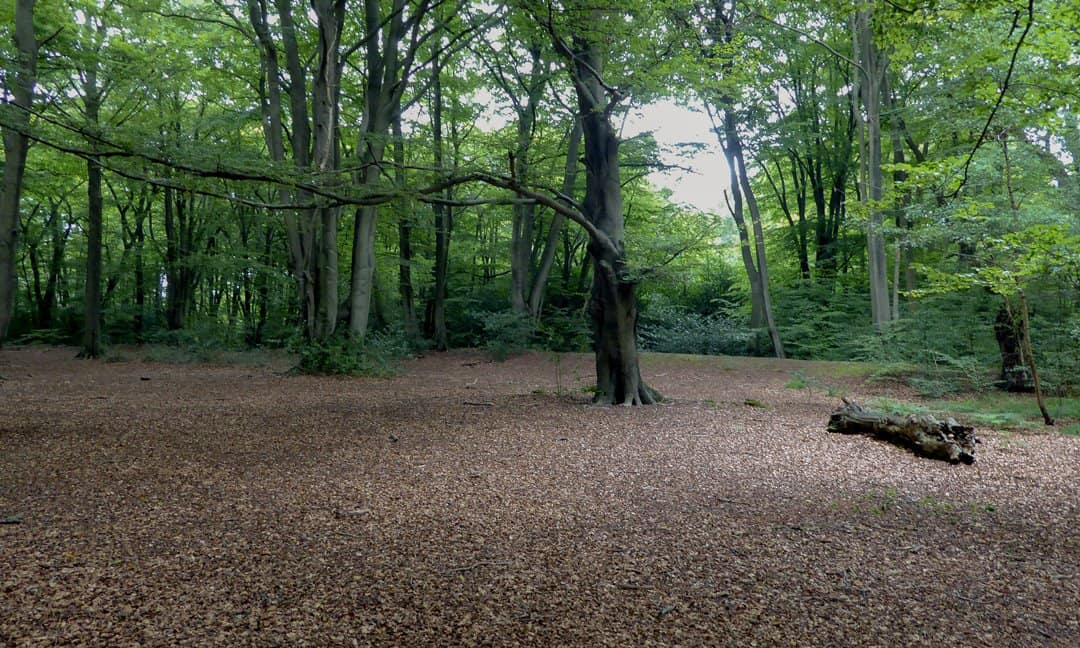 The interior of Loughton Camp is now engulfed by woodland, although much of the encircling bank-and-ditch remains visible.
Photograph © Ethan Doyle White

Although it is likely that many of these hillforts never witnessed military action, their defensive location and design suggest that the society which produced them was becoming increasingly martial in orientation. This perhaps had much to do with growing tensions between neighbouring tribal groups, as communities sought to impose claims over territory or other important resources. In Loughton’s case, it may have been the Trinovantes who built this site to defend themselves from the Catuvellauni. It is also possible that these forts functioned as key sites for trade and inter-group contact; as visually prominent locations in the landscape, they would have been ideal for such a purpose.

Although it is not well signposted, we found the hillfort by following a series of ribbons selectively tied onto trees leading from the miniature bridge over Loughton Brook. As we followed these ribbons and approached the hillfort, it was apparent that the site had changed much from its Iron Age heyday. While the fort would presumably have stood in a large clearing, free from trees, today it lies under the lush green canopy of the forest. Thankfully, brambles and other ground-level foliage are not a problem at Epping and it was quite easy to make out the original ditch-and-bank that once encircled the hillfort.

We approached the site from the south-east, where the ditch-and-bank is not particularly impressive, but as we moved towards the north-west, the bank becomes far more prominent, a reminder of the original scale that the earthworks would have stood at. Two information boards provide a little more information about Loughton Camp and the finds discovered through archaeological excavation. 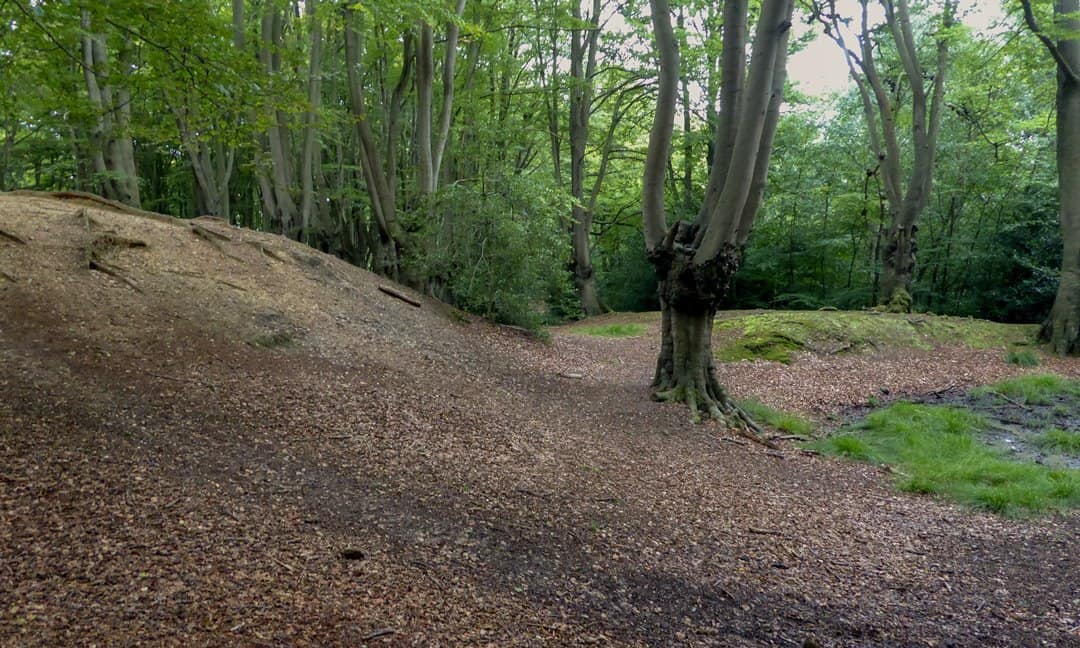 The bank remains quite high along the north-western part of Loughton Camp. Photograph © Ethan Doyle White

In all, we spent approximately six hours traversing the forest, having restricted ourselves to its southern half. Had we devoted the entire day to the endeavour, we could have pushed further north, covering the entire length of the wood and reaching Ambresbury Banks before entering the market town of Epping itself. We also might have left the forest and headed west to the Epping Forest District Museum, housed in a Tudor building at Waltham Abbey. Nevertheless, even a whole daytrip would probably prove insufficient to experience the entire wealth of Epping Forest’s heritage. This is a place that requires repeated visits, particularly in different seasons, to gain a fuller appreciation of its natural and historic value.

However, day trippers seeking a morning or afternoon’s escape from the hustle and bustle of London will find Epping Forest more than adequate for their needs. Easily accessible via public transport, it is only a brief train ride away from central London. Although hiking boots are not strictly necessary, firm footwear is a good idea, particularly for some of the steeper paths. Water and snacks are recommended, as is a map (Map of Epping Forest on the City of London Website), given the general lack of decent signposting within the forest itself. While this is an area that definitely requires a level of preparation and dedication, as well as a certain level of physical fitness, it represents an affordable and enjoyable day or half-day for intrepid heritage explorers, offering some of the few archaeological sites of this calibre so close to London.