The small coastal town of Topsham, just outside Exeter, was recently found to be the site of a Roman legionary fortress. This was likely connected to the fortress of Isca at Exeter by the Roman road now known as Topsham Road. Defence-ditches uncovered in recent excavations date Topsham’s fort to an occupation between AD 50 and AD 75, but Mesolithic and Neolithic archaeological finds suggest a much earlier origin for the town. Topsham has likely been used as a port since the Roman period, however in the late 13th Century, the Courtenay family built a weir to dam the River Exe (Countess Weir) in order to run their mills. In doing so, this meant that ships could no longer reach Exeter and had to load and unload at Topsham, giving the small town a greater purpose as a prosperous port. In 1300 Hugh de Courtenay was granted the Manor of Topsham, and transformed the small market village into a town with market days and local festivals. 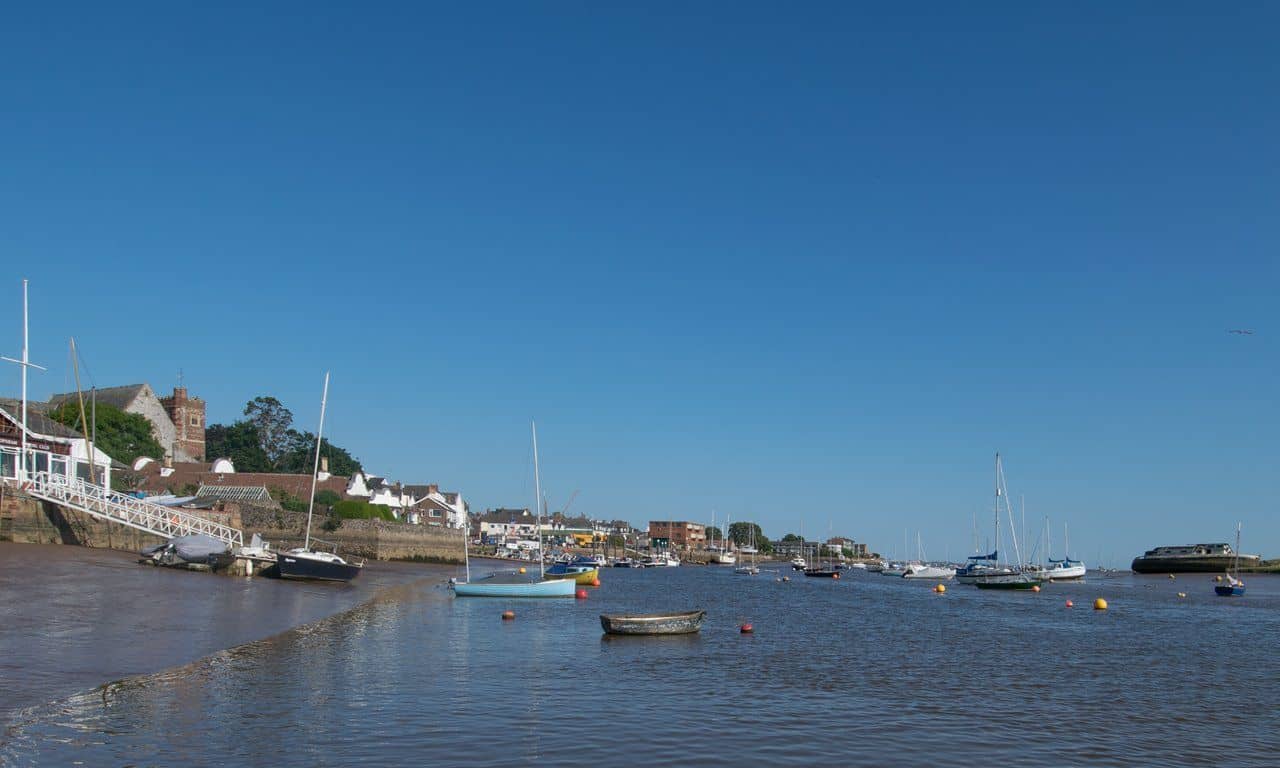 During the 16th Century a shallow canal was cut to connect the Exe estuary with Exeter’s own port, however, with time, this silted up and cut-off Exeter once again. Topsham continued to thrive, trading with merchants in Newfoundland and France, and fitting-out ships for the Spanish Armada. By the 17th Century, Topsham was a crucial base of the English cloth trade making many of the town’s merchants very wealthy. These traders invested their money in building the unique Dutch-gabled town houses seen along The Strand, overlooking the quay, before they could store their wealth in banks. In fact, in 1688, Topsham was used as the port to land William of Orange’s ammunition and gold when he landed in England to become king.

Trade and ship-building continued until the 19th Century when the railway was built to Exeter. Eventually a branch of this reached Topsham and Exmouth, at the Exe estuary, bringing holiday-makers from the city to the coast. During WWII, Topsham was less badly affected than Exeter, with only one bomb falling on the town. However, many local children were evacuated and the small town pulled together to great effect during the times of crisis.

For such a small town, Topsham has had some rather influential residents. During the mid-20th Century, the town was visited by Gone With the Wind actress Vivian Leigh who married local man Leigh Holman. After this marriage broke down, Vivian Leigh embarked on a whirlwind romance with the actor Laurence Olivier, moving in with him despite Holman’s denying her a divorce. Some of her memorabilia has been on display in the Topsham museum.

Today, Topsham is a vibrant and Quintessentially-English coastal town located just a short journey from Exeter city centre with excellent preservation of its heritage as a once major shipping port. The town makes for an excellent day out from the hustle and bustle of the city, and good train links to and from Exeter mean Topsham is only a 15-minute journey away, priced at around £3 for an adult return. It is worth checking return train times to Exeter before your visit, since they are often infrequent and can be busy on weekends. Alternatively driving to Topsham also takes only 15 minutes, but parking can be difficult in Topsham town centre. Car parks along the high street and at the quay charge around £1/hour and some are free on Sundays or after 6pm on weekdays. Buses also run to the quayside so it is worth checking local routes and times for more information.

I would definitely recommend taking the train for ease and because of the central location of Topsham train station, the walk into town is suitable for all, including disabled people and young children. Alighting from the train, cross the level-crossing and walk straight until reaching the high-street. Take a left to find the majority of the local shops, cafes and galleries. Some of my personal favourites are the ‘Rhombus and Pineapple’ card shop, whose witty phrases and unique designs will have you giggling on the street, ‘Country Cheeses’ where you can buy local cheddar, brie and ice cream for surprisingly reasonable prices and the second-hand book store selling everything from travel guides to sheet music manuscripts.

Also not to be missed along the high street is St. Nicholas Methodist Church. With unique architecture and a pebbled façade resonant of its seaside location, the church has stood in the same position for over 150 years. A little further down the high street is St. Margaret’s Parish Church. Following a little path along the side of the church, through the churchyard, reveals a spectacular viewpoint over the quay and River Exe. Descending here allows speedy access to the quayside, but the steep steps might prove a challenge for some, especially in adverse weather. Alternatively, continue along the high street down the winding road to reach the quayside. 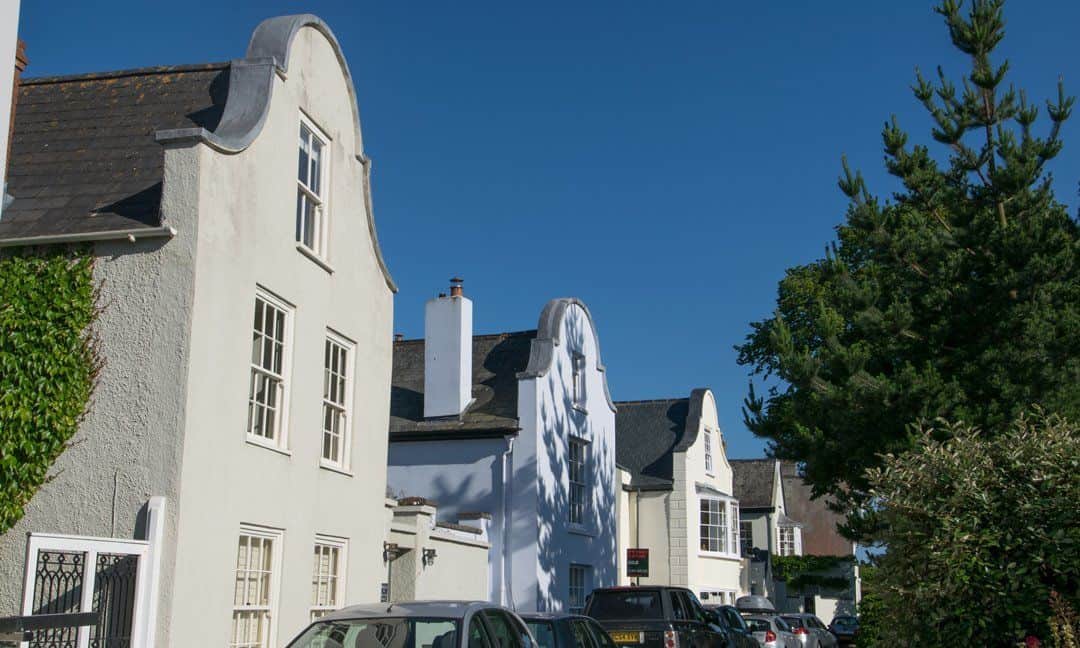 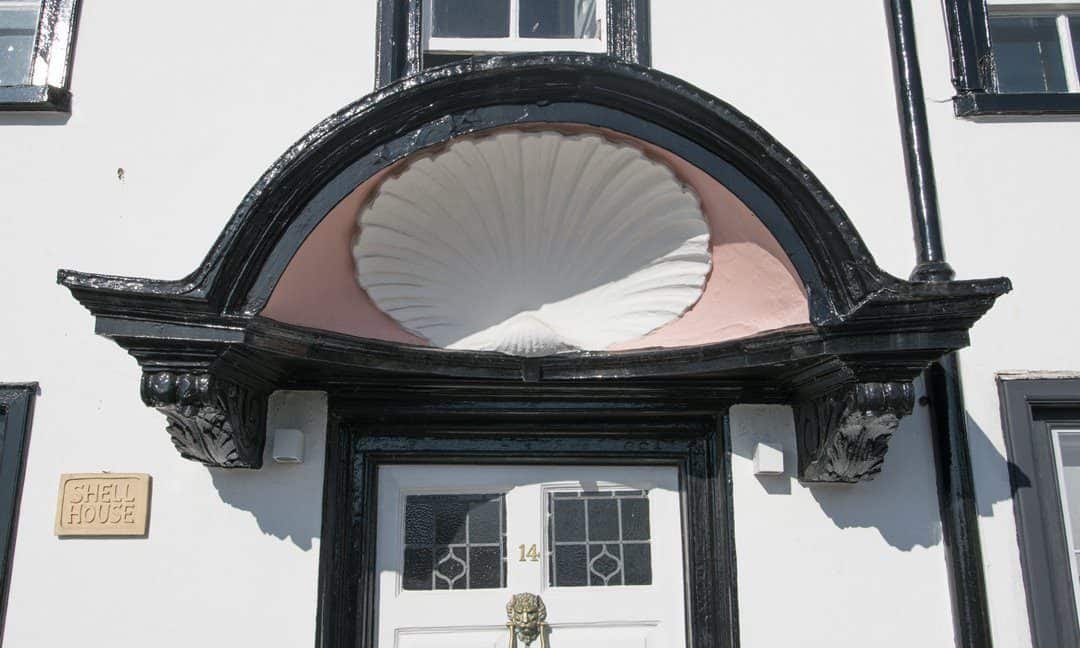 Many of the buildings at the quay have been up-cycled from Topsham’s shipping past into places to eat and galleries. Topsham Quay Antiques Centre, situated centrally on the quayside, boasts 3 floors of antiques from home and abroad from over 65 sellers. Personally, I love rummaging through the old books and jewellery; this is a great way to while away some time if the weather turns rainy. Outside the Antiques Centre you can go crabbing and there is some good information about how Topsham relates the rest of the River Exe, displayed on a notice board. The quay is well sign-posted, which means it is not difficult to find The Strand, the road upon which the local museum and the famous merchants houses are located. Wandering down The Strand, notice the brightly-coloured houses seen in most English seaside towns, and note in particular ‘Shell Cottage’, one example with a large, white, plaster shell embedded in its porch. The Dutch-gabled townhouses are further along the road, towards the end, where you can also admire some larger, regency-style homes. 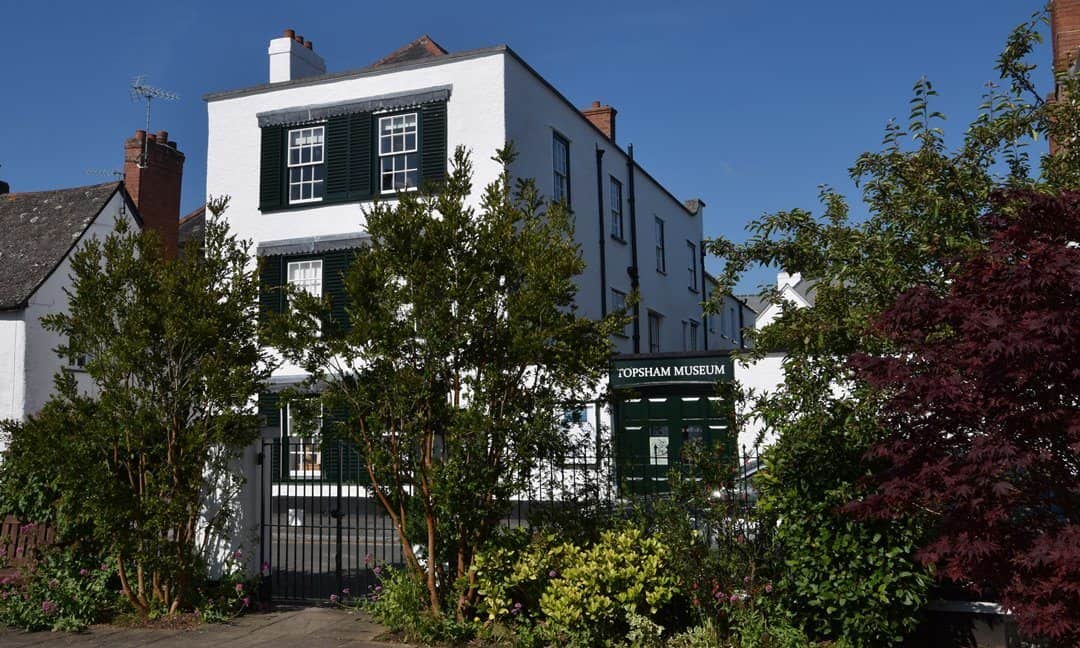 Topsham museum is found in one of these Dutch-gabled style houses, it’s hard to miss, given its large sign and open entrance, however its opening hours are limited (open 1st April-30th October 2pm-5pm Saturdays, Sundays, Mondays, Wednesday and Thursdays, plus Tuesdays in August. Last entry 4.30pm, more details: Official Website, their Facebook Page). This museum is one of the best local museums I’ve been to, not only because of its well-considered exhibits, including a recreation of the interior of the attached 17th Century merchant’s house, with authentic furniture, textile designs and clear information about the Topsham shipping industry, but also because of its use of outdoor space. The room guides are very helpful, without being over-informative, and are happy to leave you to your visit. Unfortunately, only the lower floor exhibits and the upper Sail Room are wheelchair friendly, the 17th Century house remains inaccessible. The museum’s café is run by friendly staff, with reasonably-priced cakes and teas (Cream Tea £4) and the café and Riverside gardens are a lovely way to enjoy views of the quay on a sunny day. Along The Strand are many small side roads reaching out onto The Goat Walk, a stretch of path next to the water with plenty of benches and viewpoints. 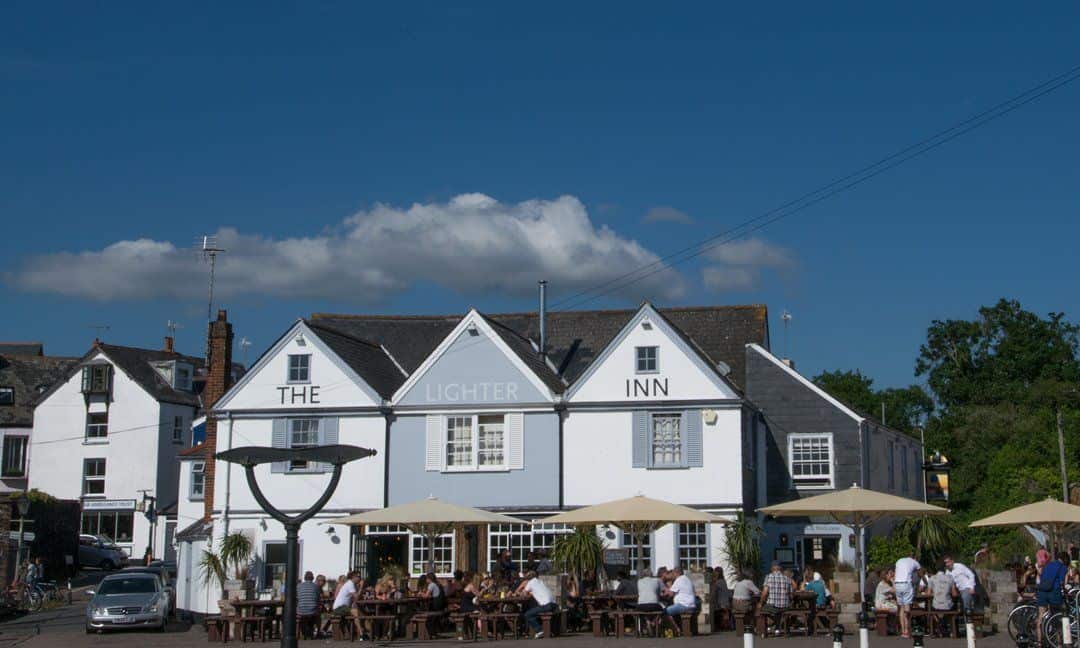 Finding a good place to eat can often be difficult in small towns, but in Topsham, plenty of local cafes and restaurants offer excellent dishes, cakes and coffees no day out would be complete without. For lunches I would recommend The Lighter Inn on the quay. The pub is reasonably-priced, has a dog-friendly garden and serves local beers which can be enjoyed overlooking the quay. For a more formal affair, The Galley is an upmarket fish restaurant serving the catch-of-the-day and other local produce. Stopping for a coffee, The Café on the high-street has an excellent selection of home-made cakes (around £2.50) and artisan coffee. Although service can be slow, the atmosphere more than makes up for this. Alternatively, the Salutation Inn serves a delightful afternoon tea in its Glass House, from £9 a head.

Generally, wheelchair access is good around the town, although pavements can be narrow in places. Children will enjoy exploring the small side roads and the museum, although I would advise against taking them into the Antiques Centre since some of the items are easily knocked off their shelves. From May to September on Wednesday and Saturday afternoons, the Topsham Society hosts free Topsham History Walks (no booking is required, simply meet at 14.00 at the notice board in the Holman Way Car Park). The enthusiastic guides not only know the history of the town, they also have wonderful anecdotes about the lives lived going back centuries. For contact details see the Facebook Page. Topsham is an excellent day trip from Exeter, and is highly recommended as a site of historical interest for visitors to Exeter and east Devon. 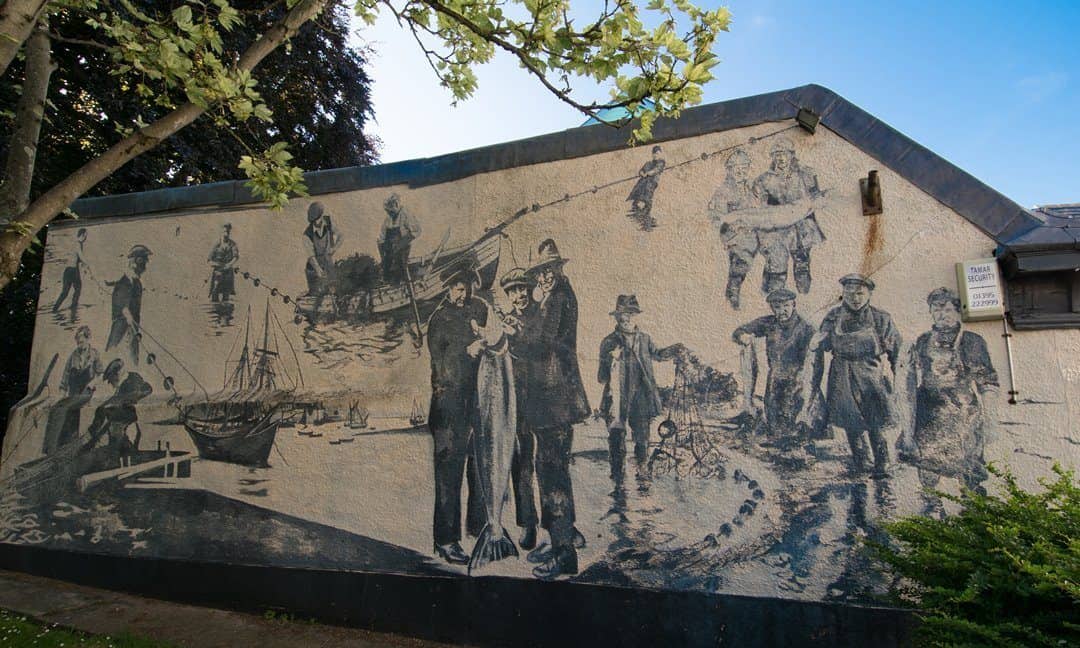 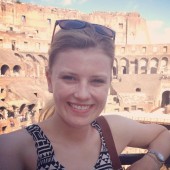 I am a graduate from the University of Exeter having studied Archaeology with Forensic Science over the last three years. In my spare time I enjoy visiting archaeological and historical sties and sharing my experiences with my family and friends, and now with the wider community of Archaeology Travel. My particular area of interest is in the Southeast of England; Suffolk, Essex and Cambridgeshire, where I enjoy exploring my family's past.