This Grade I listed timber-framed building in the centre of the village of Lavenham in Suffolk, has a long and rich history. Originally one of four guildhalls in this once prosperous village, the building was subsequently used as a bridewell and poorhouse, before being acquired by the National Trust in the 1950s. 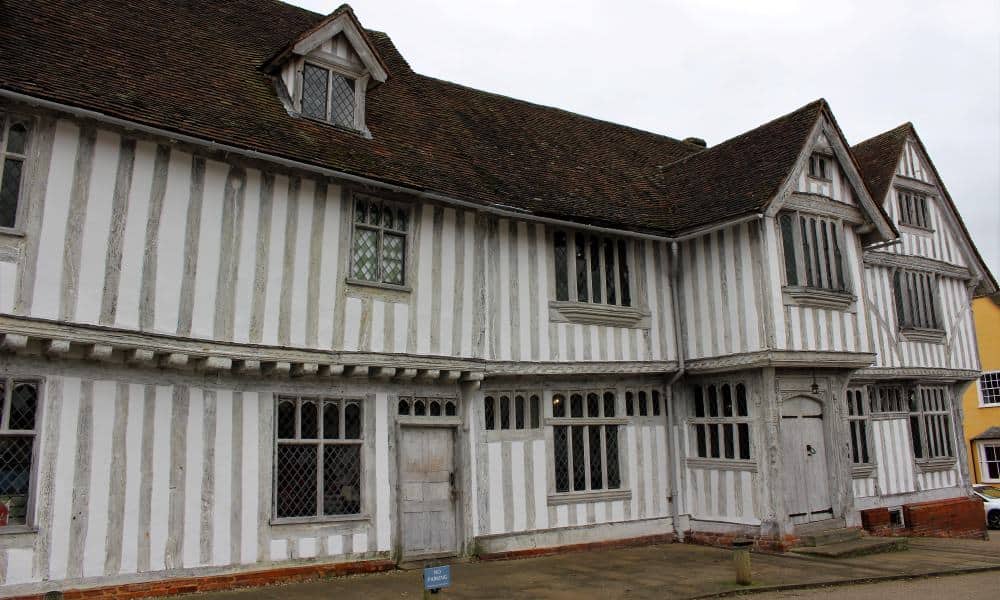 The Guildhall of Corpus Christi in Lavenham is nearly 500 years old and is a wonderful example of a Medieval timber framed building.

The village of Lavenham in the east of England has been occupied for centuries, dating back to before the Norman invasion. The village made its mark in the Middle Ages. Granted a market charter in 1257 by Henry III, which stimulated the local economy, Lavenham soon became a focal point for traders in the thriving wool trade. By the 1390s, the export of woollen cloth overtook that of wool, particularly a blue broadcloth known as Lavenham Blue, which was dyed with woad and exported as far afield as North Africa and Russia. The town became one of the richest in the UK and its prosperity was reflected in the magnificent Medieval buildings which were built by the wealthy merchant families. 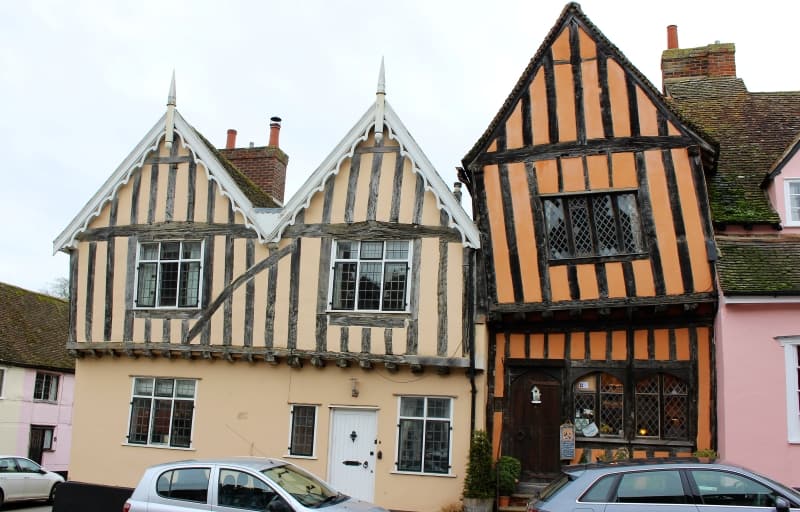 The village of Lavenham is filled with quirly and colourful Medieval buildings.

The Guildhall of Corpus Christi was built in 1529, one of four guildhalls built in the village. A magnificent timber framed building with plaster infill, it is one of the best examples of a half timbered building in the country. Used for meetings by members of the guild to regulate the wool trade, they had a set of rules and principles as well as a strict hierarchy, which established a strong reputation as well as giving them huge wealth and power. By the late 16th century however, the arrival of Dutch immigrants in nearby Colchester, who began to weave a cheaper, lighter and more fashionable cloth, meant that the fortunes of Lavenham began to reverse.

The Guildhall went through a series of different uses, including bridewell, pub, workhouse, almshouse, grain stores, and British Restaurant, until it was given to the National Trust in 1951, who still look after it today, as a museum and exhibition space for visitors. 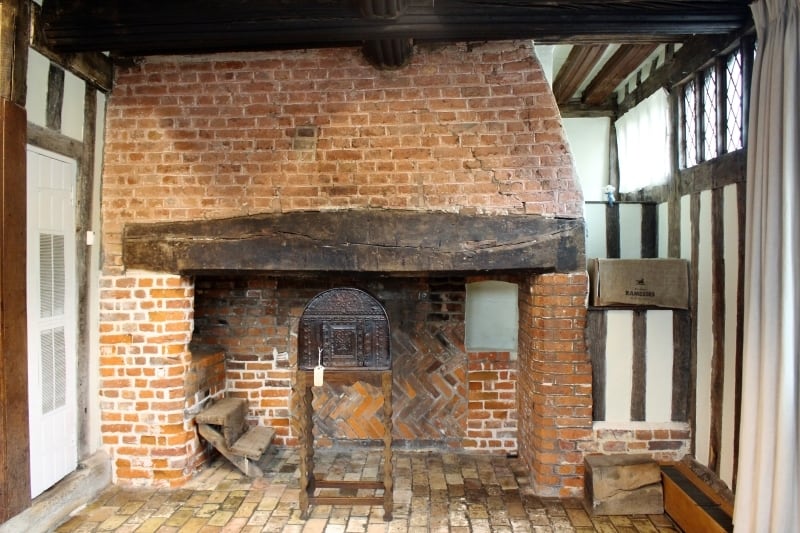 This impressive Medieval fireplace has had a few repairs over the centuries.

The National Trust has quite a job on their hands to reflect every incarnation of this magnificent building throughout its nearly 500 year history. The visit starts on the ground floor where the interior of the building is exactly as you would expect having seen the outside, and it is a joy to see. Timber framed walls and ceilings, wooden floorboards, huge brick fireplaces and narrow windows with diamond paned leaded glass windows are complemented with some heavy dark furniture, although the room is kept mainly empty so that there is little to detract from the beautiful fabric of the building. 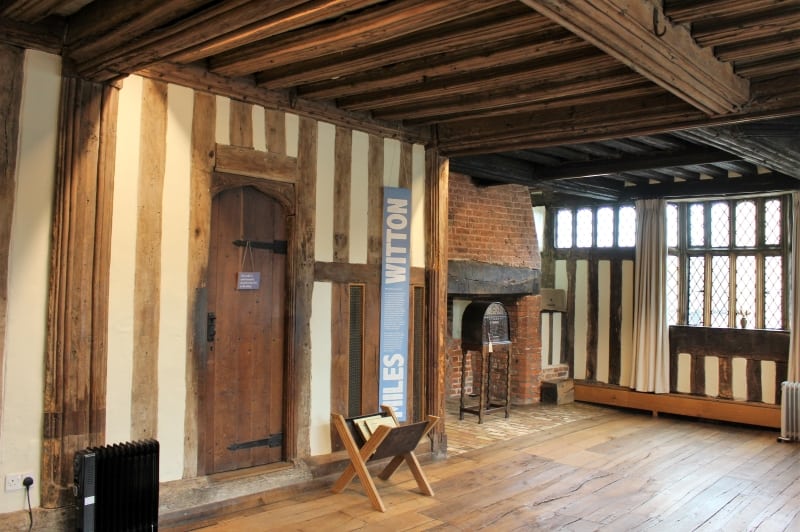 The room is kept relatively empty so that visitors can appreciate the building itself.

The focus here is on the wool trade, looking at individuals in the village who made their fortunes from it. One is Miles Witton who was a cloth maker and member of the guild when it was at its height and ranked 15th amongst England’s wealthiest towns, paying more in tax than the much larger towns of Lincoln and York. The Suffolk cloth trade is described as the best example in English history of mass participation in a manufacturing industry where men of all backgrounds were involved in the industry, from dyers, weavers, spinners, fullers, drapers, cloth makers and merchants. Miles Witton was a contemporary of Lavenham cloth maker Thomas Spring III, who was the wealthiest commoner in England, which shows just how much wealth was accumulated in the small village.

Mummified cats have been found in the roofs of many buildings over the years as they were believed to ward off evil spirits.

There is plenty to look at for both adults and children, with separate information panels for both, meaning that kids can read about the aspects that interest them more. There are samples of wool to handle and even a mummified cat to look at on a light box hidden underneath a cloth; any macabre sight is always an attraction for kids. Cats have been hidden in the roofs of buildings for well over 400 years, an old folklore custom that was believed to have stopped evil spirits from entering the house. 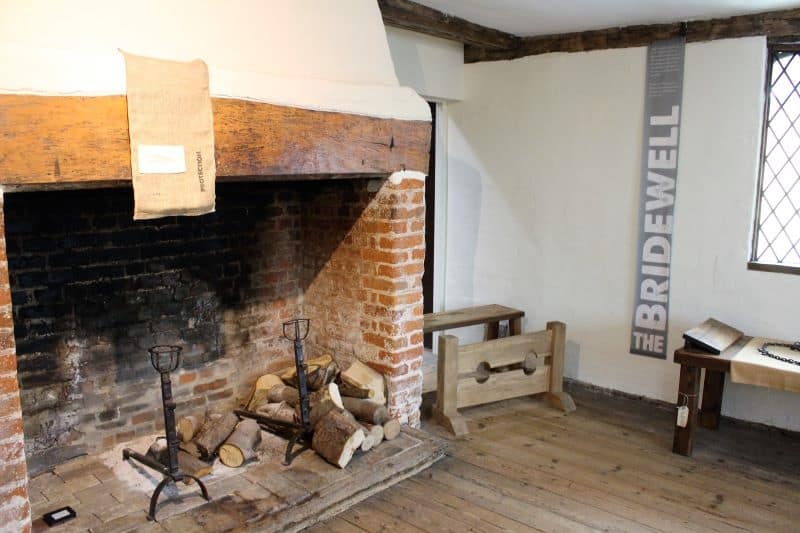 A set of stocks sits in the corner and a hard wooden bed give an indication as to how bad life could be for inmates of the bridewell.

Later rooms look at the building’s role in the 17th and 18th centuries as a bridewell, which is a prison or reform school for petty offenders, imprisoned for minor crimes such as begging or being ‘idle and disorderly’. Bridewells were intended to reform the poor through hard labour and whippings, to make them useful members of society, although that does seem a rather counter productive way to go about it. 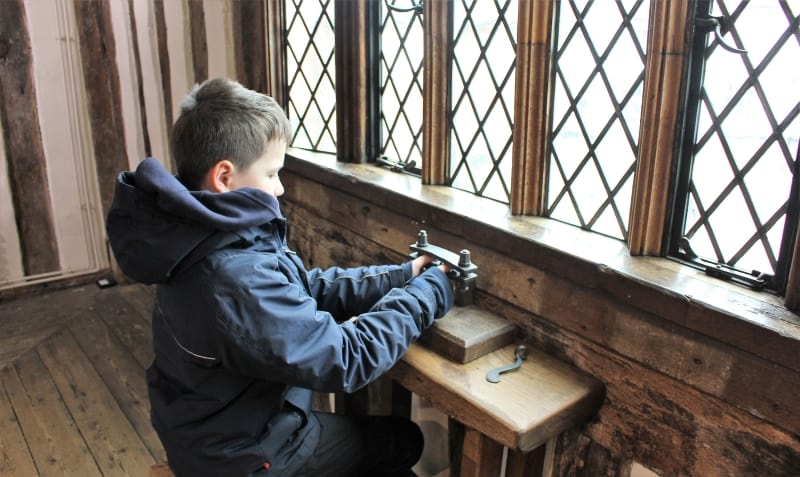 Visitors can try out a set of thumbscrews, although these ones fortunately have a safety attachment.

There is the rather heartbreaking story of an orphan girl, Ann Baker, who was there in 1783 at the age of 12, where they had not enough straw to sleep on, not much water to drink and were not allowed outside in case they escaped. They were whipped until they bled and forced to share rooms with adult men, although the worst offenders were put in thumb screws or leg irons. Some were deported to Australia, spending months on end in chains below decks on crowded ships. Rules are hung on little wooden plaques around the room to show people just how bad life was there, and there are thumb screws and stocks to try out. 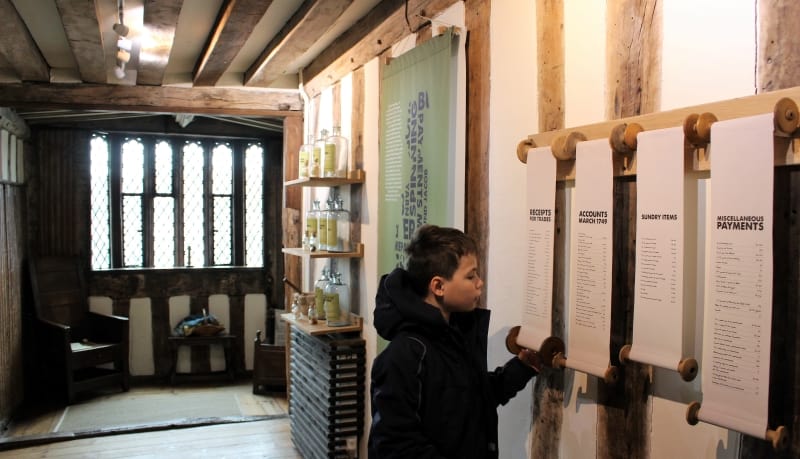 Homemade medicines and financial affairs give an indication of how the workhouse inside the Guildhall was run.

The Guildhall was also used as a workhouse at the same time as it was a bridewell, employing the poverty stricken children and elderly of the area to spin hemp, flax and yarn. The timbered room has a display of spinning wheels and other tools used in the trade and details of the life of Widow Snell who ran it, looking after the 30 residents as well as her own family, keeping everyone fed and clothed. Scrolls hang on the walls to show us her finances, the meals that were served to the poor and the home made medicines which she used to treat them. There are dressing up outfits for children to try on, the rough capes and caps of the poor who lived there. 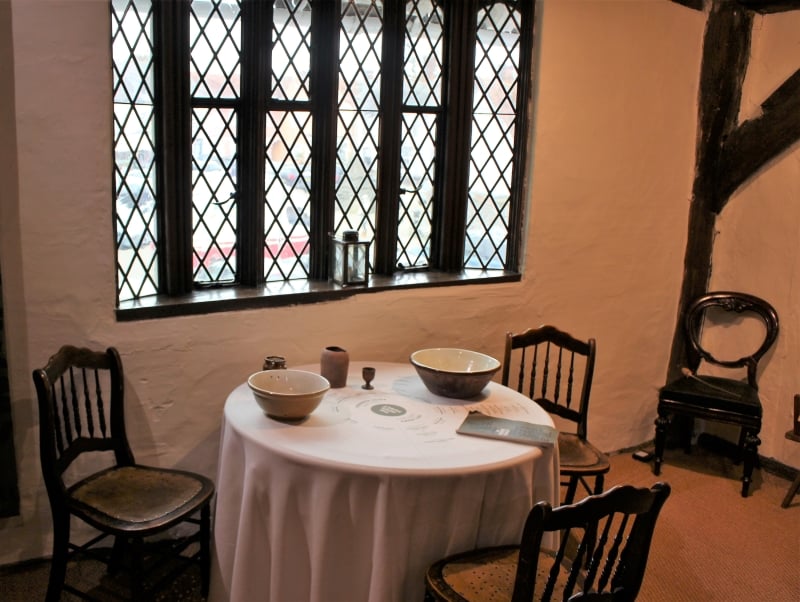 A small area shows how the building was used during World War II when it operated as a British Restaurant, providing cheap meals to the local population.

In the late 1800s, Lavenham was still involved in the cloth trade, although with little of the success of previous centuries, mostly combing and spinning wool for factories in London and Norwich. Life remained a challenge for many of the villagers and the Guildhall was used as an almshouse, not just for the elderly, but for the people who struggled to eke out a living.

During World War II, the Guildhall was used as a British Restaurant. These were set up by the government to sell basic meals at reasonable prices off the ration and were staffed by volunteers of the WVS. After the war, the Guildhall passed into the hands of the National Trust. 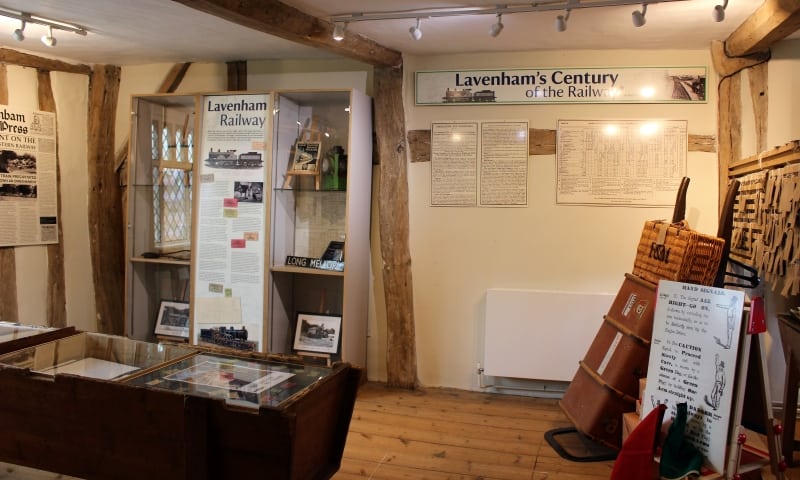 The final part of the building is an exhibition about the Lavenham railway, which had been a station of the Bury St. Edmunds to Long Melford Branch line, but which fell victim to the Beeching cuts in the 1960s. The room is filled with memorabilia from its 100 years of service, including timetables, porters badges, lamps and luggage, as well as information about what is there now, the wildlife which has reclaimed the land. It is possible to do a Lavenham railway walk, but on a freezing cold February day, we weren’t tempted.

There is a small back garden area outside the Guildhall, which contains prison cells and mortuary buildings. These were built in 1833 and were once part of the Guildhall when it was being used as a workhouse. The cells would have been used for the occupants who had transgressed in some way, and the mortuary for those who died on the premises and were awaiting their burial in a paupers grave.

The guildhall is an interesting place to visit, with plenty for both children and adults, but its main charm is in the building itself, which is a truly stunning example of Medieval architecture, both inside and out. The rest of the village is equally impressive as so many Medieval buildings remain, and I can imagine that in the summer months, it must fill up with visitors who come to admire the colourful timber framed buildings, often leaning at awkward angles and which have so much charm.

There is parking in the market square or on nearby streets