William Richard Morris was the hard-working inventor of the Morris motorcar, a car which came to typify ‘Englishness’ and which was the first to sell over a million units in Britain. He started his working life by running a bicycle repair shop in his parents shed, eventually amassing a fortune, most of which he gave away – over £1billion in today’s money. His modest home in the village of Nuffield near Oxford, is the epitome of Arts and Crafts architecture. Now owned by the National Trust, Sarah visited this summer to learn more about this generous but humble man. 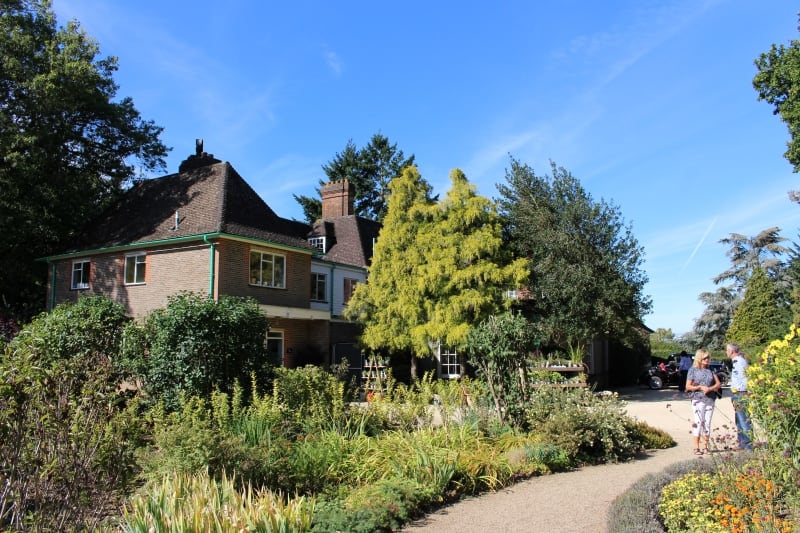 William Morris was born in 1877, the impoverished son of a farmer who had to give up his farm due to asthma. Leaving school at the age of 15, William was apprenticed to a bicycle seller and repairer, in the days when most bicycles were bespoke. When he was 16, his request for a pay rise was turned down, so he left and set up his own cycle repair business from a shed in his parents’ garden, using their sitting room as a showroom.

His business grew and he was soon able to acquire premises in Oxford High Street, where he would make bicycles as well as repair them. He regularly entered cycle races, often winning them at various different distances. He soon turned his attention to motorcycles, and with the business expanding, took on more premises to keep up with the high demand. 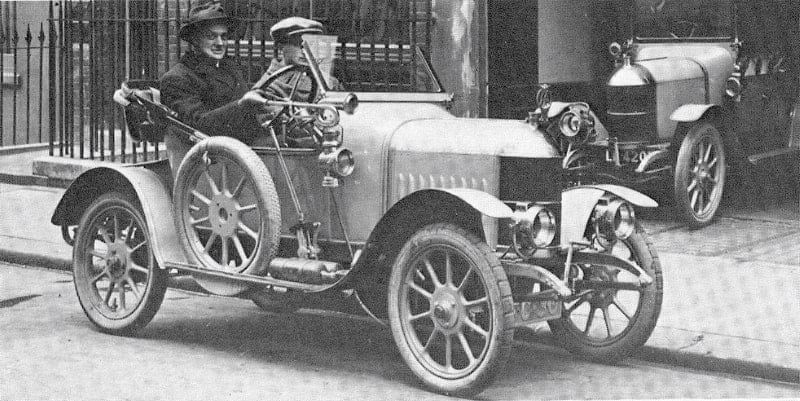 An Oxford two-seater in 1913, being driven by William Morris.

He married in 1903, to Elizabeth Anstey, a seamstress he met who had a shared love of cycling, and to whom he remained married until her death in 1959. They never had children for reasons that are unclear, it being a more discreet time, but he is quoted as saying in the 1950s that he would have given up all of his millions for a child. He was able to throw himself into his work, and was renowned for his work ethic throughout his life. For a 1904 motorcycle show he worked for four days without any sleep. One of his workers described him as, ‘tireless, a Trojan in shirt sleeves, smoking incessantly… the first to arrive in the morning and the last to leave at night.’

By 1912 he had designed his first car, the Morris Oxford, basing it on car parts that he knew to be reliable. He took his drawings to the Motor Show and so impressed the visitors, that he came away with orders for 400 vehicles. In 1913, the first of his cars went on sale for £165. During World War I, his factory switched production to of Mine Sinkers, and Morris was made Ministry of Munitions Controller. He was awarded an OBE in 1917 for his war work.

The famous and ubiquitous Morris logo, once a common sight on the roads of Britain.

After the war, car production resumed in 1919, where he re-launched as Morris Motors. In 1919, he sold 387 cars, and although he was badly affected by the worldwide slump, he lowered his prices and developed new methods of mass production, borrowing ideas from the American factories he had visited. That year, he made £1,500 profit. Just a few years later, he sold 61,000 cars and had made £1,500,000 profit. He invested it all back into the business, buying out suppliers and controlling every part of production. 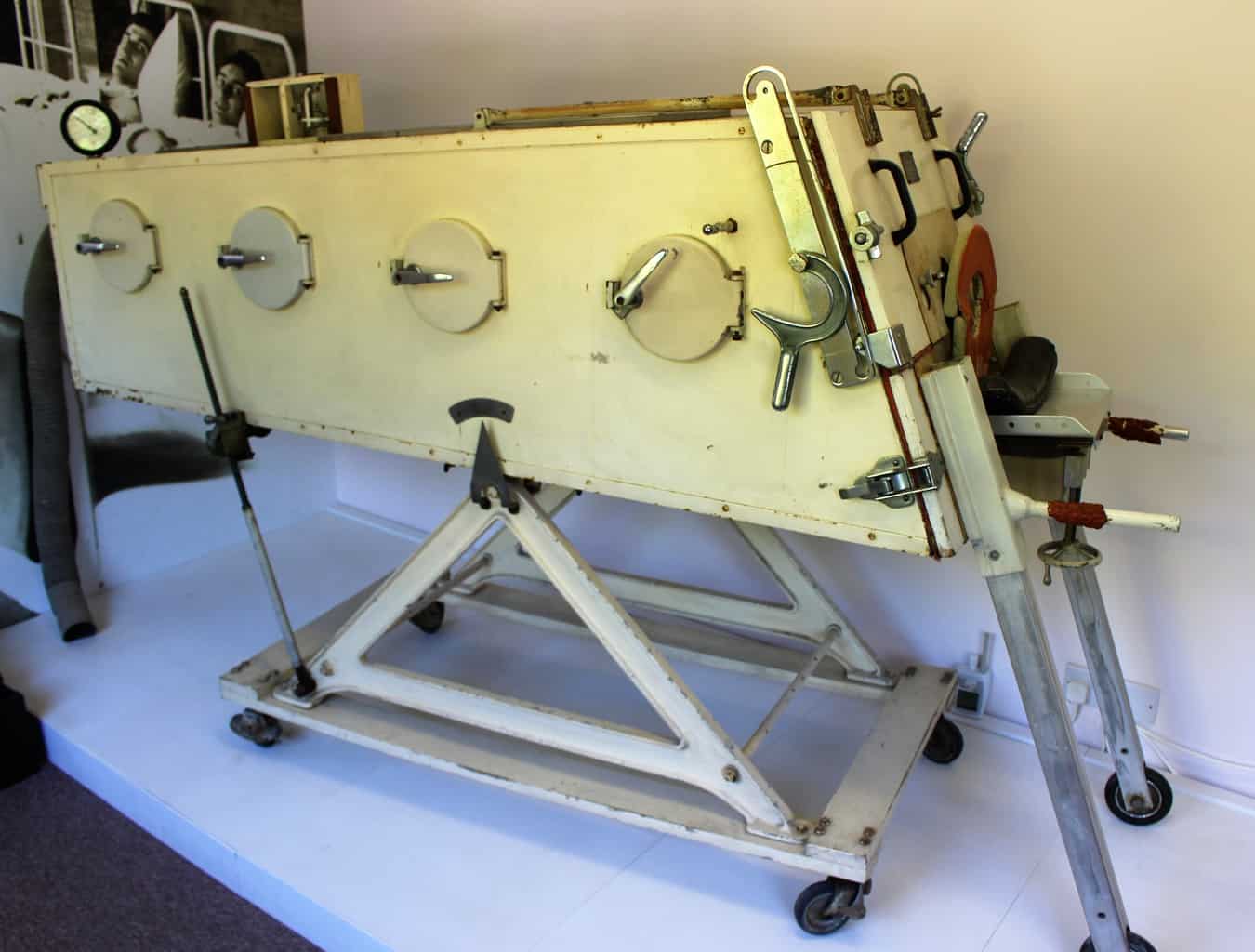 Iron lungs helped polio sufferers to breathe, and saved countless lives. The ones produced by Morris, like this one, had car door handles as their main handles on the sides.

He then decided to give away his fortune, starting with founding a Spanish speaking school in Oxford in 1926. He favoured medical and service charities and in total, gave away about £3 billion, some reports say it was up to £11 billion in today’s money. He gave to the Sea Cadets Corps, set up the Nuffield Foundation to advance education and social welfare, set up the Nuffield College at Oxford, and yet also did not neglect smaller projects, such as during World War II when he bought in wedding dresses and loaned them out to service women when they got married.

He was very keen on the development of anaesthetics and the advancement of health. He famously manufactured the iron lung which helped polio sufferers, and offered a free one to any hospital in the British Empire that needed it. Within no time he was inundated with requests and in total, manufactured and sent out 1,700 iron lungs across the globe.

In 1934, William Morris was made a baronet, Lord Nuffield, for his philanthropy and public services, and in 1938, became a Viscount.

In 1933 he bought Merrow Mount in the village of Nuffield, near Oxford, which had originally been built in 1914 by a shipping magnate for use as a second home. The Morris’ dramatically altered the house, adding on a billiard room and a sun lounge, wood panelling and plumbing amongst other alterations. They renamed it Nuffield Place and lived there for the rest of their lives.

The house is a time-capsule of their lives there, as they changed little after the 1930s. On Lord Nuffield’s death, he passed it to Nuffield College on the understanding that it would remain as he had left it. In 2011, the house passed to the National Trust and the public finally got a chance to visit this house which has been frozen in time. 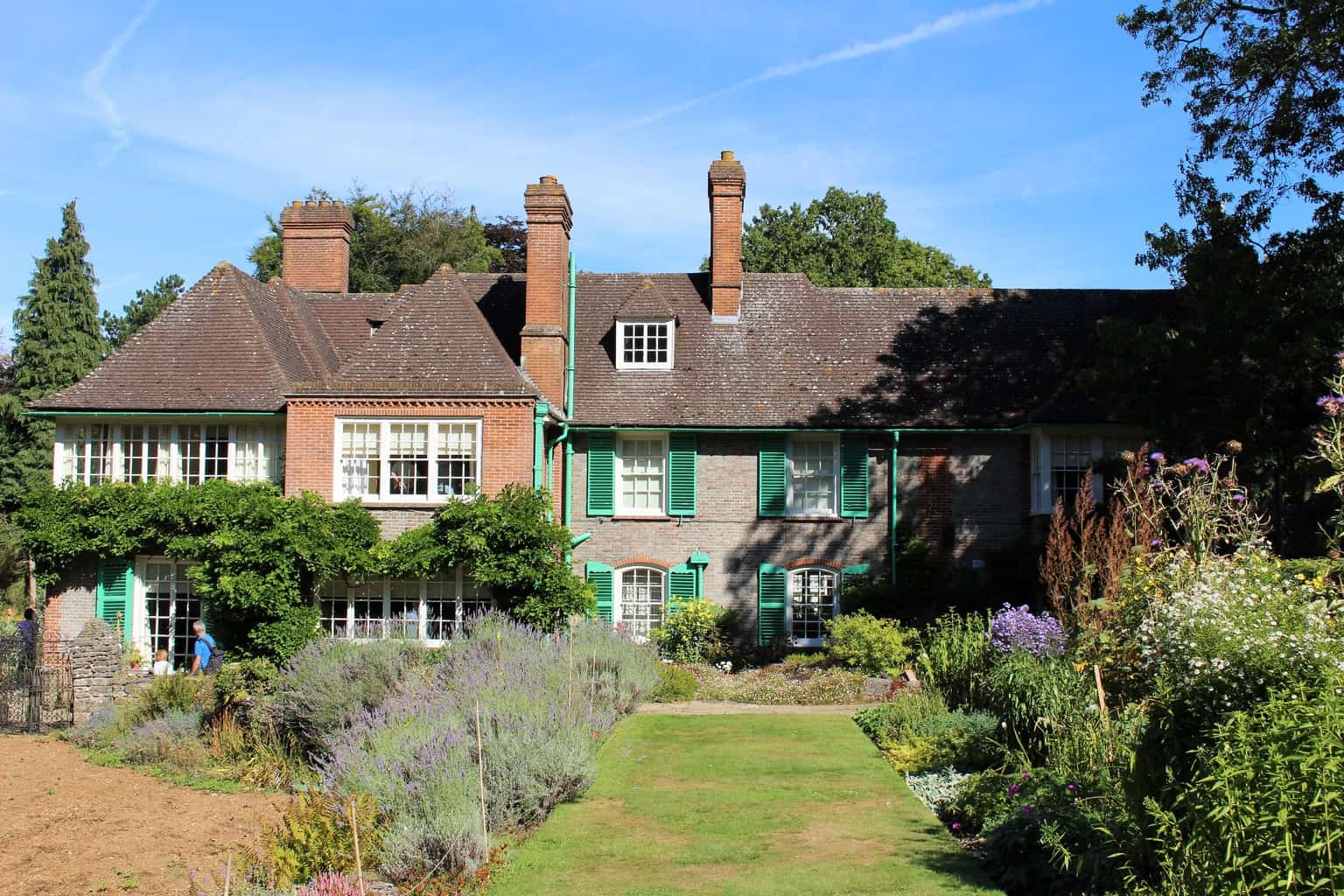 Nuffield Place is a typical Arts and Crafts house, with pretty gardens in the summer.

It is hard not to be impressed by its total lack of pretension. This is a house that they made to suit themselves, and to suit their own lives, rather than for show. Outside, it is a beautiful example of the Arts and Crafts movement, asymmetrical in design, made from a variety of building materials and simple in its construction. Surrounded by modest but pretty gardens and in the depths of peaceful countryside, it is easy to see the appeal of this place for a man who spent so much time working. 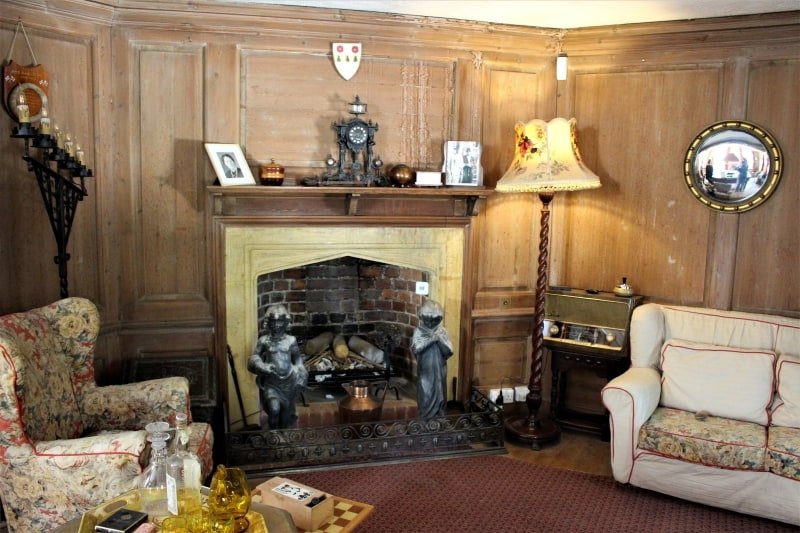 Very much a 1930s man’s room, this end of the billiard room has a fire, decanters and ashtrays.

Inside, the house is comfortable yet simple, and quite quirky. All of the furniture is 20th century reproductions of much older styles. Although they installed plumbing and heated towel rails throughout the house, there are no en-suites, and they continued to use chamber pots. For the visitor, it is walking into a world of yesterday, with household items such as a gramophone, a smart cocktail cabinet, bakelite telephones and the scent of tobacco in the air. Tweed coats still hang on pegs, with battered wooden tennis rackets on the floor. In the wood panelled billiard room, a wingback armchair sits in front of the fire, a wireless nearby, next to a silver tray of sherry filled decanters. 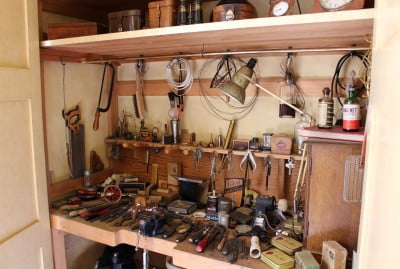 His bedroom is extremely practical and functional, with few adornments and a tool cupboard for those late night repairs.

His bedroom is the best place to see the epitome of the man himself: a room which he had carpeted with scraps from one of his factories, no bed head on his bed and a reading light which he affixed himself, with wires trailing around the room. The best bit however, is his wardrobe. This is where he kept all of his tools and where he would potter in the night when he couldn’t sleep. He would fix things from around the house, even repair shoes, frugal despite being one of the richest men in the UK at the time. 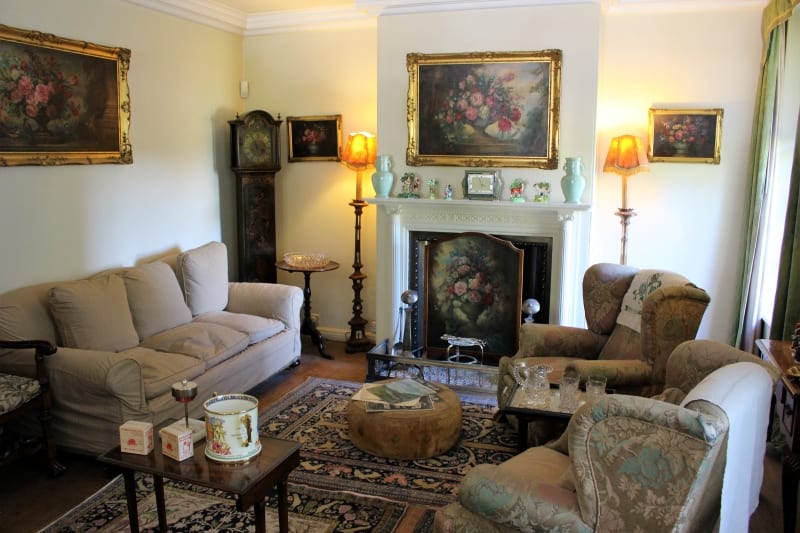 The drawing room is formal yet comfortable and is where Lady Nuffield held her regular tea parties.

Elizabeth would often stay at home while her husband travelled the world, spending much of her time holding coffee mornings and tea parties for her friends, walking her Scotty dogs and gardening. She drove a modest Wolseley, which he gave to her in 1939, and which was the first one to be built in Oxford. It now sits in a garage outside the house. The drawing room was clearly her room, one of tapestried armchairs with antimacassars, dainty coffee tables, cake stands and gilt framed paintings of flowers. 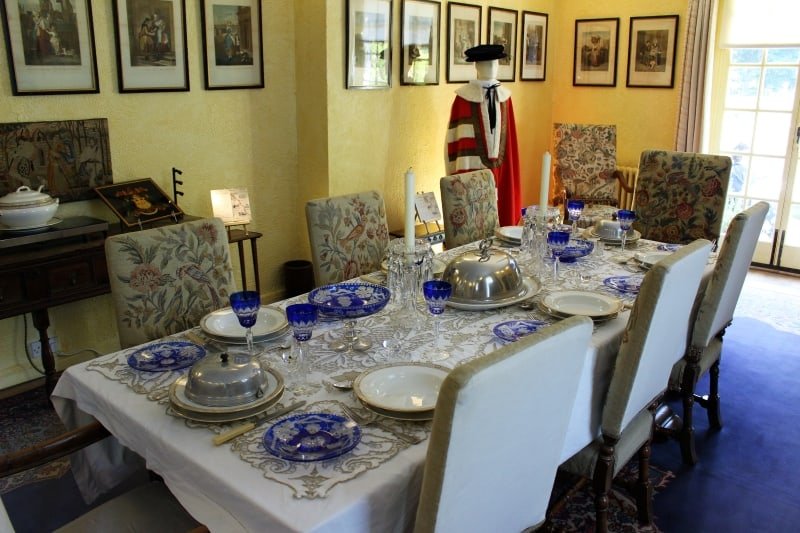 His baronacy robes stand next to the dining table now, but he would not have had them on display himself.

The bedrooms have striped wallpaper, eiderdowns, dark furniture and knick knacks, there is little evidence here of their extreme wealth or importance in British society. The National Trust have put his ermine robes on display in the dining room, where they stand next to a modest table covered in an immaculate blue glass dinner service. There are a few other indicators, such as the scroll which hangs on the landing, from when William was presented the Freedom of the city of Coventry, on 11th December 1936. Unfortunately, this was the day of King Edward’s abdication, and his name has been removed by the calligrapher, replaced with ‘the King, his heirs and successors’ as they did not know at that time who would be the next monarch. 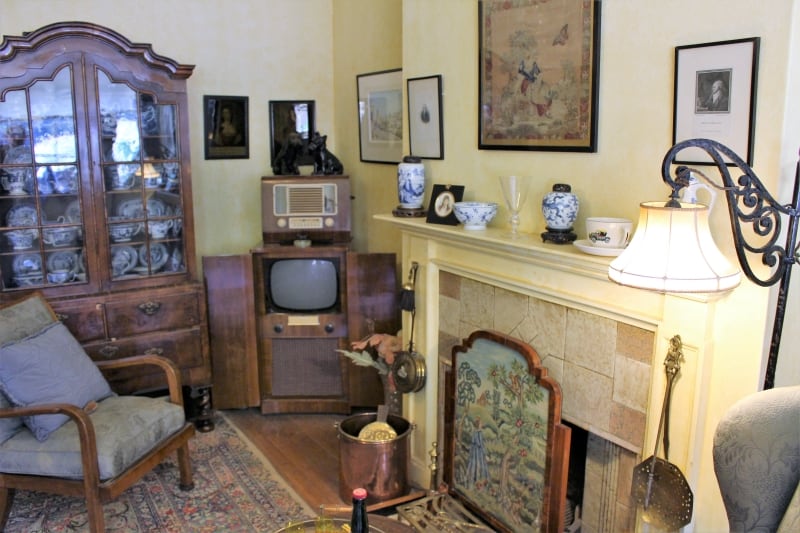 This TV room really does not look as if it belongs to a man of incredible wealth.

William Morris was very keen on health matters, and in the sun lounge, he installed special glass which would allow ‘health rays’ (UV) through the window. This has now been covered by the National Trust, to keep those health rays out! There are a few gadgets that were just coming out in the 1930s – a toaster that only takes one slice, a bakelite television with doors to hide it away, an early Cona glass coffee maker and a food processor. 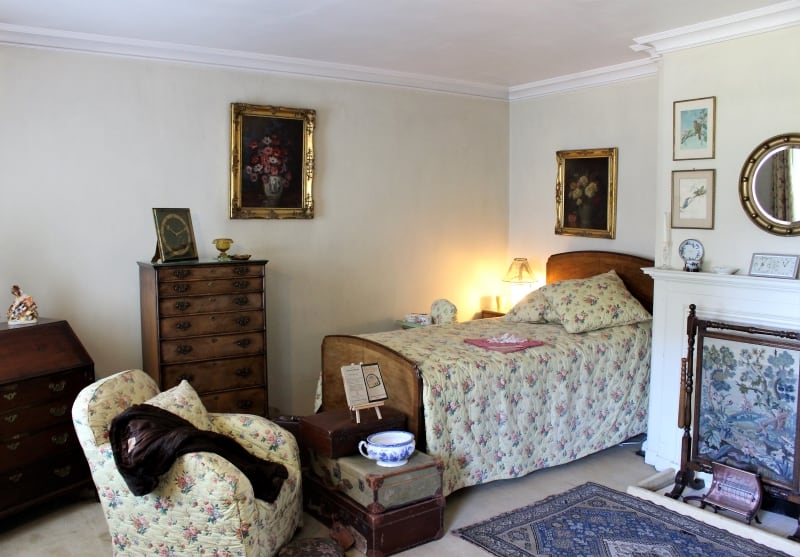 The house is a delight to visit for those who love early 20th century history. It is rare to find one that hasn’t been drastically altered over the years, and that still has its original furnishings, so this is a real find for those like me who revel in seeing time warps which are totally authentic. There is a real atmosphere of peace about the house, although also a sense of loneliness; that maybe Elizabeth was on her own a lot when her husband was away, that maybe she would have loved the house to be filled with the sounds of family rather than tea parties with other genteel ladies of Oxford. Her story seems to be very much untold next to that of her famous husband. 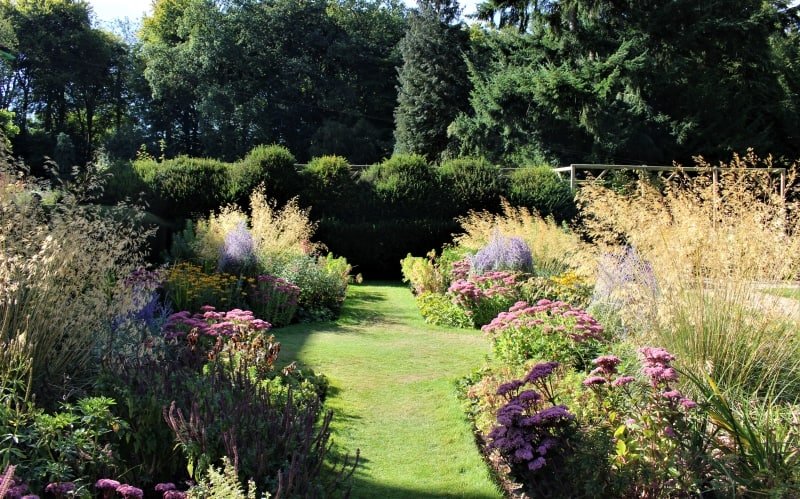 The grounds of the house are lovely, filled with flowers, trees and birds of prey circling overhead. They are not extensive, but they are pretty and a good place for a walk. These days, you can hear traffic coming from the main road nearby, which does take away some of the peace. As the man who brought the motorcar to the masses however, at one time the manufacturer of more than half of the cars on Britain’s roads, he would probably have been quite happy with listening to it. 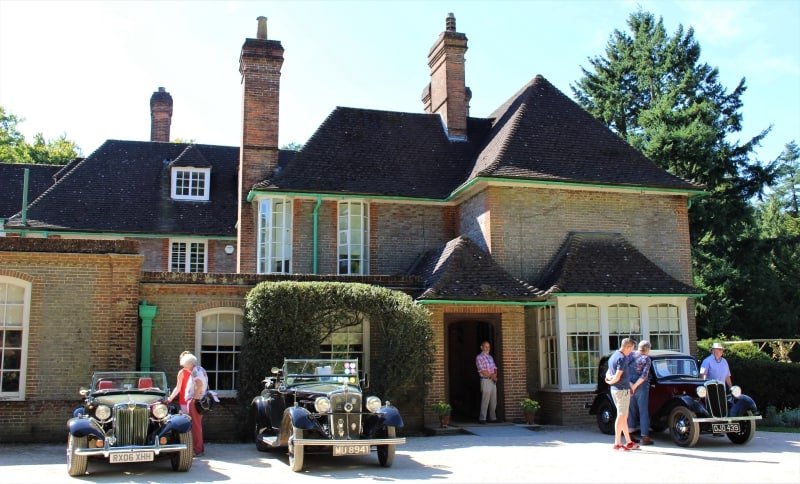 Car clubs often visit the house, and there are usually some vintage Morris’ parked outside the front.

The National Trust offers membership schemes for UK residents and those visiting from abroad, so you can visit any of their properties without worrying about the cost.

For those who would like to see more of his life ‘frozen in time’, the British Motor Museum in Warwickshire has William Morris’ office from the car factory at Crowley, laid out exactly how it was on his last day of work in 1963, with all the original contents. 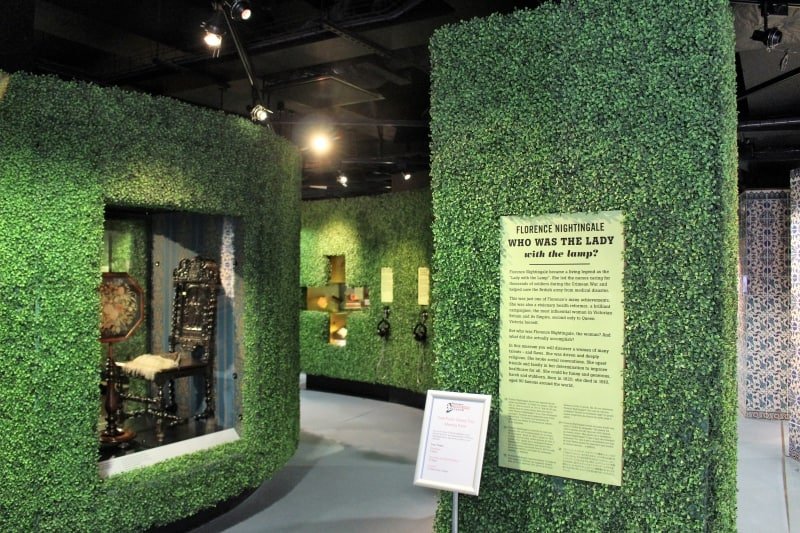 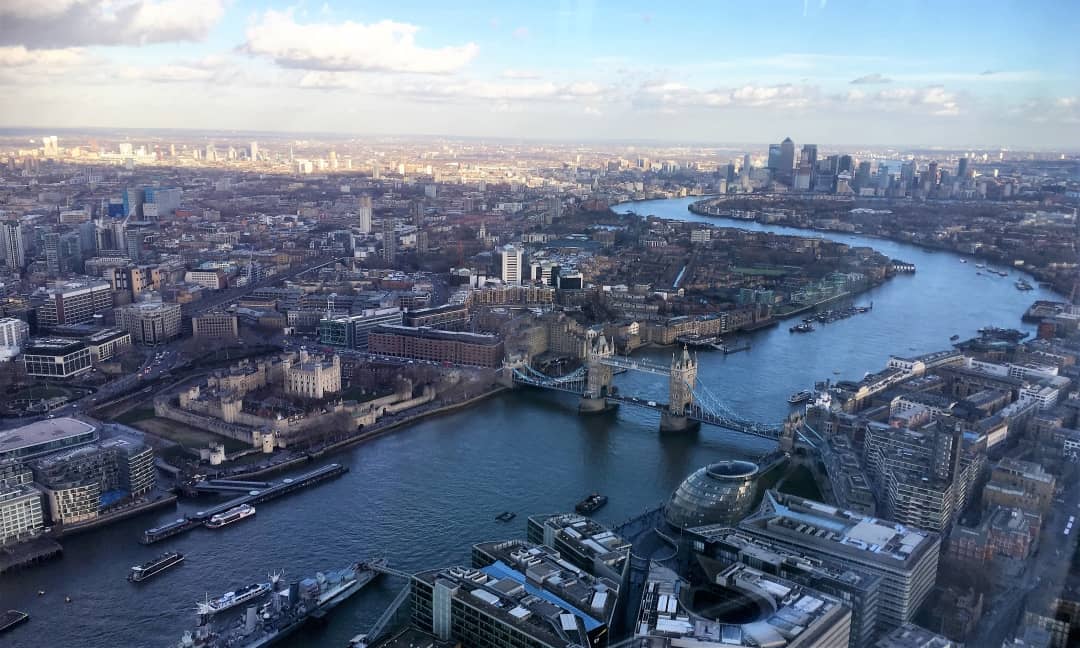 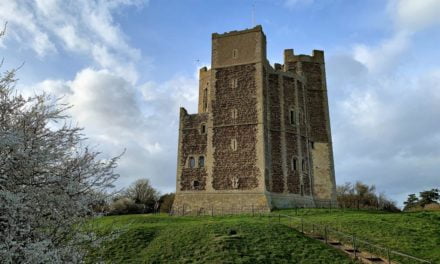 Orford Castle – One of the Most Remarkable Keeps in England 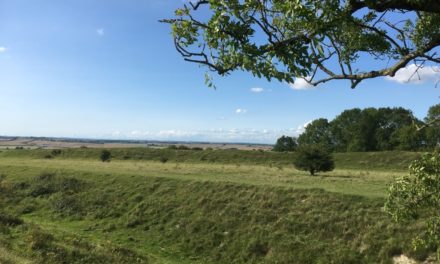 Figsbury Ring: a Prehistoric Site for a Walk in Wildlife