Portuguese Fireplace in the New Forest: the War Memorial to Portuguese Labourers of World War I

Located close to the major ports of Southampton and Portsmouth, the New Forest not surprisingly saw a large military presence and a great deal of change during World War I. There is very little physical evidence left of that time in the forest’s history. Nature has now reclaimed much of it. A few remnants remain. One of these is a lone fireplace, in a clearing in the forest surrounded by trees, ferns and horses. The Portuguese Fireplace, as it is known, stands as a memorial to the Portuguese who helped with the allied war effort during World War I. 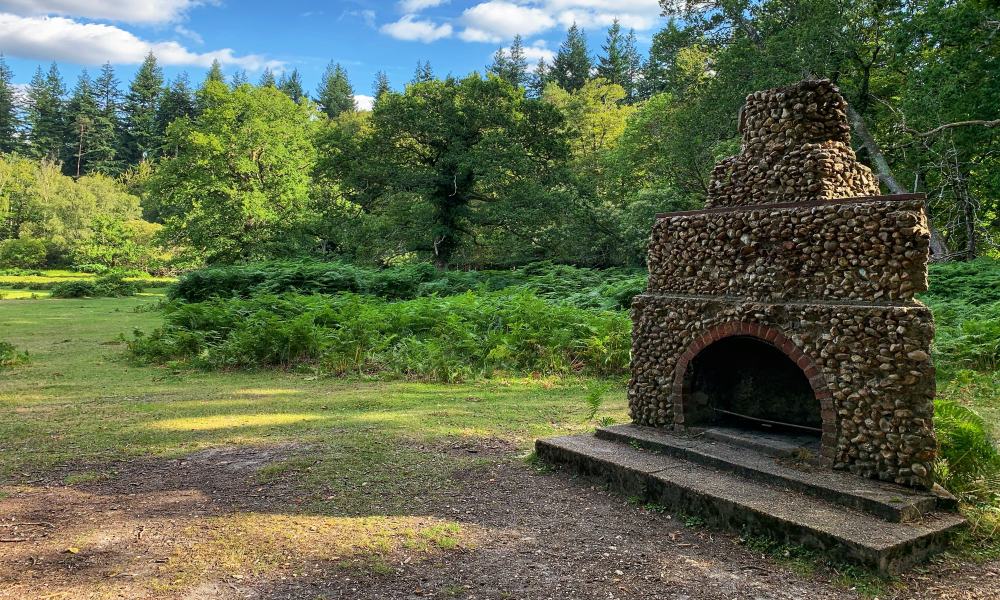 Picturesque against the backdrop of the forest, the war memorial to the Portuguese workers stands isolated in the middle of the New Forest.

The New Forest during World War I

The New Forest played a significant role in World War I. During the 19th century it had been used for military manoeuvers, but with the outbreak of war in 1914 it became far more significant; a location for soldiers to train and stay, for staging posts, airfields for the newly formed Royal Flying Corps, as an embarkation point, Trench Mortar School, War Dog Training School, Bombing School and countless military hospitals.

The ‘Immortal Seventh’, troops from the British Expeditionary Force, were stationed at Lyndhurst at the start of the war. Their soldiers had been recalled from overseas postings and then encamped in the forest, marched around it and put through their paces in replica trenches. In October 1914 they marched the eight miles to Southampton and embarked for France and Belgium, where they went straight into the first Battle of Ypres, with the loss of thousands, dead within weeks of arrival.

The New Forest was also valuable for its industrial output, being used as a major resource. Many of its hardy ponies were drafted into becoming war horses, with few returning. Charcoal production, which had been on the decline, was massively increased and New Forest charcoal was used in the filters of gas masks. The ubiquitous heather was used for packing munitions, and thousands of acorns were collected to produce acetone, a key component of cordite used in shells, of which the British Army and Navy fired 258 million over the course of the war. The other valuable resource was of course timber.

Timber was an essential commodity during the war. Unable to rely on imports, yet with an increased need and a drastically reduced workforce who were now off fighting, the Canadian Timber Corps was swiftly formed and dispatched to the UK from Canada in 1916. With their own equipment and methodology, they swiftly established sawmills and lumber camps and were able to ensure the supply of timber for the war. Timber was needed for pit props for coal mines, whose coal fuelled the warships, and was also used for the construction of the trenches – about 12,000 miles of trenches were built by the Allies alone.

About 2,000 tonnes of lumber was felled in the New Forest during the war, with mainly broadleaved deciduous trees being removed, and replaced with quick growing conifers. By World War II, when timber was again a necessity, much of the pine planted during the first war was felled for the second.

This photo is of the Canadian sawmill at Millyford Bridge during World War I.

The site near Millyford Bridge is now an area of typical forest, with a mixture of trees and open heathland, a meandering stream and an abundance of wildlife. A narrow, little-used road runs through this part of the forest, and all you can hear is bird calls, the harrumphing of ponies and the wind swishing through the trees.

It is hard to believe that just over 100 years ago, this area was a hive of activity, with a Canadian sawmill on the site occupying several acres and surrounded by fences. Inside were assorted buildings which housed sleeping quarters, a canteen, bath houses, a mess, a laundry, hospital, tailors, cobblers and more. A narrow gauge railway ran through the forest to take the timber to and from the sawmill.

As the war progressed, with more Canadian lumberjacks being sent to the front, the UK called on its old ally, Portugal, for help. In 1917, an army unit from Portugal took their places at the sawmill, with a camp being built especially for them nearby. 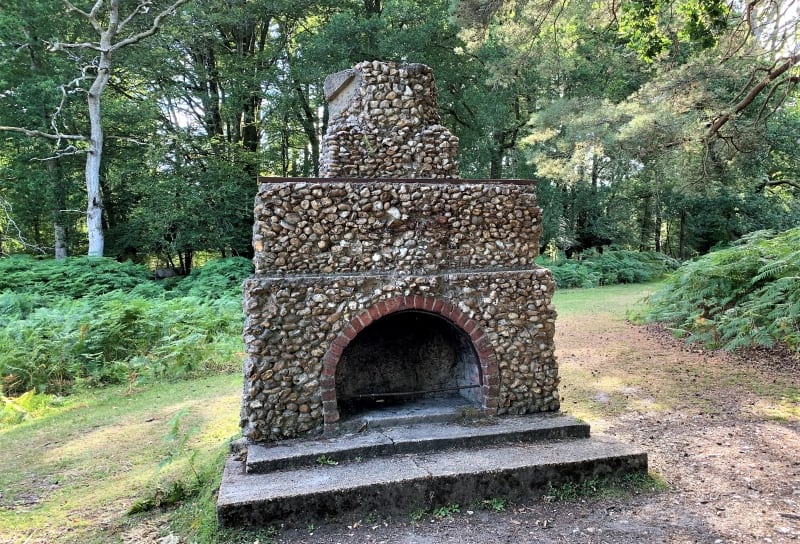 The fireplace was once on a side wall of the cookhouse.

When the war was over, the entire camp was dismantled, except for the stone fireplace which stood in the Portuguese cookhouse. It stands alone amongst the greenery, as the only memorial to the Portuguese who helped with the British war effort.

The land around it bears little trace of what had gone before, just a few raised earthworks covered in a soft moss. A couple of concrete blocks with rusted metal poles are hidden underneath ferns and brambles and are all that is left of the sawmills.

There used to be a plaque next to the fireplace, which said ‘This is the site of a hutted camp occupied by a Portuguese army unit during the First World War. This unit assisted the depleted local labour force in producing timber for the war effort. The Forestry Commission have retained this fireplace from the cookhouse as a memorial to the men who lived and worked here and acknowledge the financial assistance of the Portuguese Government in its renovation.’

The plaque is no longer there and the fireplace stands alone, with nature slowly encroaching into its nooks and crannies. Fresh ash in the hearth shows that must still be used at times, but otherwise the fireplace looks abandonned, a poignant and silent memorial to the impact of the war on the now peaceful Forest. 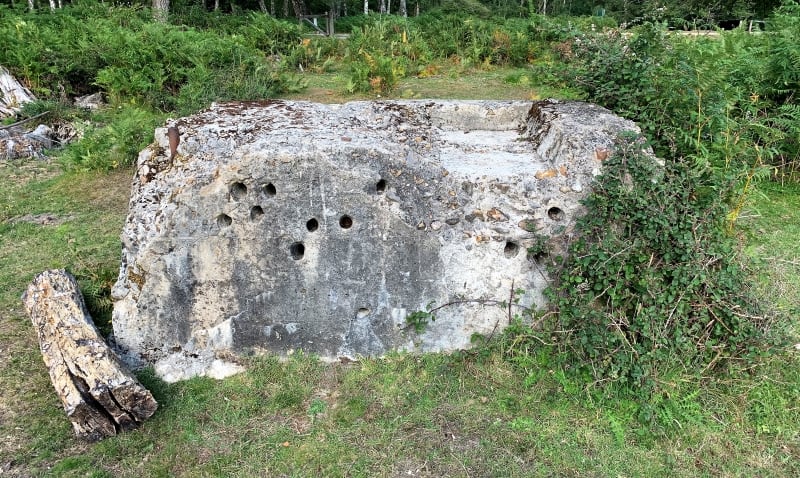 The only remaining evidence of the sawmill is a couple of concrete blocks and rusted pipes.

Where is the best place to park to visit the Portuguese Fireplace?

There is free parking at Millyford Bridge, a car park off the narrow road between Emery Down and the Bolderwood Deer Sanctuary. It is only a short walk to the fireplace.
What3Words: downsize.dumplings.tiger

How do you find the Portuguese Fireplace?

If you park in Millyford Bridge as above, it is just a short walk to the fireplace.
What3Words: trespass.spelling.makeovers

What facilities are there at the Portuguese Fireplace?

There are no facilities at the site, but the nearby village of Emery Down has a traditional 18th century pub, The New Forest Inn, for refreshments. It is a four minute drive or thirty minute walk away. The nearby town of Lyndhurst has plenty of shops and other facilities.

Where is the Portuguese Fireplace?