Salisbury Guildhall, in the Market Square, is the local council building. Built in the 18th century and home to the Oak Court, a replica of the Old Bailey, the building is often open for visitors to pop in and have a quick look around to learn more about Salisbury’s municipal history. Sometimes there are free guided tours which include the jail cells and other areas not normally accessible to the public. 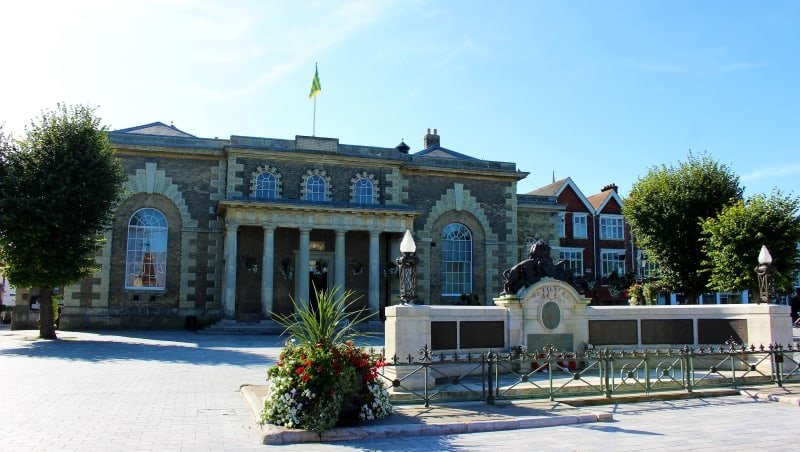 Salisbury’s Guildhall is in the Market Square behind the War Memorial.

Salisbury Guildhall was built in the 18th century, although there has been a building on the site since the early 14th century. The original was built in the early 1300s and was known as The Bishop’s Guildhall, and it was from here that the Bishops would exercise their feudal rights of criminal and civil justice.

In 1585, the Merchant’s Guild built a new headquarters nearby, calling it the Council House. After a mayoral banquet in November 1780, the Council House burnt down. The second Earl of Radnor offered to pay for the construction of a new one, but stipulated that it must be in the centre of the Market Square. His offer was politely refused until he agreed to a different location. After some discussion over which direction the building should face, which the Earl again lost, construction could finally go ahead. 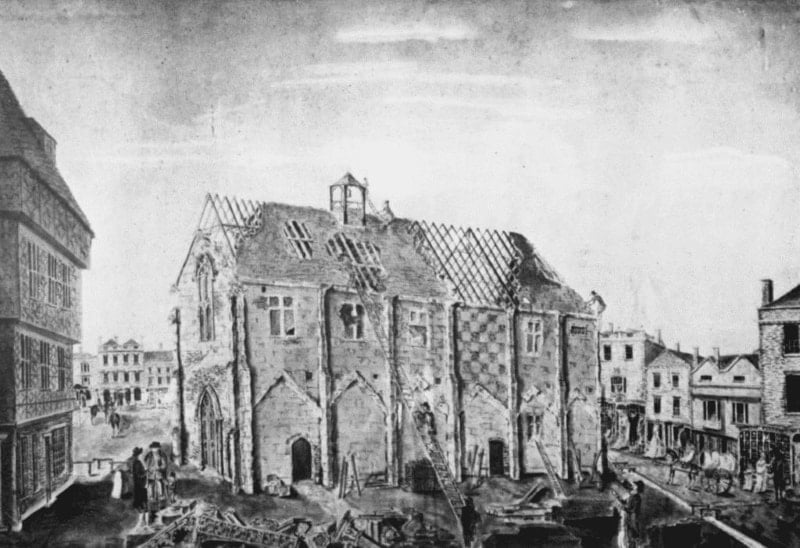 The demolition of the Bishop’s Guildhall.

The opportunity was taken to demolish the Bishop’s Guildhall at the same time; it was in a terrible condition as the Bishop didn’t have the money to pay for its upkeep. The Bishop agreed willingly to the plans, and managed to convince the town corporation that they must include a gaol, allow space to hold the Bishop’s Court, the Courts of Dean and Chapter and the sessions for the Close, with the Bishop having no responsibility for the upkeep of the buildings. Payment to the city Gaoler must be done by the Corporation but only with the Bishop’s approval. In exchange, the Bishop gave up his role as Clerk of the Market, handing it over the city. 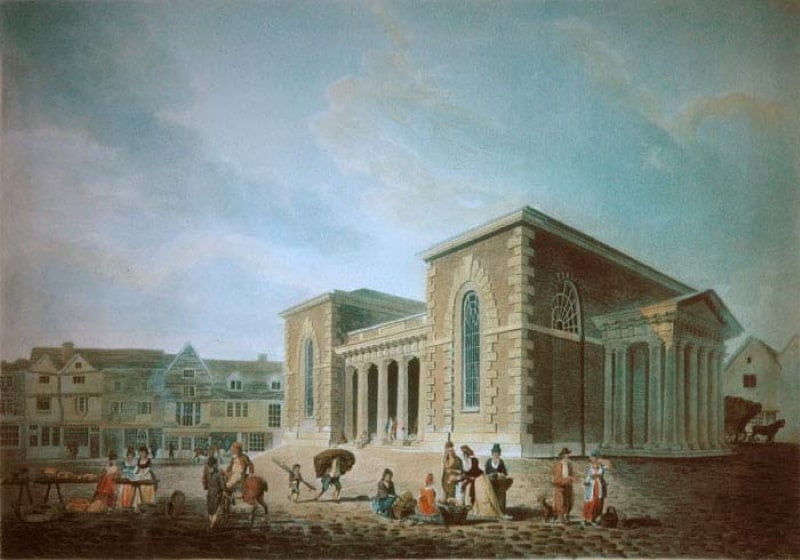 The Guildhall when it had just been built. Sadly the ornate entranceway to the right of the building is no longer there.

In 1795 an Act of Parliament was passed to enable these changes, the Bishop’s Guildhall was demolished and the new Guildhall was built on its site.

Designed by Sir Robert Taylor, it was completed in 1795. Additions and alterations were made over the years, with a grand jury room added in 1829. 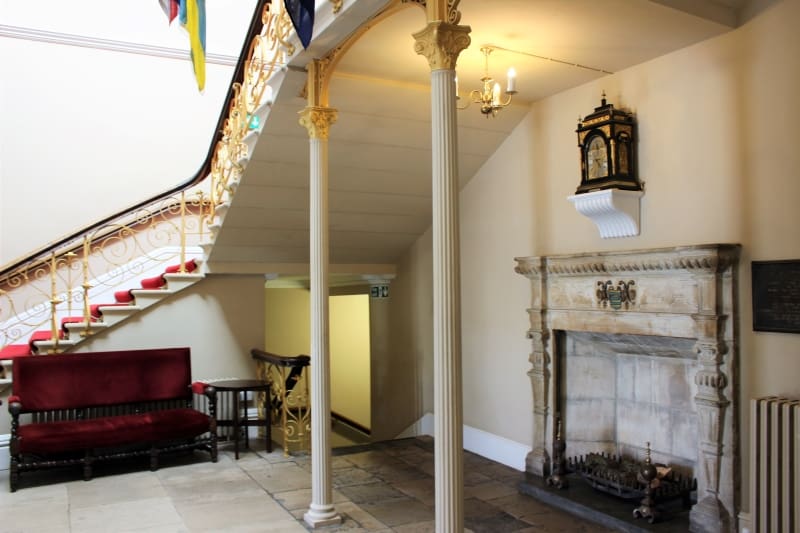 The grand entrance to the building has a sweeping staircase, underneath which is a fireplace which is the sole survivor of the 1780 fire in the Merchant’s Guild.

The banqueting hall is the principal room of the Guildhall and has hosted many important guests over the years, including King George III, Lord Nelson, Princess Diana and the current Queen. The walls are covered with an extensive picture collection, mostly of royalty, benefactors and Salisbury’s Mayors. There are some impressive chandeliers which were once candle powered and which date from 1797. 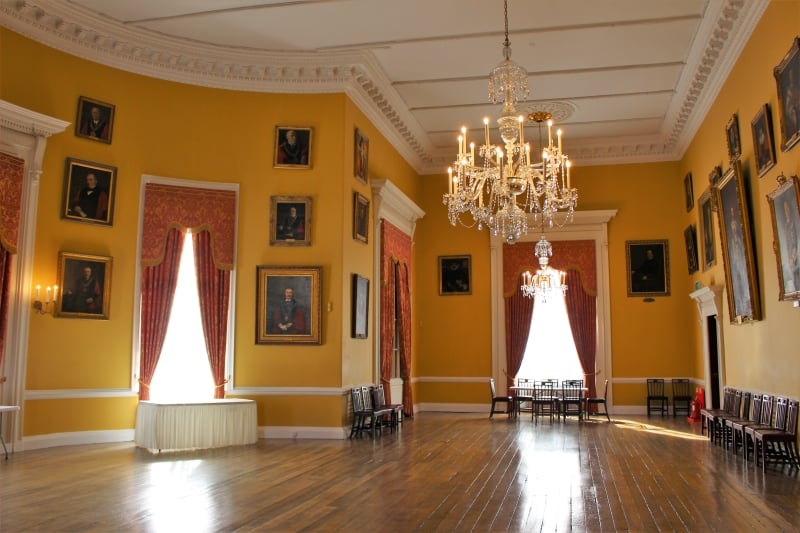 The Banqueting Hall is an impressive room with an extensive picture collection. 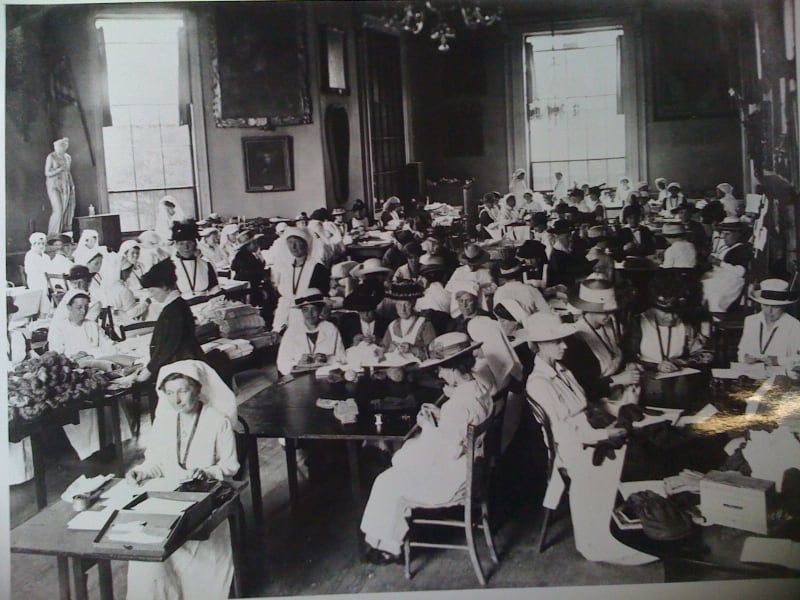 Ladies of the Queen Mary Needlework Guild making uniforms for the military at a sewing party in the Banqueting Hall during World War I.

The Crown Court dealt with all court matters from 1795 – 2010. Now cleared of all of its court room furniture and tiered seating, the room has been re-designed to allow it to be used for Council functions. The trap door in the floor is now sealed but it was through here that the accused would ascend some very narrow stairs to the dock, to appear before the judge. Many would then have to return back down those stairs to the tiny gaol cells which are below. 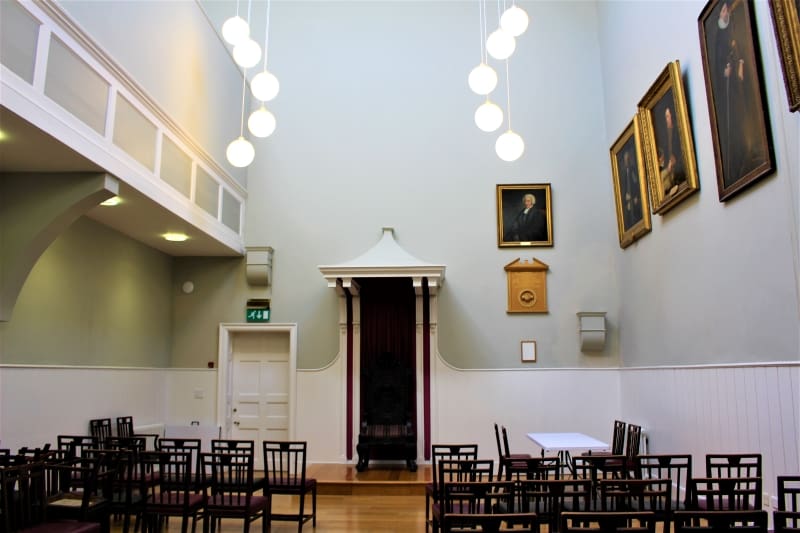 The Mayor’s Chair is still the centrepiece of the Crown Court. Crafted in 1796 and made of carved mahogany, it was sat on by George III when he visited Salisbury.

In January 1831, 339 cases from the Agricultural Swing Riots, a widespread revolt against harsh conditions and increased mechanisation of agriculture, were heard here, which resulted in 150 people being transported to Tasmania and two death sentences, which were later reprieved.

It was also here that William Wright was sentenced to death, the last execution in nearby Fisherton Gaol in 1855. He had killed his common-law wife when she said she was going to leave him for another man, cutting her neck with a razor. He then turned the razor upon himself, cutting his throat but surviving. Newspaper reports say that when he was hanged, his wound re-opened, making it a particularly grisly sight. 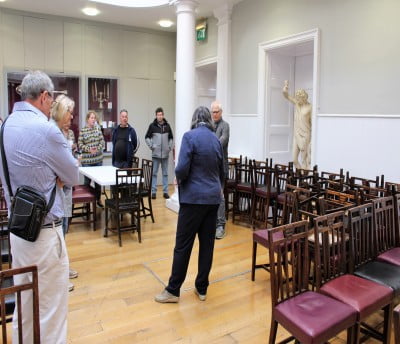 The tour guide in the centre of this picture is standing on the trap door that led to the jail cells. It led straight up to the dock. 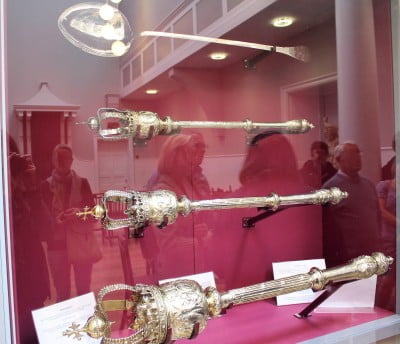 The Three Maces are still used for ceremonial occasions. Above is the basting spoon made for the Diamond Jubilee of Queen Victoria in 1897 and was used for basting an ox which was roasted in the Market Square.

The room now contains some of Salisbury’s silver collection, including three George II silver maces. These were commissioned in 1749 and are unique in England. The largest mace is the second biggest in the country. It is also here that you can see the Victoria Cross of Thomas Adlam. This is the highest and most prestigious award for gallantry in the face of the enemy that can be awarded to a soldier. He lived in 2 Farley Road in Salisbury and received the medal for his actions in 1916 in the Somme, when he ‘rushed from shell hole to shell hole under heavy fire … was wounded in the leg but nevertheless, … captured the position and killed the [enemy] occupants.’ 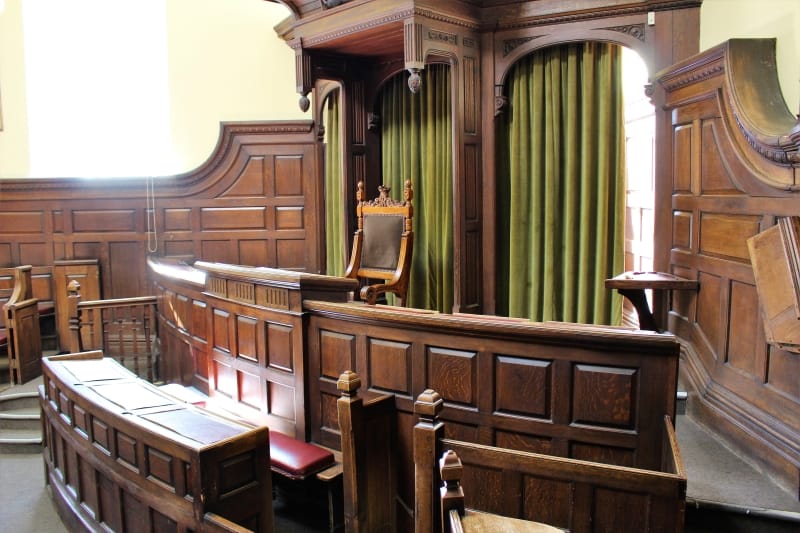 The Oak Court is a replica of the Old Bailey and was designed on the diagonal for maximum capacity.

The Oak Court is modelled on the Central Criminal Court of England and Wales, otherwise known as The Old Bailey. This court is exactly how you imagine court rooms to be based on every courtroom drama you may have seen on TV. With oak furniture throughout, a grand judge’s chair and an elevated dock for the accused, this is very impressive room. Used until 2010 as a Magistrate’s Court, it is now host to meetings and marriage ceremonies.

In 1827, Justice Park sentenced 28 people to death in this room; one of them just for the crime of stealing half a crown. All but three were eventually reprieved. He gave one 18 year old lad, life transportation for stealing a pocket handkerchief. In 1830, in the Salisbury Spring Assizes, Justice Gazalee addressed the Grand Jury saying that none of the crimes appeared to be ‘marked with circumstances of great moral turpitude.’ Nevertheless, of 130 prisoners he sentenced 29 to death, life transportation on five, 14 years on five, seven years on 11 and hard labour on the rest. 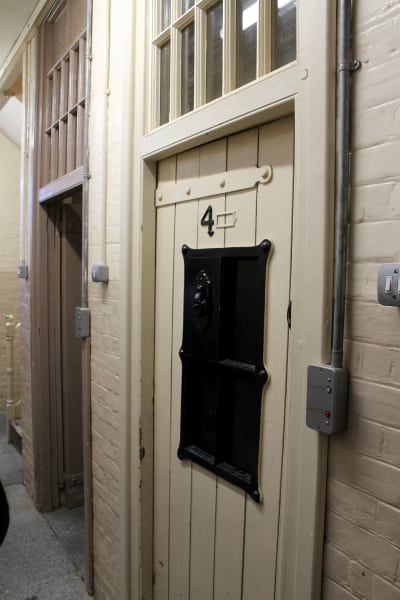 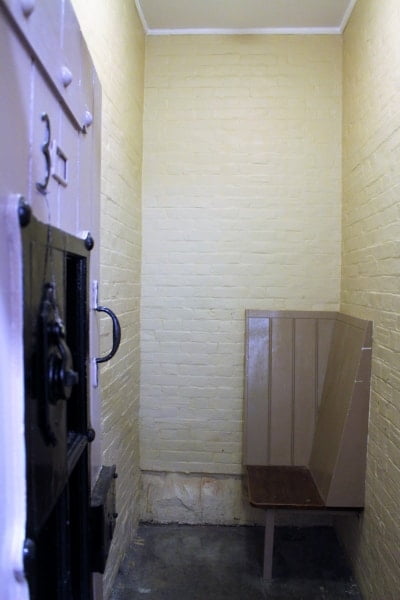 The jail cells are tiny and only have space for one small and uncomfortable looking seat.

The cells are below the main court rooms. There were originally two tiers of cells, one for men and one for women, but the ones for women have now been converted into council offices. What remains is the lower level of cells, four tiny rooms which lead off the lower tunnels. Used until 2000 they are no longer in use as they contravene all sorts of rules and regulations for the treatment of prisoners. They are said to be haunted and people have reported hearing the jangling of keys and footsteps in them.

Events for the public are often held on Saturdays